The last State of the European Union by Juncker, the triggering of art. 7 TEU, and the victory of the coalition advocating for stricter copyright rules in the digital single market are all delved into by our experts in this report. Additionally, we show who EU experts "think" and "hope" to see as Commission President next year.

Key questions whose answers you will find in this report:

- EU affairs experts expect Manfred Weber to win the EC Presidency race, but if they could choose, they would prefer another person. Find out who!

- Funnily, Nigel Farage has been named as “the MEP who will be missed the most”. Which other MEPs top this list?

- Copyright rules in the digital single market: which S&D delegations had a change of heart (read: votes) during the summer and swung around the outcome? What are the red lines of each national delegation?

- Who can Orban still rely on in the EPP and what can he do after the elections?

- Which CEE MEPs were the kingmakers on the dual-quality rules?

- Which fringe parties were the kingmakers to insert forest-based protectionism in trade agreements and to put a ban on toxic pesticides?

- Which EPP MEPs defected to give the majority to the left on a call for companies to hold and pay for mandatory sexual harassment training for their employees?

- Which conservative MEPs sided with the left to argue that droughts and forest fires can be prevented, and which said they’re inevitable?

The next President of the European Commission is likely to be affiliated to centre-right wing EPP, according to a majority of respondents (76%) coming from the "Brussels EU affairs bubble". This does not come as a surprise as the EPP party is likely to remain the largest group after the elections next year. From among the EPP candidates, Bavarian Manfred Weber is now deemed to be the most likely to get nominated as Spitzenkandidat by his EPP colleagues and become the next President of the European Commission after the elections (39% of respondents). 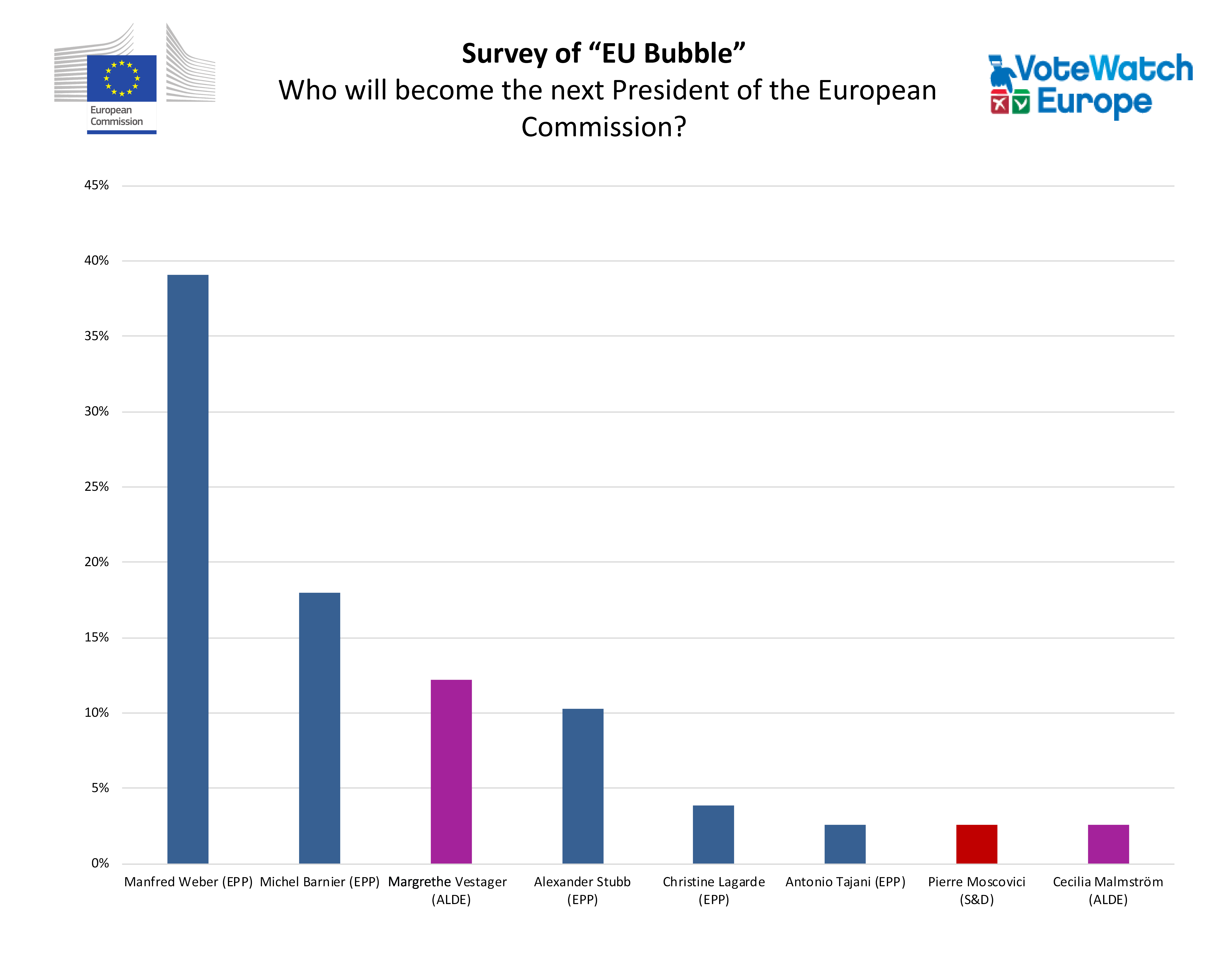 His potential competitors are still trailing behind. The odds of French Michel Barnier decreased dramatically over the last few months (down to 18% of respondents), as the Brexit negotiations keep dragging on, preventing him from starting his (potential) electoral campaign. Finnish Alexander Stubb has some chances, according to over 10% of respondents, although he is still far from being able to threaten Weber's dominant position.

When looking at the other political families, the only serious contender so far is deemed to be the current Commissioner for Competition, Margrethe Vestager (ALDE - Denmark). Her name was indicated by 12% of respondents. The Danish politician could benefit from the support of French President Emmanuel Macron. She could also be the favorite candidate of those who want to strip the EPP off the Presidency of the Commission, although this might require ditching the Spitzenkandidaten process.

While EU professionals expect the EPP to retain its control of the Commission, our respondents' ideal scenario is quite different. In fact, only 6% would like Manfred Weber to become President, whereas their "hearts" lie with potential ALDE candidates. Overall, almost 48% of respondents would like a candidate from ALDE to become President, with Margrethe Vestager being the favorite of a plurality of respondents (35%). Such large support for a social-liberal candidate is not surprising given the socio-demographic profiles of the EU practitioners, but also provides some hints on the high level of popularity of the Competition Czar (as Vestager is often referred to). 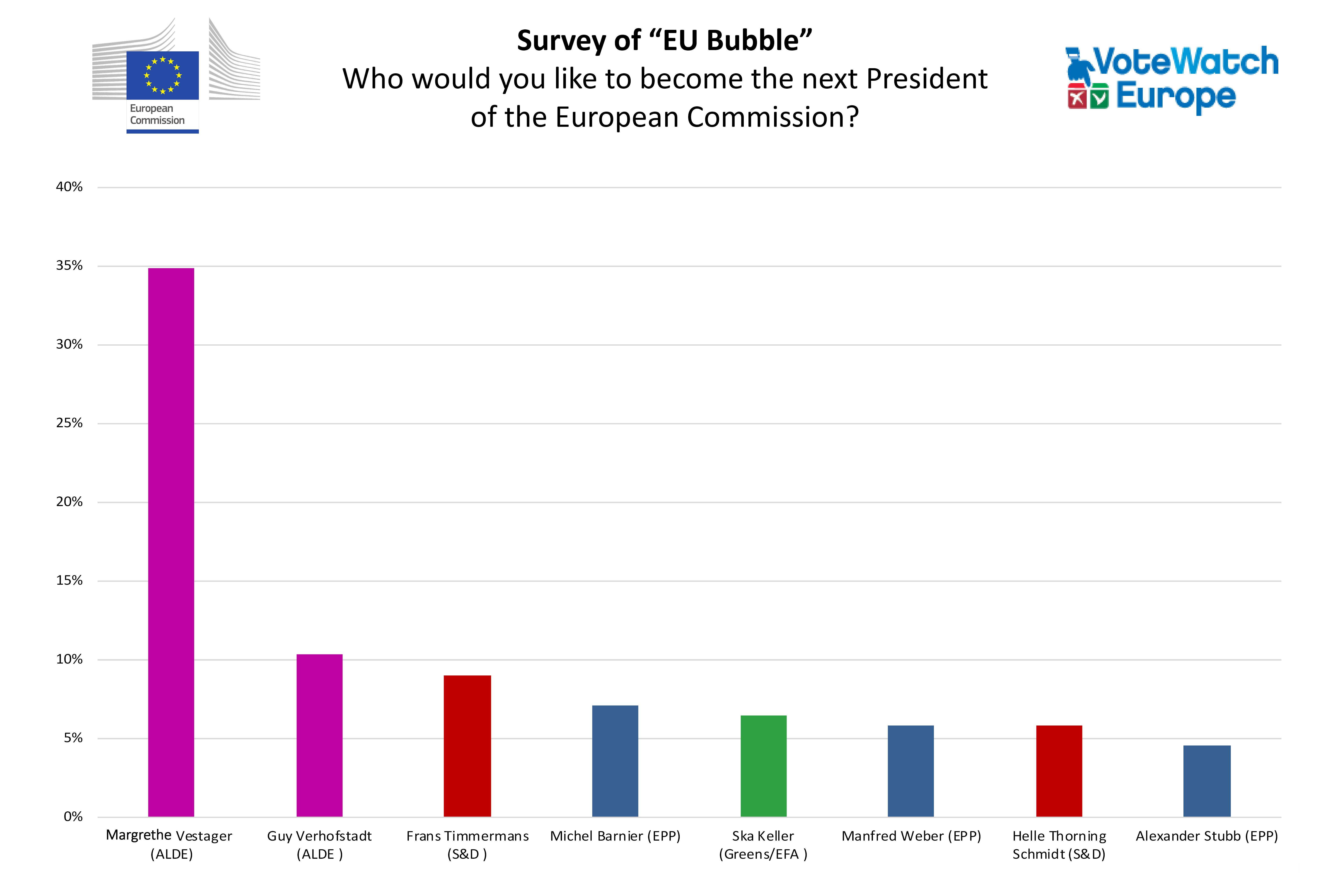 ALDE's leader, Belgian Guy Verhofstadt, is also high in the preferences of our respondents (10%), whereas Frans Timmermans is the preferred politician from among S&D potential candidates. The top 5 is closed by French Michel Barnier (the most preferred potential candidate from the EPP) and Green co-chair Ska Keller (who was already the Spitzenkandidat of the European Greens in 2014).

These preferences and expectations, however, need to be taken with a grain of salt: back in 2014, less than 20% of "EU bubblers" thought (and probably even fewer hoped) that Juncker will become Commission President, even after he had become EPP's spitzenkandidat. It'll be interesting to see if, based on that experience, the Brussels' EU affairs community  has improved its reading of the likely developments.

Survey: Manfred Weber also the favorite to land the EP Presidency, Nigel Farage to be missed the most

Quite interestingly, EPP leader Manfred Weber is also the favourite to succeed Tajani at the helm of the European Parliament next year (30% of respondents). Most respondents seem to expect that, in case the Bavarian falls short of gathering enough support to take over the Commission, he could land the Presidency of the Parliament as a result of a compromise between the different political families (Weber was also the favorite to become the next EP president according to our previous survey this spring). 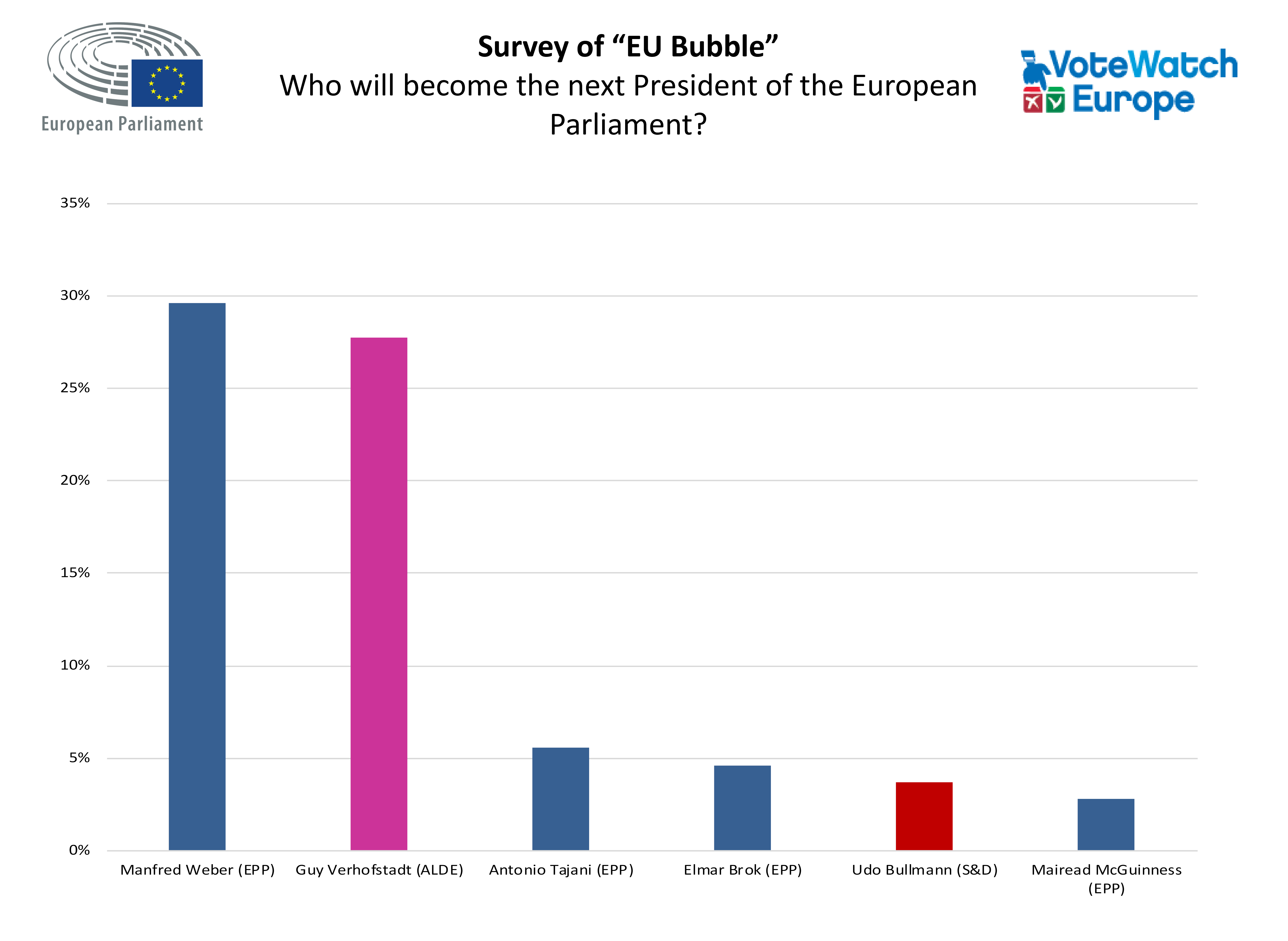 In such a case, his main competitor would be the outspoken leader of the ALDE group, Guy Verhofstadt (28% of respondents), who is currently the leading Brexit negotiator on behalf of the EP. Other potential options include: current EP president Antonio Tajani (EPP), German Elmar Brok (EPP) and German Udo Bullmann (the current leader of the S&D group).

Despite their warm support for the EU integration project, some respondents will miss the bombastic Eurosceptic leader, Nigel Farage, once he will leave the European Parliament. In fact, his name tops the list of the MEPs who will be missed after next year elections (9% of respondents). The co-chair of the Greens/EFA group, Philippe Lamberts ranks second as the MEP to be missed the most next year (7% of respondents). However, happily for his fans, the Belgian politician recently announced his decision to run again next year. This special top 3 is closed by Portuguese Ana Gomes (Socialist Party-S&D), who was mentioned by 3% of respondents.

To access the rest of our PRO intelligence report you have to be a PRO subscriber. If you don’t have an account or you have specific questions, drop us an email at [email protected]

This analysis is part of VoteWatch Premium Service. To read the full analysis you need to log-in with a PREMIUM account. If you don't have one, contact us at  [email protected]