Home Votewatch » Will the new chair of IMCO increase ECR’s leverage in the committee? 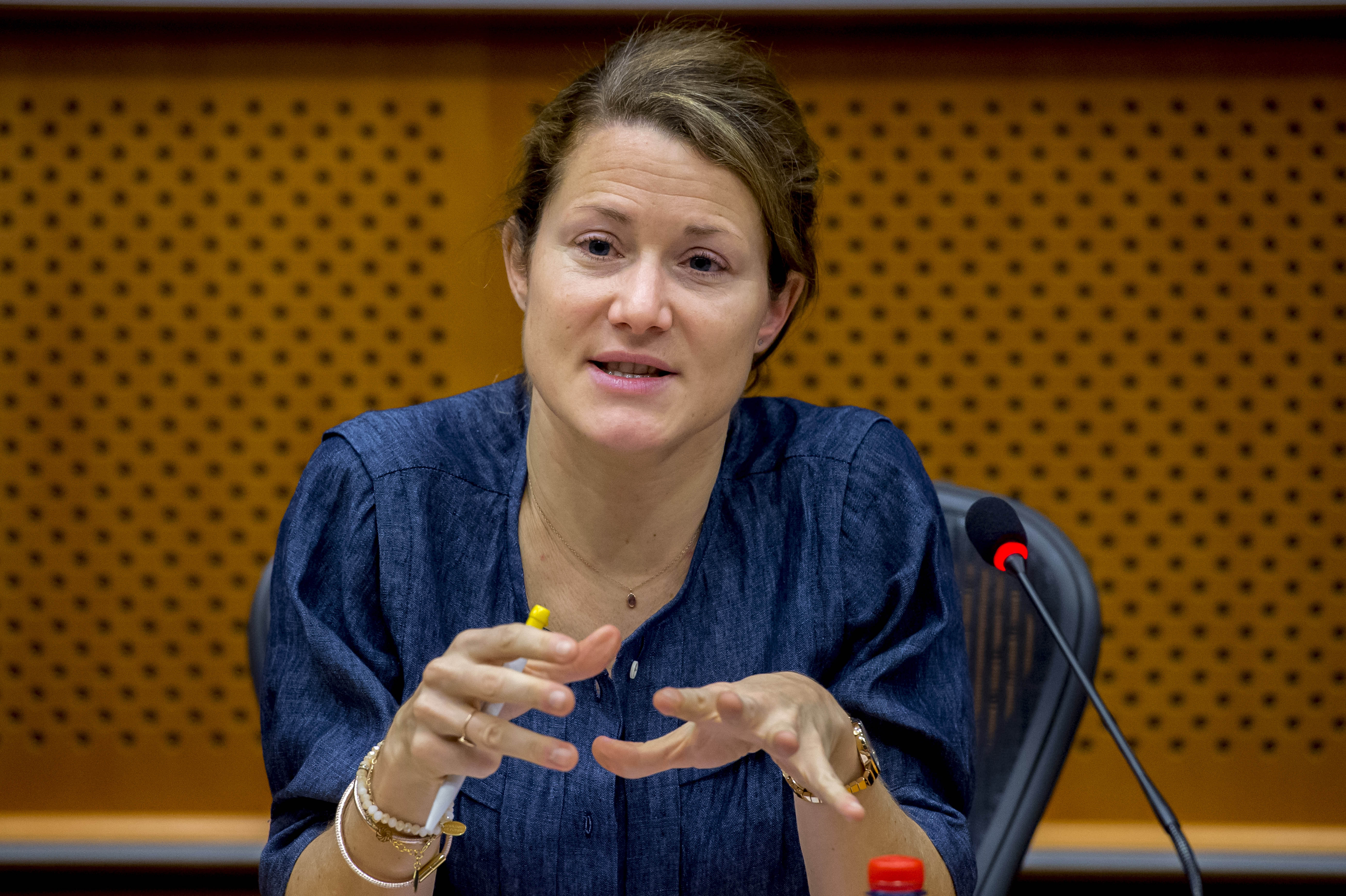 Anneleen Van Bossuyt, Member of the European Parliament and a rising star in the Belgian New Flemish Alliance, is the new Chair of the Committee on the Internal Market and Consumer Protection (IMCO). Our analysis of her political record indicates that she is well-positioned to recover some of the influence lost by the ECR group due to the Brexit process. There are relevant differences between her and her predecessor: for example, unlike Vicky Ford, Van Bossuyt and her party supported stronger sanctions against cheating car manufacturers.

Since IMCO deals with the rules governing the free movement of people, goods, capitals and services, this influential committee is particularly important to Van Bossuyt, her political group and the Parliament as a whole. Van Bossuyt started as a researcher for the party N-VA in 2010 and became a Member of the European Parliament in 2015. The former IMCO chair, British Conservative MEP Vicky Ford, is one of the four British MEPs leaving Brussels after being elected to the House of Commons. Van Bossuyt will play an important role within the committee when it comes to setting the agenda and speeding up or slowing down legislation.

As the IMCO committee deals with the Internal Market, possibly one of the hottest issues in the Brexit negotiations, the importance of its chair cannot be overstated. Coincidence or not, IMCO is one of the areas where the ECR group has the highest rate of success in pushing its views through. However, ECR’s influence in this area has decreased substantially in the past years, a development which can be partly attributed to the drift between the UK and the EU.

The infographic belows shows the areas where the ECR group has had the biggest success rate:

What are Van Bossuyt’s views on the Internal Market?

In order to understand the actual views of the politicians, it is essential to look at how they vote, rather than only analysing their speeches, which are often carefully-crafted and intentionally vague. It is when they have to make a decision, ie. to cast his/her vote in favour or against a resolution or an amendment that we know which arguments have weighted more and have eventually succeeded to shape that MEP’s views.

The infographic below shows a few examples of positions taken, based on actual votes cast in the European Parliament, by Anneleen Van Bossuyt, compared to her predecessor, Vicky Ford. It also shows what the majoritarian position in the ECR group has been. 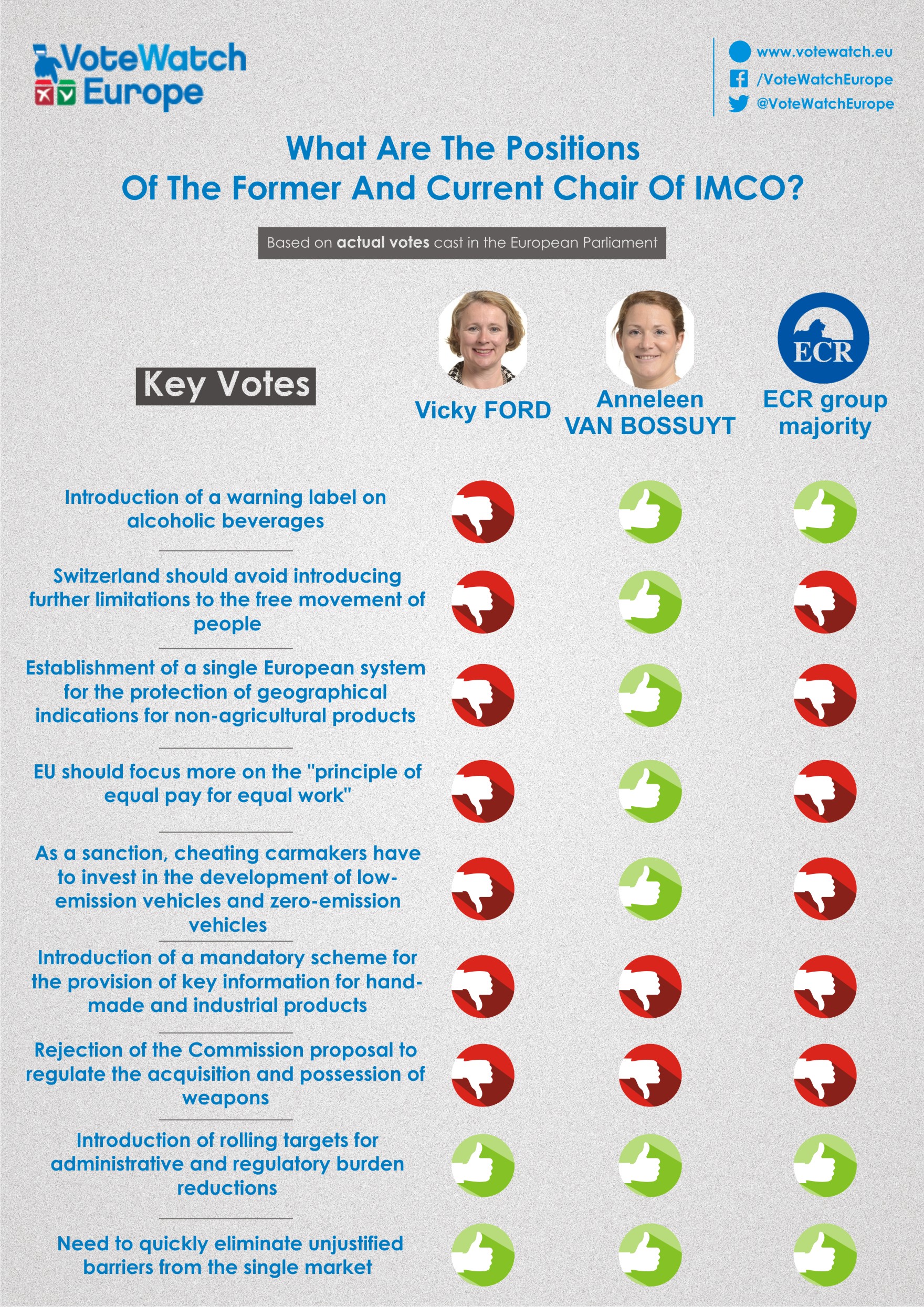 Van Bossuyt and Ford are both in favour of diminishing administrative and regulatory burden for businesses, but also of eliminating barriers from the single market.  Both of them voted against the introduction of a mandatory scheme for the provision of key information for hand-made and industrial products.

However, there are also relevant differences between the two Conservative chairs. Vicky Ford was more supportive of deregulation and free-market policies than the Flemish politician, in particular when it comes to consumer and environmental protection. During the votes on Dieselgate, Van Bossuyt and her party supported stronger sanctions against car manufacturers, whereas the majority of ECR took a more moderate stance.

Our voting record also shows that Van Bossuyt has a more “continental” perspective on the freedom of movement than her former British colleague. When voting on trade relations with Switzerland, Van Bossuyt defended the integrity of the Internal Market vis-à-vis potential limitations to the freedom of movement of people. Contrary to Van Bossuyt, Ford and most other ECR-members voted against the resolution that included a paragraph pointing out that Switzerland should avoid introducing further limitations to the free movement of people.

Chairwoman Van Bossuyt seems to be closer to the centre of the political spectrum on internal market rules. This might also benefit her political group, since ECR’s influence on this policy area has declined steadily when compared to the previous term (as shown by the infographics below). This is due to a shift to the right of the Conservative group since the last European elections: ECR’s “cooperation” with the centrist political groups fell during the current Parliamentary term (in particular with the Liberals of ALDE). Although the chair of the committee operates in a neutral capacity, Van Bossuyt’s moderate stance (instead of the profound belief in the free market of Vicky Ford) could improve the leverage of ECR within IMCO. 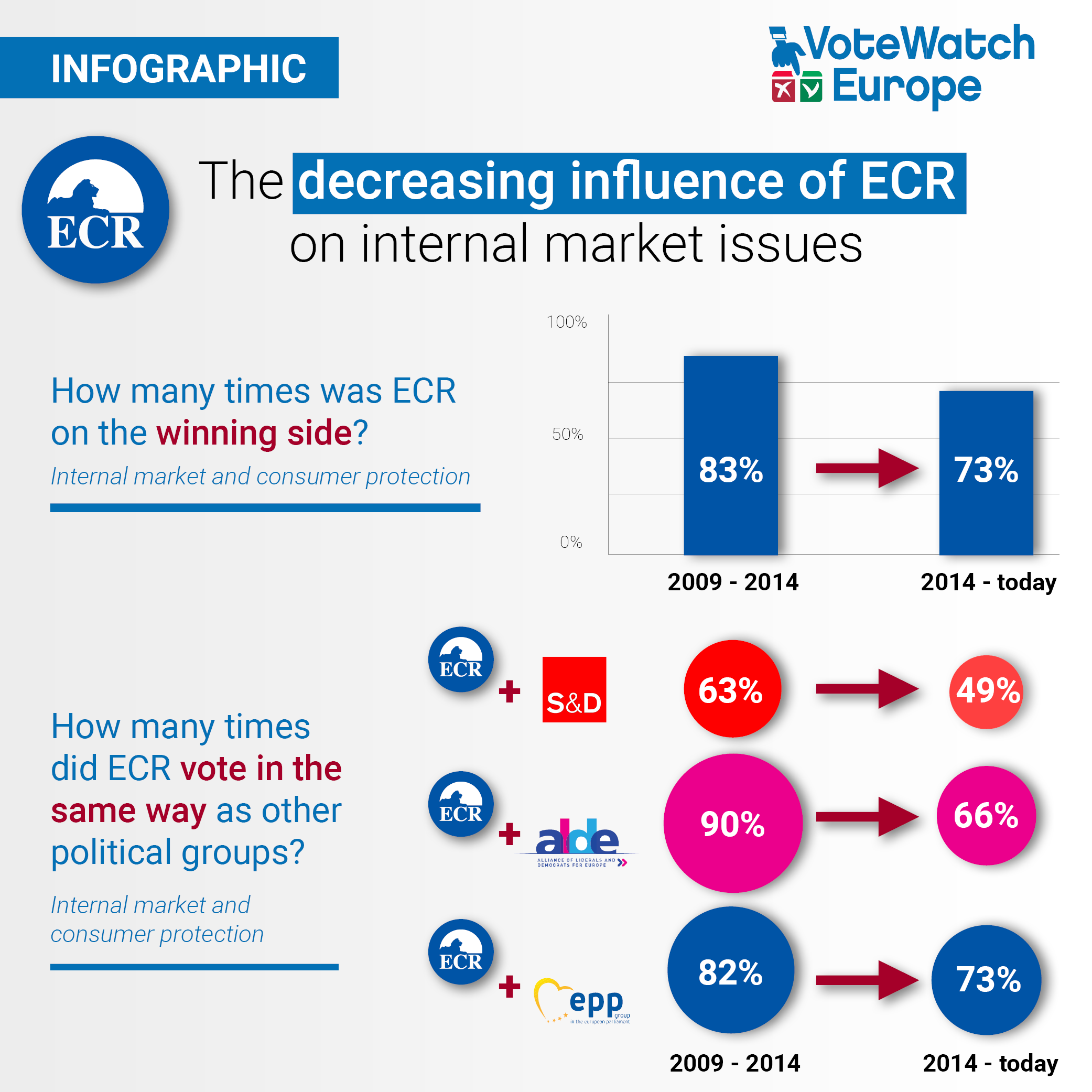 Anneelen Van Bossuyt, one of the most influential Belgians

Van Bossuyt’s election as chair of IMCO is confirming her ascending path that we have signaled already in our reports that looked into the influence of each MEP: in previous reports we showed that Van Bossuyt was the most influential Belgian MEP on digital and communication policy (report), and she ranked third in our assessment on influential Belgian MEPs on energy policy (report). Among others, she has been rapporteur on the report ‘Towards an improved single market regulation’.