The astonishing result of the recent American Presidential election still reverberates across Europe and the World. Donald Trump has been seen by most foreign policy experts as an isolationist, who will (partially) withdraw the US from the realm of international diplomacy. Some European leaders have immediately indicated that this is a clear signal that the EU should get its act together and start to exert real leadership at a global level. This analysis shows why Central Asia is one of the Areas where the EU can reap the benefits of a stronger engagement with the countries in the region.

The EU is currently engaging with international actors in many parts of the world through various instruments, from development cooperation with Africa, to setting up comprehensive trade agreements with the United States, Canada, Japan or Australia. However, the Eurasian supercontinent poses the greatest foreign policy and security challenges. The geopolitical landscape in this part of the world changes rapidly, as relations take sudden twists: Turkey strengthens its collaboration with Russia, while the EU promotes warmer relations with Iran. Furthermore, China is reasserting its power and aims at expanding its influence both by sea and by land towards Europe. While European leaders have kept a close eye on the big players, they seem to have overlooked smaller, more silent, but key actors: the Central Asia Republics. Given the changing alliances and balance of power, their role requires a fresh analysis.

The recent death of the Uzbek President, Islam Karimov, has drawn some attention to the country and the tensions in the region as a whole. Central Asia is becoming more and more relevant for the EU, mainly due to its strategic position. The three most important aspects that have characterised the existing relationship between the EU and the five Central Asian countries are the fight against terrorism, economic relations, and concerns about respect of human rights.

The importance of Central Asia is without doubt emphasized by the fact that the area is key for maintaining the stability of the Eurasian continent, as it is in the middle of changing balances between Iran, Turkey, Russia and China. Moreover, Tajikistan, Uzbekistan and Turkmenistan share the border with Afghanistan and are continuously at risk of becoming a target for Islamic militants.

It is, therefore, crucial for the European Union to maintain a close relationship with these five countries, also considering that the region is becoming a vital area for the global energy market as a source of gas and oil, which attracts many foreign investors. For instance, China’s ambitions in the area are guided by energy interests, as pipelines in Turkmenistan and Kazakhstan supply the country with gas and oil. Russia’s influence, on the other hand, is exerted through the Eurasian Economic Union (EEU) which includes the countries of Kazakhstan and Kyrgyzstan. 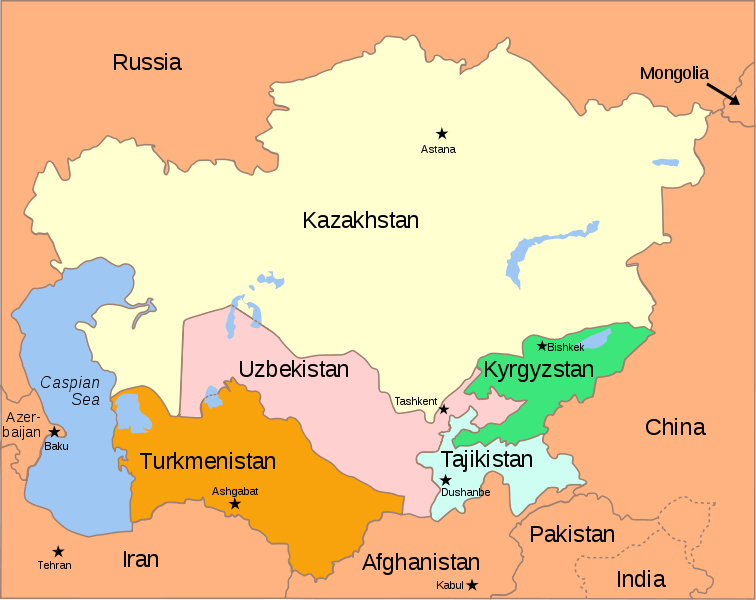 The main channels through which the EU has been exerting its influence in the region reflect the three key aspects which constitute the basis of the partnership with Central Asia: trade, the threat of Islamic extremism, and rule of law. However, as stated in the EU’s main framework for dealing with this area, called Central Asia Strategy for a New Partnership, security cooperation is also envisaged.

The core instrument of this strategy is the Partnership and Cooperation Agreement (PCA), which aims at maintaining a political dialogue, as well as developing trade and investments. In 1999, the PCA with Kazakhstan, Kyrgyzstan, and Uzbekistan was ratified and in 2010 Tajikistan joined the agreement.

In practice, the most important aspect through which the EU can have a visible and direct impact on Central Asia is trade, which has a huge and increasing potential. Notably, the EU is Kazakhstan’s largest trading partner, especially importing gas and oil. The close relationship between Kazakhstan and the EU is emphasized by the signing of an Enhanced Partnership and Cooperation Agreement, initiated in early 2015. The agreement is aimed at increasing trade and investments between the two regions as well as enhancing the country’s social and political development. As Federica Mogherini, High Representative for Foreign and Security Policy and Vice-President of the European Commission, said: “The new agreement will give a significant boost to economic and political ties between the EU and Kazakhstan”. The EU has also been a strong supporter of Kazakhstan’s accession to the WTO (Kazakhstan become WTO member in 2015). In fact, the accession of the whole Central Asian area to the WTO is part of the EU’s Strategy for Central Asia.

Moreover, the EU is also an important donor in Central Asian countries and is crucial for the economic development of the poorer states of the region, especially Tajikistan, Kyrgyzstan and Uzbekistan.

Providing international aid in addition to promoting trade has certainly helped the 5 Central Asian countries increase their GDPs and develop economically in the recent years. Kazakhstan is the region’s largest economy and has also been experiencing an increasing flow of foreign investments, thanks to its booming oil and gas sector. In addition, since the country became an upper middle income level economy, it is no longer part of the EU’s Generalised Scheme of Preferences, unlike the rest of its neighbours. The scheme is aimed at developing countries and allows them to benefit from paying no or partial duties on their exports to the EU.

However, compared to Kazakhstan and Turkmenistan, the rest of the countries have limited trade ties with the EU and are more oriented towards China, Russia and Turkey.

The Eurasian Economic Union, which for now includes only two Central Asian countries, Kazakhstan and Kyrgyzstan, allows the free flow of goods and capitals between the members. Russia is hoping to expand the membership of the EEU to the rest of the countries in the region, as it is a way to exert its economic influence in the area.

Importantly, the EU’s dependence on Russia when it comes to energy resources might be reduced in the future as the Central Asian countries could become relevant suppliers for the Member States. As for now, the area is exporting mainly crude oil, gas, metals and cotton fibre to the EU.

Notably, there is a project to build a Trans-Caspian Gas Pipeline which would connect Central Asia   through Turkmenistan (also possibly Kazakhstan) to Azerbaijan and then to Europe. This project is perceived as an opportunity for Europe to diversify the sources of energy supplies and decrease its reliance on Russia’s imports. Consequently, the project itself has not been seen favorably by Russia as well as Iran, which would like to be more involved in the project.

Currently, most of the Members States rely on the European institutions for relations with the 5 Central Asian countries. Among these, Kazakhstan seems to be the most interesting to the Europeans, as 21 Member States maintain embassies there, while there are only 11 embassies of EU Member States in Uzbekistan, and just 5 of them have embassies in Turkmenistan. Notably, only Great Britain, France and Germany have embassies in Tajikistan and Kyrgyzstan.

However, despite the growing relevance of the region for Europe and the opportunity for the European institutions to take the lead, the EU has not been very active in the area. One explanation for this is the difficulty to successfully engage with countries whose political regimes are very different than European ones. In the West, diplomats are put under pressure by various civil society groups which would like the EU and the US to project their own values onto third countries, before strengthening diplomatic and economic relations with them.

In this case, all 5 countries are classified, according to the Freedom House, as “consolidated authoritarian regimes.” As shown by debates in the European Parliament, ideology divides the political forces: the leftists believe that this is reason enough to keep a safe distance from the region. On the other hand, the center-right argues that, however, the West should be less demanding of these countries that have a different tradition and culture than our own. Also, the camp advising for friendlier relations with Central Asia highlights that one should also take into account that these countries find it increasingly difficult to maintain the stability and cohesion of their societies, given the pressure towards radicalization triggered by the Syrian conflict. Hence, their inclination towards a “strong-hand” leadership style comes as a reaction to the regional and cultural context.

Taking into account the most recent political developments in the US, slow growth of the European economy and increasing security concerns, Europe is unlikely to count on an American “idealistic-oriented” position; hence the balance of power among the Western decision-makers is highly likely to shift in favour of those who prefer a more pragmatic approach towards the region.

The recent resolutions of the European Parliament are giving the signal for strengthening the visibility of the EU in the area and for closer cooperation. Overall, the majority of EU Parliamentarians tended to be supportive of improving the relationship with CA countries.

One of the votes that created division was on the accession to the GSP +, which is a variant of the GSP Scheme. It includes the total removal of tariffs on the same products as those mentioned in the GSP, but it can be granted only to countries that ratify and implement core international conventions regarding human and labour rights, the environment, and good governance.

In particular, MEPs voted on a paragraph welcoming the accession of Kyrgyzstan to GSP+ and encouraging Tajikistan and Uzbekistan to follow its example (while Kazakhstan no longer needs such a system since its economy is much more developed). The votes saw a clear division between the European political families.

On one hand, a comfortable majority formed by pro-free market groups, ALDE, ECR, the EPP, as well as the center-left political faction S&D expressed its support. The opposing forces were made up of the Greens, hard leftists, and nationalists. Importantly, all the politicians belonging to almost all current governments across the EU Member States voted in favour of warmer relations with CA.

This all shows that there is substantial political support for the EU to become more present in the area, as these countries are becoming more and more relevant to European interests. Especially after the US elections, and just as in the case of the relationship with Iran, the Europeans find themselves in the position of deciding whether to take leadership and engage with Central Asia through a constructive and comprehensive dialogue, based on a long-term vision and involving cooperation on trade, foreign policy and security matters.

As the High Representative/Vice-President Federica Mogherini concluded, following the EU-Central Asia Ministerial Meeting: “Only through a strengthened cooperation can we solve some of the challenges we have and take full advantage of the many opportunities our regions have. We can state that there is a renewed interest in the area, of which the challenges, which impact European interests, make it an increasingly valuable partner.”

For more analysis of EU decision-making, contact us at [email protected]

Related analysis: EU votes to step up measures to counter Russian propaganda, but Southern Europeans do not agree