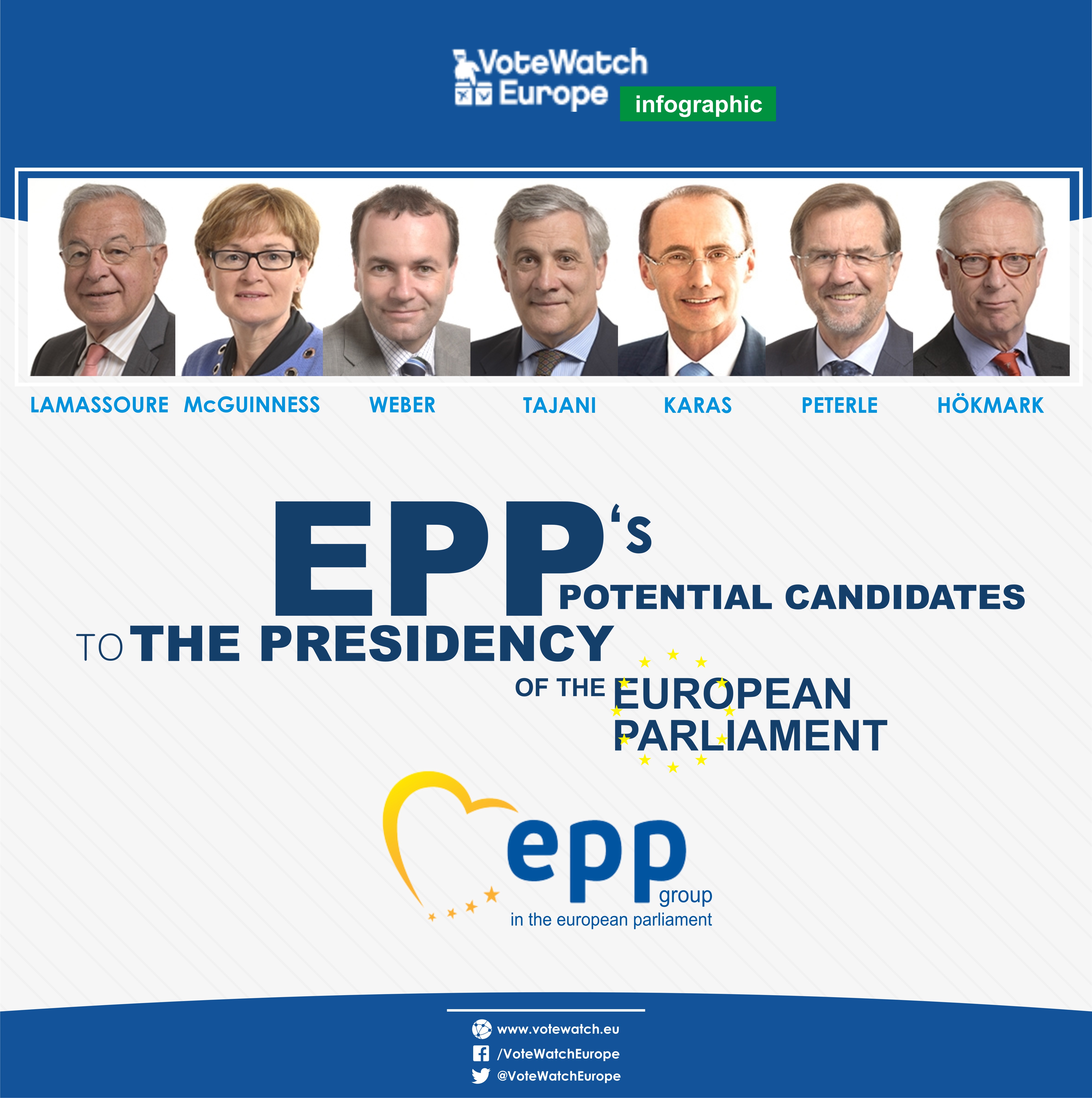 Note: this analysis, originally published in October, was updated to take into account the latest developments up to 24 November 2016.

Who will replace Schulz ?

The decision by Martin Schulz not to seek a third mandate as the President of the European Parliament cast uncertainty on the future direction of the institution. The top European People’s Party and Socialists leaders might have felt comfortable keeping Schulz as EP President, while Tusk is reelected Council President next year, in order to avoid rocking the European boat during these difficult times. However, with the departure of Schulz from Brussels, EPP MEPs are now very likely to put one of them at the helm of the European citizens’ institution and top-notch Members are already working to rally support for their candidature. So, who will actually replace Schulz?

Despite being the largest directly elected legislative assembly in the world, not many people outside Brussels know about the political developments in the EP. In order to strengthen European democracy, it is fundamental that the citizens are aware of the EP presidential race, as this European institution directly represents their interests. In particular, the President of the European Parliament contributes to setting the overall direction of the European project.

For this reason, our study sheds light on this democratic exercise and highlights what the main candidates stand for. The analysis also aims to understand which candidates have better chances of being elected as EP President while competing against the candidates put forward by the other political groups.

Since they are part of the same political family, which is in general rather cohesive when voting on European issues, the differences between candidates are not frequent. However, there are some key issues where the views of the EPP candidates differ and these apparently small differences can be decisive when the EPP Members, and the members of the other political groups, will decide who to vote for.

As a note, it has to be noticed that there are not formal candidatures yet and the politicians included in our list were selected on the basis of insights from the EP and media sources. This means that changes are still possible and that this analysis will be updated in the case that new candidatures arise.

Who are the candidates from the EPP?

One of the most mentioned candidates for the Presidency of the European Parliament is a member of the French Republicans, Alain Lamassoure. He is particularly known for his role as chair of the Special Committee on Tax Rulings and Other Measures Similar in Nature or Effect.

Another well-known candidate is Mairead McGuiness, Irish member of Fine Gael. She is one of the Vice-Presidents of the European Parliament and, in particular, she is in charge of the information and communication policy of the assembly.

A Slovenian MEP, Alojz Peterle, has also been circulated as a potential candidate from the EPP. In the EP, the member of the New Slovenia – Christian Democrats is the current chair of the delegation to the Former Yugoslav Republic of Macedonia.

Another potential candidate comes from the Swedish Moderate Party, Gunnar Hökmark. He is the head of the Swedish delegation in the EPP.

Finally, yet importantly, the current chair of the centre-right political group, the German Manfred Weber, might turn out to be found as the right candidate for the job. Before being elected as the leader of the political group, the member of the Christian Social Union was one the Vice-Chairs of the EPP over the previous term.

What are the positions of the candidates on key policy issues and what allies do they have?

In order to better show the differences between the potential candidates, we analysed how they voted on some of the key issues during this Parliamentary term. It should be noticed that, being members of the same political groups, these MEPs voted in the same way most of the time. For this reason, we focused on the most divisive policy issues. 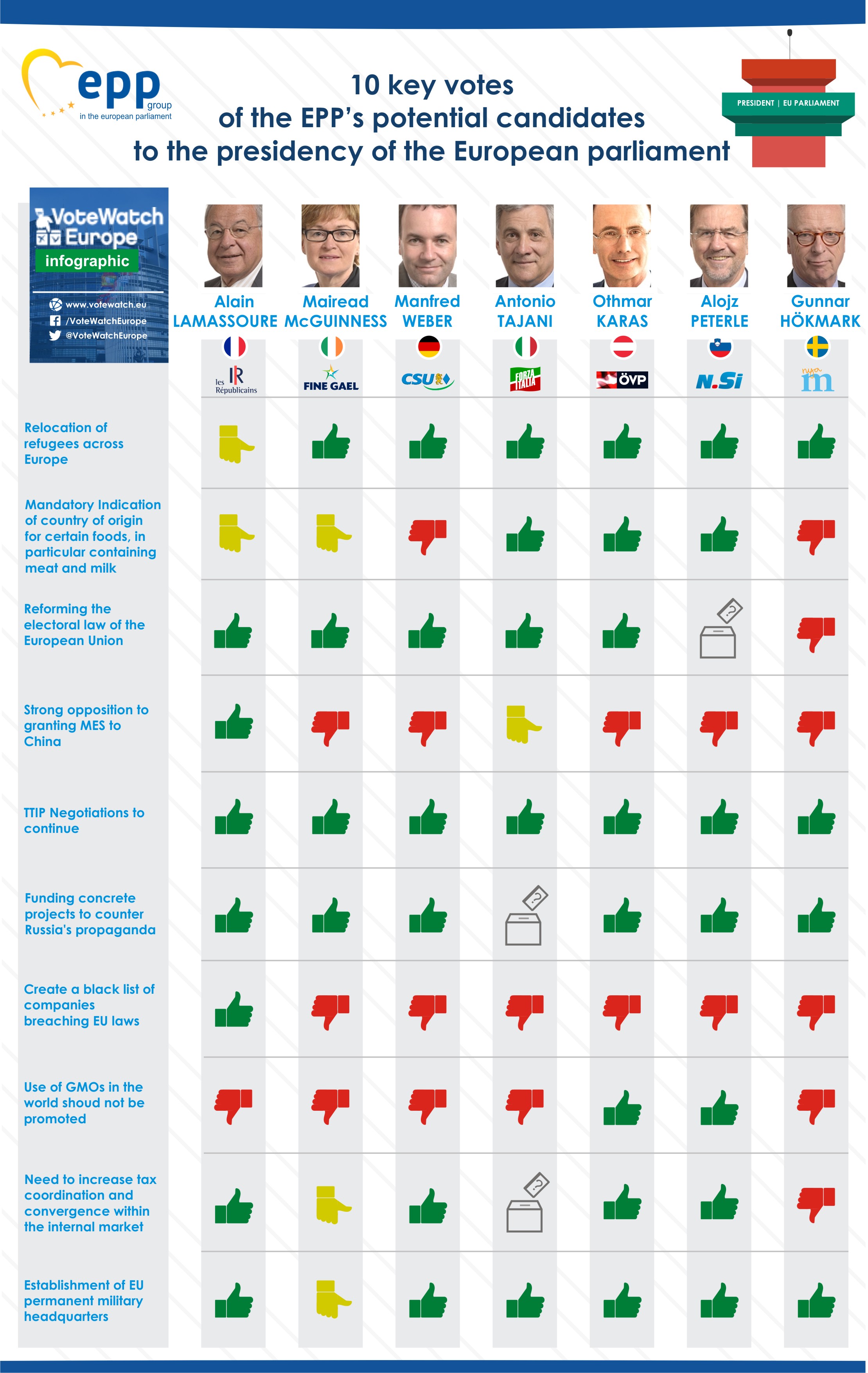 Still, this selection of votes does not tell us to what extent the views of these MEPs are in general shared by the majority within their political group. This is highly relevant, as the candidates who are usually seen as more “central” in terms of views among their colleagues are usually the ones nominated as candidates on behalf of that political faction. The table below shows to what extent the votes of the possible candidates match, on average, those of the  largest national delegations within the EPP.

Note: the differences in percentages are, in general, small, but these calculations are based on over 4.000 votes, hence their relevance is higher than it seems at first sight and, sometimes, the half-percent includes exactly those most sensitive issues. 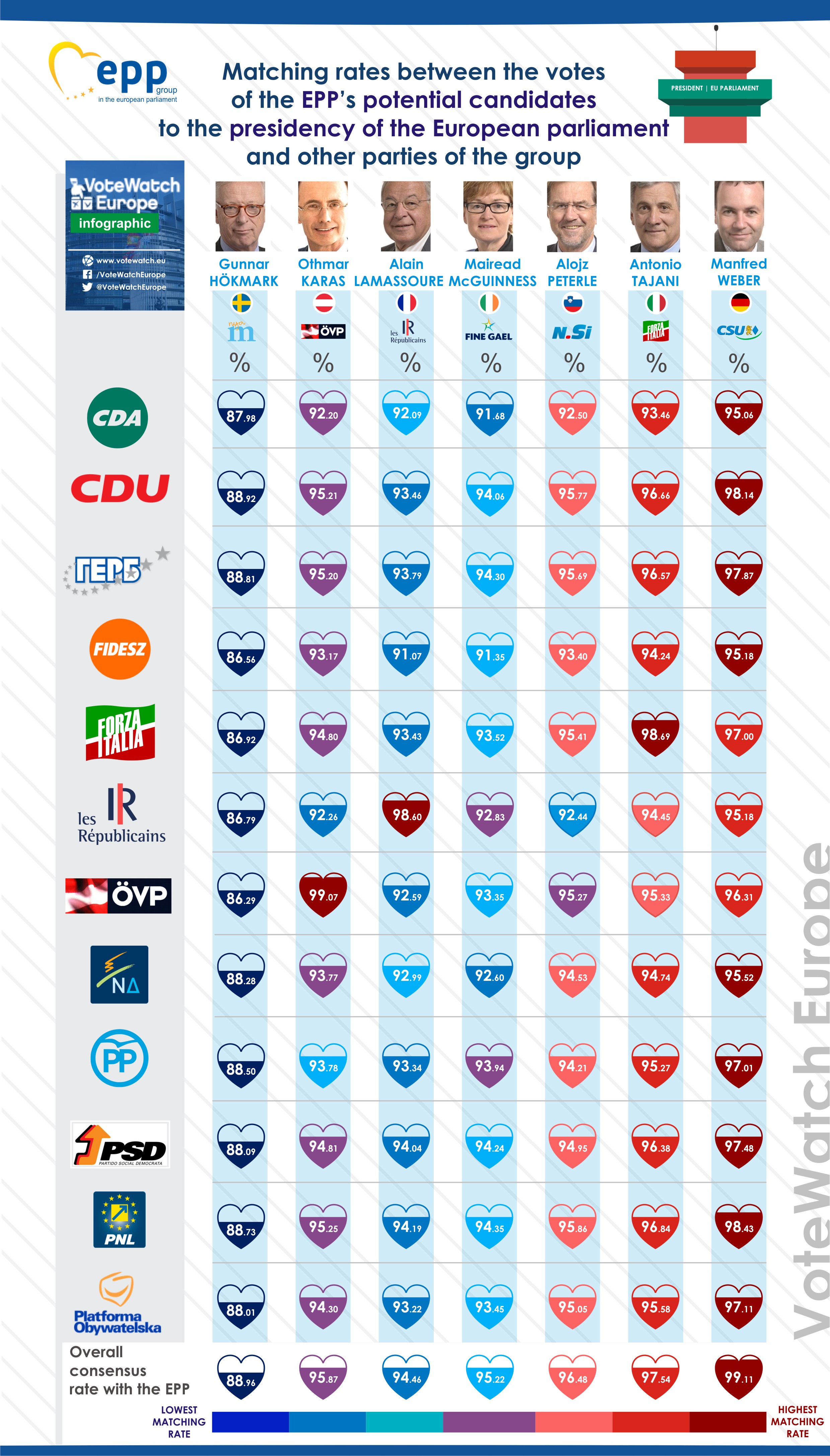 Interestingly, in most of the cases, Manfred Weber is the closest MEP to the positions of the largest party delegations within the EPP. He is followed by Antonio Tajani, whose positions are also very popular within the group. Instead, Gunnar Hökmark is more isolated within the EPP, as he votes differently from the rest of the group more frequently. The French Alain Lamassoure is also more often in the minority in the group, compared to the other candidates.

Which EPP candidates would be preferred by the other political groups?

All in all, Manfred Weber or Antonio Tajani would be the most likely to be elected as the EPP’s candidate, as their positions are closer to the ones of the majority of their group colleagues, ie. they more central within the EPP. However, since the EPP is far from commanding a majority on its own, the candidate of the EPP needs to win a substantial amount of votes from the members of the other political groups. Given that the members of the eurosceptic EFDD and ENF, as well as the far-left GUE-NGL, are unlikely to vote for a candidate coming from the EPP, the only potentially supportive MEPs have to be found within ALDE, S&D, the Greens and ECR groups.

The table below shows to what extent the views of the EPP potential candidates match those of the other political groups, in search of clues as of which candidates might be more appealing “externally”. 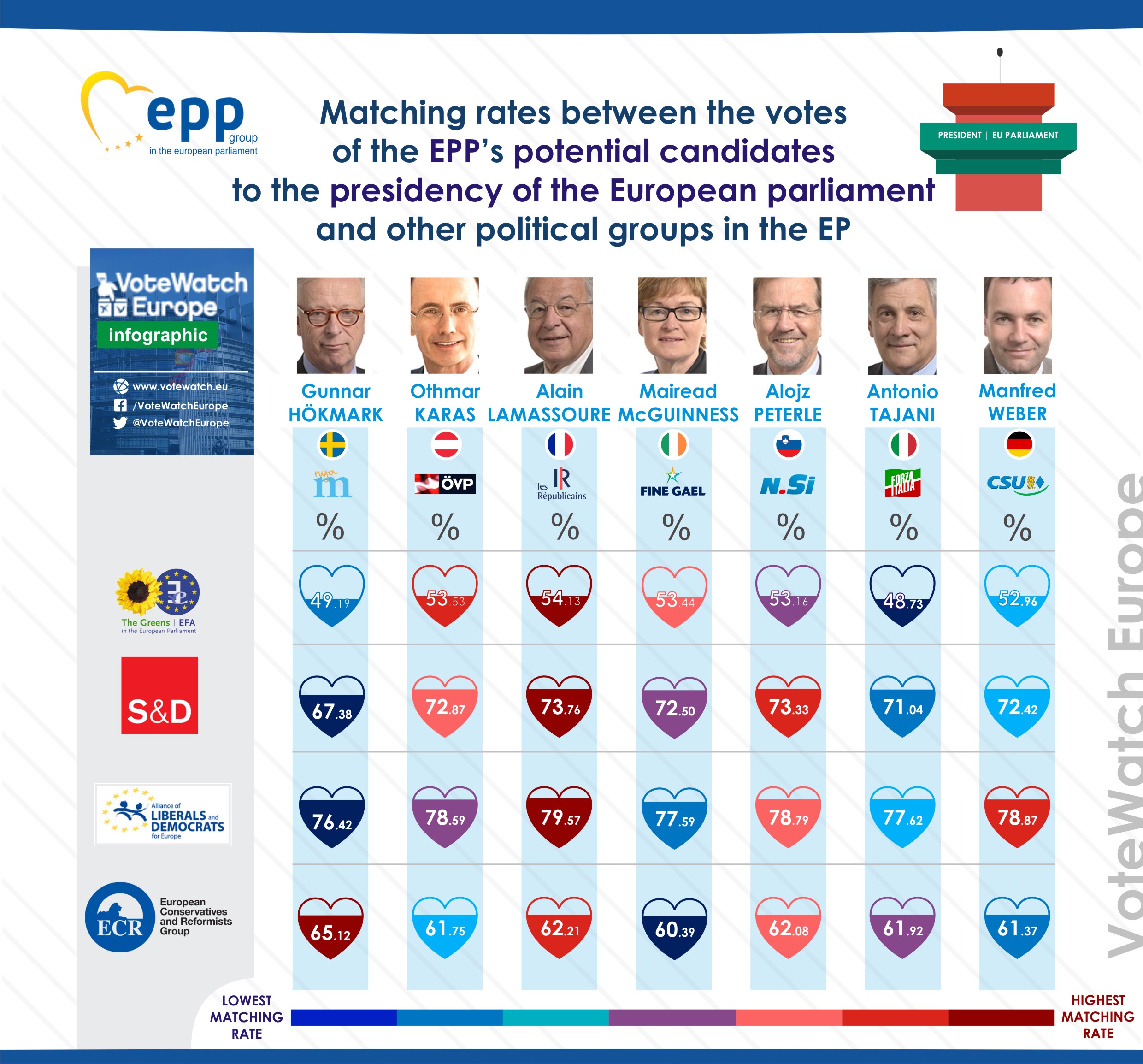 The race is still very open

This is not a new phenomenon in politics. In most of the primaries, also at the national level, the candidates who are more popular internally (inside the party) are also less likely to draw support from other factions and vice versa (whereas some other candidates are more towards the “center of the population of electors”). The final outcome will also depend on many other factors, for example the trade-offs made when assigning the other key positions within both the EP (notably vice-presidencies and committee’s chairmanships) and the other European institutions (notably the European Council). Therefore, nationality and other political considerations will also play a role in determining the winner of this race.

For more information and analysis contact us at [email protected]