Home Votewatch » Who is the favourite to become the next President of the European Parliament? 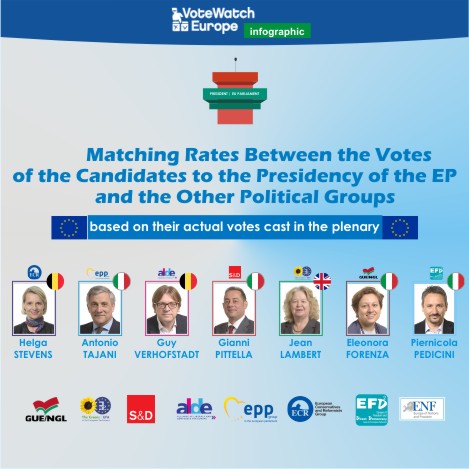 On Tuesday 13th, the EPP group elected its candidate for replacing Schulz at the helm of the European Parliament. A prominent member of Forza Italia, Antonio Tajani, received the mandate to run for the Presidency, after his candidature collected more votes than the other three contestants (Peterle, Lamassoure and McGuinness). On the 17th January, Tajani will have to face off the candidates presented by the other political groups. Quite interestingly, most the candidates presented so far are either Italian or Belgian: Gianni Pittella (S&D), Guy Verhofstadt (ALDE – likely candidate, not official), Helga Stevens (ECR), Eleonora Forenza (GUE-NGL) and Piernicola Pedicini (EFDD). The Greens/EFA’s candidate Jean Lambert is the only exception, as she is a British national.

Our previous analysis showed that, out of the four official candidates of the EPP, Tajani was the closest one to the average policy positions of the other members of their own political group (second only to Weber, but which decided not to run himself). As such, Tajani’s victory in the ‘primaries’ does not come as a surprise.

However, our research has also indicated that Tajani’s views are much more distant from the positions of the other political groups than those of Lamassoure, for example. This means Tajani will not find it easy to rally support from among the MEPs outside the EPP. 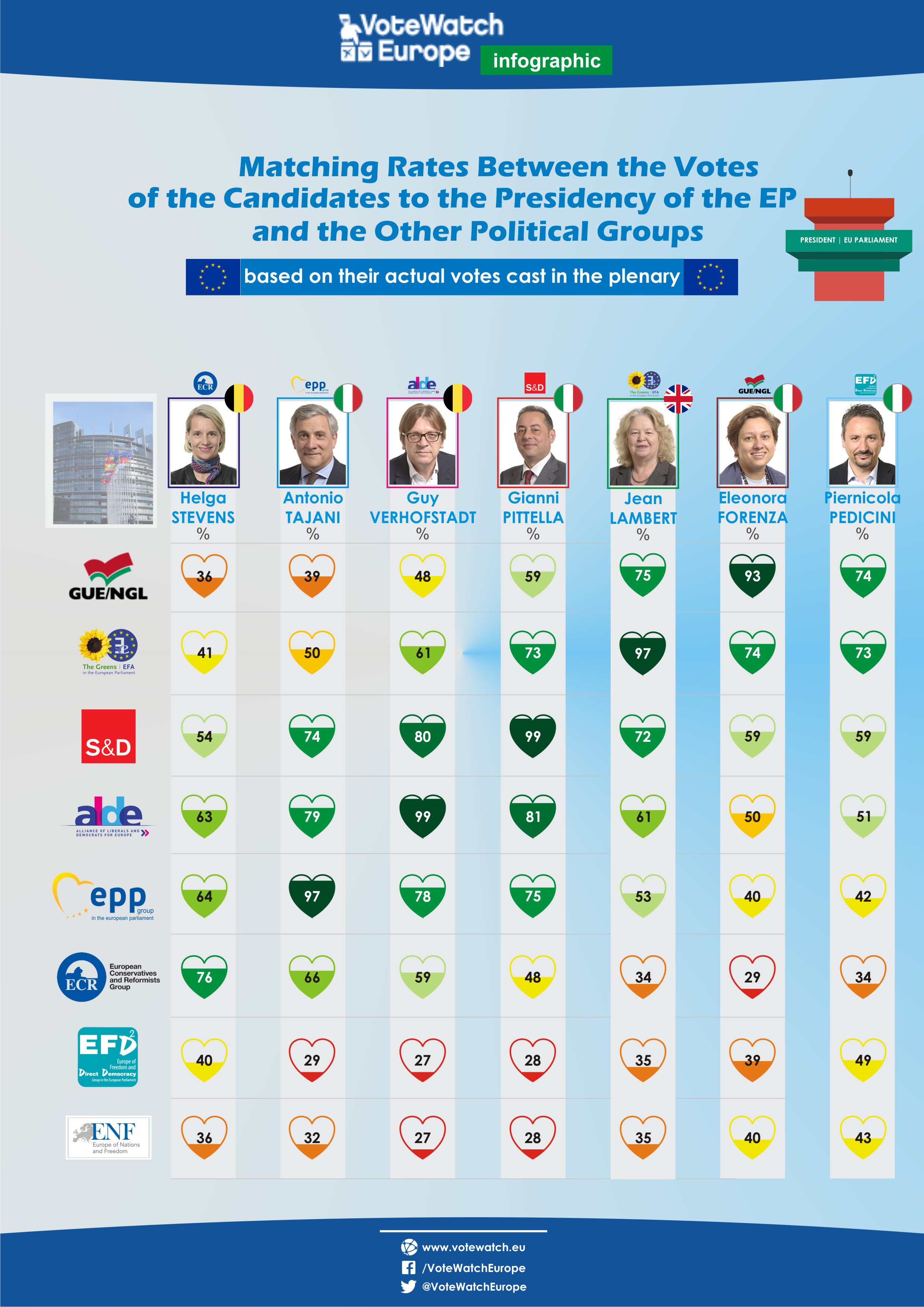 Our infographics, based on the comparative analysis of over 4.000  EP votes on actual policy positions, shows that Pittella and Tajani would enjoy considerable support inside their own groups. If the members of S&D and EPP stick to the official candidates, it will be easy for Pittella and Tajani to access the final run-off. On the other hand, if none of the other candidates will withdraw before the last round, it will be impossible for them to reach an absolute majority before the last round.

Additionally, our data shows that Pedicini, Forenza  and Lambert are appealing to the same type of MEPs, as their matching rates with the other groups are similar. This means that they are undermining each other with their candidature. However, even if there was a common candidate appealing to the far-left, Greens and the Italians in the EFDD, this contestant would still fall short of getting enough votes necessary to access the run-off, as long as centrist MEPs stick to their candidates.

On the other hand, a candidature of Verhofstadt would get much support from ALDE’s members. Unfortunately for him, Liberal MEPs are way too few to guarantee him an access to the run-off. Verhofstadt appeals to pro-European MEPs, but most of them sit in groups that already have their own candidates. His only chance would be to turn some of these MEPs, from S&D and EPP, away from the official candidates of their groups. As Pittella and Tajani are both Italian, the Belgian leader can hope to get votes from members of these political groups who, for some reasons, would prefer a “Nordic” President than a “Southern” one.

Finally, Stevens can count on the support of ECR, but her matching rates with the other groups are not high enough to guarantee her broader support. Some members of ENF or EFDD could perhaps back her, as she promises she would be a more inclusive President vis-à-vis the fringe groups, but this support would hardly be sufficient to get to the second round.

If every MEP votes according to the group line and the above-mentioned matching rates, Pittella and Tajani would face off in the second round. But, who would finally become the new President?

Our preliminary simulation indicates that Pittella has the upper hand in the run-off. If he gets the full backing of the Greens and GUE-NGL, this would outweigh the potential votes by ECR in favour of Tajani. In fact, ECR and EPP can count on 290 MEPs, whereas S&D, Greens/EFA and GUE-NGL can count together on 291 MEPs. In this case, the Liberals will be decisive. Our comparative analysis of voting behavior indicates that Pittella is more likely to get the Liberal votes than Tajani. However, two factors should also be considered:

-It is unclear at this point whether EFDD and ENF members will take part in the final vote. In fact, their positions are too distant from both leading candidates, hence these groups can hardly be interested in explicitly supporting a candidate from EPP or S&D. However, they could still decide to vote strategically, in exchange for for ‘a favour’. As it stands, S&D seems to be worried about a potential support for Tajani by ENF and they are asking Tajani to rule out any possible collaboration with the far-right group;

–Pittella needs a higher external support than Tajani. The EPP has more MEPs than S&D and this is the initial basis of support for the two candidates. Full support from the other political groups during the run-off should not be taken for granted and Pittella will have to convince the members of the other groups to vote for him.

Once again, MEPs will not vote only along group lines. For this reason, we are going to run a second, more in-depth simulation comparing the views of each individual MEP with those of the candidates, to identify who can are the most likely to be the swing voters.

For questions and suggestions, feel free to contact us at [email protected]

Background: how will the new President be elected?

The next President of the Parliament will be elected by secret ballot by his/her fellow colleagues in the Plenary. During the initial three rounds, the candidate will need to get an absolute majority of votes in order to be elected (50%+1 of all MEPs). This means that at least 376 MEPs will have to vote for a certain Member in order to end the procedure before the fourth ballot. Otherwise, the two candidates who received more votes in the third round will face off in a fourth round, in which the candidate getting more votes will become the next President. In case of a tie, the older member will prevail.

This means that there are two potential scenarios:

– The winner will be decided before the vote, grand-coalition’s style: As the election of the President of the European Parliament is intertwined with the elections of other key offices within both the Council and the Parliament, it is still possible for the two large groups in the EP to find an agreement beforehand on the future President of the EP. In this case, one of the candidates from the big groups would withdraw and the preselected contestant will be elected during the first few ballots. However, the leader of S&D, Gianni Pittella, already stated several times that the grand coalition is dead and there is no way it can come back. On the other hand, the leader of the EPP group, Manfred Weber, adopted a more conciliatory stance and he is trying to preserve the current alliance between S&D and EPP.

– The winner will be decided at the last round (considering the high number of candidates): This means that the main candidates will try to get as many votes as possible during the process. This will also empower the smaller groups, as their positioning will determine the final outcome of the election. The big question is: which candidates have a better chance to get a majority of votes? Many factors can explain MEPs’ behavior. For sure, one of the most important aspect is related to whether MEPs share common views with a certain candidate. For this reason, we calculated the matching rates between the votes of candidates and the ones of the other political groups. On the basis of this data, it is possible to draw a rough forecast on how the political groups could behave in the plenary. We simulated which candidate would win if two conditions are met: the MEPs from a certain group will vote in the same way and they will vote according to the shared views with the candidates. Obviously, these conditions are not completely realistic and we will run a more refined simulation (taking into account the positions of the individuals) later in January.

Annex: Who are the candidates?

Tajani previously served as a Commissioner for Transports and Industry & Entrepreneurship (2008-2014).  Acting as one of the 14 Vice-Presidents of the EP, Tajani has been dealing with the Conciliations, the implementation of Article 17.

Before joining the EP, he was an editor of the daily newspaper “Il Giornale”, Italian air force officer and the spokesperson of Berlusconi’s party, Forza Italia.

Gianni Pittella is a member of the Democratic Party, which is the Italian party with most members in the EP. Previously a private doctor, Pittella has firstly been elected in 1999, and his level of influence had grown since then. First, he was head of the Italian delegation in the group and First Vice-Chairman within the S&D group in the previous terms. Pittella is currently the chair of S&D group in the European Parliament.

Born deaf, Stevens, who was elected as Member of the European Parliament for its 8th term, has been focusing on issues related to disabled people. Previous member of the Flemish parliament and of the Belgian Senate (2003-2010), Helga Stevens is now part of the New Flemish Alliance party and Vice-chair of the European Conservatives and Reformists group.

Before joining the EP in 2009, Guy Verhofstadt was the Prime Minister of Belgium for almost ten years (from 1999 to 2008). When he was appointed as PM of Belgium, he had already been the chair of his political party for several years. His long experience as the leader of a political party might explain why he has been leading the Liberal group in the European Parliament since the moment he joined the institution.

Eleonora Forenza is the “political alternative” chosen by the political group GUE/NGL to run for the European Parliament presidency. Forenza is an Italian activist and the spokesperson for culture and communications in the Communist Refoundation Party. In the EP, Forenza is the Vice-Chair of the delegation to Chile.

Pedicini, member of the 5 Star Movement, is the Vice-Chair of the European Parliament delegation to the African Caribbean Pacific and he is very active on food safety within the ENVI committee (e.g. indication of country of origin for certain foods; glyphosate, trans fats etc). Having studied medicine, Pedicine had a career as physician, researcher and head of several health units in Naples.

Lambert is an experienced member of the EP, as she has been serving in the institution since 1999. Her main areas of interest are: rights of refugees, social inclusion and fight against poverty. The MEP from London is also active on EU relations with Southern Asian countries and she chaired the dedicated EP delegation during the last term.