Home Votewatch » Who are the winners and losers of the European Parliament’s reshuffle?

The mid-term reshuffle of the key positions in the European Parliament was more than just switching individual MEPs from one position to another: it also resulted in significant gains and losses of influence among some national delegations.

The reshuffle entailed the elections of the new members of the EP bureau, the chairs and vice-chairs of the committees and the political coordinators of the groups (in each of the parliamentary committees).

This report provides a full mapping of the outcome of EP mid-term reshuffle and measures the influence gained and lost by the political players in the EP.

Notably, the trumpeted new agreement between ALDE and the EPP, leading to the election of Antonio Tajani as the new President of the European Parliament, did not lead to radical changes in the political distribution of key positions in the committee between the political families. In fact, apart from the election of Cecilia Wikstrom (ALDE) to the Presidency of the Conference of the Committee Chairs (replacing EPP’s member, Jerzy Buzek), all the other positions at the committee level were assigned to the same political groups that obtained these posts at the beginning of the term.

However, there have been substantial changes with regards to the nationalities of the MEPs holding these positions, ie. the moves strengthened some national party delegations vis-à-vis the others.

Methodological note: the scorecards in the infographics are based on a VoteWatch algorithm that has been developed with the help of more than 200 experts in EU affairs last year and that is used regularly for assessing influence dynamics in the EP.  We considered all the changes that took place at the leadership and coordination levels in both the political groups and the parliamentary bodies[1].

Overall, the Maltese MEPs (probably also helped by the coincidence of the reshuffle with the Maltese Presidency) gained the most in relative terms. Lithuanians, Czechs, Swedish and Italians come next. At the other end, the Croatians were the biggest losers, followed by the Finns, Slovenians and Estonians. From among the big countries, both the UK and Germany ended up on the losers’ side, albeit for different reasons: while the Germans lost the EP President, the British EU Parliamentarians are starting to feel the consequences of the Brexit process. However, the losses incurred by the British MEPs have been moderated and much smaller than some had expected, while the Germans, despite their loss, remain the strongest influencers in the European Parliament. A look inside each of the political groups helps us understand better internal dynamics.

Italians get their way in the EPP. Merkel’s CDU also increases its influence

In the EPP, the most prominent case is Forza Italia, which, despite being almost considered as a pariah party during Berlusconi’s years, has now made a strong come back, placing its Antonio Tajani at the helm of the legislative assembly. Additionally, another member of the party, Stefano Maullu was elected as vice-chair of Culture and Education Committee.

Berlusconi’s party comes out stronger from this reshuffle, although at home Forza Italia faces a difficult choice: whether to form a coalition with the nationalist and eurosceptic Northern League and Brothers of Italy, or stick with the centrist parties. The election of Tajani strengthens the centrist wing of the party, as Tajani is not a great friend of the leader of the Northern League, Matteo Salvini, who recently called him “Merkel’s servant” because of his closeness to the German CDU.

Proportionally, also the Maltese delegation in the EPP can be happy, as Roberta Metsola was elected political coordinator of the EPP in the Committee on Civil Liberties, Justice and Home Affairs (LIBE). This position is particularly important as this committee will deal with the reform of the Dublin system and all the other files concerning the refugee crisis. As Malta has been strongly hit by the refugee crisis, Maltese MEPs are at among the chief advocates  for the establishment of a mechanism to redistribute refugees across the continent.

Losses of influence in the EPP are more equally distributed across a few national delegations. Most notably, Manfred Weber’s own party, the Bavarian Christian Social Union, lost the above-mentioned post of EPP coordinator in the LIBE commitee. It is worth reminding that the CSU politicians are strong opponents to Merkel’s pro-immigration policy, hence this change can be linked to internal German politics.

Also, losses were incurred by the small Italian party New Centre-Right, Renzi’s ally in Rome, which previously held the Chairmanship of Environment (ENVI) Committee through Giovanni la Via.

Notably, Donald Tusk’s Civic Platform has also been negatively impacted, losing the Presidency of the Conference of Committee Chairs and some minor positions. This latter development can partly also be attributed to the significant weakening of the Civic Platform at home, in Poland, and raises the suspense about the faith of Tusk’s bid to remain President of the European Council. 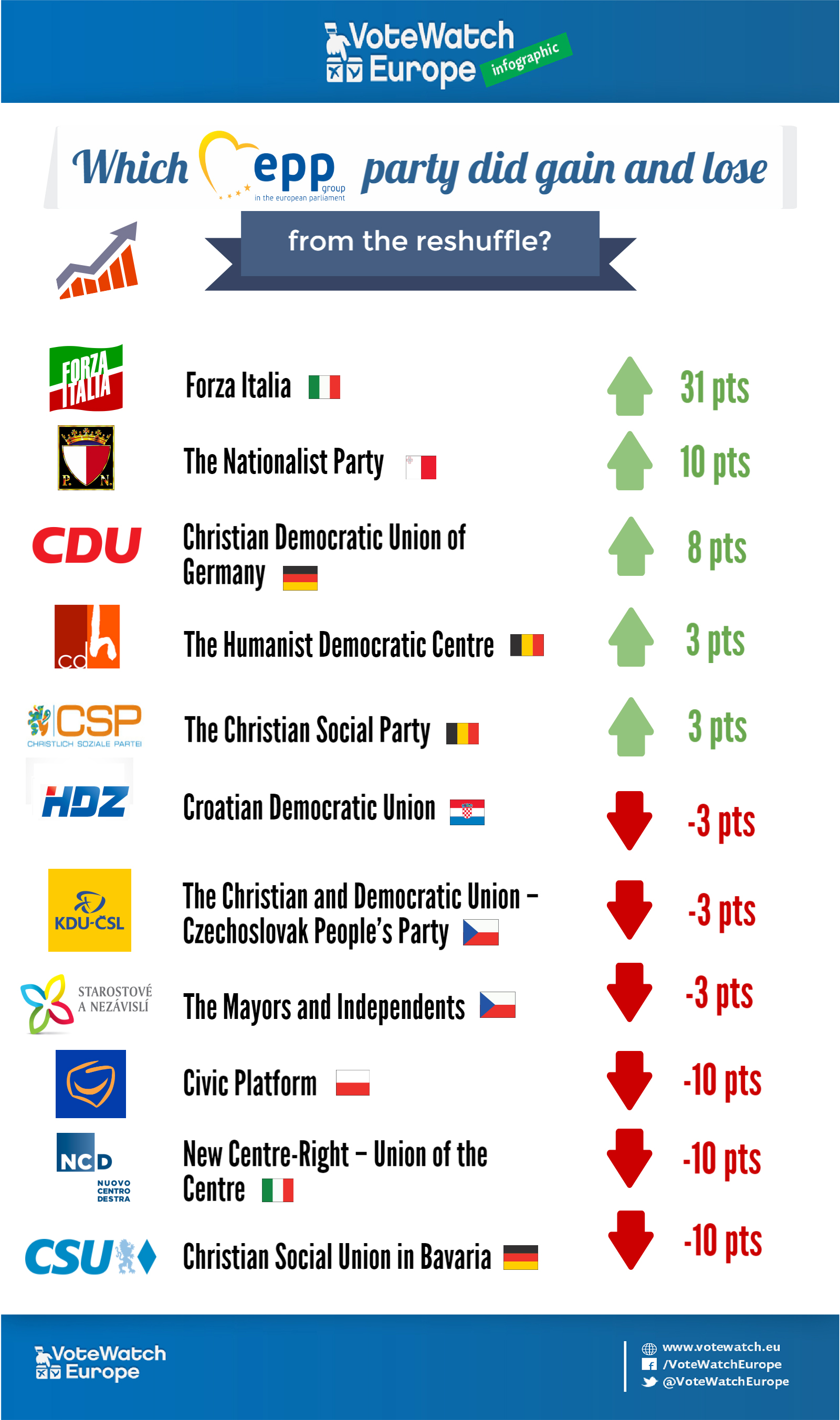 Despite the fact that the leader of S&D group, Gianni Pittella, was ultimately defeated by Tajani in the bid to for the top EP post, Pittella’s delegation of the Democratic Party (currently governing in Rome) still managed to benefit from the reshuffle. In fact, the party gained two important coordinating positions in the trade committee (Alessia Maria Mosca) and industry and energy committee (Nicola Danti). The election of Mosca as the coordinator of S&D in in the trade committee is particularly important, as her group is often split on international trade. Most of the Italian centre-left MEPs are more supportive of international trade than the average of their group and they already voted in favour of CETA during the vote in the committee.

One of the members of the small Polish delegation in S&D, Bogusław Liberadzki, was elected Vice-President of the European Parliament, therefore boosting the visibility of his party, the Democratic Left Alliance, which is currently struggling to improve its electoral performance at the national level.

Among the winners of the reshuffle, we also found the party in the government currently holding the Presidency of the Council of the European Union, the Maltese Labour Party. In fact, Miriam Dalli was elected as the new S&D coordinator in ENVI, one of the most powerful committees of the Parliament. She replaces a German MEP, Matthias Groote, who just recently left the European Parliament. Dalli will have the hard task of defining the position of her group in the committee where EPP and S&D clash the most.

On the other hand, Corbyn’s Labour Party lost two important coordinator positions recently in the foreign affairs and trade committees. This can be seen as a first impact of the Brexit process, as the imminent farewell of British MEPs to Brussels weakens their negotiating positions within their pan-European groups. Another factor to consider is the effect of Corbyn’s take-over of the party since the last political elections in 2015. Since then, Labour MEPs considerably radicalized their positions on certain issues, such as trade, therefore changing the political equilibrium within the group.

Not surprisingly, German SPD lost the most during the reshuffle, as its prominent member Martin Schulz left the European Parliament in order to challenge Angela Merkel at the next German legislative elections. Another important member of SPD, Matthias Groote, recently left the European Parliament to run for a local election in Germany, losing the coordinating position in ENVI for the SPD in the process. 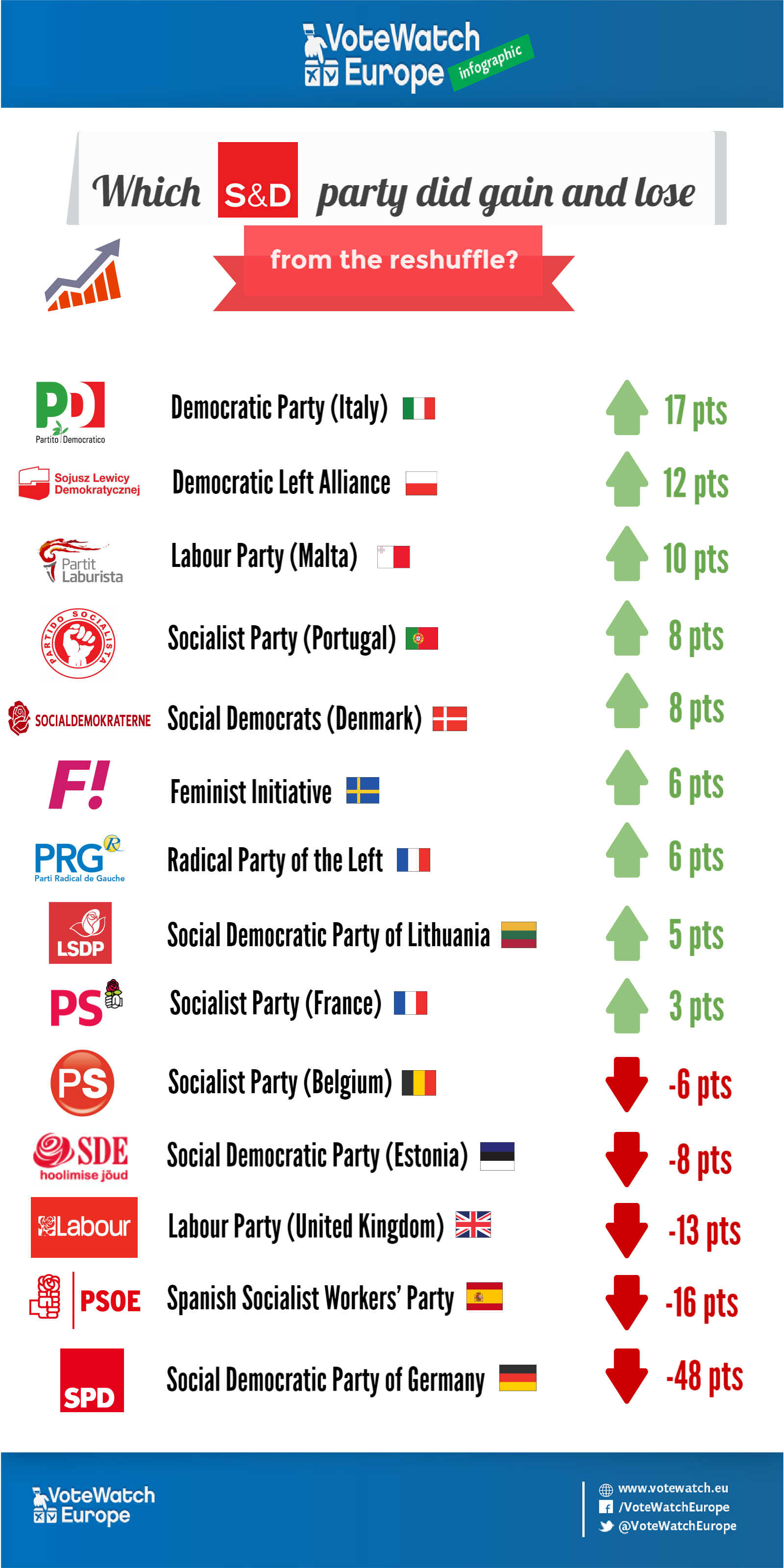 ALDE: Czech ANO 2011  shines, while the Finns lost the most

When observing how the reshuffle played out in the ALDE group, it is difficult not to notice the significant gains made by one of the largest Czech parties, ANO 2011. This centrist party founded by the entrepreneur Andrej Babiš is currently leading the polls in Czech Republic and set to win the upcoming Czech legislative elections in October 2017. Such a performance will further strengthen its clout at the European level, but also in the Central and Eastern Europe region, where Euroscepticism is on the rise. During the reshuffle, ANO 2011’s member Pavel Telicka was elected Vice-President of the European Parliament and coordinator of transport and tourism committee. Additionally, his party colleague, Dita Charanzová, was elected as vice-chair in the internal market Committee.

Other minor changes have been recorded in the remaining EP groups.

VoteWatch Europe is currently conducting studies that measure the level of influence and actual views of individual MEPs on specific sectors, such as the digital policy, energy policy, environment, economic policy and EU’s constitutional system.

For any inquiries feel free to contact us at [email protected].

[1] At the time of the publishing of this report (7 Feb 2017) the vice-chairs of ECON and BUDG Committees are not yet known, due to delays triggered by the lack of female candidates (EP rules of procedure require that there should be at least one female among the committee’s VCs). Consequently, potential changes among these positions have not been factored in yet.