Home Votewatch » What takeaways from the latest Italian political earthquake? 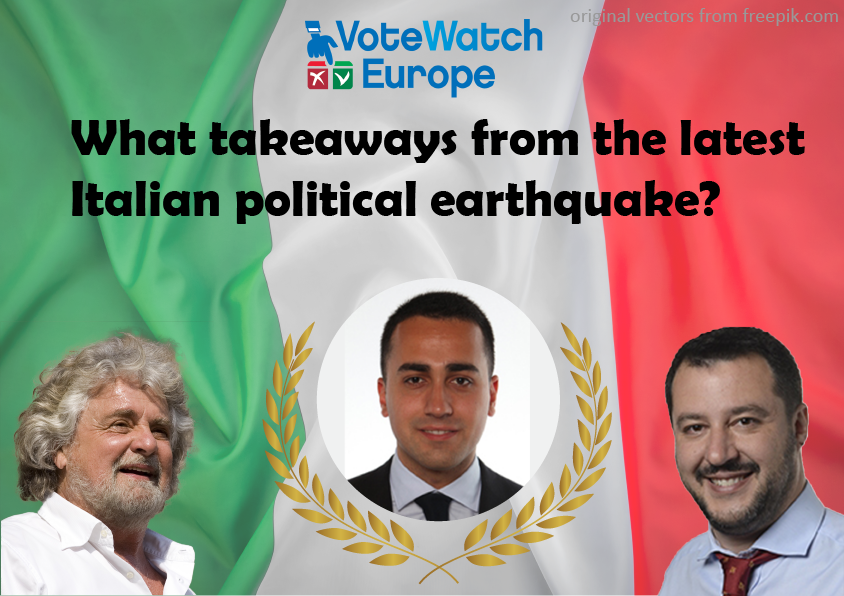 Another major European election, another big earthquake for the (traditional) political establishment. In a historical Italian election, the mainstream parties that have dominated the Italian political life over the last 20 years (i.e. Renzi’s Democratic Party and Berlusconi’s Forza Italia) have been crushed by the 5 Star Movement (an internet-based party founded by a comedian), and the far-right League, whose campaign took inspiration from Donald Trump’s style. This is a major turning point for the fourth largest EU country by population, and the impact of these elections is likely to ripple across the European Union. This outcome mirrors the developments at the latest French and Austrian Presidential elections where mainstream parties were knocked out at the first stage, while similar shake-ups have made it historically difficult to form governments in Germany and Spain.

What are the main takeaways for Europe of this unprecedented political shock? VoteWatch took a bird-eye look at the Italian elections, this is what we saw:

The European political center keeps shrinking, as electors are unafraid of embracing change

These elections are yet another confirmation of the major trends unfolding throughout the continent. The political center keeps shrinking across the European Union, with the Italian parties belonging to the largest European political families, namely the Democratic Party (S&D) and Forza Italia (EPP), falling dramatically below 20% of support. On the other hand, the far-right political family (ENF) has improved dramatically its standing in the Italian peninsula, with Salvini’s League gaining 10% more votes from the previous elections. Backlash against migration is particularly strong in Italy, although the League also based its electoral campaign on other issues connected to globalization, such as the loss of cultural identity, industrial relocations and skepticism towards the European Union.

The biggest winner is the 5 Star Movement, which is currently in the same European Parliamentary group as Farage’s UKIP (EFDD). 5 Star performed strongly in the South (almost 50% of votes in Sicily), thanks to its strong message against widespread corruption, the inefficiencies of the Italian political and bureaucratic system, as well as its criticism of the mainstream economic policies which are considered to be responsible for the high level of unemployment and one of the slowest economic growth in the European Union.

While the traditional parties tried to fight back by warning against the downside of what they called populist temptations, Italians showed that they are willing to support more radical views in order to trigger a much-desired change. The governing EU forces need to take note if they want to gain a majority after the 2019 EU elections: simply labeling their opponents as populists is not enough to deter the citizens from voting for them.

The outcome of the Italian elections is yet another demonstration of the current trend of increasing political volatility across the Western world. As pointed out in our previous report on the matter, new communication technologies are facilitating the access of new political movements into electoral market, meaning that media-savvy newcomers can now easily compete with the traditional political parties (in the same way as the rising financial technologies are now threatening the traditional financial organizations).

Just as Berlusconi exploited the rising influence of private TV networks to disrupt the Italian political scene in the 1990s, the 5 Star Movement capitalized the most on the opportunities offered by the internet. The movement started as a grass-root initiative led by a popular comedian and blogger, Beppe Grillo, and ultimately managed to become one of the most successful Italian parties ever. The founders of the movement go as far as forecasting that, in the future, Internet will pave the way to replace the current representative democracies with internet-based direct democracies. This rhetoric might sound too far-fetched, but when 10 years ago some visionaries were forecasting that internet will become the main scene for the political debate, their views were also seen as exaggerations.

The recent success of the League can also be linked to the role of the social media. The leader of the Northern League, Matteo Salvini, took over a party with deep financial issues and falling popular support after a series of scandals (the party got only 4% of votes in 2013), and led it to its best performance ever (17%) thanks to an aggressive social media strategy (similar to the one deployed by Trump, whose success inspired Salvini’s own political campaign).

Mostly because of its highly unstable political environment, Italy is leading the way in showing how political newcomers can effectively defeat more resourceful opponents by making the most out of the opportunities offered by new communication channels.

The outcome of the elections could not be farther away from what the European Commission, as well as most other EU governments, were hoping for. The European establishment was betting on a grand coalition between the Democratic Party and Forza Italia, while hoping for a weaker performance of the 5 Star Movement and the Northern League. The 5 Star Movement is now likely to head the next Italian government, although coalition building will be tricky.

The two main options on the table at the moment are either a coalition between the 5 Star Movement and the centre-left or an anti-establishment alliance with the Northern League (for more details on their potential impact on EU affairs check our previous in-depth report on the Italian elections). According to voting data in the European Parliament, the policy views of the 5 Star Movement are more compatible with the far-left (and to a minor extent the centre-left) rather than the far-right League. In both cases, the future Italian government is likely to adopt a much more challenging stance on the Eurozone governance, as the 5 Star Movement has been a long-time critic of budgetary discipline, as well as the euro currency itself. Still, Brussels would find it easier to deal with a coalition between the 5 Star Movement and the centre-left than the other radical option, as Salvini’s League has grown extremely nationalist and Eurosceptic.

This choice will also impact on the role of the 5 Star Movement in the next European Parliament. As with Macron’s movement, the Italian party is likely to disrupt the current political cleavages at the European level.  While 5 Star is for now in the Eurosceptic EFDD group, it has previously negotiated with the Greens/EFA and ALDE groups. In both cases, the 5 Star Movement has been rejected by these political groups, as these small political groups were afraid of being dominated by the relatively big Italian 5 Star delegation.

The political affiliation of the 5 Star Movement will also determine whether Italian policymakers will manage to maintain their (relatively) high level of influence in the European institutions in the future as well. In fact, the Eurosceptic political groups EFDD and ENF are often sidelined at the European level, giving little opportunities to their members to exert a high level of influence on EU policies.

In recent years, Italian politicians have been punching way above their weight when it comes to leadership positions at the EU level, having secured key positions such as those of Mario Draghi (President ECB), Antonio Tajani (President of the EP), Federica Mogherini (High Representative), but also Gianni Pittella (leader of S&D, second largest group in the EP). According to our latest influence assessment, Italian MEPs are among the most influential in the European Parliament and our previous report on the voting in the European Council shows that the Democratic Party-led Italian governments have been rarely outvoted in the key EU institution. However, this may change in 2019.

Ultimately, whether Italians will manage to remain influential in Brussels will mostly depend on the next moves of Beppe Grillo’s movement.

VoteWatch Europe shows the positions of the 751 Members of the European Parliament and of the 28 Governments in all decisions that are made at European level on behalf of over half a billion citizens. VoteWatch is also the platform most followed by the MEPs.