Home Votewatch » What is there in your dish? Regulation of nutrition choice divides EU policymakers 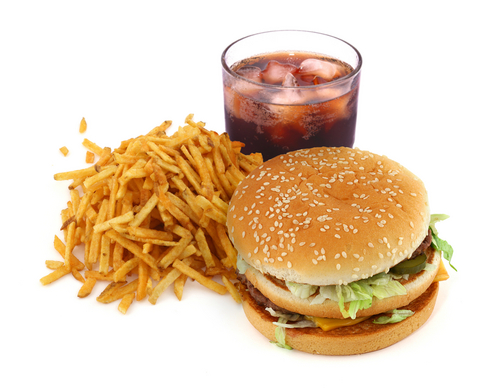 Alongside the more salient issues often mentioned by the media, such as trade, migration and economic policy, there are also other ways through which policy makers influence our quality of life. In this report, we tracked the positions of EU’s political forces on whether EU institutions should do more to regulate nutrition and food choice.

Additional labelling, limitations applied to certain products, as well as aid schemes for the supply of healthy food are different means of regulating the nutritional choices of consumers, with the purpose of helping them in prioritising healthier products over junk food. On the other hand, libertarians would like to limit the intervention of the public institutions on these matters, arguing that the freedom of choice should not be restricted and that excessive regulations harm businesses, which leads to job losses.

We have looked at 5 key decisions made in the European Parliament in recent times and which concern regulation of trans-fats, food additives, level of sugar and an aid scheme to supply fruit, vegetables and milk in educational establishments.

The analysis  of the voting behavior of European decision-makers shows that there are clear divisions among political families, as well as national delegations when it comes to establishing the degree of EU’s intervention on nutrition and food choice.

Czech and Dutch are the most libertarian policymakers 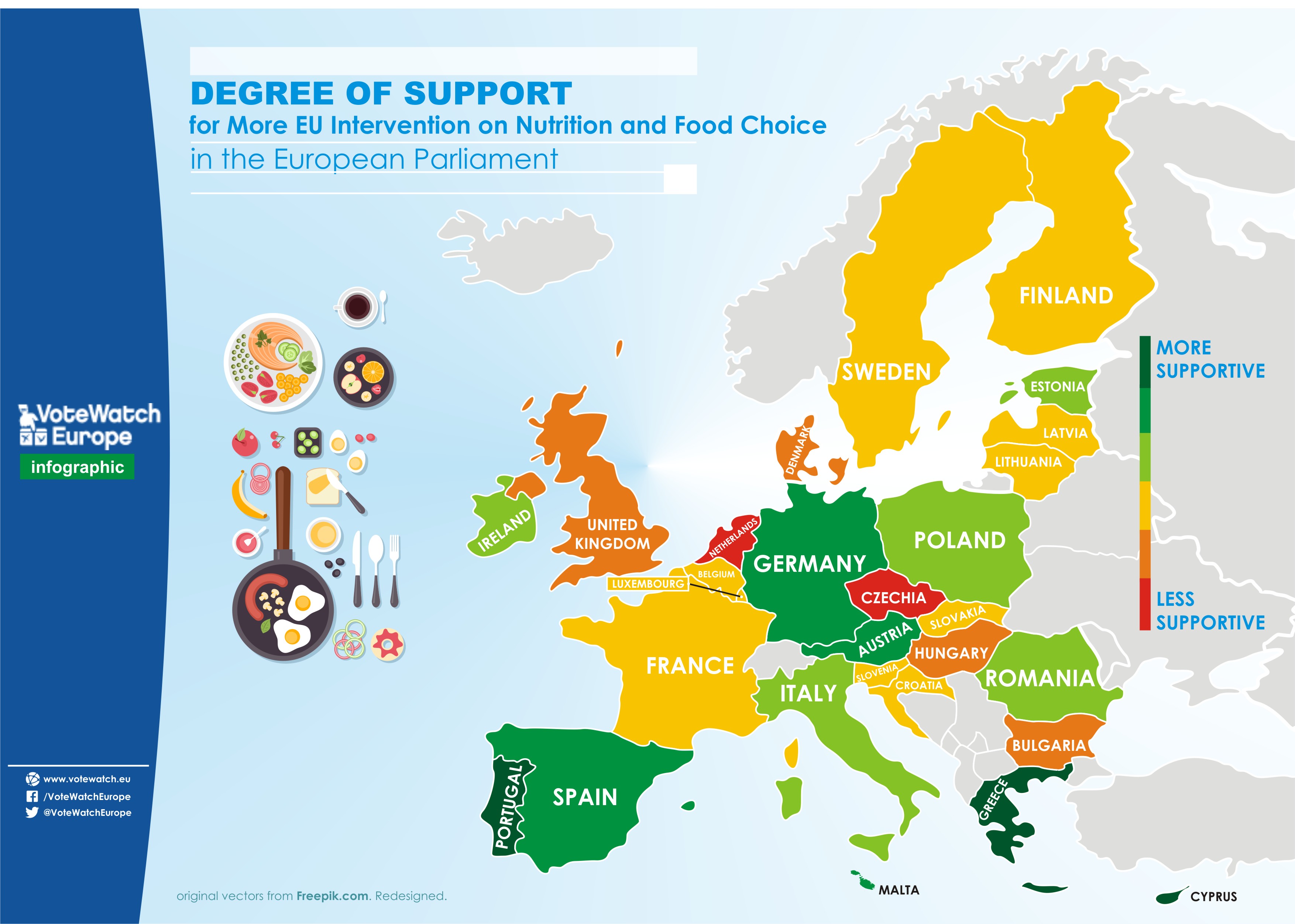 Analysis of actual votes of individual Members of the European Parliament reveals that the strongest opponents to a high degree of EU intervention are Dutch and Czech policymakers. The Netherlands and Czechia are also among the most libertarian countries in the EU according to some indexes (such as the “Nanny State Index” which was developed by liberal think tanks). On the other hand, MEPs from southern states such as Greece, Cyprus and Portugal are largely supportive of strong measures to promote a healthier food consumption.

However, beyond the national nuances, voting behavior on key decisions suggests that the views of the policy-makers variate strongly across the European political families. Perhaps not surprisingly, left and centre-left groups within the European Parliament have tended to vote in favour of more regulation of food and nutrition choice, while far-right, conservatives and liberal groups are more opposed to it. 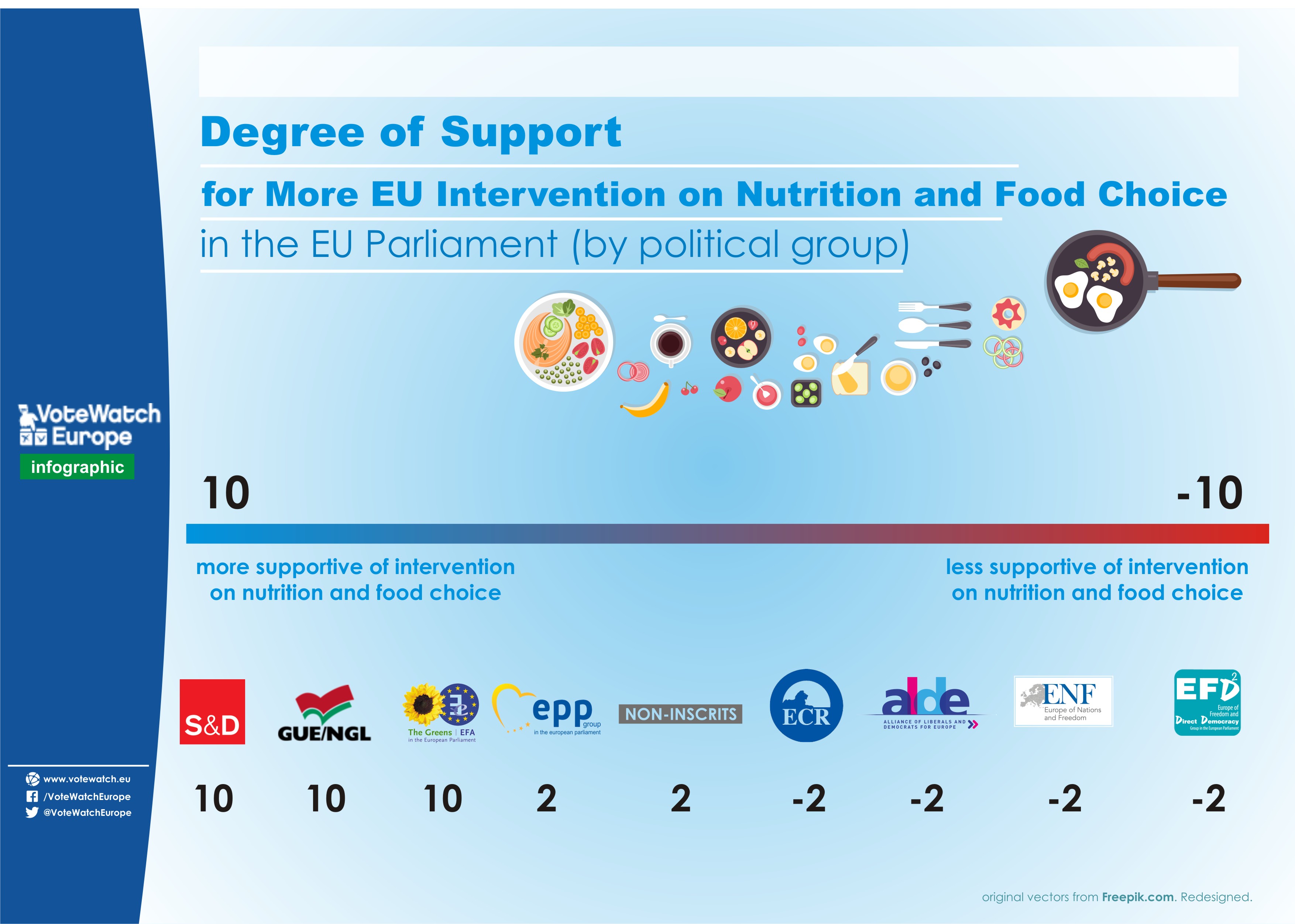 However, there are strong differences within certain political groups. For instance, in the liberal ALDE group, there are some differences between the traditional liberal parties and the (more recently established) progressive liberal parties. On the one hand, the German Free Democratic Party (FDP) and Mark Rutte’s party People’s Party for Freedom and Democracy (VVD), which won the recent Dutch general elections, are among the strongest opponents to public intervention on food and nutrition choices. On the other hand, the Spanish party Citizens (C’s) embraces measures to promote healthier diets. 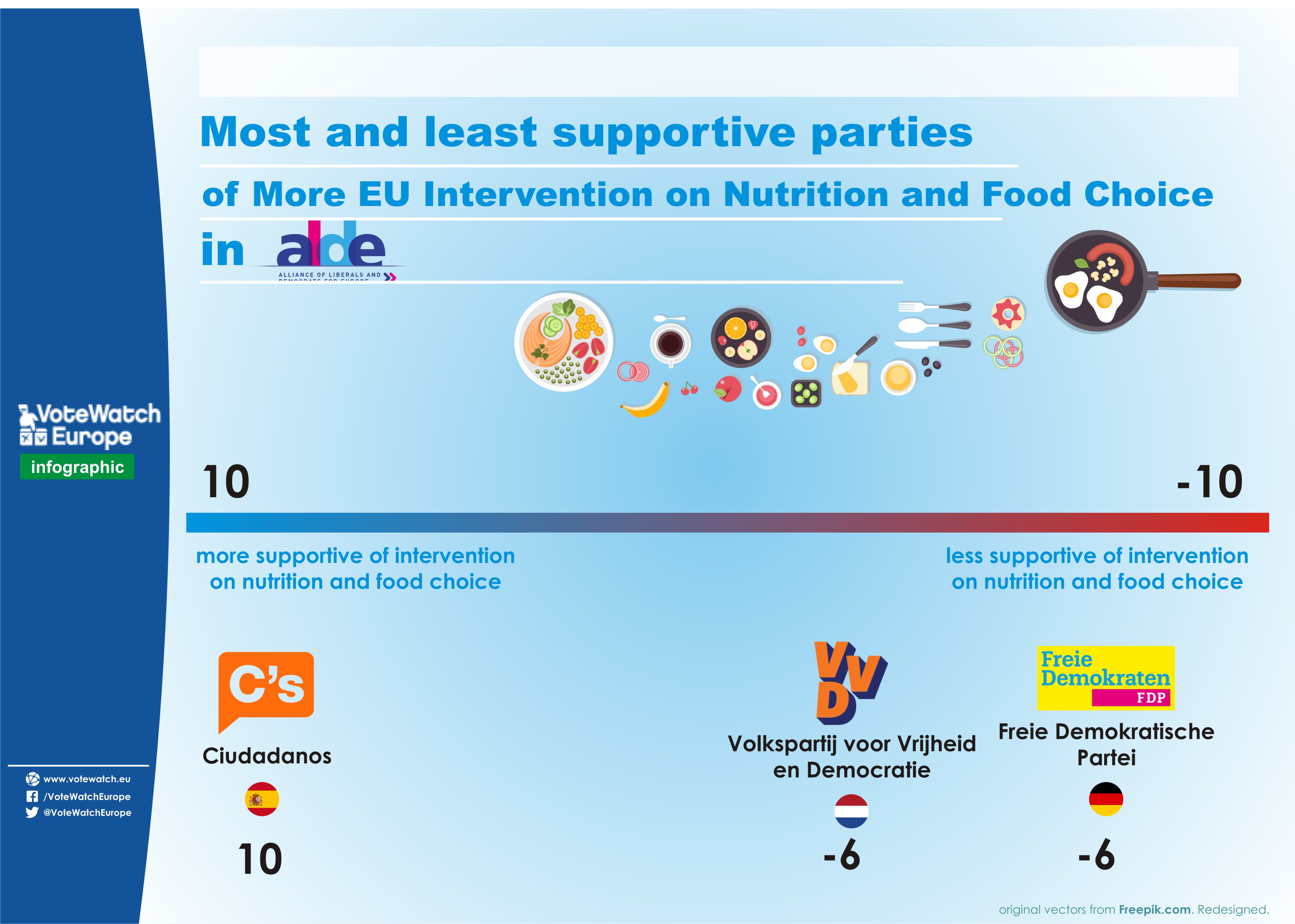 EPP group is the kingmaker on the regulation of food  choice

The far-left group GUE-NGL and the centre-left S&D group have supported food regulation in every vote we have analysed, from the promotion of healthier ingredients in educational establishments to the importance of additional measures for limiting trans-fats in food. Even with the support of the Green political group, this alliance would need to get the support of other MEPs, since the three groups do not have a majority within the Parliament.

The centre-right EPP group has a more moderate position and thus has not supported all the initiatives under examination. Ultimately, our data shows that there is not a clear majority for either a regulated approach or a libertarian approach. Moreover, both the pro-regulation and the more liberal factions are in power in around 35% of EU member states. The role of countries governed by a Christian-Democratic party (EPP) are decisive on these issues, as long as they can support either of the two sides.

For more detailed analysis contact us at [email protected]