Home Votewatch » What future for the Netherlands: do Dutch brace for more political instability? 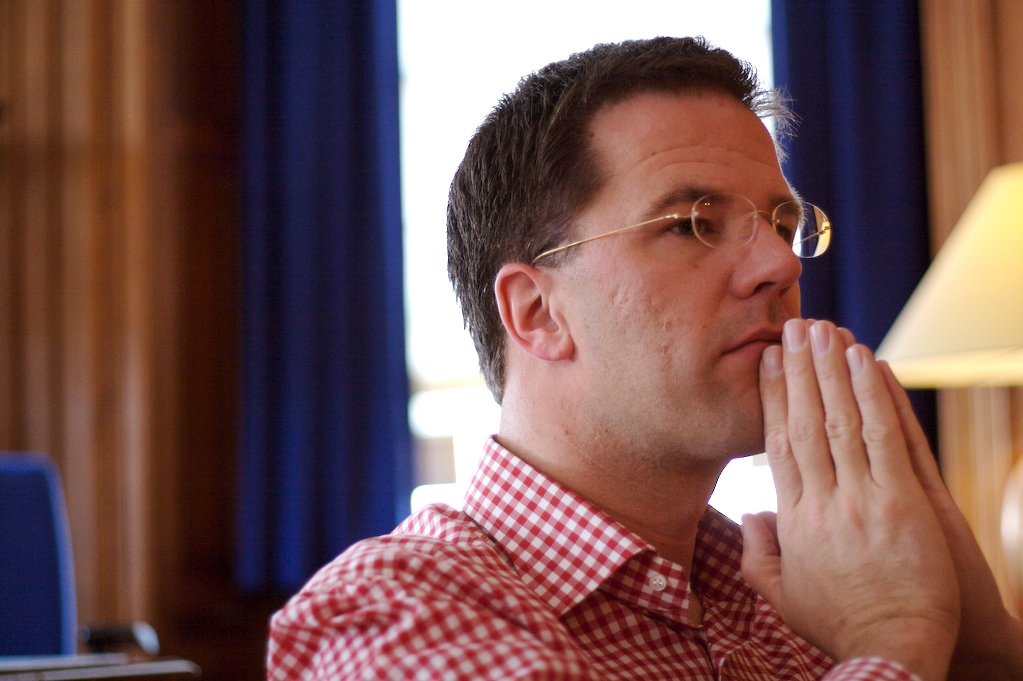 What can the EU expect from the next Dutch government? We outline the likeliest scenarios after the elections on the basis of the latest opinion polls combined with our political data. We are looking at the actual positions (not mere statements) that each Dutch party has taken through its own representatives when participating in making decisions at the EU level over the past 2 years.

Overall, the increase in fragmentation of the Dutch political landscape will make the government more unstable and deal-making more challenging. This will also affect the Eurozone and the EU as a whole, as some of the parties in government will hold reservations with regard to further EU integration, which is likely to lead to a stiffening of the Dutch position in the Council of the European Union. More specifically, a weak government might be more tempted to deploying Brussels-bashing strategies to boost its domestic support. 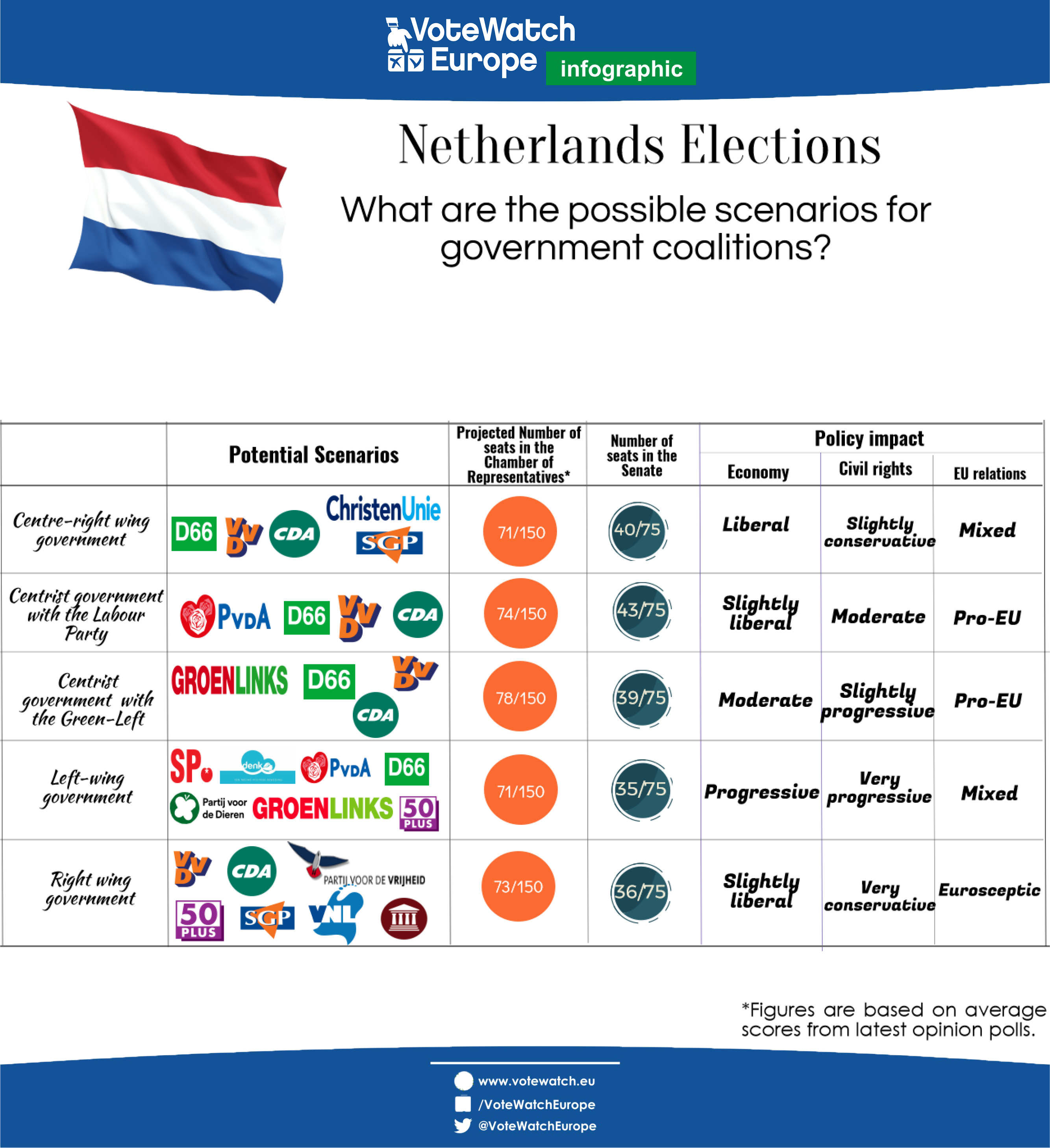 A coalition between centre-right wing parties, made up of Rutte’s People’s Party for Freedom and Democracy (ALDE), Christian Democratic Appeal (EPP) and Democrats 66 (ALDE) is one of the most likely scenario at the moment. The scores of these parties in the polls have increased over the last few weeks and they might be able to form a majority with the help of the testimonial Christian Conservatives parties (Christian Union and Reformed Political Party). This coalition would be very cohesive on economic matters, as these parties are all supportive of budgetary discipline, free trade agreements and low level of public intervention in the market.

On the other hand, it will be more difficult to find agreements on social issues (such as multiculturalism and abortion) given the contrasting views of the Christian parties with the liberal progressiveness of D66. The liberal D66 party would also be at odds with its coalition partners on environmental policy. These subjects are likely to be highly relevant during the negotiations preceding the formation of a government.

This government would be overall supportive of the European Union, although parties such as VVD and CDA have gradually become more critical of Brussels and Eurozone governance, as a way of reacting to the rise in the polls of Wilders’ Party for Freedom. For example, Rutte’s VVD is among the few governing parties in the countries that share the Euro currency to have voted against the creation of separate governing structures for the Eurozone, these structures being proposed as a way to speed up integration within the Euro-area. This “Euro-cautious” trend in the Netherlands is likely to continue, as the new government will have to stave off the attacks of the far-right opposition. This means that far-reaching proposals aiming at establishing a budget for the Eurozone and stepping up the defense union might not be warmly welcomed in the Hague.

In this scenario, VVD, CDA and D66 will find an agreement with the centre-left Labour Party (S&D) to form a new government. Compared to the first scenario, this would entail a slightly less liberal economic policy and a more progressive stance on social issues and the environment. This new government would hardly mark any change with the status quo, apart from the decision making process, which will be slower because of the higher number of parties in government.

This government would be more supportive of the European Union than the one outlined by the first scenario, because it would not need to rely on the support by Eurosceptic Christian conservatives parties. However, each of these parties (apart from D66) has some reservations on some of the ambitious proposals regarding either the Defense Union, the Eurozone or the enlargement of the EU. This means the equilibrium of power within the government will be key in determining the future positioning of the next executive in the Council of the European Union.

This scenario would be somewhat similar to the second, with the Green-Left taking the place of the Labour party. The party led by Klaver has been polling well and a good performance on the 15th March might drive the party in government. However, compared to the Labour Party, the Greens are much more opposed to free-trade agreements and this would be a major factor of instability in the executive when it comes to ratifying free-trade agreements. The party is also more to the left on public spending and strongly opposes austerity, which would put the party on a collision course with its fellow partners in government.

The strongly progressive views of the party on social issues would resonate well with D66, although this might generate conflicts with CDA. Compared to the previous two scenarios, this government would be more unstable (with the conflicts on trade adding to the other fault lines), although the strong orientation of Dutch parties for deal-making and consensus-building arrangements should not be underestimated.

Another scenario would entail the establishment of a left-wing government made up of the Green-Left, the Labour Party, the Democrats 66 and the far-left Socialist Party. In order to reach a majority, this coalition might also need to attract the external support of testimonial parties such as the Party for the Animals, 50 PLUS (representing elderly) and DENK (representing ethnic minorities). The high number of parties needed to form this coalition makes such a scenario rather unrealistic.

In case this coalition is formed, there would be a dramatic shift of Dutch economic policy to the left: more public spending, higher taxes for the upper classes and opposition to free-trade agreements. These policies would put the governing parties in conflict with the liberal-minded D66, unless the centre-left members of the coalition decide to moderate their positions on the economy, although this might upset the Socialist Party. Therefore, it would be very difficult for this government to reach compromises on economic policy and hence play a strong role in the Eurozone policy-making.

This government would also have to distribute perks to the testimonial parties in exchange for support: stricter regulations on animal welfare, lowering of the retirement age and further measures to counter racism. However, this government would be more cohesive on migration, environment and social rights and less on economic matters.

The relations with the EU would be another source of tension in the cabinet, in particular with regards to macro-economic coordination within the Eurozone, the Defence Union and the relations with Russia.

The participation of the far-right Party for Freedom in the next Dutch government does not seem realistic at the moment. Furthermore, the recent worsening performance of PVV in the opinion polls would decrease its negotiating power (unless it manages to turn this trend around).  However, we need to take it into account as there are precedents. What could happen if the other right-wing parties end up with no other choice than forming a coalition supported by the PVV?

Such a government would be somewhat similar to the first Rutte government formed in 2010, but this time also the Christian conservative parties, 50PLUS and the other small far-right parties will be asked to to join the CDA, VVD and PVV in supporting the new government. Considering the failure of the previous experiment, it is very difficult to expect such a government to be very stable.

The staunch conservative approach of such a coalition on migration and social issues would turn off the moderate members of VVD and CDA, whereas the populist stances of PVV on the economy would create conflicts with the other partners, which are more liberally minded.

But the relations with the European Union would be the major sticking point, as PVV advocates for the Netherlands to quit the European Union, exit Schengen and bring back the national currency. These proposals would never be accepted by VVD and CDA, which, despite their sometimes-critical stances on the direction of the EU project, remain committed to keeping a good relationship with the other EU partners.

Other potential scenarios: from large coalition to chaos

Depending on the actual electoral results, we can expect other scenarios, such as the establishment of larger coalitions than the ones mentioned in this article. It comes without saying that, the larger a coalition is, the more erratic and unstable the next executive will be.

It is also possible that the elections will lead to deadlock, given the difficulty of assembling a coalition with such a high number of parties. In this case, it is still very early to forecast what could happen in case of a second electoral round.

For more political data and forecast on EU political trends, contact us at [email protected].

The infographic below summarizes some key positions taken by the Dutch parties while participating in the EU decision-making process over the past 2 years:

For more data-driven political analysis and forecast, contact us at [email protected]

Also read: Future of the EU: which scenarios are more likely to unfold?