Home Votewatch » What allies can the Polish PiS government rely on in the European Parliament?

Today, the Polish PM Beata Szydlo will debate with MEPs the developments in Poland since her party, Law and Justice, took power last year. The discussion promises to be tough as the Polish government confronts outspoken EU critics after it has passed a series of controversial measures, including Constitutional Court and media reforms. The adoption of an EP resolution was postponed until February, but parliament’s president, Martin Schulz, said he expects an “extremely lively discussion”.

The infographic below summarises the key actions for which some European leaders have criticised the new Polish government. 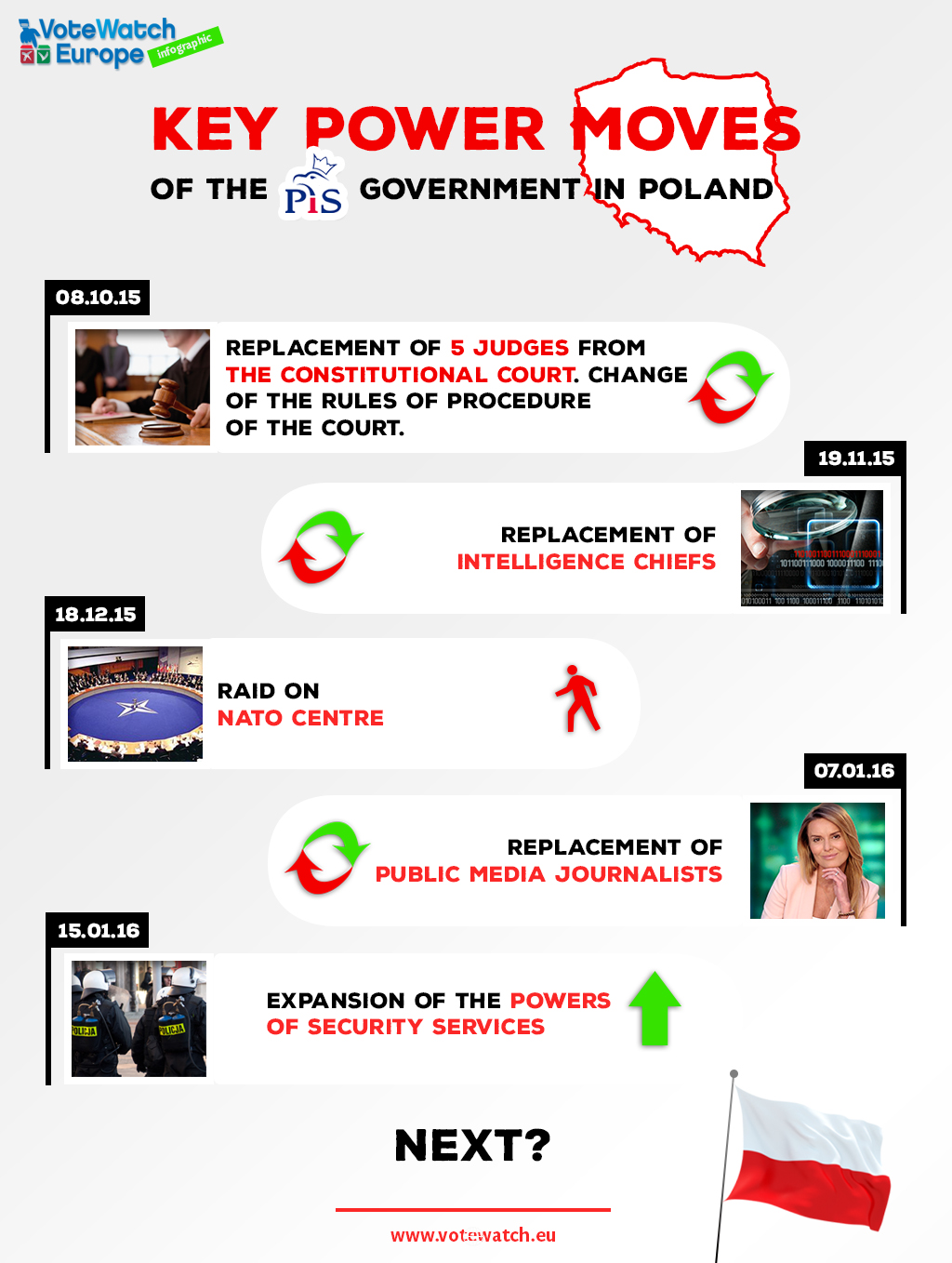 The tension has risen between Polish officials and the EU after the European Commission has launched an unprecedented investigation last week to see if Poland breaks EU democracy rules. This decision to trigger the rule of law’s procedure is the first step towards possible sanctions against Poland for violating Union’s democratic standards. In letters addressed to the Commission’s vice-president Frans Timmermans, the justice minister Zbigniew Ziobro responded harshly to the Commission’s request to clarify the recent amendments passed by the ruling Law and Order party (PiS) in Poland. In the meantime, Martin Schulz (S&D) has qualified these late measures of a “coup”, while Guy Verhofstadt (ALDE) has said Szydlo was “driving Poland’s relationship with the European Union to a new low”.

However, while the Polish government has been under EU criticism, it might count on some allies during the plenary. Unlike Hungary’s ruling Fidesz party, PiS is not an EPP member (it sits in ECR). However, Fidesz and some other EPP factions may rally behind PiS. Moreover, the ruling British Conservative party, which is part of ECR, could be a powerful ally for the Polish government. The Tories need PiS to support EU reforms, especially on freezing welfare for EU migrants. British conservative MEP are likely to back the Polish claim that the EU shouldn’t interfere in this case with Polish matters.

The infographic bellows shows who are the closest possible backers of PiS, based on a measurement of ideology matching. The data shows that the British Conservatives are the closest possible ally for PiS, having consistently voted along them throughout this term, and that from among the EPP parties, Fidesz is by far the closest to PiS. Also, the liberals and the groups at the left are much less likely to share the views of PiS. 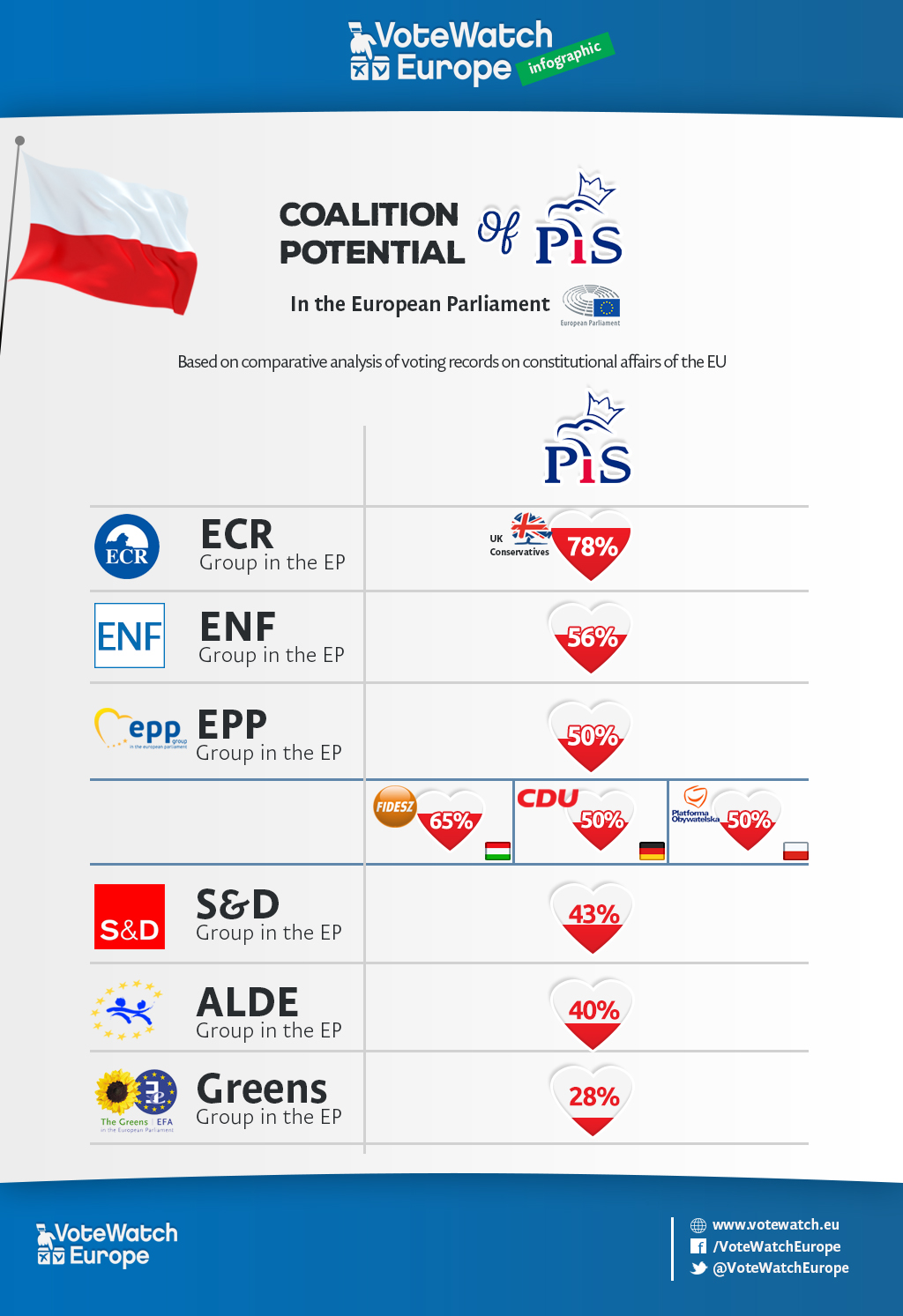 On May 27th, 2015, the former parliament voted on the passage of amendments to the judicial system, its main purpose being to shorten the handling of cases in court. Back then, the Law and Justice party criticized the actions taken by PO saying that it “violated the principles of Poland’s democracy.” Before the parliamentary elections, Civic Platform (PO) has introduced changes in the Constitutional Court choosing five new judges. This was enabled by a new law signed in July by the former president Bronisław Komorowski. The judges were allegedly changed because of their ending term. The problem was that the term expired only for three judges, while the other two judges would have finished their term at the beginning of December and the new judges would have been elected already by the new parliament. Some critics of PO say that this decision was taken due to fears of the parliamentary elections in October, so the party decided in June that before October it would select five new judges of the Constitutional Court. This would mean that the judges appointed by PO could reject future bills that the government would submit to the new parliament. On October 8th, 2015, five new judges were elected in the Constitutional Tribunal by Civic Platform.

Shortly after, PiS won the parliamentary elections. The party passed a resolution that invalidated the appointment of all five judges without the court’s decision (including of the three judges who replaced persons whose term had ended) and allowed it to replace all five of them.

On December 18th, another move of the new-elected government caused controversy.  At 1:30, on Ministry of Defense’s orders, Polish military police raided the NATO counterintelligence center in Warsaw (where the Polish and Slovak officers work). Following the intervention, the Minister of National Defense Committee appointed a new director of the institution.

On Thursday, 7th January, a new media legislation came into force after being signed by President Andrzej Duda. The new media legislation allowed the parliament to take over the state television and radio broadcasters. Media previously known as “public” were renamed “national”. The Polish Press Agency, TVP, Polish Radio and 17 regional radio stations were transformed from commercial companies into national institutions. Each national media will be managed by a director, who is also his editor-in-chief. Supervision of each of the media will hold the specially appointed National Media Council. The new management of the polish television (TVP) fired all journalists explaining that they “did not fit the new concept”.

According to the new regulation, the national media are to “respect the Christian system of values”. The most important mission of the institution of the national radio and television will be cultivating national traditions, patriotic values and the humanities, promoting the achievements of Poles, “popularizing various forms of civic activities, facilitating access to objective information and creating conditions for a debate on public issues – by offering diverse programs and other information services”.

On January 15th, the Polish parliament approved an amendment to the existing surveillance legislation. According to the law, the operational control will consist in electronic eavesdropping, control of correspondence (including electronic one), watching people in public places, transportation means (and also places other than public), consignment controls, obtaining data from storage medium, information and telecommunications systems. The investigators will be also able to access billing information for specific phone numbers. Objections to the bill were submitted, among others, by the Polish Ombudsman, Inspector General for the Protection of Personal Data, National Council of the Judiciary, Supreme Bar Council and the International Helsinki Foundation for Human Rights.

Critics of PiS government stress that party’s latest actions may impress some eurosceptics and their supporters in Poland, but jeopardize country’s position in the international arena and soon the new investments in Poland will be exposed to risk. The others say that the current situation should be handled on the national level and Brussels’ involvement can be counter-productive.