Home Votewatch » VoteWatch CEO among the most influential players in Brussels 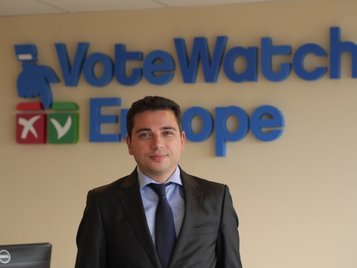 Doru Peter Frantescu, CEO and co-Founder of VoteWatch Europe, was mentioned  by a recent Politico report as one of the most influential players in the context of the Romanian Presidency of the Council of the EU. Since the first ever Romanian Presidency, which began on January 1st, is expected to cope with a big number of challenges for the EU: Brexit, the approaching European elections and the approval of the next multiannual financial framework, the practitioners mentioned in the report are expected to have a word to say in the “changing and treacherous political and diplomatic landscape” over the next 6 months. The same study says that “VoteWatch will be one of the go-to sources to assess MEPs’ voting records and policy choices in the last five years, ahead of the 2019 European election”.

VoteWatch is the leading non-partisan organization specialised in combining big data sets of EU political data with cutting-edge expertise in order to provide the best insights into EU politics. We provide comprehensive mapping of the positions of EU Governments and of EU Parliamentarians on any key topic based on confirmed facts. We also deliver forecasts on the outcome of various pieces of EU legislation. Another independent study placed VoteWatch Europe at the top of the influencers in the category of think tanks communicating on EU affairs.