Brexit will lead to a decrease in the support for a more flexible labour market across the European Union. In fact, over the decades, the British government opposed several EU initiatives aiming at stepping up worker protection, as they implied higher costs for businesses as a whole. The debates regarding the flexibility of the labour market have long haunted the different European institutions, which constantly hesitated about the positions they should adopt while trying to satisfy countries with heterogeneous views on the question. One of the most prominent issues is related to the posting of workers across the EU, as the current legislation is seen as providing incentives to Western European companies to hire Central and Eastern European workers at the expense of the locals. CEE workers can afford lower wages, as the cost of living in their home countries is much smaller, which leads to the frustration of the Western workers who cannot afford such wages due to higher living costs in countries such as France or Germany. In this report, we tracked the level of support at the EU level for a stricter regulation of the labour market, with a special focus on posting of workers and the use of atypical contracts.

We found that much disagreement was to be found within the parliamentary groups themselves, which highlights the different national sensitivities. Perhaps not surprisingly, Central European politicians tend to rally behind policies of liberalization of the labour market, whereas Southern MEPs advocate for a higher degree of regulation of economic activities. However, whereas left-leaning groups tend to be more cohesive on this subject, the main divisions on the votes regarding the question of the posted workers and the zero hour contract occurred within the European People’s Party and the Liberal of ALDE. Although these groups are considered to be the most supportive of free market and are thus the most inclined to promote more flexibility, their members have different views on posting of workers depending on what they perceived as their “national interest”. This analysis tracks the positions of key political actors on the future of employment policy in the EU.

The 1996 directive establishing the free movement of posted workers is under increasing criticism, its detractors claiming that lower wages and social protection for posted workers allows  them to undercut the competition of the local workers. However, if on the one hand local workers are harmed by the increased competition, on the other hand this directive contributed to increase employment in Central and Eastern Europe and increased economic efficiency in Western Europe. Therefore this issue is placing at odds the interests of workers from different countries, leading to heated debates between Member States.

Because of the increased level of unemployment in Western Europe (in particular France), there have been stronger pressures by the concerned governments on the European Commission to reform the legislation on the matter. The electoral campaign in France has provided a platform for Le Pen and Melenchon who aimed at capitalising on the frustration of the French workers, which in turn pushed Macron into intensifying action at European level. The Commission is currently promoting the so-called principle of “equal pay for equal work”, which aims at discouraging employers in France from hiring posted Eastern Europeans.

This approach has been recently supported by the European Parliament, which eventually backed the reform (446 votes in favor, 213 votes against and 28 abstentions).

However, the large support in the EP does not mirror the situation in the Council, where the national differences make a potential compromise more difficult. This cleavage is also shown by the divisions within the centre-right political group, the Europe People’s Party: all the national delegations from the Visegrad countries voted against the proposed reform on posting of workers. Some of the opposing parties are currently in government in their Member States: the Czech Christian and Democratic Union (KDU-CSL), the Hungarian Fidesz, but also Polish Law and Justice (ECR) and the Czech leading party ANO 2011 (ALDE). This vote in favor of the posted workers shows the official position of these Member States, whose workers would be severally affected by this reform (in particular in the case of Poland).

In May 2016, eleven EU Member States have shown a yellow card to the reform of the posted workers directive, warning the Commission that it was potentially exceeding its power. This procedure enabled the Parliaments of Romania, Poland, Bulgaria, Latvia, Lithuania, Croatia Denmark, Czechia, Estonia, Slovakia and Hungary to express their disagreement on this alleged violation of the subsidiarity principle.

However, skepticism about this initiative is not only limited to CEE politicians. Most members of the Austrian People’s Party and the German Christian Democratic Union voted against stricter rules (both parties are set to win their national elections this year), as well as the Rutte’s VVD (winner of the  elections in the Netherlands) and the party of Belgian Prime Minister, Charles Michel, Reformist Movement.

However, this coalition was outnumbered in the EP by a supporting coalition, which is made up of the left-leaning forces (Social Democrats, Greens and far-left), as well as about 90% of French, Italian, Spanish and Greek MEPs. All Irish, Portuguese and Cypriot MEPs back an ambitious reform of the posting of workers in the internal market.

Our voting record shows that only a watered down reform can  get enough support to pass through the Council. 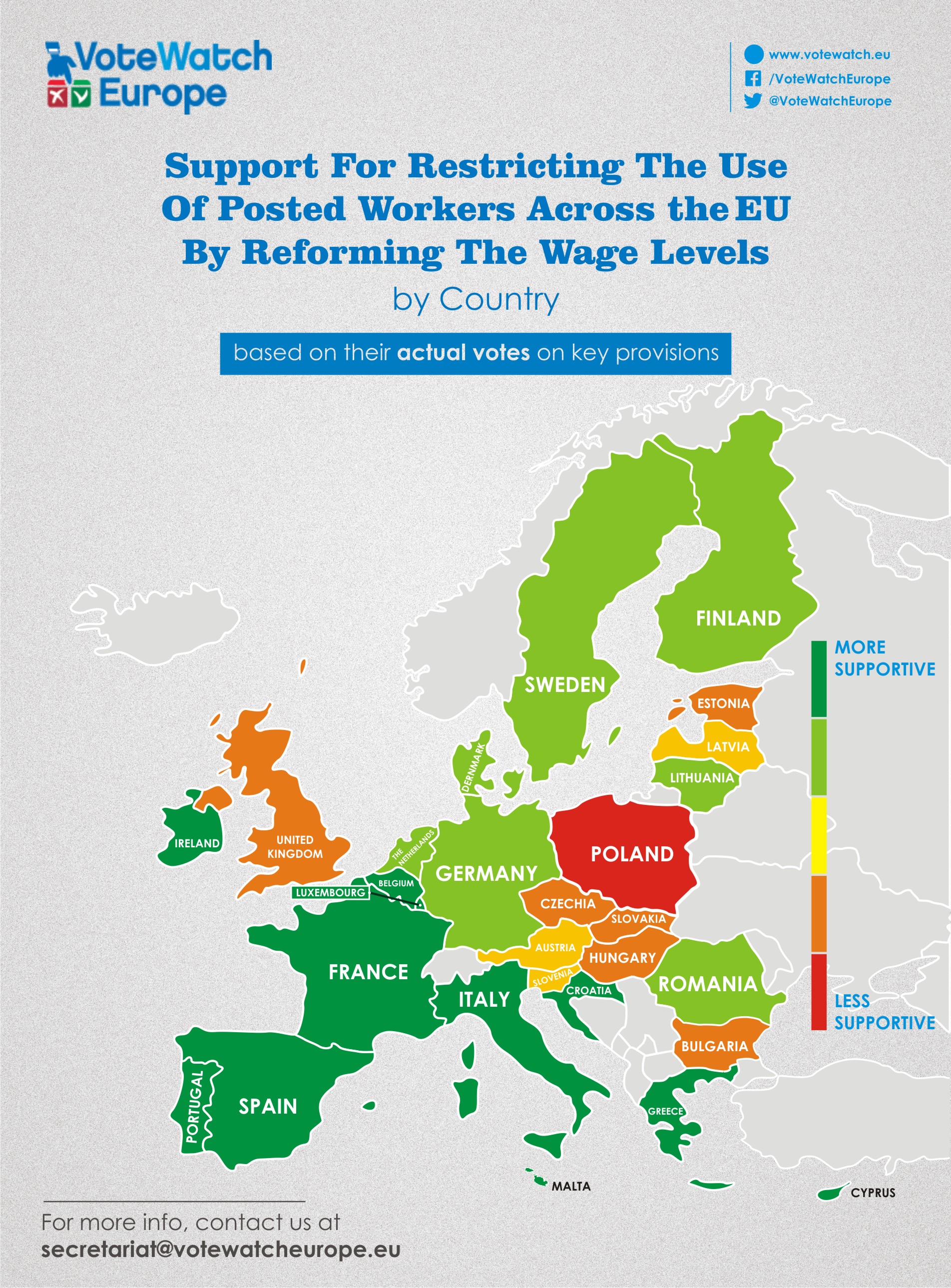 The zero hour contract, the flexibility of the workforce at its climax

Although the EU institutions have limited powers regarding the national labour legislation, the positions of policymakers at the EU level can provide valuable clues about the overall direction of the EU labour policy, in particular within the process of economic convergence within the Eurozone.

The liberalisation of the labour market was one of the main solution put forward to address the decreasing competitiveness of European economies. However, wage inequality and the surge of atypical job contracts, which provide the workers with a lower level of protection, spurred intense backlash in some Member States.

One of the most prominent atypical contract is the zero hour contract. In the zero hour contracts the employer has no need to mention any minimum hour or a minimum wage that the worker has to perceive in order to be employed, leading in this sense to insecurity for the workers. On the other hand, these contract have been praised for providing both workers and employers with more flexibility, particularly in case of employment of students or second jobs.  The European Parliament massively rejected the use of zero hour contracts reiterating “its view that the prevention of zero-hour contracts should be considered in all future employment policies”. 474 MEPs voted in favor, whereas 165 defended the use of these contracts.

Many politicians voted along the lines of their political groups, with the left opposing the use of these contracts, while the free-market oriented ECR adopted an opposite stance. On the other hand, more nuanced views were observed (also in this case) in ALDE and the EPP.

Whereas the Belgian Liberal parties opposed this extreme version of atypical contract, their Dutch colleagues were far more supportive: none of the Dutch parties currently in negotiations for forming the new government rejected the use of this instrument.

While 97% of French MEPs backed the critical position of the Parliament on these tools, the positions of German policymakers are more diverse: Angela Merkel’s party was divided, whereas the Free Democratic Party (potential coalition partner in the next government) supports the use of this flexible instrument. As expected,  Martin Schulz’s SPD backed the proposed ban. 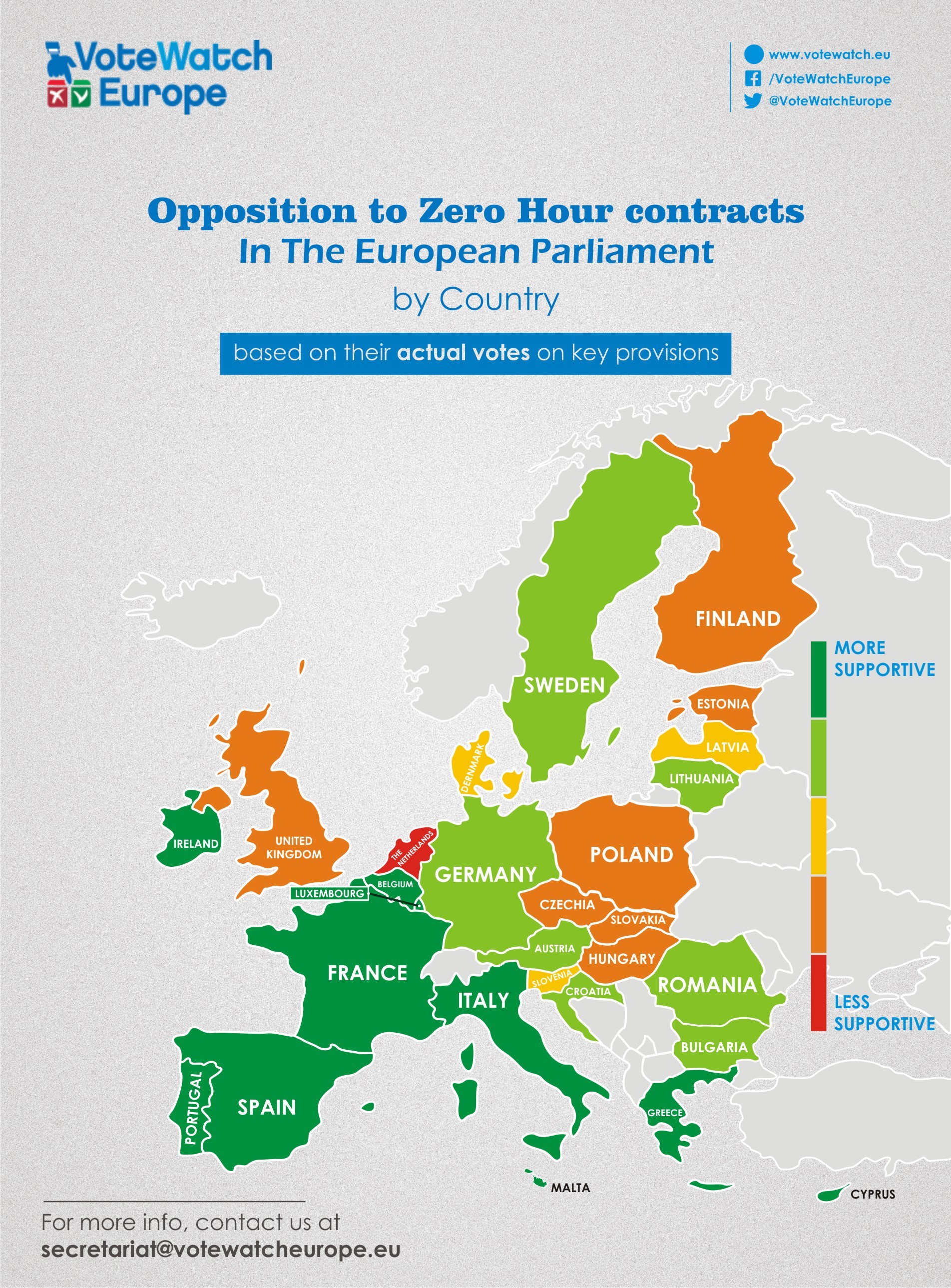