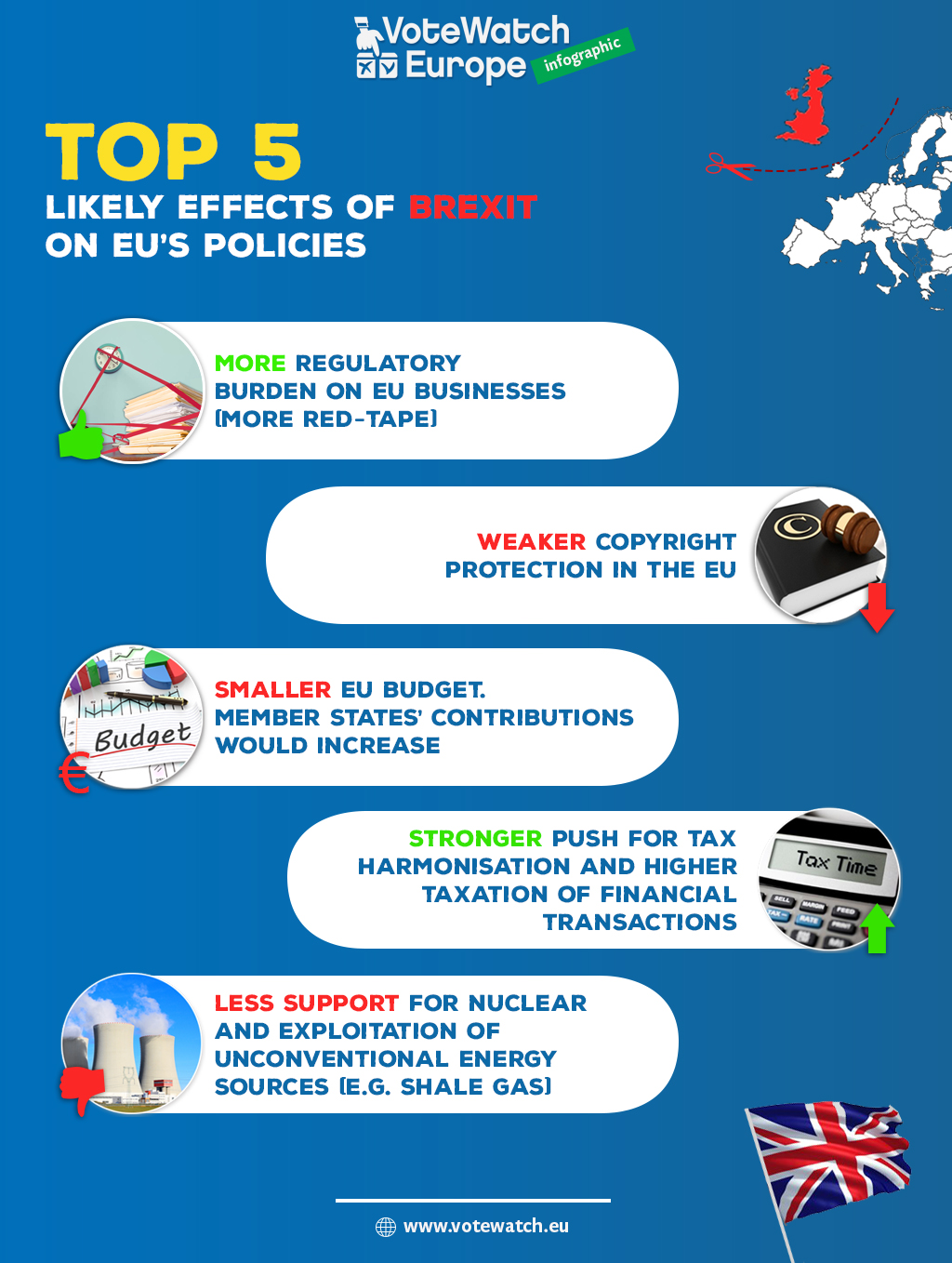 With the perspective of the Brexit referendum looming ahead, many analyses that show the impact of this move on the economy in both the UK and the rest of the EU are published. Our analysis takes a different angle, looking at how the direction of the EU policies is likely to change in the absence of the UK representatives from the EU decision-making bodies.

In short, if UK leaves the EU, this will change substantially the dynamics in the EU institutions. A Council of 27 members and a European Parliament lacking the British MEPs would see a substantial shift in the balance of power in favour of the pro-social/interventionist political forces, i.e. those who push for stronger intervention of the state in the economy and the redistribution of income. On the other hand, the forces that support free market, less red tape and a more competitive Europe would suffer a substantial blow.

Most of the British politicians, who play a direct role in the EU Institutions, are favourable to the free market. In the Council, David Cameron’s conservatives. In the European Parliament, most of the British MEPs are on the centre-right side of the political spectrum (Conservatives in the ECR group, and UKIP in the EFDD group), while the Labour MEPs are much less prone to support extensive regulation than their Socialist colleagues from other countries, for example France.

Here is how the structure of the political groups in the European Parliament looks like with and without the British MEPs:

We have run a simulation to see how some of the key decisions made in the European Parliament in recent years would have looked like if the British MEPs would not have been there to vote. On the basis of that, we can imagine how future EU legislation might look like, if it is made without British MEPs (and no other significant factors would emerge). Needless to say, this is not a comprehensive analysis, but it is meant to showcase some trends that are likely to develop, based on current facts and figures.

British politicians are substantially more favourable to reducing red tape than their continental counterparts. If they no longer take part in the decisions regarding the internal market, the pressure on the EU decision-making apparatus to simplify legislation and reduce red-tape would be much weaker. On the contrary, the forces that are of the opinion that reducing red tape has a negative impact on labour and environmental standards will become stronger and will find it easier to influence the decisions their way.

For instance, in May 2015 nearly all British Members of the Parliament (MEPs), regardless of their political family, supported a move to cut red tape. Concretely, they all voted in favour of a paragraph that backed the European Executive’s approach to withdraw from the legislative process those bills that are considered obsolete or that are suspected to add too much administrative burden on the institutions and businesses working across the EU.

The provision was adopted by 412 votes in favour, 258 votes against and 11 abstentions. Without British Members, the majority supporting the cut of red-tape would have been definitely smaller: the result of the vote would have been 357 in favour, 251 against and 10 abstentions. The smaller the EP majority behind a Commission proposal gets, the more the Commission becomes hesitant to change course of policy. Notably, within the S&D group the British Labour delegation had a different opinion, voting alongside the centre-right in favour of less legislation. The statement was part of an own-initiative EP report dealing with green growth opportunities for SMEs.

Similarly, British MEPs from the three main delegations, Conservatives, Labour and UKIP have traditionally supported a more flexible labour market, being of the opinion that this is needed in order to strengthen the competitiveness of the European enterprises. They have also voted against the introduction of minimum wages across the EU. In the case of Labour MEPs, their positions have sometimes even gone against those of their continental colleagues in the Socialist group, such as in the latest EP report titled “Creating a competitive EU market for the 21st century” voted in September 2015.

Effect no. 2: weaker copyright protection in the EU

In September 2010, the EU Parliament adopted a report titled “Enforcement of intellectual property rights in the internal market”. The final shape of this non-legislative resolution was largely in favour of strengthening the position of rights holders and asked the introduction of a set of measures to combat IPRs infringements in an effective manner. The text was controversial and was approved by a small margin of votes. The resolution was adopted by 328 votes in favour to 245 against and 81 abstentions. The MEPs from the two main British delegations, Labour and Tories, all voted in favour of the text. Notably, Labour MEPs did so even against the line of their Socialist continental counterparts.

In the absence of UK Members the score of the vote back in 2010 would have been 295 votes in favour, 225 against and 78 abstentions. After the 2014 EU elections the majority supporting stronger copyrights has diminished substantially and without the British MEPs it would no longer be a majority at all.

Effect no. 3: EU budget as a whole would be smaller, while Member States’ contributions would increase

The disputes between Brussels and London on the matter of how much the UK should contribute to the common coffer are no news. According to the Treaty, the UK enjoys the famous rebate, which allows it to pay less money, proportionally, than the rest of the Member States. Additionally, British politicians try to reduce their contribution to the EU also indirectly, by reducing the EU budget as a whole (which would automatically reduce British contribution proportionally). Concretely, the British government takes this view in the Council every time it has the chance, but also most of British MEPs do so when voting in the European Parliament.

In the autumn of 2014, the pro-EU political groups were able to push forward a report on the draft EU Budget for 2015 reversing the cuts that were proposed by the Council. The text was adopted by 464 votes in favour, 186 against and 46 abstentions. The vast majority of British MEPs from all political families voted against the requested increase in the EU budget. Therefore, without the presence of the UK Members, the opposition to the augmentation of the budget would have been much weaker: 460 votes in favour to 125 against.

The same happened more recently when voting on the resolution addressing the 2016 draft budget. This time again, the text welcomed the fact that the draft general budget of the EU for 2016 increased the funding in several domains such as security and foreign policy. The text was supported by 422 votes in favour, 173 against and 85 abstentions. Yet again, British MEPs from all political groups voted against the resolution. If they had not taken part in the vote, the result would have been 421 votes in favour, 116 against and 78 abstentions.

Consequently, in the case of a Brexit, the total EU budget would be certainly smaller without the British contribution. On the other hand, the Commission and the Parliament would have bigger chances of pushing for bigger contributions from the remaining Member States in the absence of British opposition.

Effect no. 4: stronger push for tax harmonisation and higher taxation of financial transactions

If the British MEPs had not been there to vote, the harmonisation of taxation across the EU would have been more likely. An illustration of this is the rejection of a call for EU-wide tax harmonisation that took place in March 2015.

The Socialist, Liberal-democrat and Greens/EFA MEPs wanted to adopt a measure calling the EU to put forward tax harmonisation measures. The proposal was rejected, by 308 votes in favour to 370 against, as most of the centre-right MEPs (People’s Party and Conservatives) voted against tax harmonisation. Interestingly, inside the Socialist and Democrats group, the British Labour delegation disagreed also with the position expressed by their continental counterparts and voted alongside the centre-right. Without the UK Members, the majority against the harmonisation of taxation would have been much thinner: 298 votes in favour and 317 against.

Moreover, if UK MEPs were to leave the EU Parliament, a stronger drive for normalising financial transactions would emerge. This can be observed on a vote over a paragraph within the report “EU Semester for economic policy coordination for 2015”. On this occasion, a centre-left majority succeeded in pushing for an explicit call for the adoption at Council level of an ambitious financial transaction tax (FTT). The provision was adopted by 353 votes in favour, 317 against and 27 abstentions. Without the British EU Parliamentarians opposing the paragraph, the majority in favour of the regulation of financial transactions would have been even stronger.

Supporters of nuclear energy would lose a strong ally in the EU institutions if the British MEPs were to leave the Union. UK members are usually opposing provisions demanding the phasing out of nuclear energy. This was the case for example when voting on an amendment within the report “EU Energy Security Strategy”. The amendment was calling on the Member States and the EU institutions to phase out subsidies and other public funding for new and existing nuclear facilities. The call for the phasing out was rejected by 248 votes in favour and 419 against. With no UK Parliamentarians, the result of the vote would have been 239 votes in favour and 360 votes against. In other words, the pro-nuclear camps would become smaller.

Similarly, there would be less backing for exploiting unconventional energy resources such as shale gas. Another amendment on the same report asking the Member States “to refrain from any shale gas exploration and exploitation activities” was also rejected by 289 votes in favour, 388 against and 25 abstentions. Without the British delegation, the outcome of the vote would have been 276 votes in favour, 329 votes against and 25 abstentions.

Note: no (immediate and clear) substantial effects are foreseeable on EU’s policies regarding international trade, cyber security/data protection, as in these areas the British MEPs largely follow the lines of their respective European political families and thus cancel each other votes.