Home Votewatch » Tints of Green: Who Influences Environmental Policy in the European Parliament and How? 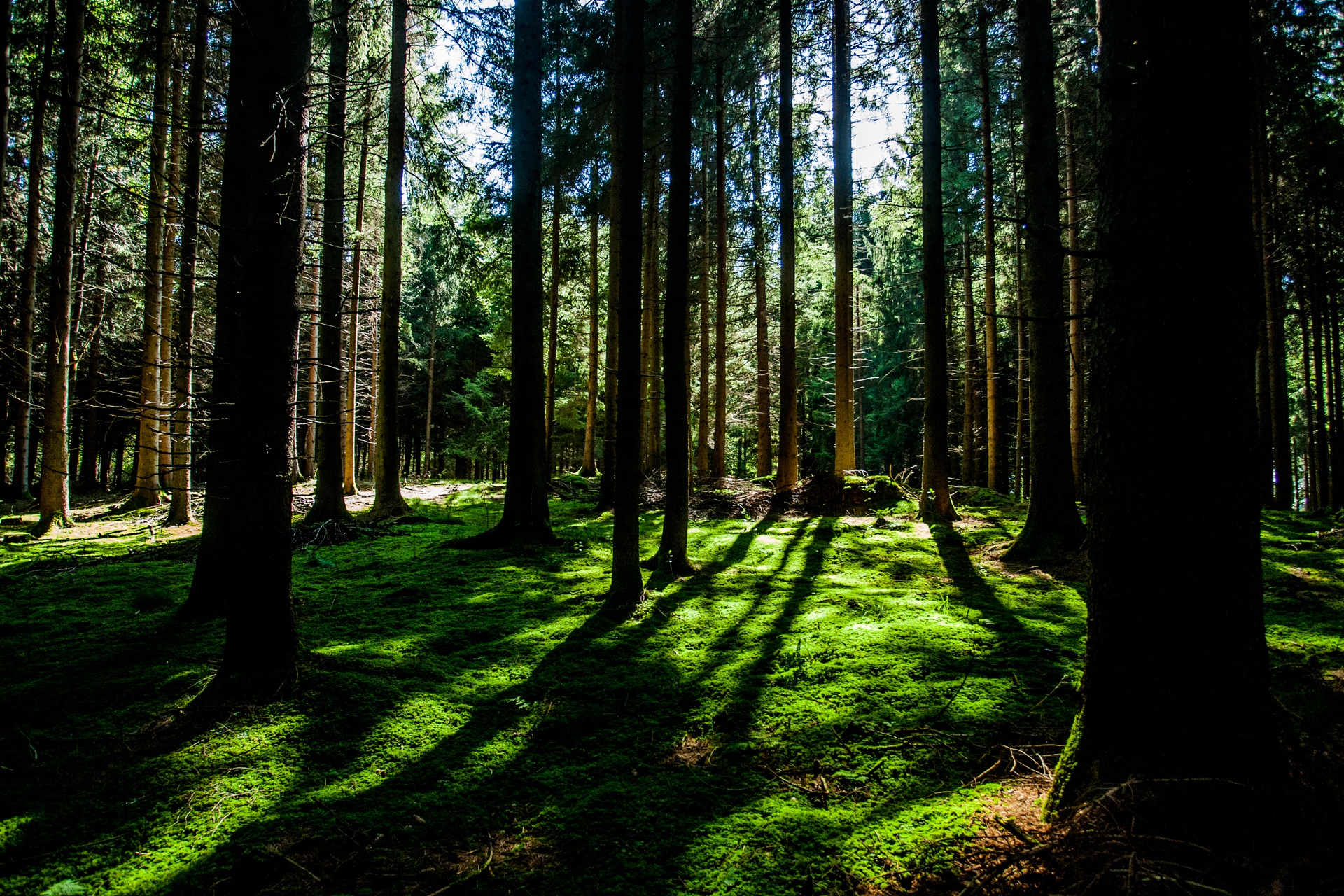 *First published on the 21st of March, this the study has been updated to take into account the report 2013/0442(COD), which was initially left out of the study due to an inaccuracy of the Legislative Observatory of the European Parliament, which is an official website of the EU institution that tracks the  legislation (and which is thus independent from VoteWatch Europe).

There is commitment at the European level to protect our air, water and soil from pollution and to promote a sustainable future. “In 2050, we live well, within the planet’s ecological limits. Our prosperity and healthy environment stem from an innovative, circular economy where nothing is wasted and where natural resources are managed sustainably, and biodiversity is protected, valued and restored in ways that enhance our society’s resilience.” This is the vision of the Environment Action Programme, that will be guiding European environment policy until 2020.

How Europe manages to transform this vision into reality greatly depends on the EU Member States. Not surprisingly, when it comes to environmental policies, countries want to go at different speeds.

Many scientists argue that time is running out and world leaders must act now to reverse environmental damage. Others take a more moderate stance, and put into the balance the economic effects that some environmental initiatives can entail. No matter on what side of the argument you stand, knowing who influences European environmental policies and in which way is paramount to understand the direction and pace of change.

That is why we set off to measure both the views and the influence exerted by each of the Members of the European Parliament (MEPs) on environmental policy, based how they influenced actual decisions, not merely their statements. Below you will find the methodology and the most significant findings. For the complete picture or if you have questions, don’t hesitate to contact us at [email protected].

Who Is Influential and Why?

We measured the environmental progressivism of European Parliamentarians based on 15 relevant decisions made during the current term of the European Parliament (two years and a half). We deliberately focused on controversial topics, that were not consensual among MEPs. For this reason, Parliamentarians who voted against an initiative, or the “environmentally conservatives,” are not necessarily opposed to environmental protection. They most likely prefer a more gradual approach to avoid some unwanted consequences of higher environmental standards, such as the creation of red tape or additional costs for businesses.

The European Parliamentarians backing these initiatives, or the “environmentally progressives,” consider the protection of the environment as one of Europe’s priorities. They advocate emissions cuts, introduction of renewables, and energy efficiency, among others.

Besides voting behavior, we measured the influence of MEPs on the basis of their activities in the Committee on Environment, Health and Food Safety of the European Parliament. We only took into account reports dealing with environmental issues, excluding health- and food-related policies. Files on the protection of biodiversity and rare species have also been included. In addition, we considered the roles played by MEPs in several intergroups of the European Parliament: Biodiversity, Countryside, Hunting and Recreational Fisheries, Climate Change, Sustainable Development and Biodiversity, and Welfare and Conservation of Animals.

We also assigned points to the MEPs who took part in the EP delegation to the key Conference on Climate held in Paris in 2015.

The algorithm we used to analyze the data has been developed with the help of more than 200 experts in EU affairs, who suggested criteria and weighed their importance. We adapted it to fit the peculiarities of the policy area under scrutiny (please find the algorithm at the end of the article). Here are the most important findings.

Southern and Nordic MEPs, the Most Progressive. Central and Eastern Europeans, the Most Conservative 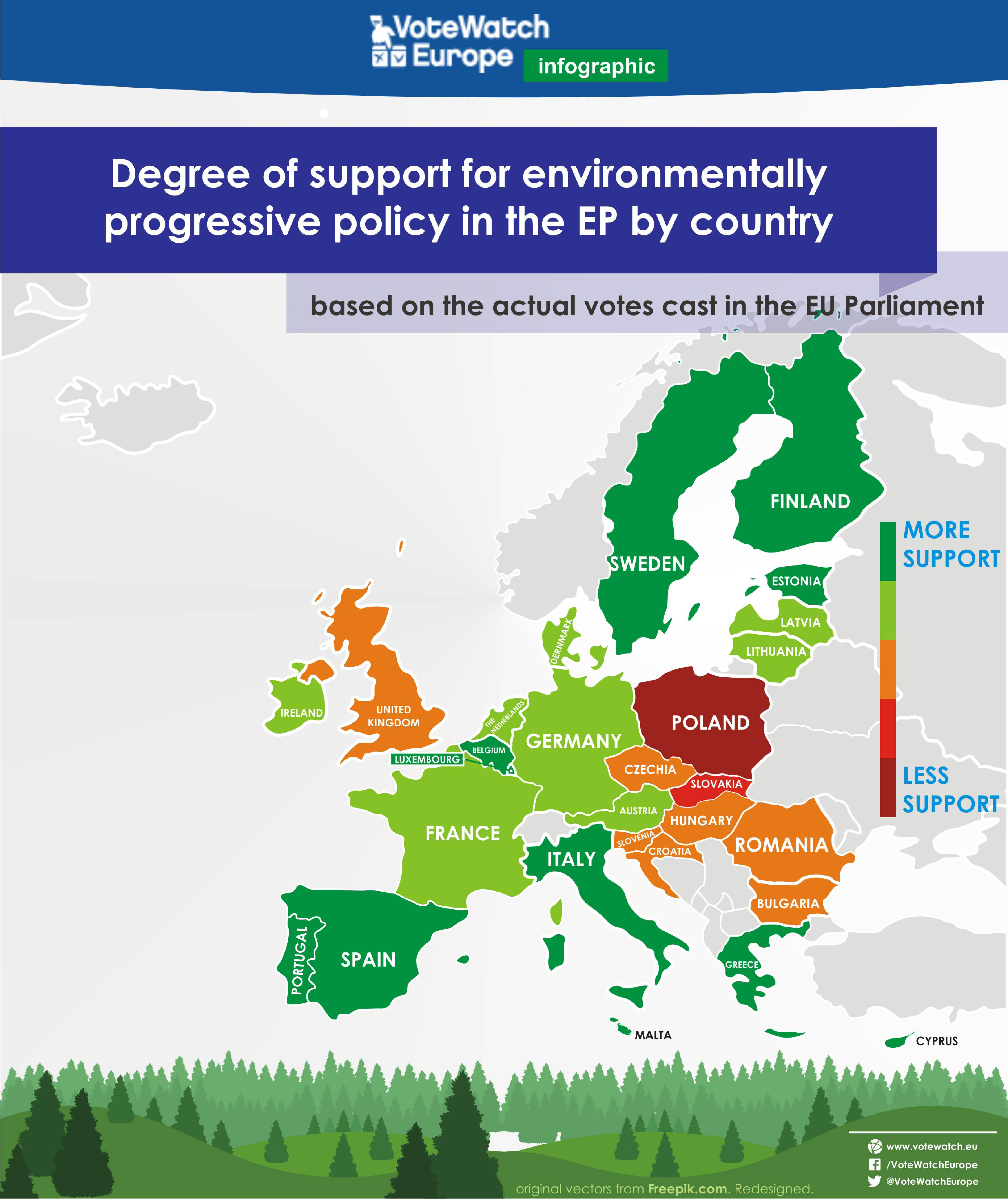 At the other end of the spectrum, Polish MEPs are (by far) the most conservative on environmental issues, followed by the Slovakians and the Slovenians. As shown by our map, post-communist delegations prefer a more gradual approach to raising the current standards. Interestingly, British MEPs are closer to these latter views than the ones promoted by their Western European colleagues. An explanation is that the largest political party from this country (UKIP) is strongly conservative on environmental matters. 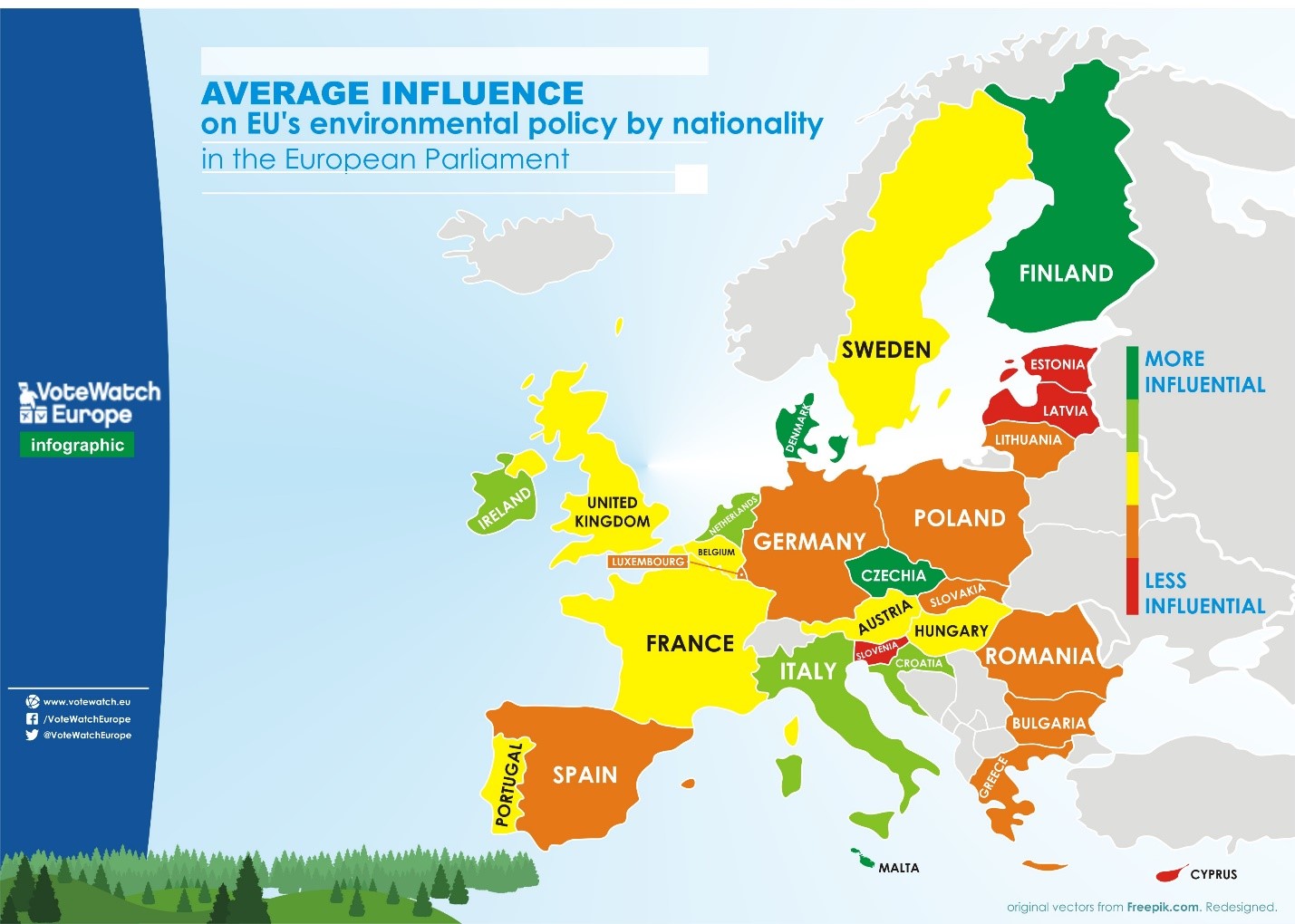 There is no correlation between certain views on environment and the influence exerted in this policy area. Per our influence assessment, Finnish MEPs are the most influential on environmental matters, followed by the Danish and the Maltese ones. Latvian, Estonian, Slovenian and Cypriot MEPs have the lowest influence across the national delegations.

Among the big national delegations, Italians are the most active on the topic, followed by the MEPs from the United Kingdom.

It’s interesting to note that when it comes to influence on this policy area, power is spread across progressive and conservative voices. It might be the undecided who tilts the balance.

For the complete picture of MEPs positions on environmental issues, don’t hesitate to contact us at [email protected].

In our analysis, a few European Parliamentarians stood out as most influential on environmental issues. Below are the most influential ten MEPs and a few of the notable activities that placed them on top of their peers. 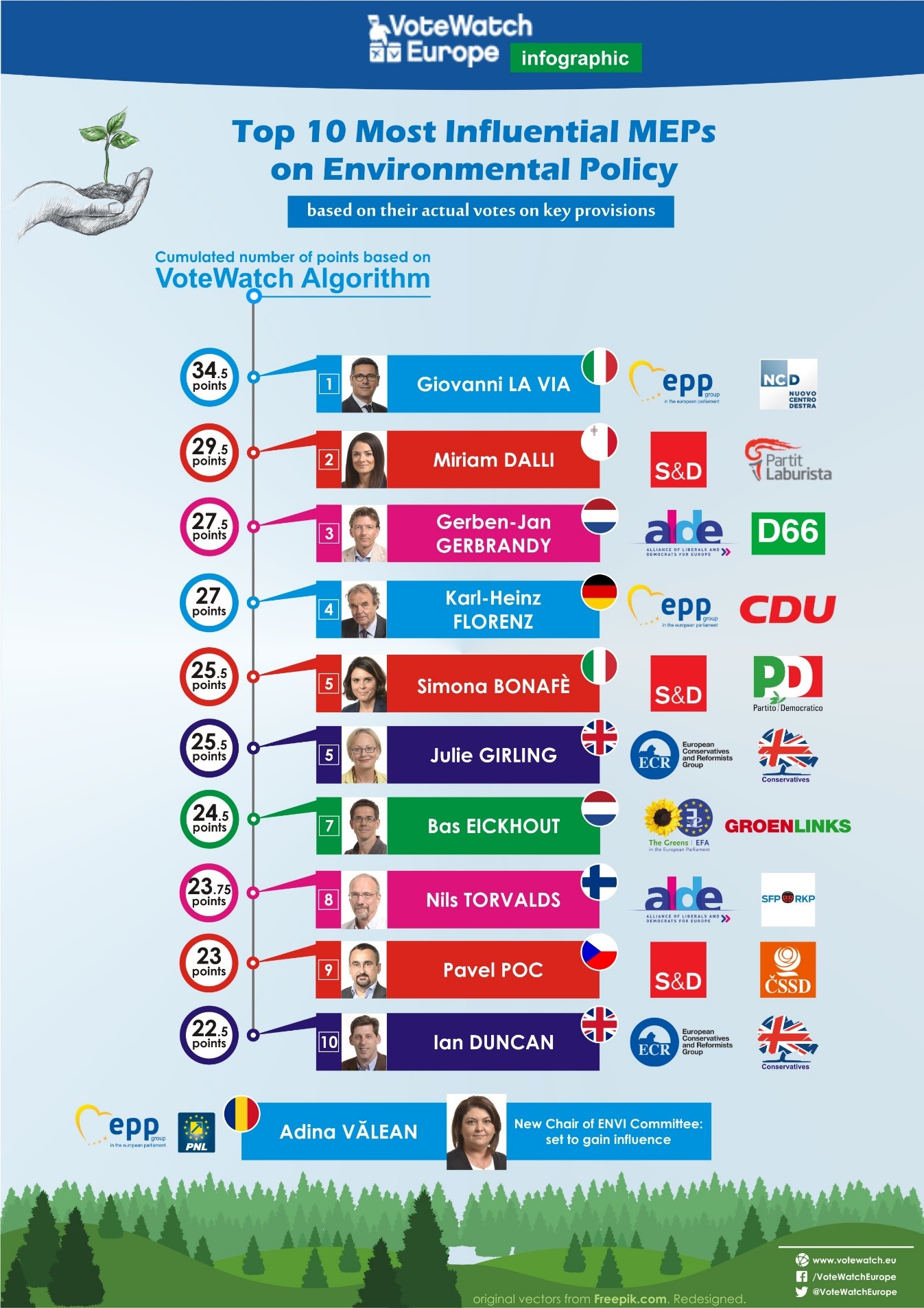 While not in top 10, Adina Valean, the new chair of the Environment and Public Health Committee (ENVI) of the European Parliament as of January 2017, will have a great influence on the direction and speed of environmental policies. The Romanian MEP is a veteran of the European Parliament and has a great task ahead: to reconcile the different and complex interests at the heart of the most influential committee on environmental issues. Her views match those of the core EPP parties and she is more economically liberal compared to the former chair La Via, but she will face an adverse left-liberal majority. Read this article for a complete profile of Adina Valean’s views.

Greens/EFA, the Most Progressive. ENF, the Most Conservative

We measured to what extent the political groups in the European Parliament are backing measures to protect the environment. Not surprisingly, the Green group is the most progressive in environmental policy, closely followed by the leftist GUE-NGL. Although more moderately, the Social Democrats and the Liberals would also like to set more ambitious standards on environmental protection.

At the other end of the spectrum, the Conservatives of ECR and the EPP are closer to the status quo. They are concerned with the additional costs that higher environmental standards would entail. The Eurosceptic groups, EFDD (despite the green attitude of its Italian members) and ENF, are the most opposed to stepping up environmental protection in the EU. These groups are also challenging the legitimacy of EU’s powers on this policy area. 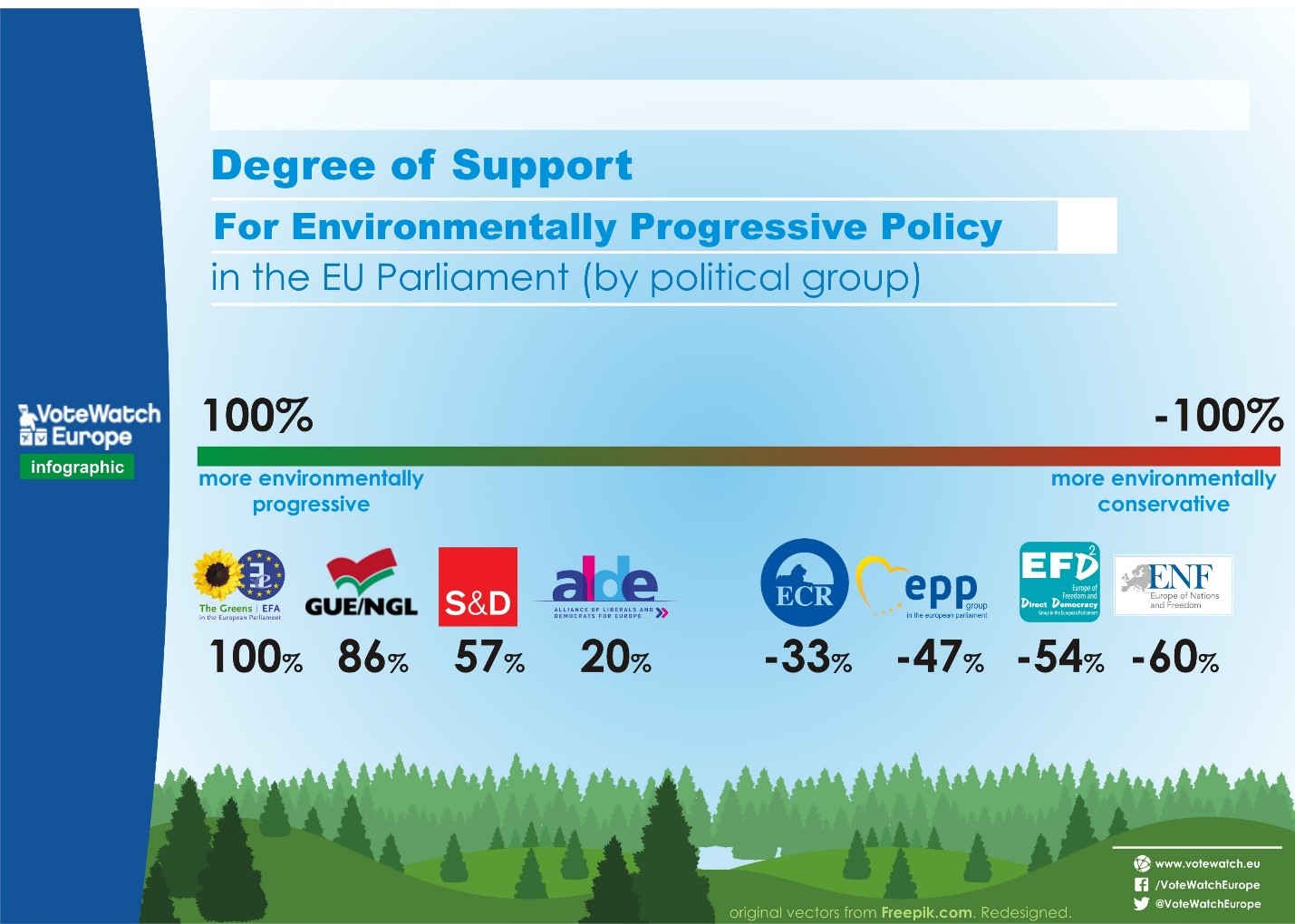 Some have strong views, others have influence. But who stands at the intersection of the two variables and can have the most impact on policies? Gerben-Jan Gerbrandy, Miriam Dalli and Bas Eickhout are the champions of environmental progressive policies, while Giovanni La Via, Karl-Heinz Florenz and Julie Girling are the conservative champions on environmental policy. 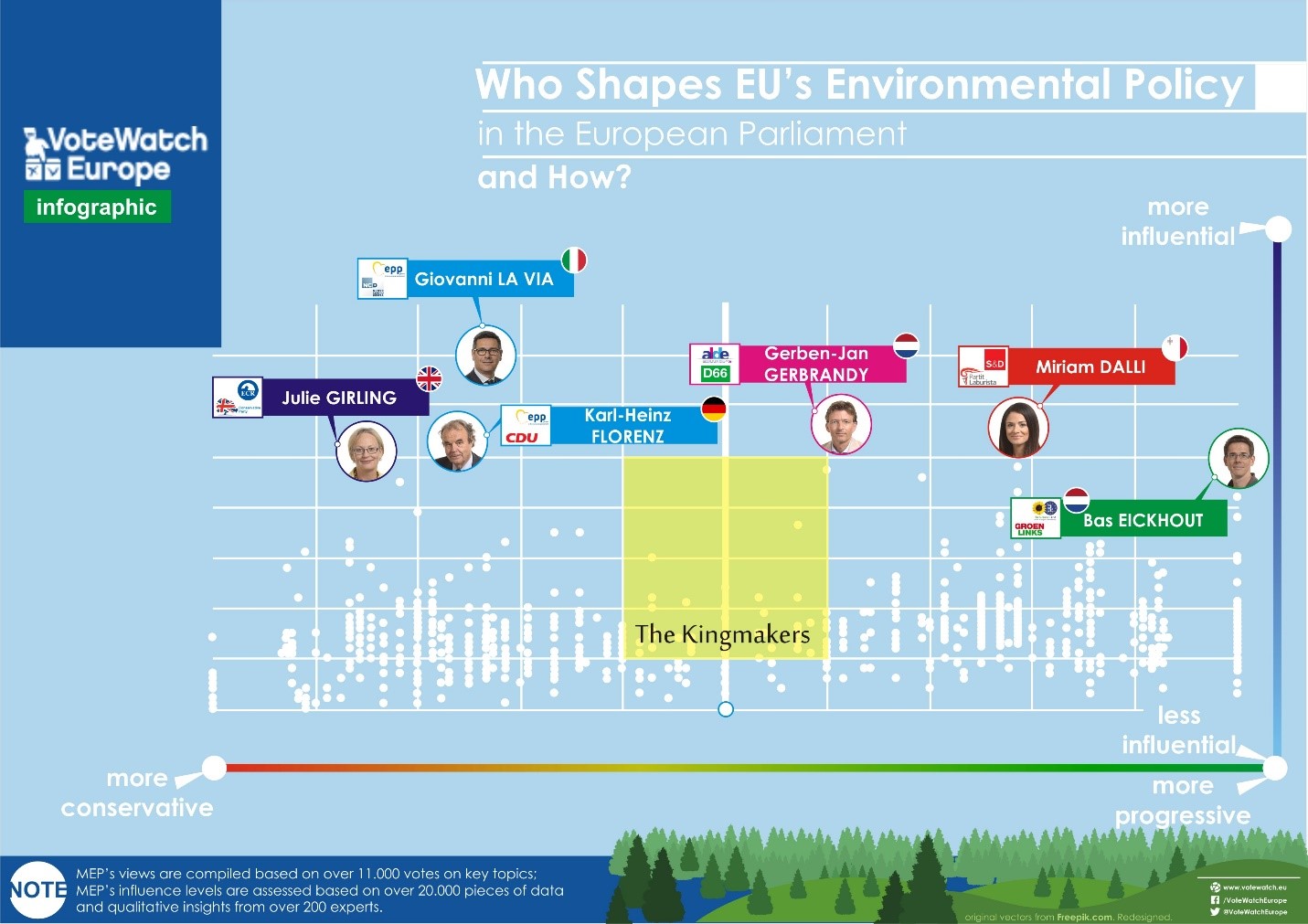 One thing is for sure: environmental issues are some of the most important and pressing matters for world leaders and policy makers. Those who hope to be part of the wind of change or who wish to temper its speed need to look closer at the voting behaviors and trends in the European Parliament, the place where all European voices are heard.

To get the full data on policy influencers or for inquiries regarding this research, contact us at [email protected]

Annex I: Most influential MEPs by country 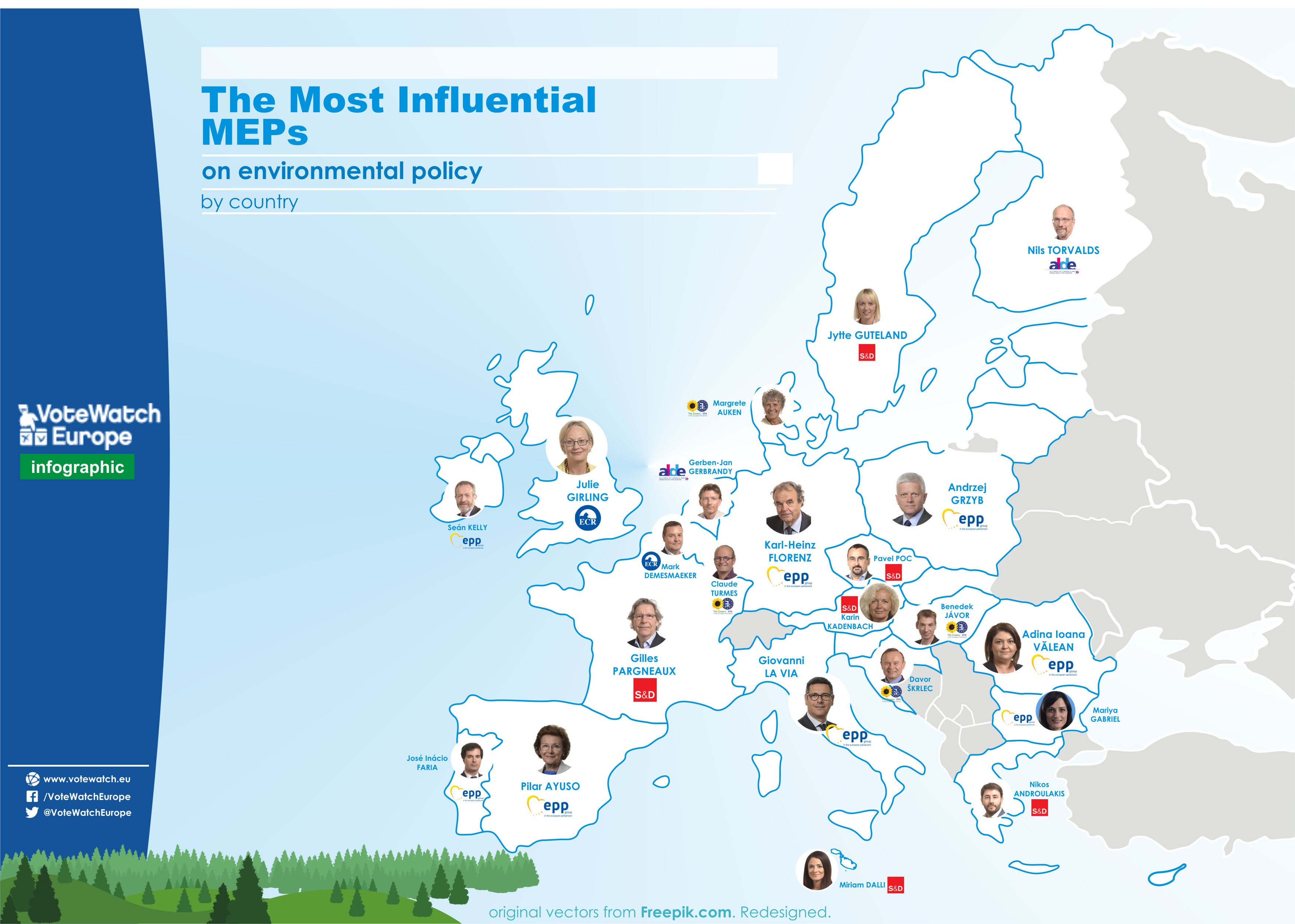 * This map was updated  to take into account the report 2013/0442(COD), which was initially left out of the study due to an inaccuracy of the Legislative Observatory of the European Parliament, which is an official website of the EU institution that tracks the  legislation (and which is thus independent from VoteWatch Europe).

Annex II: Views of most influential MEPs on Environmental policy 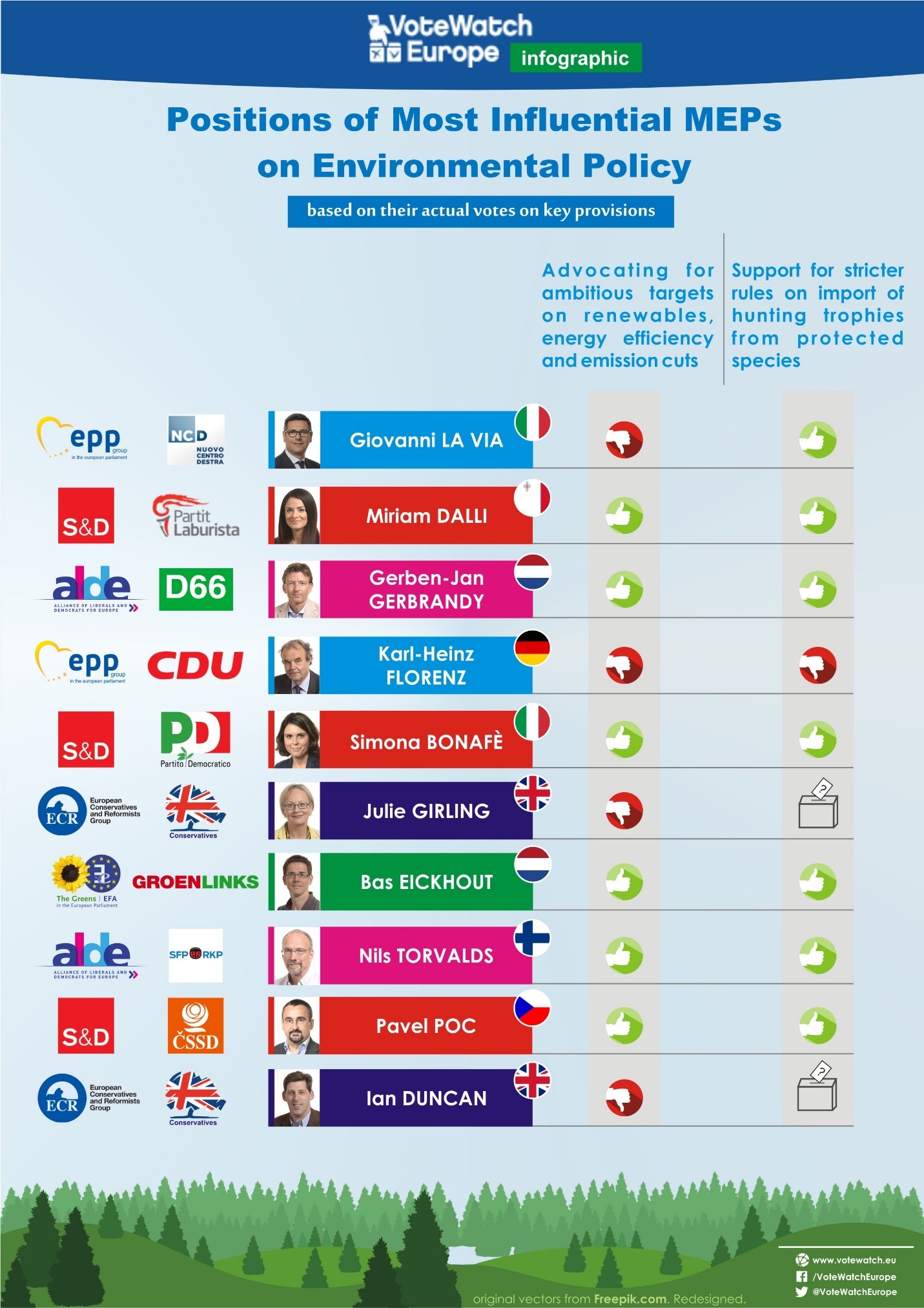 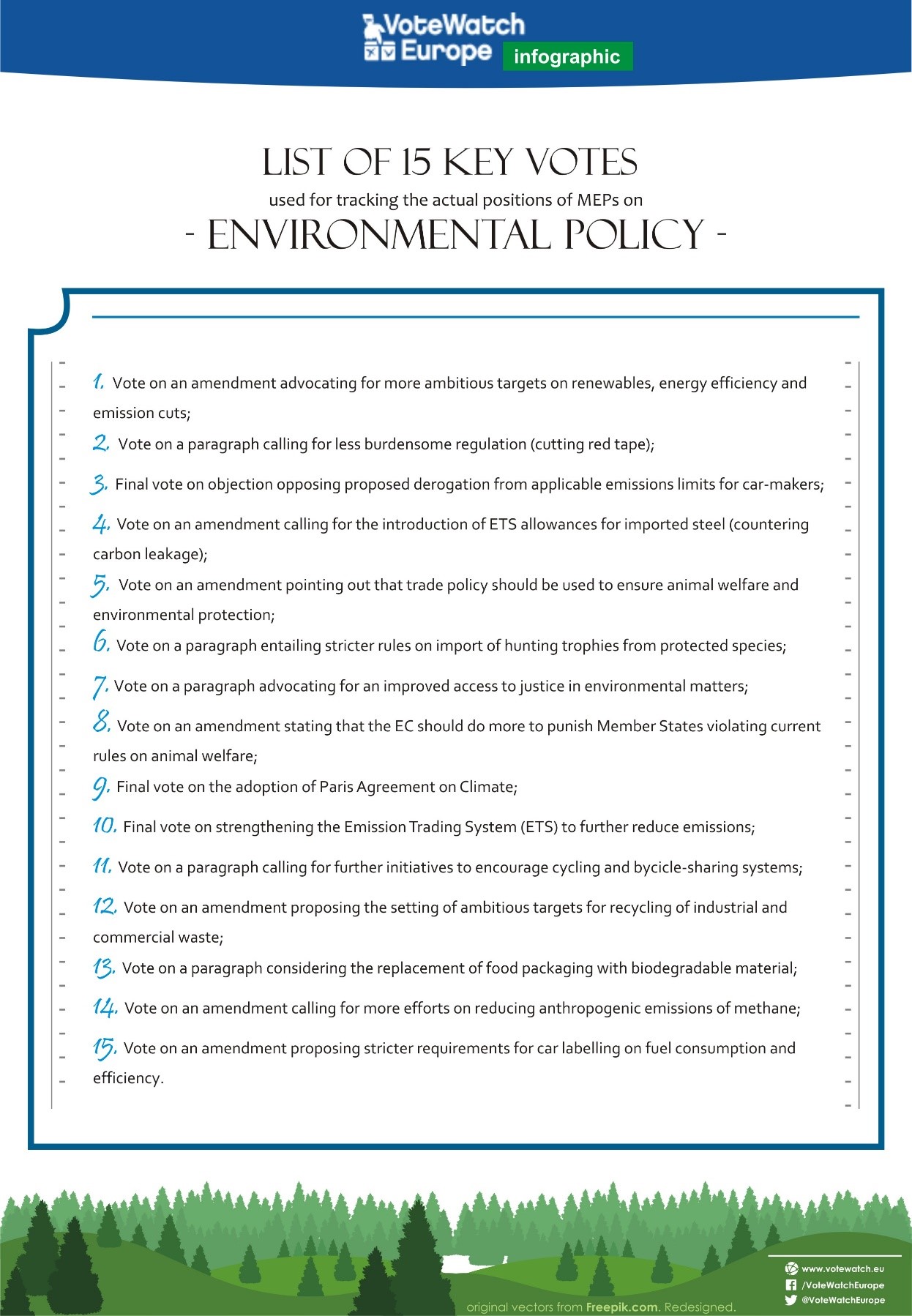