Home Votewatch » The influence of rapporteurs on trade and energy dossiers is overestimated: facts and figures 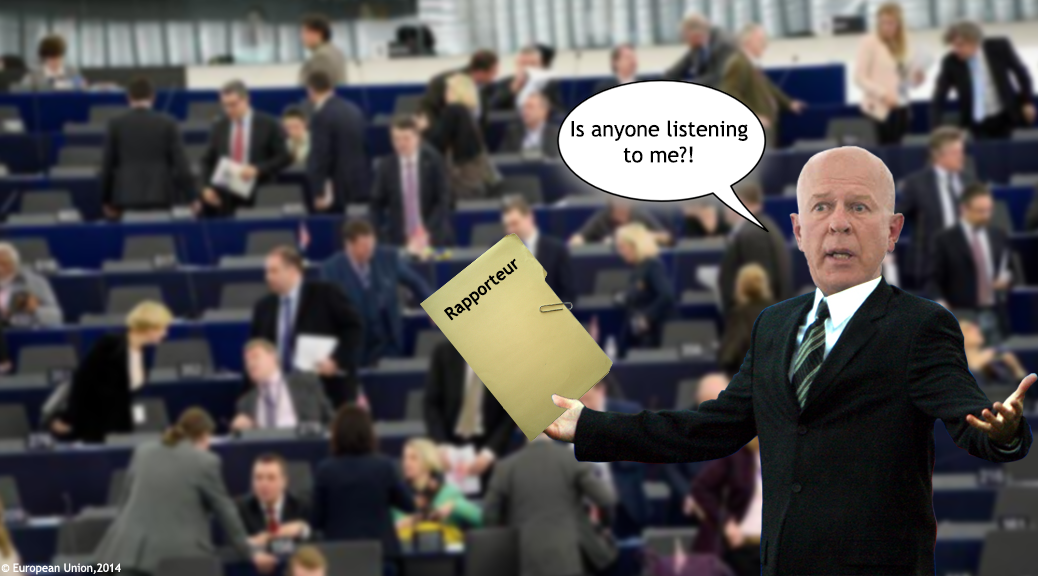 by Doru Frantescu, Director and Co-founder of VoteWatch Europe

Facts & figures: how influent are the rapporteurs in shaping EU dossiers?

In early June, two key documents that the European Parliament was supposed to deal with were effectively ditched: the TTIP and the EU’s energy security strategy. This signals two states of facts: firstly, that the ‘grand coalition’ is a highly over-simplified way of looking at the politics in the European Parliament, a reflex generated by the natural tendency to frame EP politics in the governing coalition vs. opposition coordinates that one is used with at the national level. However, in terms of majority-building dynamics, the EP is a completely different political arena.

Secondly, that the rapporteurs cannot exert substantial influence in the areas where there are big political divisions. The belief that it is the rapporteur that makes and breaks a dossier has been wide spread in Brussels over the years, in the absence of anything that would oppose it. However, this may have been overstated. This analysis shows that the actual rate of success of the rapporteur in the EP plenary is smaller than one would think on divisive issues such as international trade (INTA) and industry, research and energy (ITRE) dossiers.

Indeed, most of the legislative work is done in the EP committees and the rapporteur is instrumental in this process. However, given the EU-level political system, in which there is no clear and stable governing majority, not anything that comes out of the committee can be considered ‘safe’ to make it through the plenary. The further fragmentation of the political power in the European Parliament after the 2014 elections (i.e. the diminishing of the main groups and the reinforcement of the smaller ones) makes it more difficult to foresee how the plenary as a whole will react to proposals which have passed the committee stage.

The increased unpredictability is generated by the fact that the majority in the committee may not match the one in the plenary. Even though mathematically-wise this may be the case (i.e. the groups are represented more or less proportional at both levels), the MEPs from the same group, but coming from a different country sometimes have a different view. Moreover, the committee background may also influence the voting behavior. For example, EPP MEPs that are members of the ITRE committee may have a less progressive view on higher environmental targets than their group colleagues from the ENVI committee.

The failure to adopt an EP official position on the EU’s energy strategy is a case in point. The report that had been adopted in the committee was under attack from all sides in the plenary and the big groups were unable to find agreement not even within themselves, let alone that the so-called ‘grand coalition’ did not exist. Similarly, the postponement of the plenary vote on TTIP was the result of the inability to find consensus not only among the groups, but even more so within the groups, contrary to what had been agreed in the committee. In the past, there have been other occasions when the rapporterus were so badly ‘beaten’ in the plenary that they preferred their name to be deleted from the report.

In the previous EP term (2009-2014) this was particularly the case of center-left rapporteurs on economic issues, and center-right ones on environment / energy-related dossiers, i.e. those matters in which the majority is usually on ‘the other side’ of the political spectrum. All of these cases suggest that on big political issues, each national delegation is more aware of its own stakes and interests and does not allow the rapporteur (or the shadow rapporteur or coordinator) to call the shots.

A look at the data is very telling: at the key votes in the plenary (those by roll-call), the rapporteurs have not been on the winning side more often than the ‘regular’ MEPs. On average, the rapporteur has won 83% of the separate plenary votes cast on their own dossier. However, a closer look by committee shows that there are specific areas where the rapporteur finds it more difficult to pass his/her views, these being international trade (INTA, 71% rapporteur on the winning side), industry, research and energy (ITRE, 71%), and development (DEVE, 77%)[1].

Interestingly, ALDE rapporteurs are doing better at winning votes in the plenary on their own dossiers than the rapporteurs coming from EPP or S&D. This is possible due to the high coalition potential that ALDE has, i.e. the flexibility that this group has in making coalitions to its left or to its right (and the fact that none of the big groups holds a majority on its own). 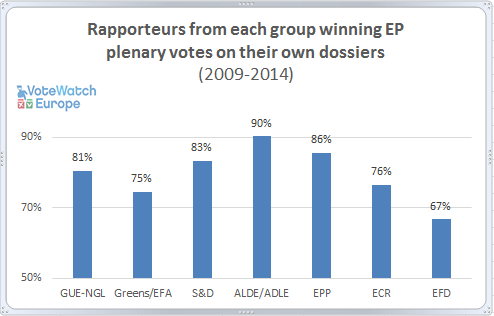 Read related analysis ALDE back in its kingmaker place.

Many of the requests for roll-call votes are on amendments drafted by the small groups at the fringes, therefore it is more likely that the rapporteur wins these votes easily simply because the big centrist groups oppose them. But what happens when the amendments are drafted by one of the two largest groups, the EPP or the S&D? When the votes are on amendments drafted by the EPP or S&D, the average rate of success of the rapporteur drops to 72%. This score descents even below 50% on INTA (42%) and ITRE dossiers (42%), on highly political matters that devise the center-right and the center-left. Other areas where the rapporteurs find it difficult to win this kind of votes in plenary are employment (54%), fisheries (57%), transport (70%), and environment (78%). 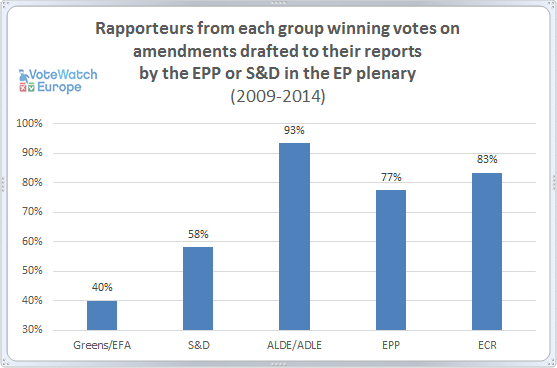 There have been cases of preeminent rapporteurs from the biggest groups who were defeated by the plenary vote on quite a few amendments. Spanish socialist Ayala Sender, for example, has been defeated in 19 out of 20 (roll call) votes on amendments drafted to his dossiers[2] by the political groups at plenary stage. Italian People’s Party Rivellini has found himself in a similar position, winning only 2 out of 28 separate roll call votes on his dossiers[3] in the plenary. Elisa Ferreira[4] (S&D, Portugal) and Elmar Brok[5] (EPP, Germany and the current head of the foreign affairs committee) have won only just over half, 52%, of the separate plenary votes on their own dossiers).

This data is from the 2009-2014 term, as there have not yet been enough votes for a representative sample to be analysed in the current term. However, the elections in 2014 have fragmented even further the power in the EP, and therefore majorities are now harder to ‘guess’ and to build, without a comprehensive ex-ante analysis of the positions of the key (but also the other) national delegations. These other delegations may not necessarily have the rapporteurship, shadow or the coordinator position, but if they have the right numbers they may effectively undermine the report from the inside or outside of the political group, if they are not happy with it.

[5] Mr Brok drafted reports mainly on policy areas such as foreign and security policy (AFET) and on constitutional affairs (AFCO).