Home Votewatch » Study: who will replace Pittella as the leader of the S&D group? 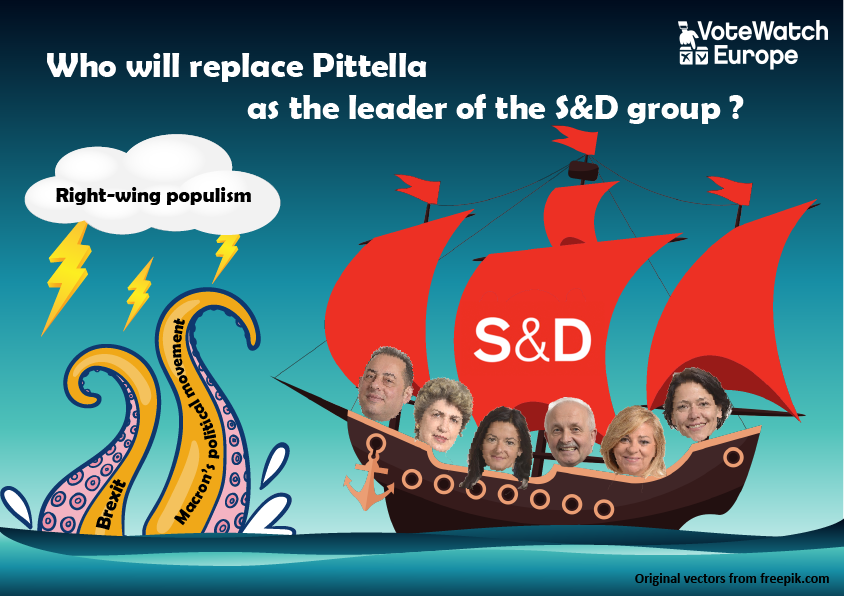 The departure of Pittella provides the S&D group with a great opportunity to kick start the preparations for the 2019 European elections. The question is, who will succeed him? This report looks into where the likely candidates to S&D leadership stand at this time and how their policy preferences match those of their fellow Social Democrats from the other delegations within the group.

The Social Democratic parties are hoping for a comeback after the heavy electoral defeats in the Netherlands, France and Germany over the past year. The combined effects of Brexit, which will take 20 members of the British Labour Party out from the group, and the rise of French President Macron’s political movement put the S&D group in a very precarious position: in the worst case scenario, the group risks even losing its position as second largest group in the European Parliament.

The center-left group will certainly need a strong parliamentary leader and an effective electoral campaign to maintain its influence in the European Parliament. Although the future chairman will not necessarily become the Spitzenkandidat for the S&D group in the upcoming elections, the new chair will be expected to build momentum in the run-up to the European elections and revitalize the beleaguered Social Democrats.

While none of the potential runners have confirmed their candidacy so far, saying it is too early to discuss the issue, VoteWatch Europe conducted a research into the views of the potential candidates to succeed Pittella, given the huge influence the S&D group possesses on EU law-making.

To find out who is the best positioned to become the next S&D group chair, we compared the policy views of the 5 potential candidates with those of all the other S&D group members using political data collected from over 4000 votes on all issues dealt with in the EP.

Our research shows that, other unquantifiable factors aside (such as the outcome of backdoor negotiations), at this point in time Portuguese Maria  João Rodrigues would be the best positioned to get support for her candidature, as her political views are particularly close to those of most S&D colleagues.

We also analysed the impact of the race on the overall direction of the Social Democrat family, which is currently torn between the temptations to join grand-coalitions with the other moderate forces and desire to boost its progressive credentials. We found that the upcoming race is unlikely to lead to a breakthrough, meaning that the S&D dilemma is here to stay.

Read our full report below to find out how we reached these conclusions and the potential impact of this political race on the future direction of S&D.

Disclaimer: there are not formal candidatures yet and the politicians included in our list were selected on the basis of insights from the EP and media sources. This means that changes are still possible and that this analysis will be updated in case new candidatures arise.

For comments or additional information, do not hesitate to contact us at [email protected]

Portuguese Rodrigues is well positioned to win the race

Since they are part of the same political family, which is in general rather cohesive when voting on European issues, the differences between candidates are not frequent. However, there are some key issues where the views of the S&D candidates differ and these apparently small differences can be decisive when the S&D Members will decide who to vote for.

In order to check to what extent the views of the candidates align with those of the other members of the S&D group, we looked into their actual votes in the European Parliament and calculated how frequently each S&D Member voted in the same way as each of the potential candidates.  For instance, if a member of S&D voted most often in the same way as Valenciano, we would expect the Spanish candidate to have a slight advantage in convincing this member to support her, all other things being equal.

Please note that our simulation only shows the starting positions from which the backroom negotiations are being conducted, and the likely outcomes if these negotiations fail, thus allowing the race to be played all the way. Other factors will influence the final result, such as the considerations regarding the equilibrium of power of certain national delegations within the group. PR considerations are also likely to be considered given that the next European elections are close. Therefore, nationality and other political considerations will also play a role in determining the winner of this race.

According to our simulation, Portuguese Maria João Rodrigues would be the preferred candidate for most national delegations in based similarity of policy preferences, including some of the largest and most influential national delegations in the S&D group such as the Italians, the British and the Romanians. For as many as 129 S&D members, the Portuguese candidate would be their best match in terms of policy preferences. Furthermore, while most German members are likely to rally behind their national MEP Udo Bullmann, the interim leader of the S&D group, we have also found that 10 German Social Democrats have actually voted more frequently in the same way as Rodrigues than as Bullmann.

Apart from his fellow German colleagues, Udo Bullmann is likely to receive support from his Austrian and Swedish colleagues, which tend to be more more left-leaning than the other S&D members, as shown by our previous special X-ray report on the Social Democratic group. Boosted by the support of the leftist branch of S&D, Bullmann starts off as be the main challenger of Rodrigues.

When looking at their policy preferences, we noticed that both Spanish MEP Elena Valenciano and Belgian MEP Kathleen Van Brempt would start with only the backing of their respective national delegations, as the policy views of other S&D members are closer to those of other candidates. Nevertheless, these two candidates still have a chance to win (as pointed out above, this simulation only shows the starting positions), although they will have to make a bigger effort when trying to draw support from their fellow S&D colleagues.

Finally, although Slovenian MEP Tanja Fajon is the only representative of her country in the S&D group, she appears to be the second best option to replace Pittella among 77 S&D members, in particular among CEE MEPs. If elected, Fajon would become the first S&D group leader from a former communist country.

This race could also affect the direction of the Social Democratic group as a whole. As pointed out in our previous in-depth study on the current political dynamics within the group, the Socialists and Democrats are currently set between a rock and a hard place. On the one hand, the S&D group has been trying to distance itself from the EPP by announcing the end of the grand-coalition and slowly diverging from the positions adopted by the other centrist groups  (in a unprecedented move, the group abstained when voting on the EU budget for the current year). On the other hand, given the shrinking political center across the continent, now more than ever, the European Commission needs the full support of the S&D family, in order for the European project to keep working.

Such a tension is also reflected at the national level, as shows by the recent developments in Germany and Czechia, where the local Social Democratic parties have faced an increasing pressure to join a grand-coalition with right-leaning forces, although such a move runs against their wish to find some relief by joining the opposition ranks.

In the European Parliament, Pittella’s bid to shift the group to left faces several obstacles, such as the internal scepticism towards the viability of a progressive alliance with the other left-wing forces. The largest national delegations within the group have in fact voted more frequently in the same way as the centrist ALDE than the left-wing Greens/EFA group.

Pittella himself has agreed more often with the views of ALDE rather than those of the Greens/EFA group. So how could the race to succeed the current leader of the group impact on the overall direction of the group?

Our data shows that Portuguese Rodrigues would be a continuity leader in this respect, as she is the closest to the political centre among the potential candidates. In fact, she has agreed with ALDE 81% of the time, while she voted in the same way as the Greens 72% of the time. Fajon shares similar policy preferences, which might explain why our simulation indicates that Fajon would be the second best choice for most S&D members.

The policy views of Valenciano and Van Brempt are also closer to the ones of ALDE than those of the Greens/EFA, while Bullmann has managed to maintain an equidistant position between the political left and the political center. This also explains why our simulation expects Bullmann to be able to draw the support from the most leftist members within S&D.

Still, the direction of the group is likely to remain ambiguous even after the upcoming race, regardless of the outcome. In fact, despite being the closest to the left among the potential candidates, Udo Bullmann’s leftist credentials are blurred by his national party’s decision to join another coalition led by Angela Merkel and his previous involvement in the negotiations of a grand-coalition arrangement in Germany, while the closest candidate to the political centre, Maria João Rodrigues, can still be associated to the progressive alliance currently governing Portugal (where the governing Socialist Party is supported by the Portuguese Communists and  the Left Bloc, both members of GUE-NGL in the EP).

In such a difficult period for the European left, only time will tell whether the new leader of the group will manage to pursue the right strategy when facing the dilemma between the inclination to team up with the other moderate forces and the desire to luster the progressive credentials of the group.

At VoteWatch Europe we can help you forecast the future developments by looking at the political dynamics  and trends behind the EU decisions. For more information, feel free to contact us at [email protected]