To feed the interest in the race as a whole and the debate that will take place on Wednesday, we have made an in-depth simulation to find out who is the preferred candidate of each MEP. The way we did is by comparing the views of each of the electors (MEPs) with those of the candidates on all matters scrutinised in the European Parliament in the current term (ie. votes on over 4700 policy issues). Using a similar methodology we have successfully predicted in December that Tajani was the most consensual candidate within the EPP group.

The forecasts of the race in the EP indicate that, as it stands, Tajani has a slight advantage over Pittella. The simulation also shows that, in theory,  even Verhofstadt could overtake Tajani in the final round, if he managed to get to the run-off (as a result of a possible deal with the S&D). However, after the fiasco of the ALDE-5 Star marriage attempt, that possibility has now become very remote.

This analysis shows the base line of support for each of the candidates, explores scenarios and highlights who the swing voters, or kingmakers, are.

The candidates of the two largest groups in the European Parliament, Gianni Pittella (S&D) and Antonio Tajani (EPP), are certainly the favorites to access the final run-off. However, if one of these two withdraws, then Guy Verhofstadt (ALDE) will make it into the final round and still holds a theoretical chance of winning the (much sought after) EP Presidency.

As things stand, Tajani and Pittella would be backed by most of the MEPs from their own groups and this would allow them to trump the candidates of the smaller groups. The fact that every political group put forward a candidate for replacing Schulz at the helm of the Parliament is fragmenting the opposition to the leading candidates, thus making it easier for these two to reach the run-off.

The infographic below shows the maximum number of votes that each candidate can be expected to obtain in the first round, if none of the candidates withdraws by then and if all MEPs were present and voting (the absentees are likely to be roughly evenly distributed, hence not changing the proportions). 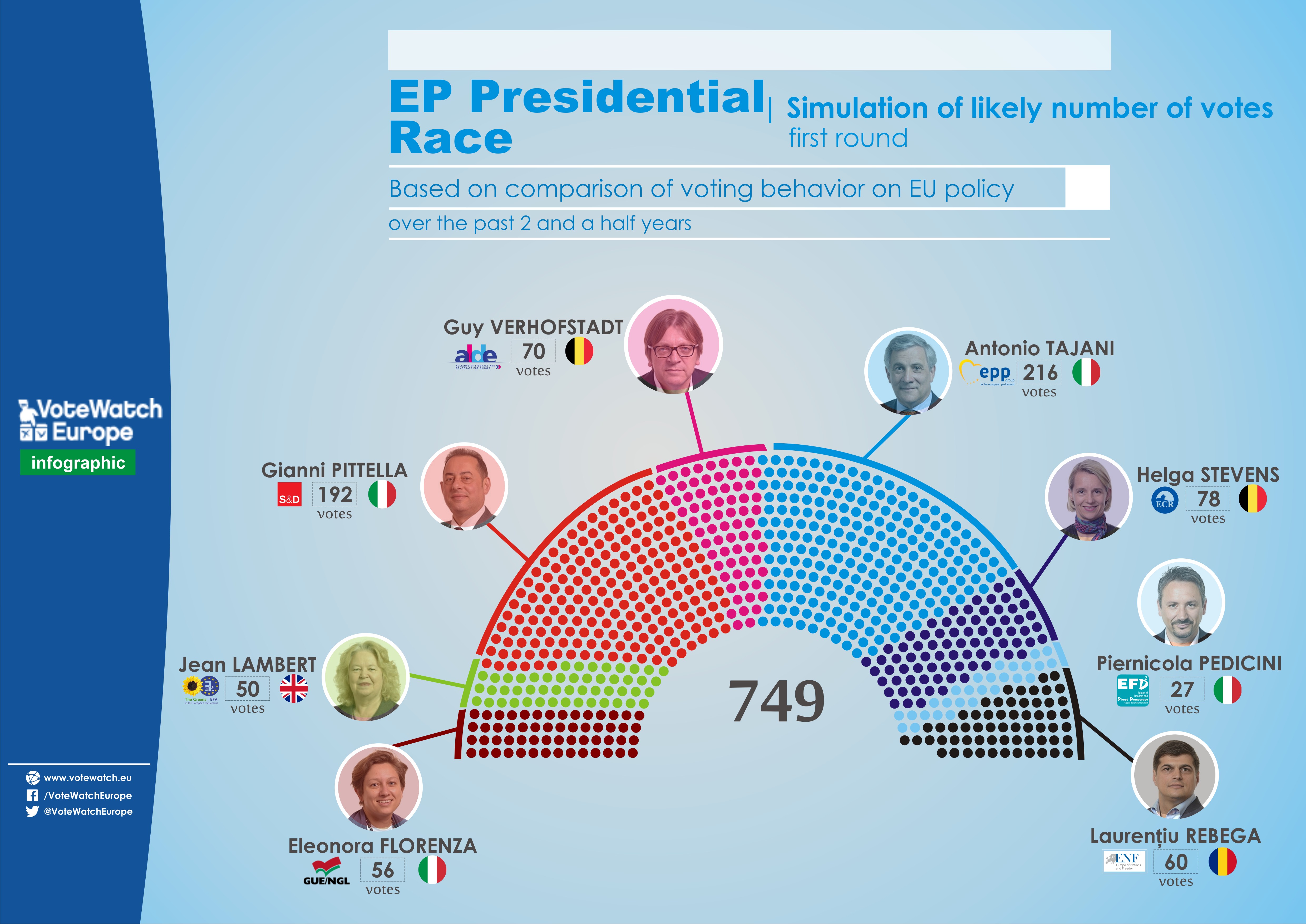 Interestingly, after the first round, the candidate of ECR, Stevens, would be in 3rd position, benefiting also from some small external support (in addition to the backing of her group) from non-ECR MEPs whose views turned out to be very close to those of Stevens.

Which candidate would win the run-off? 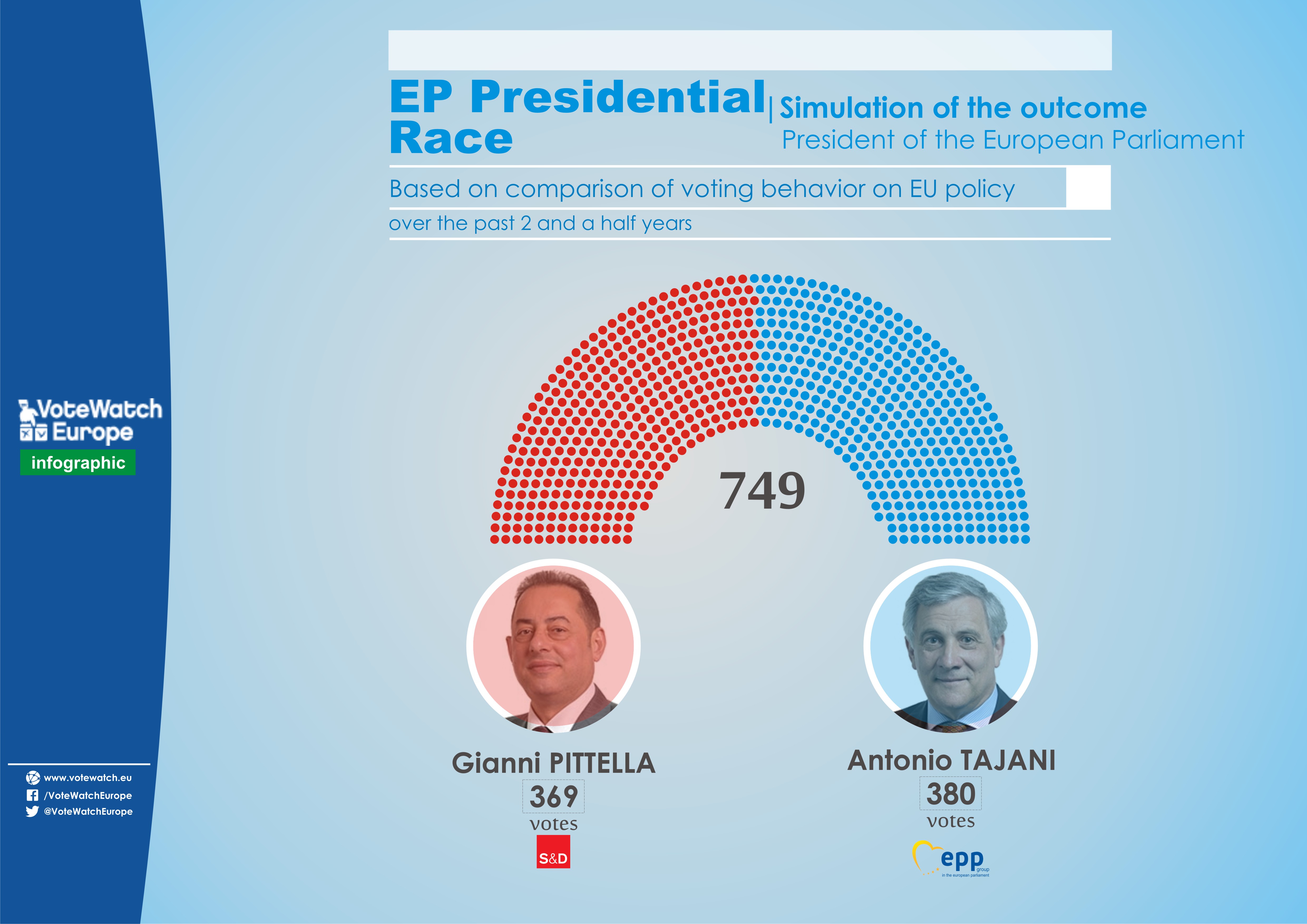 The run-off is set to be very tight. According to our data, Tajani would win the election if every MEP were to participate and would vote according to the political positions expressed in the EP over the last 2 years and a half. Tajani is slightly ahead of Pittella, leading his fellow Italian rival by only 11 votes. The breakdown of the vote provides us with more information about where the support for the two candidates comes from. Pittella would gather the full support of the left-wing parties (GUE-NGL, the Greens and S&D), as well as approximately two thirds of the ALDE’s members. Unfortunately for Pittella, this would not be enough to secure him the victory. Tajani would still win the elections thanks to the support of the majority of Eurosceptic MEPs in the Parliament (EFDD and ENF) as well as some Nordic and Germanic members of ALDE. Interestingly, this scenario even assigns to Pittella the support of the members of the 5 Star Movement, although this is far from granted considering the difficult relations between his Democratic Party and the movement founded by Beppe Grillo. The 17 members of the 5 Star are not fond of either candidates and their voting choice is still pending. However, if 5 Star does not support Pittella, the candidate backed by S&D will find it very difficult to bridge the gap.

Should Pittella give up any hope to become the next President then? Looking at the potential swing voters can provide some comfort to the S&D candidate. 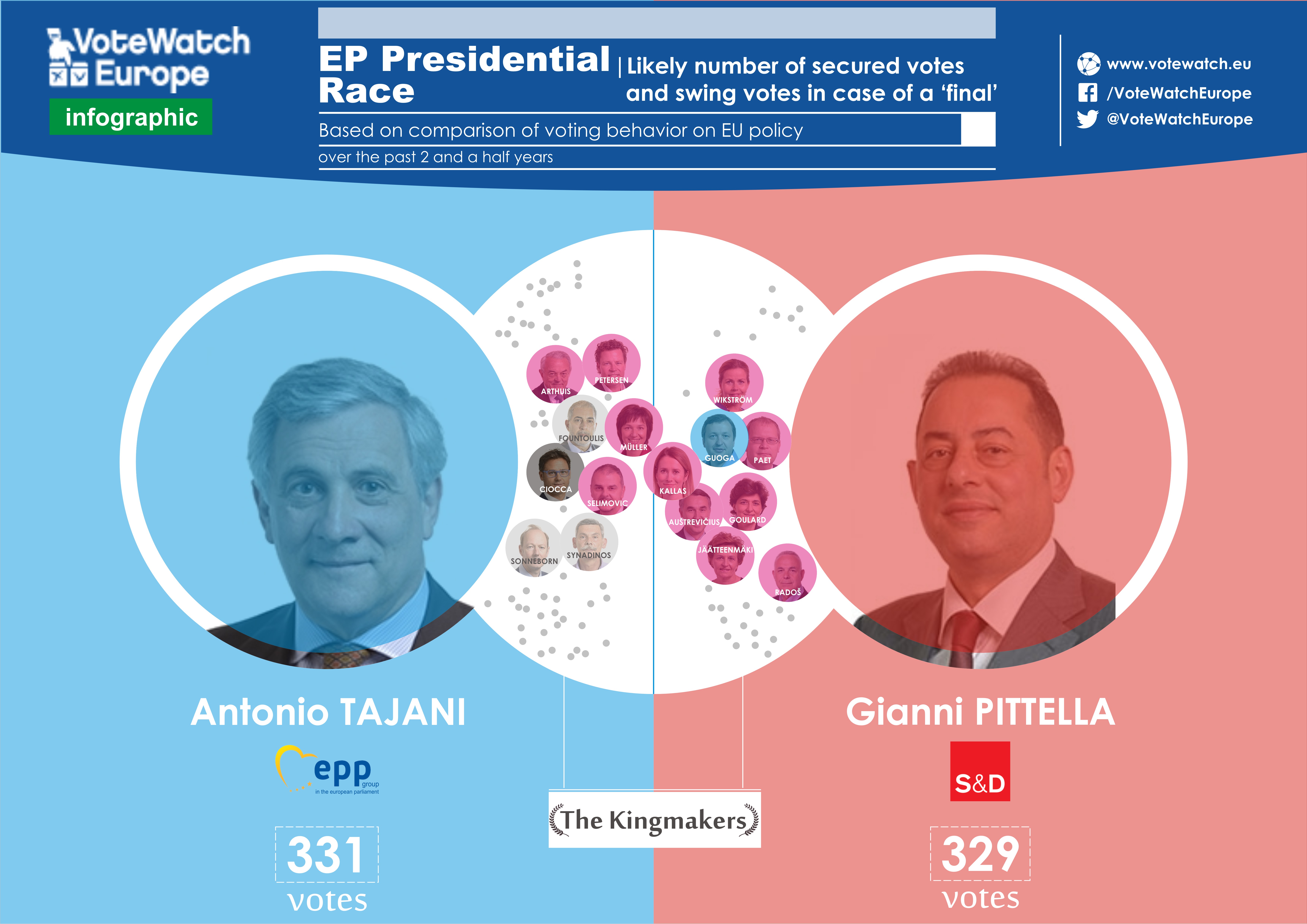 (if you can’t see the names of the swing voters, save the picture on your computer and then reopen it)

The swing voters (or kingmakers) are mostly coming from ALDE and the fringe groups. We considered “swing voters” those MEPs whose views match in almost equal proportions those of Tajani and Pittella (more precisely, the difference between their voting matching rates with Tajani and Pittella, respectively, is smaller than 5%).

According to our simulation, out of 89 swing voters 49 are slightly closer to Tajani. However, these are uncertain votes: what would happen if the nationalistic ENF group decides not to participate in the final vote or if many ALDE Members abstain? By excluding the 89 “swing voters”, the two candidates would be almost tied, with only two votes of difference between them. Importantly, Pittella’s potential electors are more convinced about their choice than some of Tajani’s potential electors, which means that if fringe groups do not take part in the vote, then Pittella gets the upper hand.

Does Verhofstadt stand any chance at all?

The liberal ALDE MEPs must know by now that, in the absence of an EPP-S&D agreement, they’re in a very good position to pick the winner (if they were to vote as one). As a result, they could try to push their luck and force an agreement with one of the bigger groups that would see Guy Verhofstadt in the final. Until Monday, this scenario was not totally unrealistic, but after the ALDE-5 Star marriage fiasco Verhofstadt is unlikely to get the backing of his colleagues for such as move.  As such, ALDE will now probably focus on getting something else in return for their support to the winner (in case the EPP and S&D do not reach their own agreement).

All in all, as EP insiders know, a lot of maneuvering is going on these days in the Parliament and agreements can be reached any time between now and the final round of the elections, which will alter the results. Our simulation only shows the starting positions from which the backroom negotiations are being conducted, and the likely outcomes if these negotiations fail, thus allowing the race to be played all the way. This showdown would be welcomed by some stakeholders who argue that EU politics needs more electoral competition and less secretive deals. To see what will actually happen, we still need to wait for a week.

Here are a couple of curiosities that we found while comparing the voting records:

There are two MEPs in the EPP group whose voting records indicate that they are actually closer to the S&D than to EPP.

There is a member of the Bureau of the pro-free market ECR group whose policy views are closer to the communist GUE-NGL than to those of its own group.

VoteWatch Europe is the think tank most followed by European Parliamentarians.