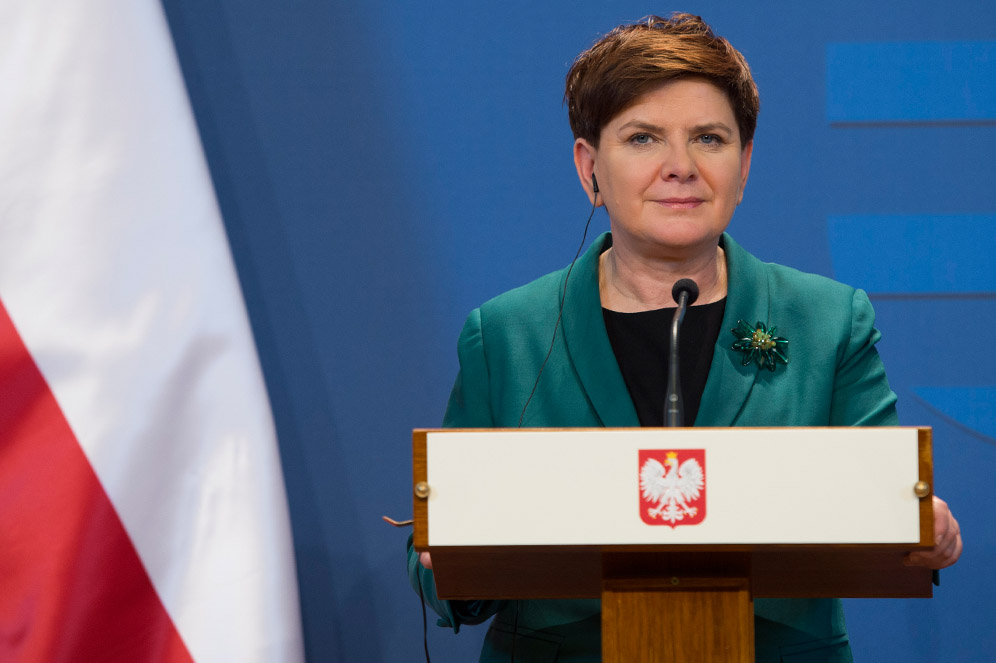 Right when the European unity is more vocally proclaimed around its 60th celebration, it was challenged once more during the latest European Council in Brussels, when Donald Tusk was re-elected as Council’s President. Polish Prime Minister, Beata Szydlo, voted against his compatriot’s appointment and was outvoted 27-1 by the other Member States.

The Polish government has been increasingly drifting away from the core of the EU during the past couple of years and this event will likely accelerate this trend. In this report, we look at the voting behaviour of Polish representatives into the broader EU decision-making picture (Council and European Parliament), which highlights increasing divergence even with traditional allies, such as Hungary’s FIDESZ.

While the bigger states (France, Germany, Italy and Spain) believe that the future of the EU lies in the multi-speed architecture, coalition formation will be more and more important in the Council in order to get things done. Given the increasing use of qualified majority voting in this intergovernmental body, the countries’ weights are getting increasingly important, whether when it comes to support a bill or block it.

Even though the four Visegrád countries call for unity within the European Union, criticizing the stratified approach proposed by the founding countries, the V4 representatives seem to be divided among themselves when voting in the Council, as well as in the European Parliament.

In these bodies, ideology matters, since governments from minority political families are more likely to be on the losing side when voting. Governments that are in minority must therefore form coalitions if they want to influence the outcome. However, our data shows that the Polish Conservatives are not as close to the other Visegrád countries as one might expect. This seems to be making it more difficult for Warsaw to rally allies in the day-to-day decision-making, and could thus reinforce its reclusive position in the EU.

The governments’ political families and orientations matter in the Council

In the Council, the political family of governments is of importance, since the ones lefts in minority tend to be those from fringe political groups. This was showcased during the re-election of EPP’s Donald Tusk.

Indeed, the governing party in Poland, Law and Justice (PiS), sits in a minority group, the European Conservatives and Reformists (ECR), which has only two representatives in the Council (Poland and the UK). Even so, the two countries are not very close to each other: the stats measuring the coalition rate between Poland and the UK in the Council suggest that there is more distance between London and Warsaw than one might think at first sight.

In this case, British Prime Minister Theresa May did not oppose the re-election of Tusk. However, her predecessor, David Cameron, who created the Eurosceptic ECR group in the European Parliament, voted against the election of the European Commission president Jean-Claude Juncker in 2009. Like Poland today, he was outvoted by a majority of member states.

Dissident governments are on the losing side when opposing

With the increasing use of the qualified majority voting within the Council, minority political families no longer have a veto power, with the exception of a few areas. Governments cannot put pressure on their counterparts in the same way as in the past, unless they manage to muster a coalition.

The United Kingdom has often been on the losing side in the Council, especially on budgetary, economic, agricultural and justice issues. This has been increasing over the past few years: previous Labour governments have been outvoted much less than the two Cameron cabinets, which makes the point that political family and orientation does play a role and helped forecasting the distancing of the UK from its continental partners.

It comes without saying that the isolation of the British government in the Council increased after the Brexit referendum. The withdrawal of the UK from the EU will automatically change the balance of power in the Council of ministers, and could strengthen France and Italy and weaken Germany, as shown in our previous special report.

Using a similar methodology as for the UK, we are observing that the Szydło’s government is outvoted more frequently than the previous Polish governments. This trend could increase in the following months, given that leading Polish politicians have expressed their intention of applying a “negative policy” towards the EU in retaliation for the re-election of Donald Tusk. 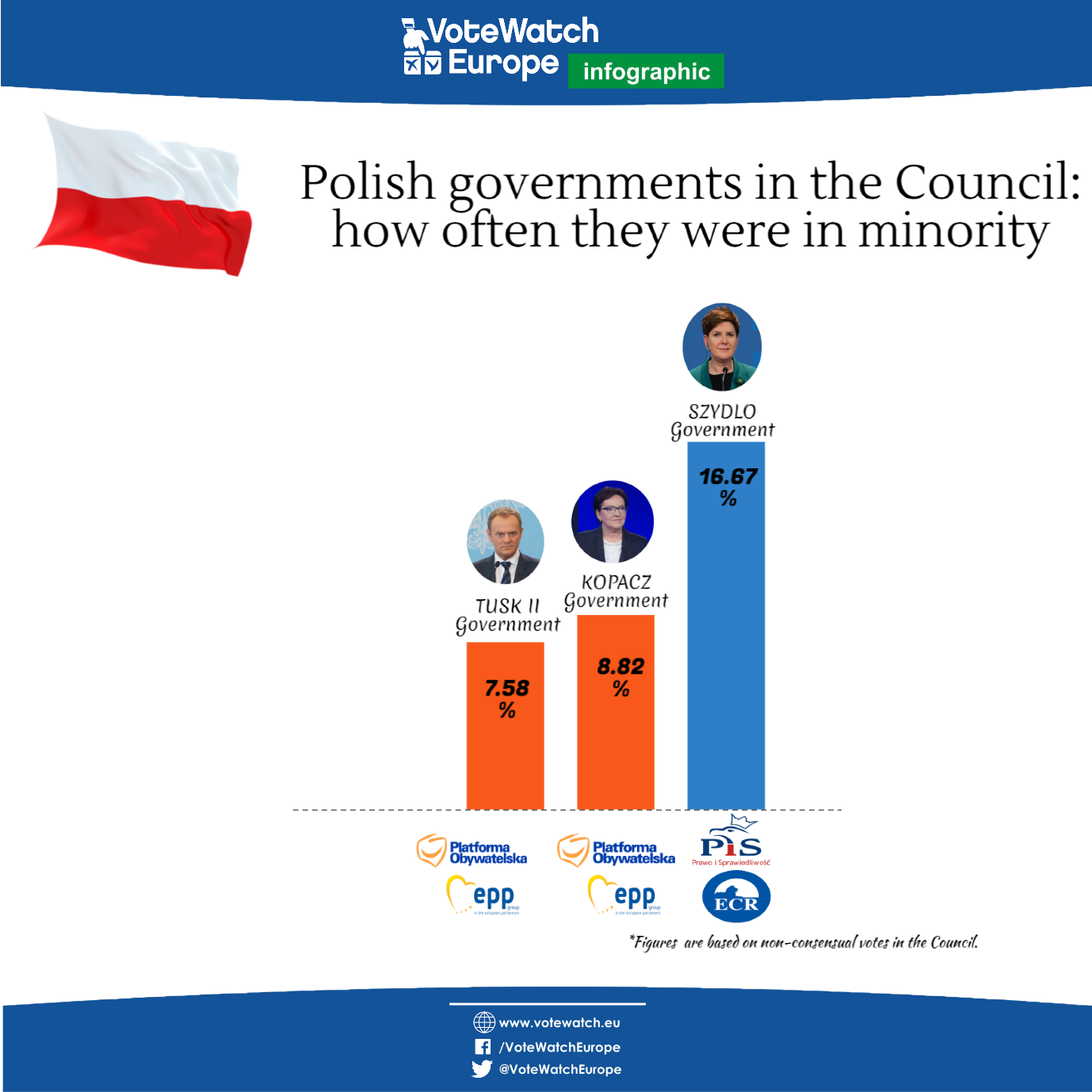 Poland finds it difficult to form coalitions with other Visegrád countries

Surprisingly, the other three Visegrád members have not supported Poland’s position during the re-election of Donald Tusk.

A look at the big picture shows that this is not an isolated event. Contrary to the common view, voting patterns in the Council do not support the idea that there is a homogenous coalition amongst the Visegrád countries. Although the group shares common views on migration issues, its cohesion is overestimated, as they disagree on other important topics.

The Visegrád group should not be regarded as a united front as long as the political colours of the four governments is far from being the same. The Czech Republic and Slovakia, both governed by a Social-Democratic party (Sobotka’s Czech Social Democratic Party and Fico’s Direction – Social Democracy) are closer to each other than to Hungary and Poland. Even Poland and Hungary are not particularly close to each other when voting in the Council of the EU. What may look as a surprise to some, Orbán’s government has found it easier to ally with the previous Polish governments than with the current one, as shown by their voting records matching rates in the infographic below. 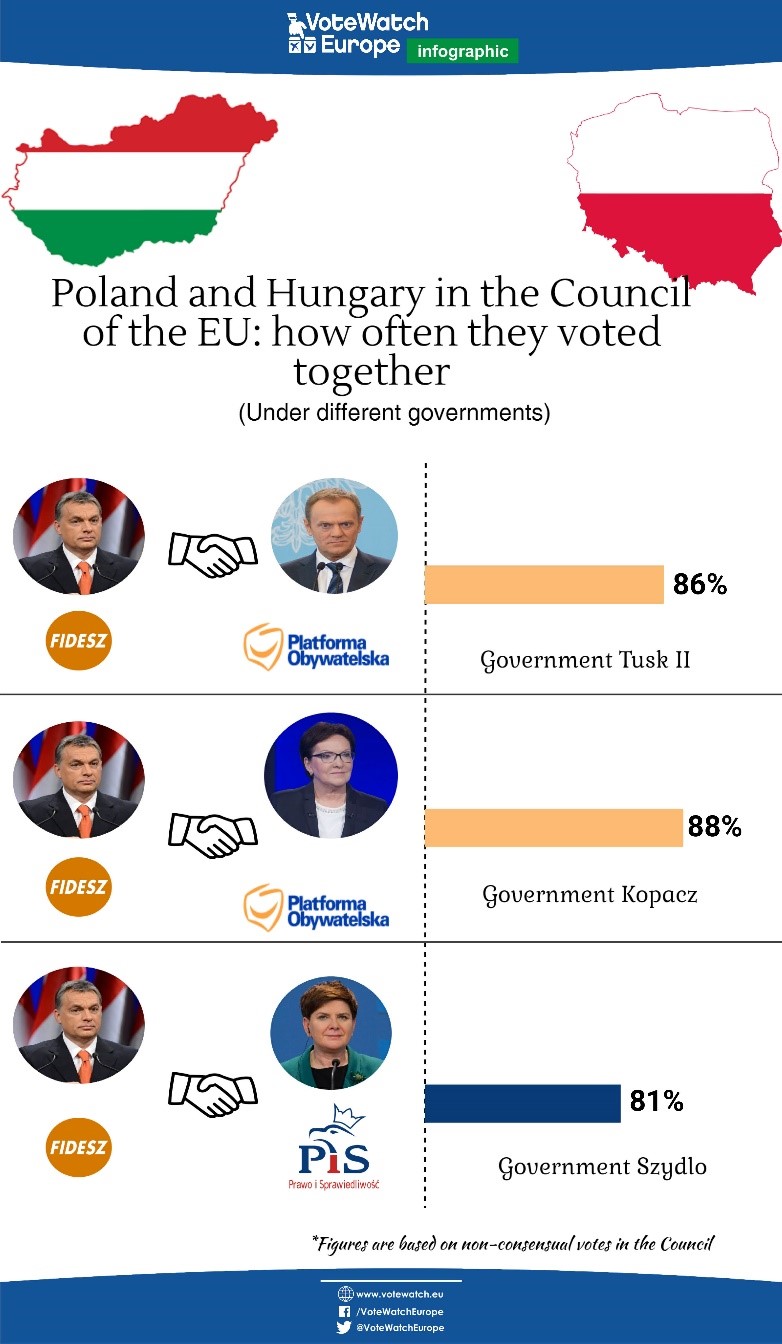 This closer proximity between FIDESZ and Tusk’s Civic Platform (as opposed to the Law and Justice Party, currently in power in Warsaw) is confirmed by the coalition formation patterns in the European Parliament. As such, the recent point of contention regarding the re-election of Tusk underlines the more complex relationship between the two countries. This could affect in the long run the capability of these member states to build a common front against the two-speed Europe endorsed by France and Germany. 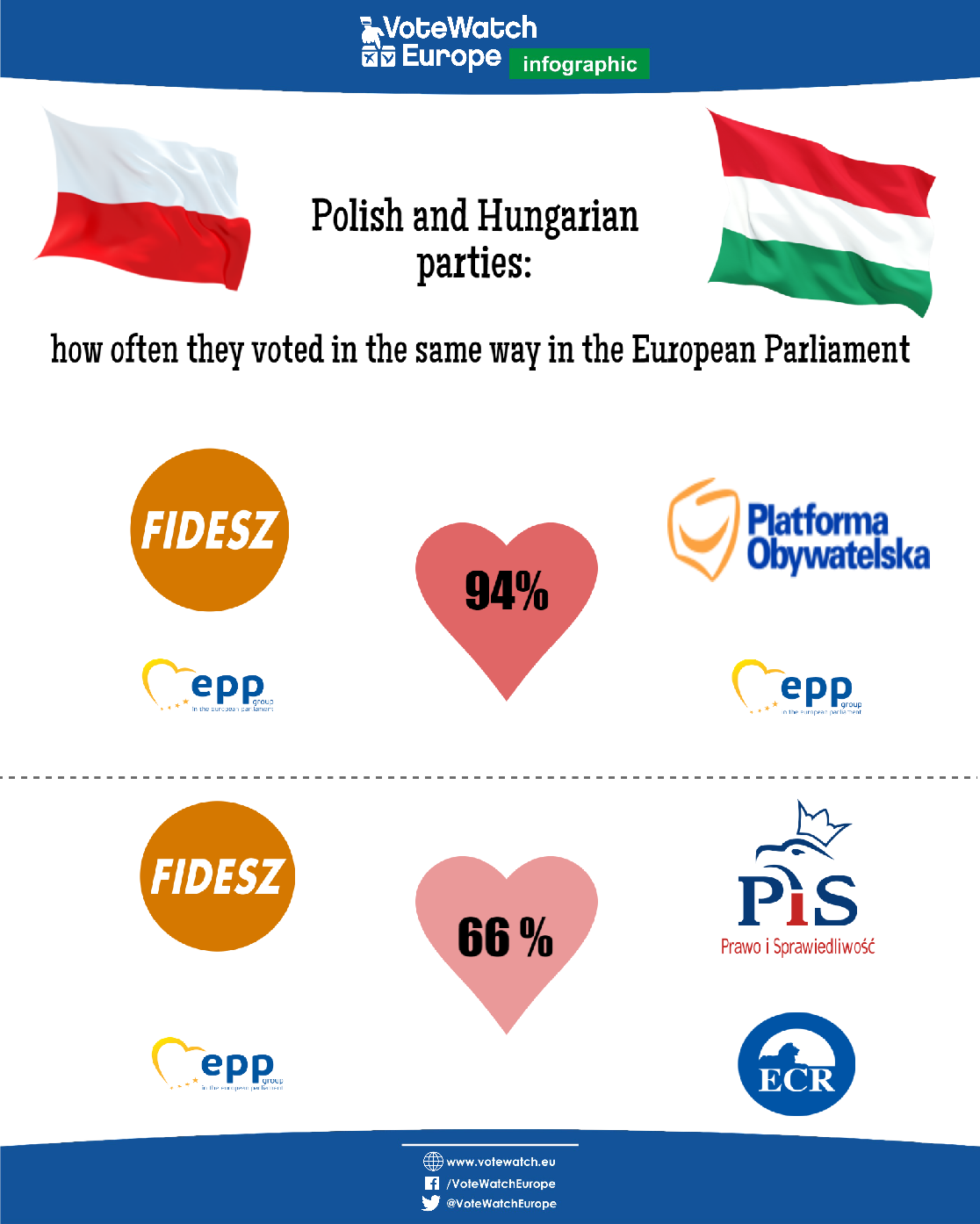