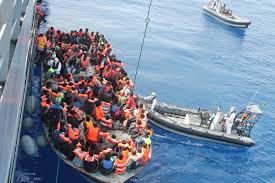 On Tuesday 12th April, a majority of the Members of the European Parliament (MEPs) approved a non-binding resolution on a holistic approach to migration in the EU.

The text, drafted by Kashetu Kyenge (S&D) and Roberta Metsola (EPP), was adopted by 459 votes in favour, 206 against and 52 abstentions. The two larger groups, the Christian-Democrats and the Socialists, as well as a majority of the Greens and ALDE members, voted in favour of the report. All the MEPS from the Eurosceptic group ENF voted against the text, whereas EFDD group also opposed the resolution but the group was rather divided with 15 deputies rebelling for 22 being loyal. The radical left was also split but the majority followed the group’s political line and abstained. Indeed, although 84% of MEPs voted along European political group line, it should be noted that a majority of parliamentarians from Czech Republic, Hungary, Slovakia, and the UK opposed the resolution regardless of their political views.

MEPs opposed at a large majority (561 against, 75 for, 71 abstentions) an amendment (AM 2) on behalf of Eurosceptic which said that the open-border policy of the European Union incentives and encourages more migrants to attempt to cross the Mediterranean Sea.

Thus, the report advocated for a centralised asylum system, with an integrated border management, to better deal with flows of migrants and asylum seeker in the EU. The text denounces the failure of the current system and calls for a reform of Dublin III regulation. MEPs underline that the particular migratory pressures faced by Member States at EU external borders have not been properly taken into account. The new system should ensure fairness, shared responsibility, solidarity and swift processing of applications, deputies said.  However, deputies rejected by 474 votes against, 164 for and 75 abstentions, an amendment (AM 22) on behalf of the leftist group GUE-NGL urging to not consider Turkey to be a safe country for all the people in need of international protection.

Parliamentarians proposed to establish a central system for collecting and allocating asylum applications, which would include a quota of refugees to be welcomed for each Member States. Migrants and asylum seekers would be distributed from “hotspots”. In addition, mutual recognition of positive asylum decisions should be enforced by all Member States.

The report also asks for the establishment of humanitarian visas, which would allow for travelling directly to the country where the holder wishes to claim asylum. Moreover, in the longer term, MEPs requested a safe and legal way to be found for third country nationals to enter the European Union in order to prevent human trafficking.  A majority of MEPs rejected an amendment (AM 2), drafted by Marine Le Pen’s group, which considered irregular entries and residence as illegal actions which should be punished as crimes.

The resolution claims the EU should adopt a “binding and mandatory legislative approach” regarding resettlement. MEPs insist that Member States must fulfil their duties to relocate refugees. They recalled that only a small part of 106,000 asylum seekers awaiting reassignment from Italy and Greece to other EU countries had actually been relocated.

Regarding returns, the resolution advocates for establishing new agreements taking precedence over bilateral ones between Member States and third countries. MEPs have also underlined that returns should be allowed only if the country to which migrants are being returned is safe.

Position of the European political groups

MEP Roberta Metsola, co-author of the report and member of the European People’s Party (EPP), stated that there is no quick fix for migration, no magic silver bullet. She said the EU does not need more emergency solutions but rather a sustainable approach for the future.

The Socialist group (S&D) strongly supports the report saying that it outlines a strong progressive vision of what a new migration policy for Europe should look like. MEP Kashetu Kyenge, the other co-author of the report and member of the S&D group, said that migration should not be combated; instead, it should be managed. She insisted that the European approach should be based on solidarity and responsibility sharing.

Moreover, MEP Brigit Sippel, S&D spokesperson, added that, in the longer term, the EU  needs to ensure that there are clear legal routes into Europe – both for those in need of protection and for those that have skills needed in the EU labour market. She urged the EU to establish general rules governing the entry and residence of third country nationals seeking employment in the Union in order to fill the gaps in the EU labour market. She said that this could boost the European economy and show the benefits that migration brings to the EU.

MEP Syed Kamal, Chair of the Conservative group ECR, urged EU leaders to adopt a pragmatic approach to the newly proposed Dublin Agreement, arguing that now it is not the time for an overhaul of the EU’s migration system, rather, it is time to make sure that existing EU laws are properly implemented and that all Member States follow the rules.