Home Votewatch » Large support in the EP for the new EU agency for border control, even from some euro-critic parties 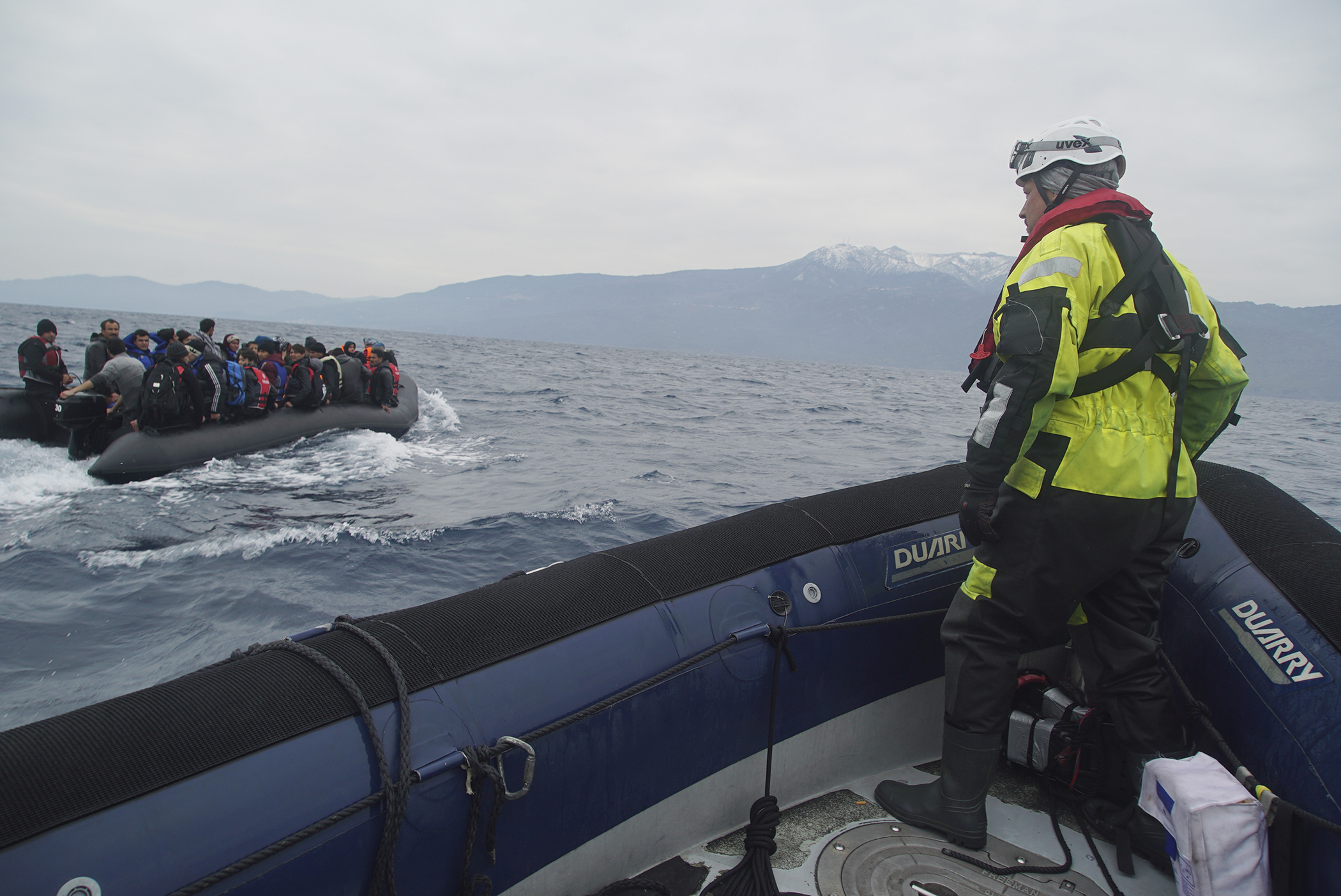 Refugees crossing the Mediterranean sea on a boat, heading from Turkish coast to the northeastern Greek island of Lesbos, 29 January 2016.

Despite the frequent clashes among both the political groups and the different national delegations in the European Parliament on how to respond to the unprecedented migratory flows, a compromise for the establishment of a European Border and Coast Guard has been supported by 68% of the MEPs.

The initiative is a part of the measures adopted to reinforce the security of the EU’s external borders and, in particular, entails that the Council can oblige a reluctant Member States to collaborate with the newly established Agency, in case the functioning of the Schengen area is in danger.

The resolution was a result of a compromise between the centrist political groups, namely the European People’s Party (EPP), Socialist and Democrats (S&D) and the Liberals (ALDE), who all emphasized the importance of safeguarding the Schengen area.

However, despite the different political ideologies, some MEPs from fringe group preferred to vote along national lines rather than ideological ones. In fact, some of parties from the most affected countries agreed on strengthening the security of EU’s external borders.

Additionally, the vote highlighted the differences between the political parties opposing the so-called “open-door” policy towards refugees. In fact, some euro-critic parties are willing to support more integration in migration policy as long as this can contribute to stem the flows of refugees coming into the EU, such as the Hungarian Fidesz (EPP) or the Polish Law and Justice (ECR).

The biggest controversy came from the article 18, which states that the Council, on a basis of a proposal from the Commission, may decide to call on the Agency to deploy the new European Border Coast Guard teams, even against the will of the concerned Member State. This option can be implemented only if a Member State does not take the necessary measures to preserve the functionality of the Schengen Area.

Not surprisingly, no member of the Eurosceptic groups EFDD (Europe of Freedom and Direct Democracy) and ENF (Europe of Nations and Freedom) voted in favor of this resolution, as the groups deemed this piece of legislation to be an infringement of the national sovereignty of Member States. Gilles Lebreton (National Front) argued that, despite the new agency would help the States to monitor their external borders on a voluntary basis, in reality, the Council and the Commission will pressure and force them to let the agency to act in their place.

On the same line, no MEPs of the far left European United Left/Nordic Green Left (GUE/NGL) supported the text, but because of completely different reasons. GUE/NGL criticised the “xenophobic and racist” agenda of EU migration policy, in particular the discrimination and expulsion of refugees. The Spanish MEP Marina Albiol (United Left), stated that “instead of taking the necessary steps to prevent this tragedy, this European Border and Coast Guard is as an instrument to criminalize immigrants, while collecting their fingerprints and other personal data”. 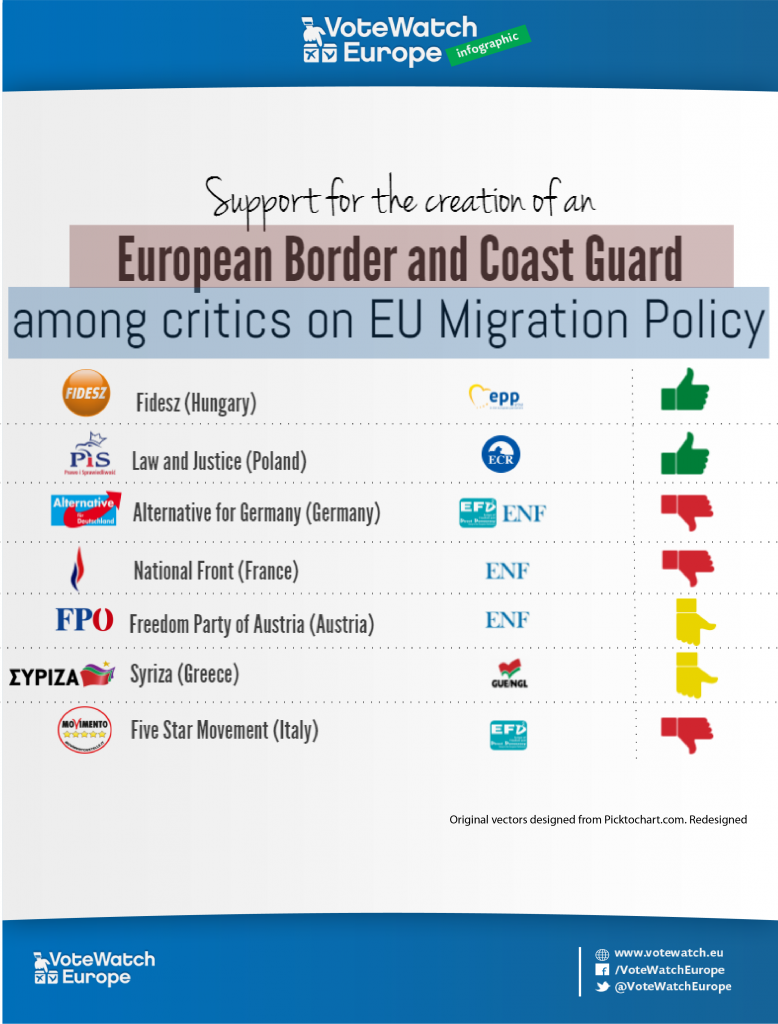 Quite interestingly, among the fringe groups in the European Parliament, parties from highly affected countries did not counter the proposal, as they abstained instead of voting against the text. The abstention of the party of Greek Prime Minister Alexis Tsipras, Syriza (GUE/NGL), is not very surprising, considering that Greece is one of the most affected countries by the refugee crisis and, as such, the ruling party is eager to find a solution, even if this implies a reduction in the rights of migrants. In the past the party already adopted a similar moderate position on the EU- Turkey Joint Action Plan on refugees and migration management. In fact, a critical amendment (28) on 2015 Report on Turkey, which was tabled by GUE-NGL, deploring the violations of human rights entailed by the agreement, was not supported by the Greek party, which abstained instead (the only one in the group).

Perhaps more stricking, the far right Freedom Party of Austria (FPO) was the only party of the ENF that abstained on the proposal. As in the case of Greece, Austria has been heavily affected by the outburst of the refugee crisis, whose perceived mismanagement boosted the consensus for the presidential candidate of the party, Norbert Hofer at the last election in May. The party is known for supporting a strengthening of national border control, although in this case it did not block a proposal aiming at strengthening the management of the common external borders of the Schengen area, which is in contradiction with the preference of the other far-right parties for scrapping the Schengen area altogether.

Furthermore, no divisions were observed across Bulgarian and Maltese MEPs (these countries are also affected by the migration crisis) since they all voted in favour of the creation of the agency.

The concerns about potential infringement of the sovereignty lifted by the EFDD and ENF were not shared by the ruling parties of Hungary and Poland, which in other circumstances, in particular on the redistribution of refugees across the Union, have loudly criticized the interferences of the EU on migration policy. In this case, both Vitkor Orban’s Fidesz (EPP) and Jarosław Kaczyński’s Law and Justice (ECR) supported the creation of the new agency. Although the final text empowers more the European Council than the European Commission (differently from the one originally proposed by the Commission), the establishment of a new agency will still lead to a soft centralization of the management of the external borders of the Schengen area.

In this sense, the vote showed that there is a difference between the right-wing parties renowned for their vocal opposition to the current EU’s migration agenda. In fact, members of ENF such as Marine Le Pen’s National Front and Geert Wilders’s Party for Freedom oppose any further centralization of border’s management in the EU and advocate for the end of the free movement of people across the Union. Instead, the Polish and Hungarian governments are willing to support initiatives from the EU as long as they focus on the protection of the borders and the fight against terrorism.

European Commission President Jean-Claude Juncker announced for the first time last September the establishment of a European Border and Coast Guard as a part of the actions to strengthen the security of the EU’s external borders.

The Commission presented a legislative proposal in December to create the agency, building on Frontex (the European Agency for the Management of Operational Cooperation at the External Borders of the Members States of the EU), with the aim of managing migration, improving the internal security of the European Union and safeguarding the principle of free movement of persons.

On 22 June 2016, the European Parliament, Council and Commission reached an agreement on the Commission’s proposal, which was voted in the Parliament on July 6.