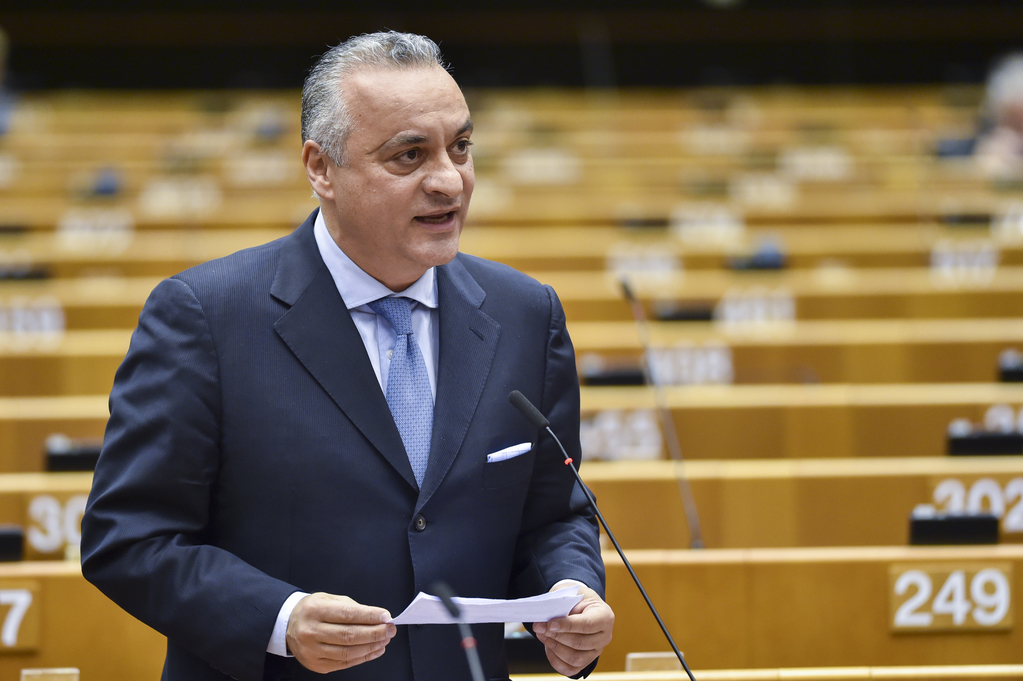 This report is the first instance of our new series on individual MEPs: Getting to know the decision-makers. In these reports we look beyond mere statements and learn the actual directions in which the politicians work to influence EU decisions. Over the past 11 years since we launched VoteWatch Europe, we have witnessed many situations in which stakeholders and citizens know very little or are even led into thinking the opposite of who influences and how the EU decision-making. To make this process more accessible to you, we are now launching this new series at a time when the European Commission is about to send its first initiatives to the Parliament. For more information, feel free to contact us at [email protected]

In virtue of its bigger size, the EPP group managed to get one of its MEPs, Greek Manolis Kefalogiannis, to be the rapporteur on one of the hottest legislative dossiers of the moment, namely the establishment of the Just Transition Fund. The Just Transition Fund is one of the key pillars of von der Leyen’s push for a greener Europe. In fact, the fund is conceived as a way to increase the overall level of support for the European Green Deal by providing financial compensation to the main ‘losers’ of the climate transition, namely the regions and sectors that are heavily reliant on fossil fuels and carbon-intensive activities.

While such a plan does not look particularly controversial at first sight, the devil is in the detail, as usual. Battles along both ideological and national lines are already taking place with regards to the size of the fund, the source of funding, the criteria to allocate the money and the type of projects to be considered eligible.

Given the premises, it will not be an easy task to steer such a report through the agitated waters of a more fragmented European Parliament. While the influence of rapporteurs on policy outcomes is often overestimated, Kefalogiannis is a key MEP to watch. For this reason, we thought it useful to look at his track record in the European Parliament, in particular with regards to his views on environmental and budgetary topics, but also on other issues where he has been involved, such as EU enlargement and neighbourhood policies.

VoteWatch Europe is a leading intelligence source on EU policy-making. We track all developments in the European Parliament and in the Member States and provide regular updates to our subscribers. We deliver tailored research, presentations or training on MEPs’  and governments’ likely positions and majority building in specific areas. If interested in a private service, send us an email ([email protected]) or give us a call (+32 2 318 11 88).

Background on the decision-maker

** For your convenience, VoteWatch Europe built a database on the new Parliament that you can use to easily find MEPs by committee membership, country, political affiliation, background, etc. Contact information such as official email addresses, phone numbers, physical addresses, twitter handles, and websites are also included. Are you interested? Then contact us at [email protected] to request the database.

The EP records provide us useful clues with regards to how Kefalogiannis is trying to shape EU policies.

Firstly, there are a few differences between the views of the Cretan MEP and his political group, as the Greek MEP agrees with the position of the EPP about 92% of the time on matters concerning the environment (which is relatively low). However, most of the disagreements are related to the regulation of genetically modified products and organisms, while on energy and climate policy he tends to see eye-to-eye with the rest of his centre-right colleagues, with the notable exception of nuclear energy (Kefalogiannis is less supportive of promoting nuclear power). This is quite important as the question of whether to exclude the construction of nuclear power stations from eligibility under the new Just Transition Fund is one of the main points of contention.

Bigger differences are observed with regards to budgetary policies, as the Greek MEP is rather supportive of increasing the EU spending power. Our data on voting behavior clearly shows that  his views tend to be closer to the left, compared to the views of the average EPP member. For instance, Kefalogiannis supports proposals by left-wing groups to increase EU funding of social and agricultural programs (such as the European Social Fund, the Youth Guarantee, and the European Agricultural Guarantee Fund), to establish a  fiscal capacity for the euro area and to introduce a new financial instrument to tackle long-term unemployment. Conversely, most EPP members favour a more restrained approach with regards to agricultural and social spending.

Due to their similar views on several budgetary issues, we can expect the Greek MEP to be more likely to try to find common ground with the left-leaning groups on the financing of the new fund. Left-wing groups already criticised the fund proposed by the Commission as too small and too reliant on resources from already existing funds. This position can find some support within the EPP, as a significant component of the group is made up of national delegations from countries that are set to be among the main beneficiaries of the new fund.

However, positions are likely to be more distant with regards to the conditions to be attached to the new instrument. For instance,  groups like the Greens are likely to demand a stronger alignment with climate goals as a condition to receive the funding. Such additional requirements are likely to be rejected by the centre-to-the-right groups, which are worried about the potential economic costs of a faster energy transition. The role of Kefalogiannis is set to be rather important considering the difficult strategic position of the EPP on environmental topics: our previous report showed that majorities on this policy area tend to be formed on the centre-left part of the political spectrum, while the EPP tends to be less successful also due to its lower cohesion.

Kefalogiannis’ key role in steering the policy process on the Just Transition Fund can be seen as a major opportunity for Greece, not only because the country is set to be one of the main beneficiaries (proportionally) of the instrument (about 300 million euros from the new fund). These developments might also indicate a reversion of the negative trend of Greek influence in the European Parliament. Our latest assessment of the influence of MEPs found that Greek MEPs performed the worst in terms of influence during the previous term of the European Parliament. The upcoming update of our influence assessment will provide definitive evidence on whether the relative positioning of the Greeks in Brussels and Strasbourg has improved since the elections in May 2019.

With regards to Kefalogiannis, this MEP can count on a relatively strong European network compared to most of his newly elected colleagues, as he has been a member of the EP since 2014, which allowed him to develop connections. Considering his previous experience as a member of the Greek Parliament (for 24 years), MEP Kefalogiannis is no foreign to parliamentary dynamics. Our previous assessments in 2016 and 2017 found that he was the most influential member of New Democracy (EPP) within the European Parliament.

As a former member of the Foreign Affairs committee, we expect Kefalogiannis to continue playing an active role with regards to the EU policies on Greece’s immediate neighbourhood. The Cretan MEP is currently a member of the EP delegation on Turkey and, most importantly, the chair of EP delegation on Albania.

However, due to the numerous points of contention between Greece and its neighbours, his track record indicates that Kefalogiannis’ positions on the Western Balkan enlargement process tend to be more critical compared to those of the EPP, in particular when it comes to Northern Macedonia, Albania, and Kosovo (the latter is not recognised as a country by Greece). For instance, Kefalogiannis voted against the EU-Kosovo Stabilisation and Association Agreement in 2016, while also falling short of supporting the most recent Parliamentary reports on the Albanian progress towards EU membership. Such positions put him at odds with the position of the EPP, whose increasing geographical orientation towards Central and Eastern Europe makes it one of the biggest supporters of a speedier (and smoother) integration of the Western Balkans into the EU framework.

Also in the case of EU-Turkey relations, the positions of Kefalogiannis tend to be harsher compared to the views of the EPP, which is not very surprising in light of the difficult bilateral relations between Greece and Turkey. However, the Cretan MEP seems to be even more critical of Turkey than his fellow colleagues from New Democracy. For instance, he was the only Greek EPP member to vote alongside the Cypriot EPP members in favour of stopping pre-accession funding for Turkey.

VoteWatch Europe is a leading intelligence source on EU policy-making. We track all developments in the European Parliament and the Member States and provide regular updates to our subscribers. We deliver tailored research, presentations or training on MEPs’  and governments’ likely positions and majority building in specific areas. If interested in a private service, send us an email ([email protected]) or give us a call (+32 2 318 11 88).