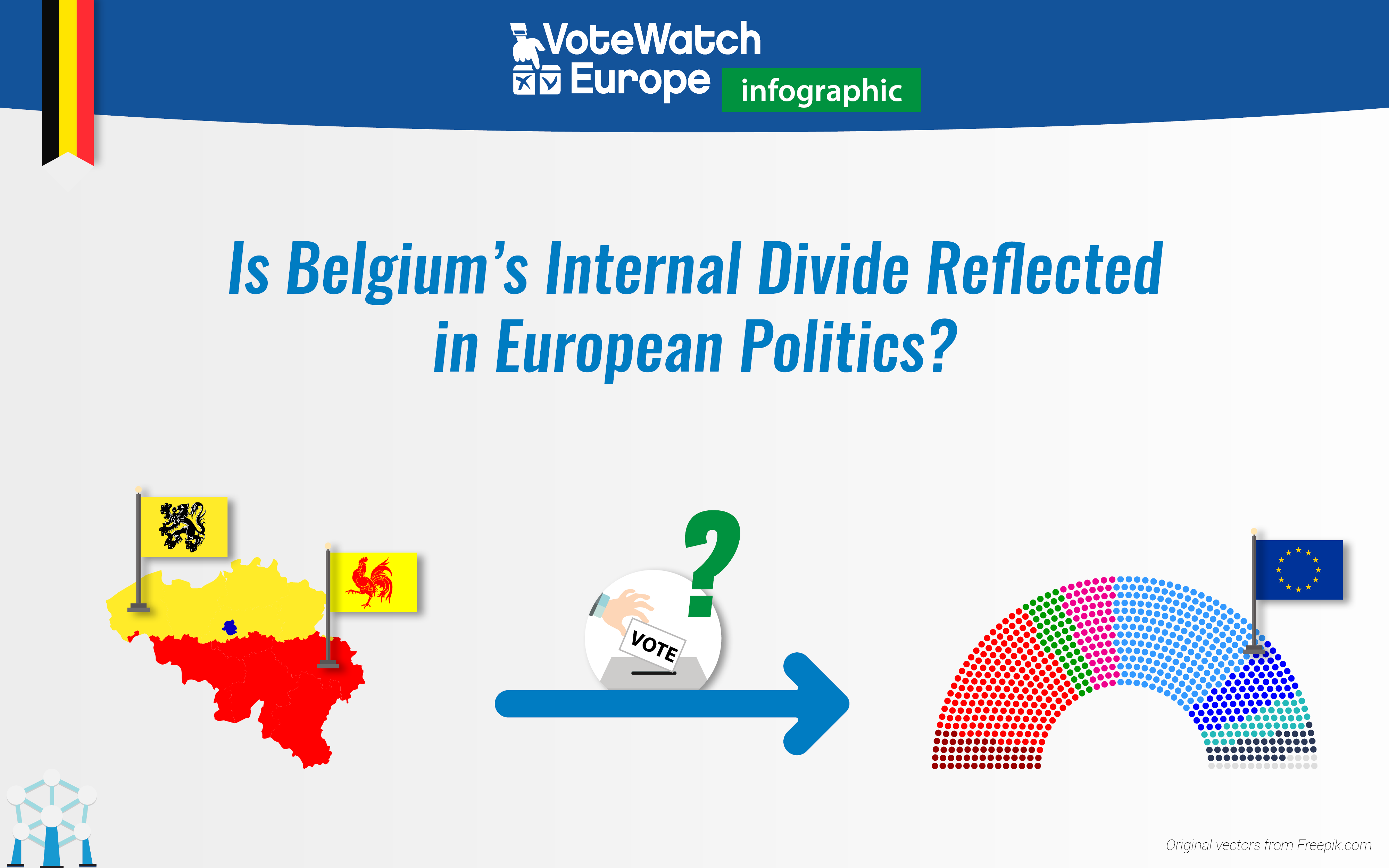 The Walloons are from Venus, the Flemish from Mars. Is it true what they say? Are the Belgians divided, and if yes, is this reflected when they take part in decisions made at the EU level? This report provides a comparative perspective of the positions taken by Belgian EU Parliamentarians on key issues voted recently in the European Parliament.

Please note that this is not a survey: we took into account the actual decisions made by Belgian MEPs, not merely opinions or carefully crafted political statements.

If you have questions or you want to know more about Belgian MEPs, do not hesitate to contact us at [email protected].

Note: as a matter of simplification, when referring to ‘Walloon’ EU Parliamentarians (MEPs), we also take into account the French-speaking MEPs from the Brussels-Capital region.

Do the Belgians vote according to the European political family they belong to?

Firstly, we looked at the voting behaviour of the Belgian EU Parliamentarians compared to their own political groups (which gather their counterparts from the rest of EU countries). We found that the Walloon Greens (ECOLO) and the Flemish liberals (Open VLD) are the most likely to vote with the majority of  their European group colleagues. A possible explanation is that these groups in the European Parliament (ALDE and the Greens) are chaired by two members of these Belgian parties: MEP Guy Verhofstadt chairs ALDE and MEP Philippe Lamberts is the co-chair of the Greens. On the other hand, Walloon Christian democratic MEP Claude Rolin (cdH) voted the least in line with his European political group.

In general, Flemish parties seem to be more likely to vote along the European group line than the Walloon delegations.

The infographic below shows how often Belgian MEPs voted along the line of the European groups they belong to: 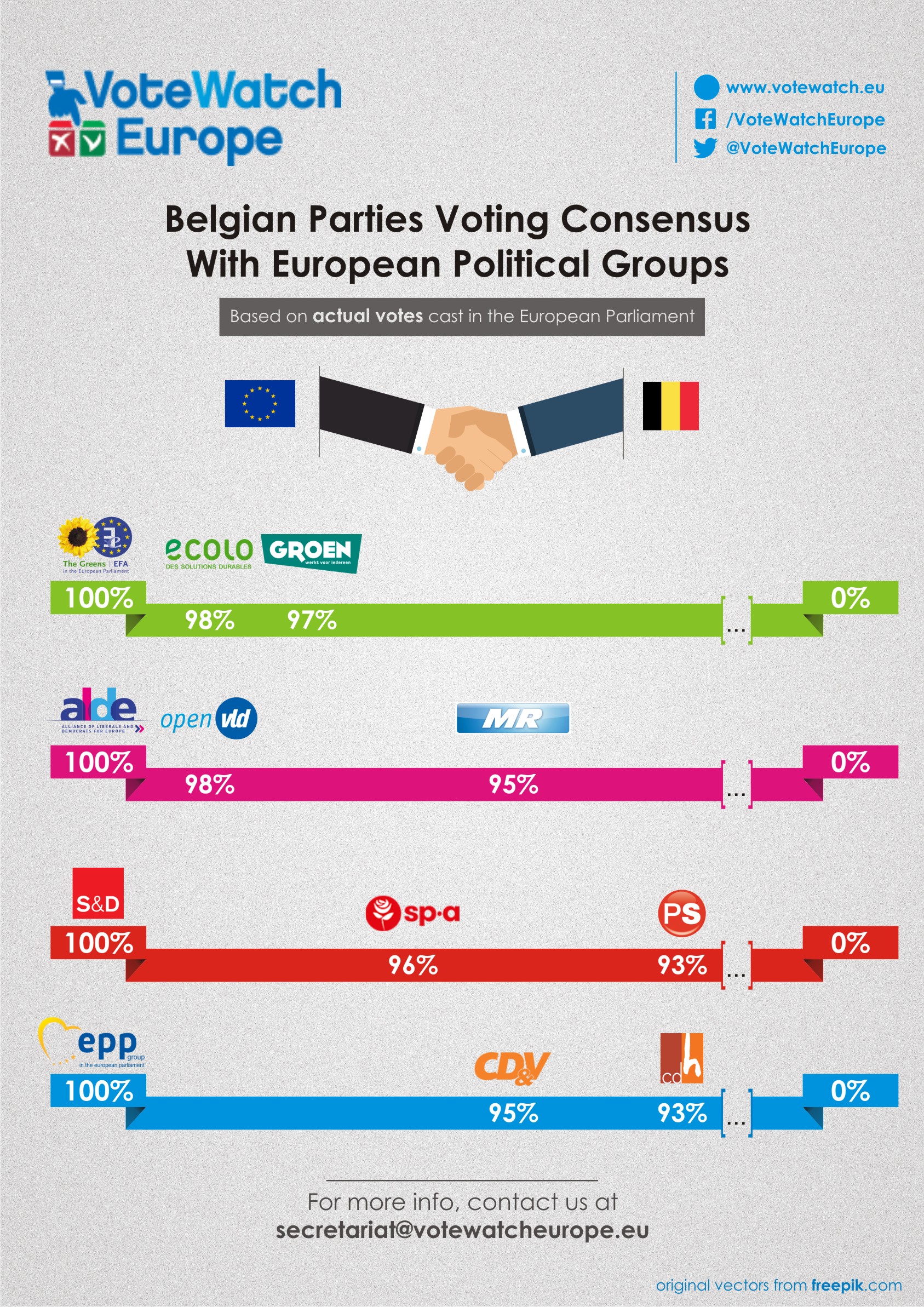 Do Flemish and Walloons within the same political groups vote  in the same way?

In most votes in the European Parliament the ideology is a stronger determinant of the positions taken by the elected representatives than their nationality. For this reason, we assessed how often Flemish political parties voted in the same way as their Walloon counterparts (belonging to the same European political group). From among the Belgian “pairs of parties”, the Greens (Groen-ECOLO) are the closest: they voted the same way in 96% of all the votes in the plenary. Among all the political groups under examination, the Belgians in the EPP are the farthest apart, agreeing in only 83% of cases (and disagreeing in the remaining 17% of the policy matters).

The infographics below shows how often Flemish and Walloon parties voted, on average, in the same way (based on actual votes in the European Parliament). 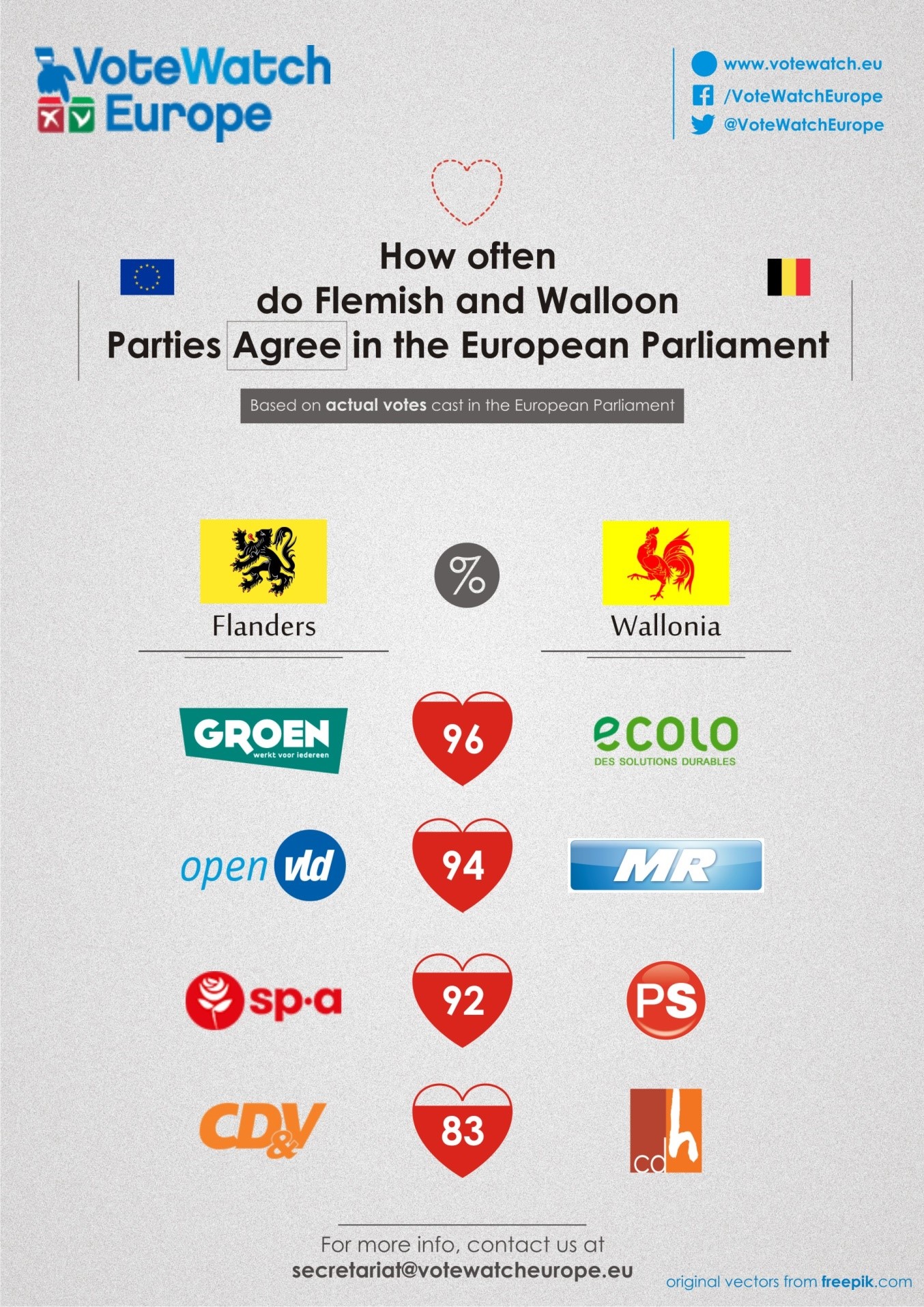 This agreement percentage is even lower in the case of Agriculture and Rural Development policy, where the Belgian EPP members from the two regions agreed in only 67% of cases. Also, they agreed in only 7 out of 10 cases when it comes to environmental policy. Agricultural and environmental policies are also the areas where the Belgian liberals from the two regions have the most different views.

On the other hand, consensus among Belgian parties was most often achieved on Budget, Constitutional Affairs, Employment and Social Affairs  and Internal Market and Consumer Protection.

One interesting area to look into is international trade, as some may remember the staunch opposition of the Walloon MEPs to CETA. In this area, we notice substantial differences between the pairs of parties in both the center-right EPP and the center-left Socialist group: 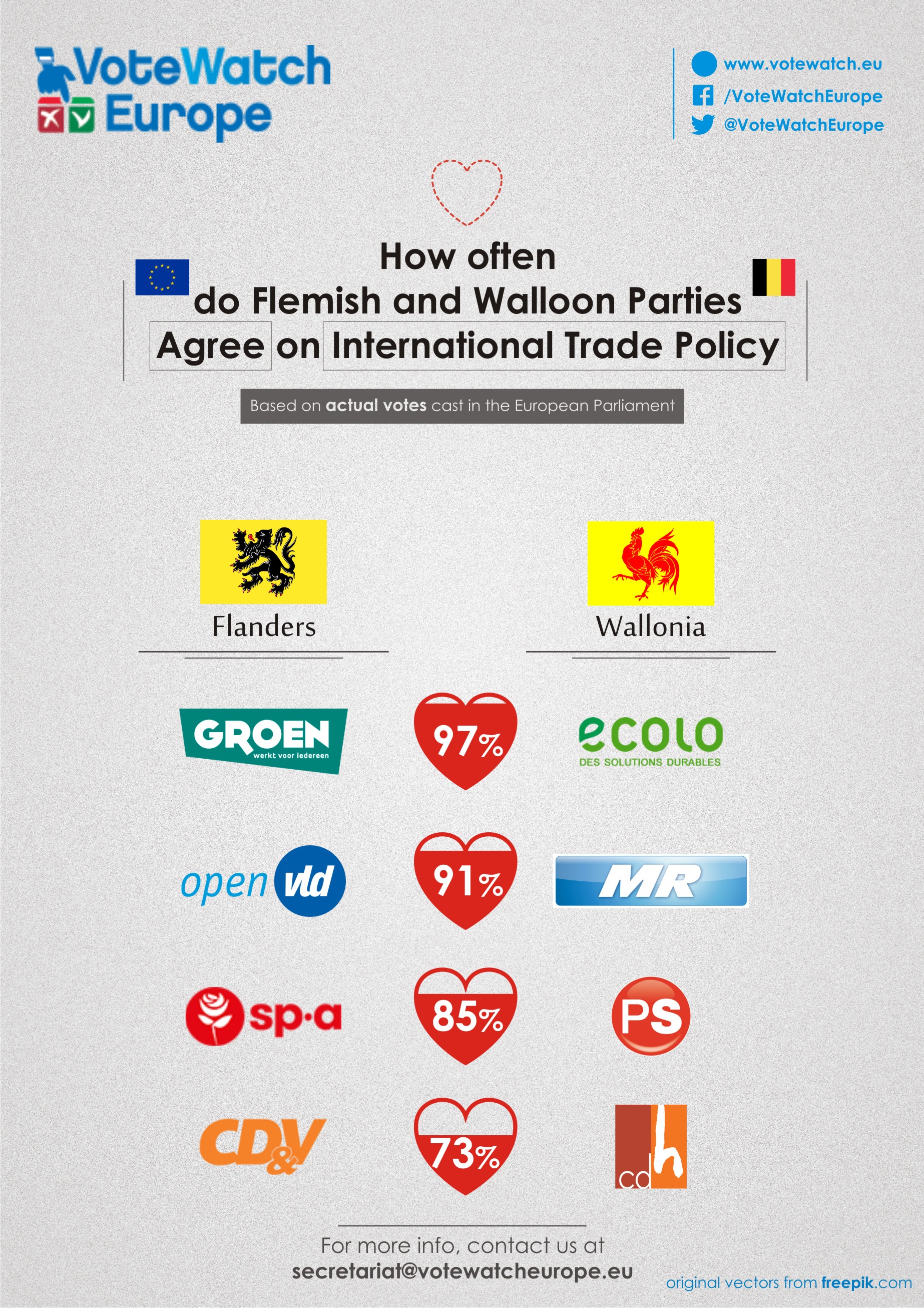 How did Flemish and Walloon MEPs vote on industrial policy, glyphosate and CETA?

Let’s now have a look at some key votes inherently connected to Belgium.

As a reaction to the closure of Caterpillar in Belgium, the European Parliament tabled a resolution on the need for an EU’s reindustrialisation policy. Our study revealed that Belgian MEPs, with the exception of the Flemish liberals, all approved an amendment criticising China’s “rapid and aggressive economic expansion into Europe and other parts of the world”. Even the Flemish nationalists of N-VA, economically right-wing, endorsed the criticism against China. The Walloon Liberal MEPs unanimously voted in favour of the above statement, despite the fact that the majority of their European Liberal group rejected this highly critical statement. In this case, there is a large consensus among the Belgian representatives at the EU that the Union should take measures to protect the European industry from China’s economic expansion. 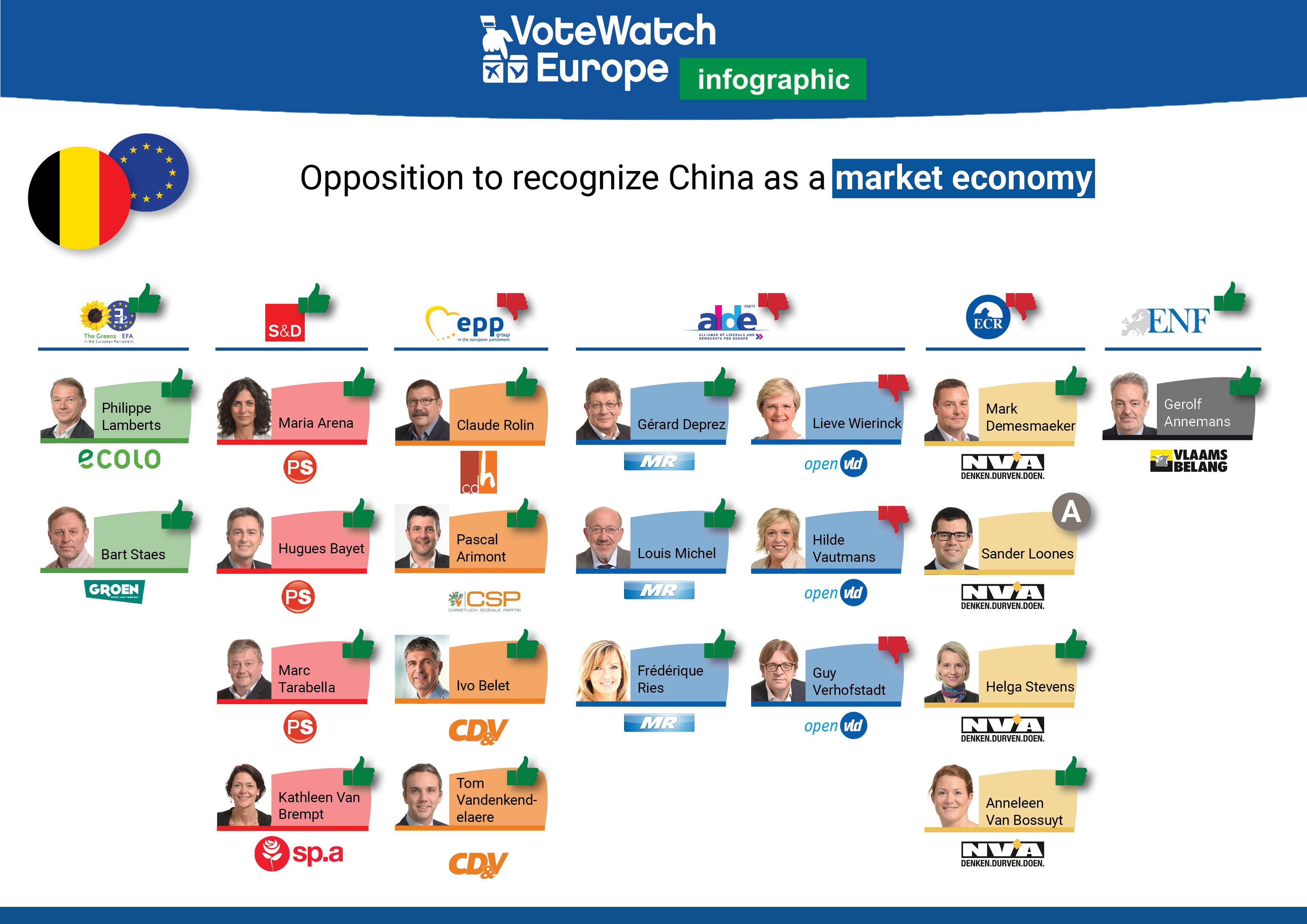 After the publication of dedicated reports in several Belgian magazines, controversy arose about the alleged attempts by the American company Monsanto to influence scientific research on the subject of the chemical substance glyphosate, the main component of the pesticide Roundup.

Last year, the European Parliament voted in favour of renewing the authorisation of the substance for seven years, although it strongly limited the circumstances in which this product can be used. How did the Belgian MEPs vote? And more specifically: can we spot any differences as to the voting behavior of the two parts of the country?

The Belgians were mainly against authorising glyphosate (71%). The Flemish delegation in the EPP voted in favour of the renewal, as well as a Walloon MEP, Louis Michel, from ALDE. Interestingly, the five other Belgian liberals either abstained or voted against the resolution. Overall, the Belgian EU Parliamentarians showed strong opposition to the use of this substance. 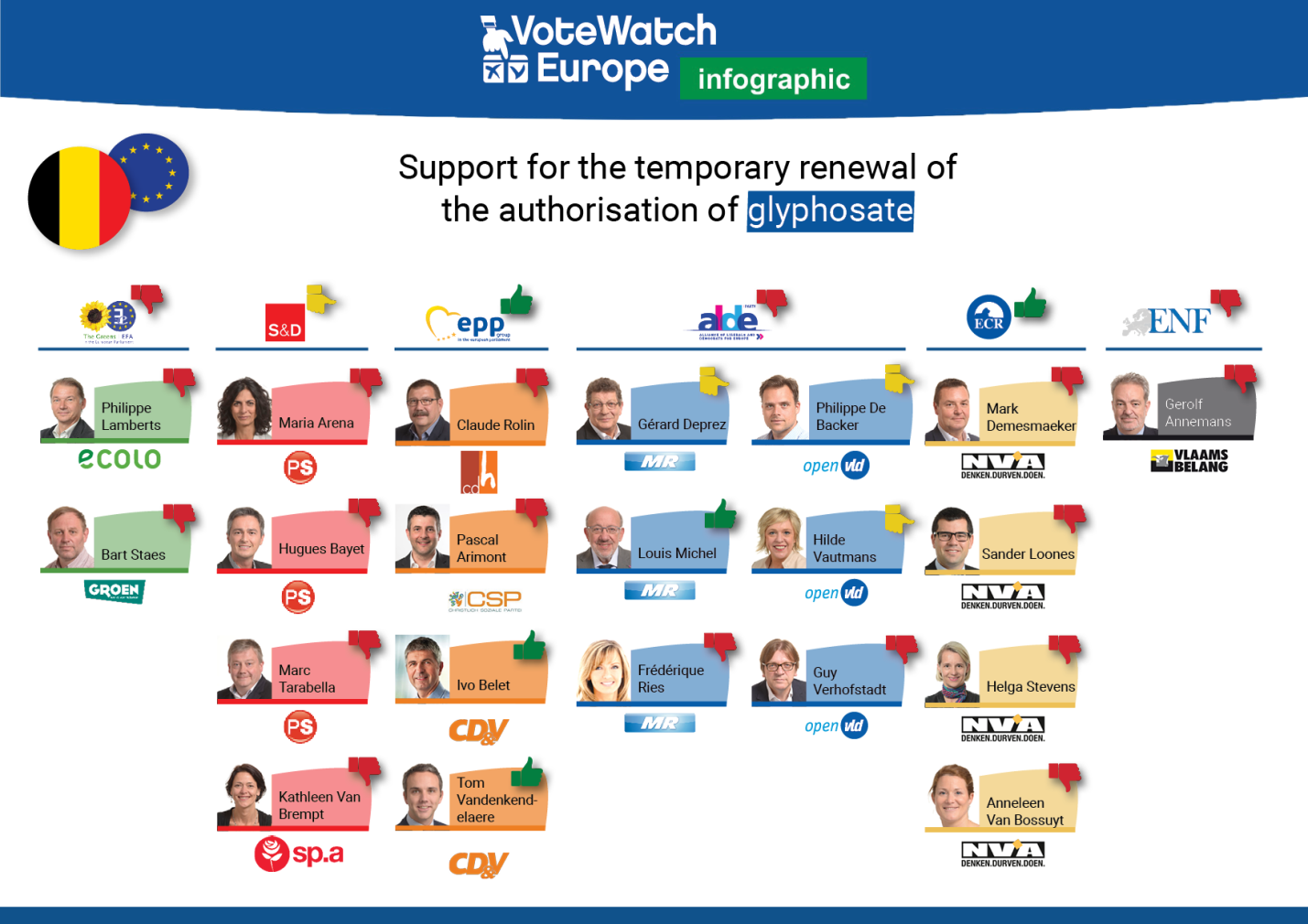 CETA brings us automatically to the Belgians. It was the Minister-President of the Walloon region, Paul Magnette, who – at least for a while – blocked the ratification of the trade agreement with the Canadians. Did the Belgian MEPs give their consent in the end? The Belgian Socialist MEPs indeed voted against CETA, despite the fact that most members of their European political group voted in favour of the trade agreement. Nevertheless, most Belgians from other political groups did endorse CETA in the end. As a case in point, this vote highlights the disagreement between the Flemish North on the one side and the Walloon South on the other: nine out of 11 Flemish MEPs voted in favour, whereas six out of nine Walloon MEPs voted against. 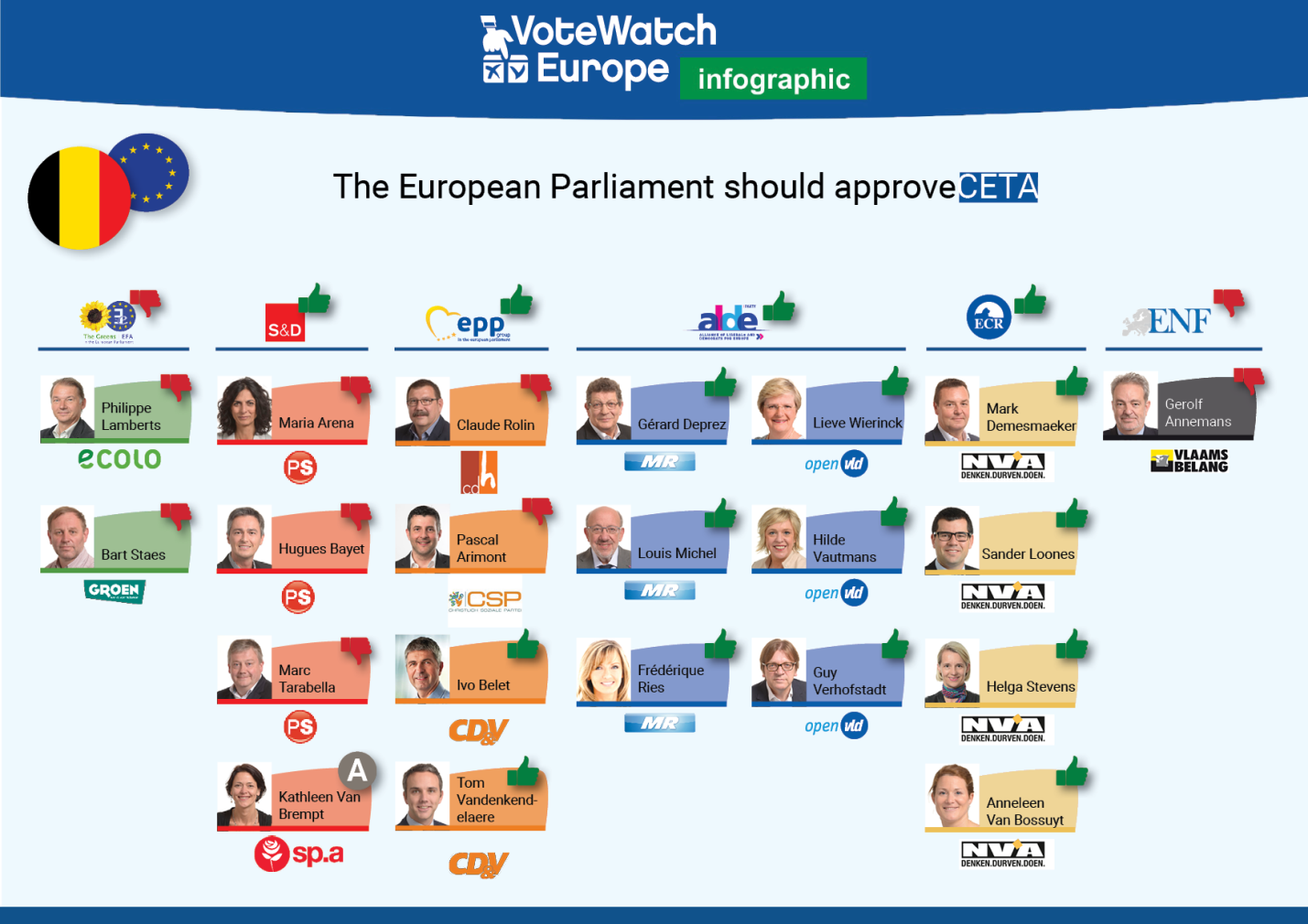 Who Are The Most Influential Belgian EU Parliamentarians?