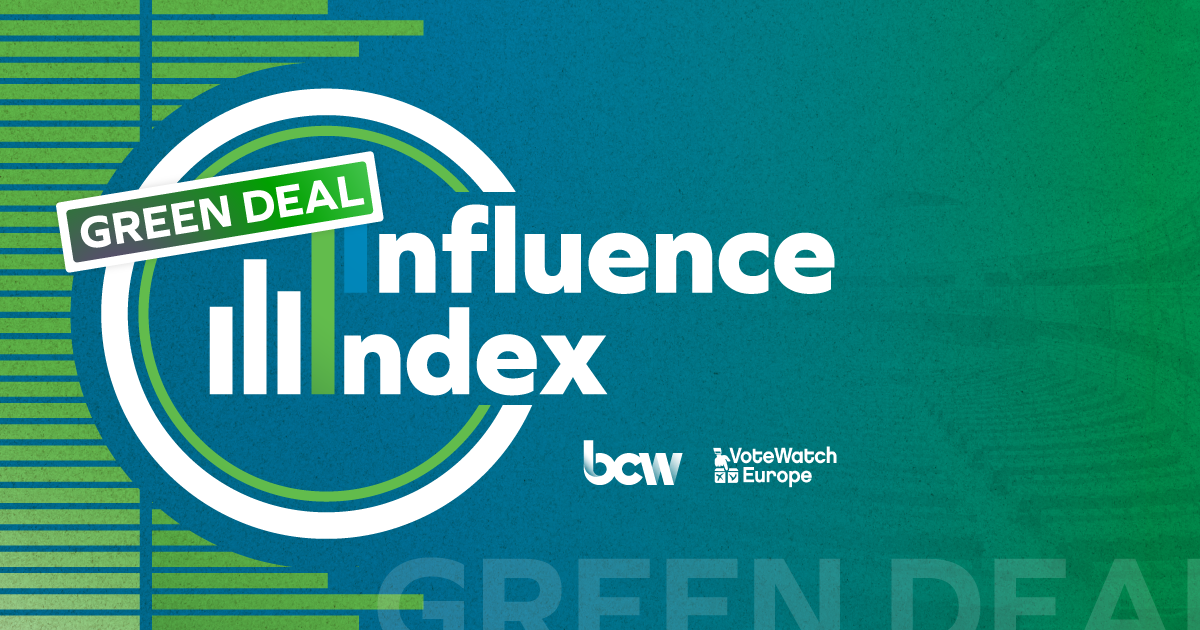 The following report sheds light on the top MEPs by political influence on the EU Green Deal.

Almost two years have passed since the European Commission launched the European Green Deal at the end of 2019. Despite the disruption brought about by the Covid-19 pandemic, the environmental debate continues to play a prominent role in the current legislative term. Notably, the Fit for 55 legislative framework was unveiled in July 2021 by the European Commission, containing legislative proposals to revise the EU 2030 climate framework and having implications across several policy areas. As previously identified by VoteWatch, the general trend amongst MEPs in the current parliamentary term seems to be moving towards a stronger pro-regulatory stance.

However, in the context of a majority of MEPs being onboard with climate protection, it might prove difficult to discern which MEPs are actually spearheading and shaping the debate from those who are just following suit. This is why careful thought has been given to our Influence Index, which accurately measures the impact of every MEP in this policy area.

VoteWatch has applied a comprehensive methodology to spot who these representatives of citizens’ interests are and the reasons that make certain MEPs more or less influential. As we are now well into the current legislative cycle, we can have a clearer picture of which MEPs are shaping legislative files. To read the full methodology, click here.

1. The research below does not include the views of the MEPs, i.e. the directions in which they are likely to push and pull EU legislation. To find out the positioning of MEPs on climate issues, you can find our advanced mappings on the Fit for 55 legislative package, energy, due diligence or fisheries here. Contact us at [email protected] for additional information.

2. Always keep in mind that while individual MEPs are the visible signatories of initiatives or amendments, in reality, their views are shaped (and their margins of manoeuvre are limited) by bigger political and societal forces that converge when policy-making is being done. Ignoring those forces can lead to surprises, so make sure you do not just look at the visible MEPs, who are just the tip of the iceberg, but also look at their colleagues, networks and other stakeholders surrounding them, i.e. keep in mind that 90% of the iceberg is “below the sea level”. Feel free to contact us to learn more.

#1: Pascal Canfin is currently the most politically influential MEP on climate and environmental policy. The French MEP is the Chair of the Committee on Environment, Public Health and Food Safety (ENVI) who has been a shadow rapporteur on the European Parliament’s own initiative report on the Carbon Border Adjustment Mechanism. He holds the prestigious first place furthermore thanks to his many contributions to legislation on energy efficiency, biodiversity, the sustainable growth strategy and his particular activity on the Fit for 55 package this year. Moreover, he has been vocal in his opinion in regards to financial aspects of EU functioning, e.g. Sustainable Growth Strategy 2021, which is crucial since we have entered the new Multiannual Financial Framework. Find his full profile here.

#2: Bas Eickhout is the second most politically influential MEP on climate and environmental policy. He is a vice-chair of the Committee on Environment, Public Health and Food Safety (ENVI), as well as the coordinator for his political group. Additionally, he holds leadership positions as Vice-chair of Greens/EFA. Serving his third parliamentary term, Bas Eickhout has proven to carry out extensive work on environment files, and continues to exert strong political influence over the EU climate agenda in 2021. Find his full profile here.

#3: Jytte Guteland is the S&D coordinator in the Committee on Environment, Public Health and Food Safety (ENVI), as well as a member of the Committee of Inquiry on the Protection of Animals during Transport (ANIT). She is currently serving her second parliamentary term, after having been a political advisor at the Ministry of Finance and the Ministry of Education in Sweden. She was one of the main negotiators for the revision of the EU Emissions Trading System in the previous term, which already positioned her as a key player in environmental issues. The Swedish MEP is at post second term and so has already been allocated an influential position, and this is strengthened by an extensive network. Being the rapporteur for the Framework for Achieving Climate Neutrality, she is the third MEP in the Green Deal political influence ranking. Find her full profile here.

#4: Anja Hazekamp holds the fourth position in the ranking. The Dutch MEP works on behalf of The Left group in the European Parliament and her national party is the Party for Animals, specialized in animal welfare. She is the vice-chair of both the ENVI and ANIT Committees. Moreover, she is a member of the Committee on Fisheries, and has participated as a shadow rapporteur on several reports related to this field. She has very recently been appointed rapporteur for the report on the Farm to Fork strategy, increasing her relevance on environmental and agricultural issues. She has been involved in many climate-related reports as a shadow or opinion rapporteur, such as the EU strategy to reduce methane emissions, the new approach to the Atlantic maritime strategy, or with regards to deforestation. One of the latest developments which has elevated her political influence is her participation in the Parliament’s resolution on the use of animals in research and testing. Find her full profile here.

#5: Nils Torvalds is the fifth MEP in our 2021 Green Deal political Influence Index. He is currently serving his third term at the European Parliament as part of the Renew Europe group. He is the coordinator for his group in the ENVI Committee. He is well known in his home country, Finland, where he was a candidate for the presidential election of 2019. On top of this, he has been a rapporteur on relevant legislative acts including the Programme for the Environment and Climate Action (LIFE) and for the Framework to achieve climate neutrality (shadow rapporteur). Find his full profile here.

As reflected by the top politically influential MEPs on the Green Deal pillar, members from the centre-to-the-left side of the political spectrum continue to outperform others in terms of political influence. This is also true when looking at the proportional influence of different political groups (regardless of their size), which reveals the S&D group as the best performing political family in 2021 (followed by Renew Europe and Greens/EFA). The S&D group has also shown the most significant gain in share of political influence since 2020, with members holding more rapporteur and shadow rapporteur positions on relevant legislation.

It should be noted that the distribution of political influence in the Green Deal pillar is once again substantially different from other policy areas, where the EPP tends to dominate the top rankings. For the second year in a row, no member from the EPP has made it to the top 5 most politically influential MEPs when it comes to climate, and only 3 are to be found in the top 20.

The general trends observed in 2021 are in line with our findings from the previous year, with the centre-left side of the political spectrum overperforming and the opposing camp underperforming. While the centre-to-the-left has made addressing climate change an essential part of their “mandate”, the influence of the right-side of the European Parliament continues to be dented by internal divisions on how to weigh economic considerations. Such a trend is intensified by the fact that, as identified by VoteWatch, Renew Europe often plays a pivotal role on climate initiatives by tilting the balance of power towards the pro-regulatory camp, leaving the pro-market camp on the losing side of the most divided proposals.

Following the trends from our 2020 influence assessment, the top 4 Member States (Spain, Finland, Portugal, the Netherlands) remain at the top of the political influence ranking in 2021.

The performance of these national delegations when factoring their relative size in the European Parliament is influenced by their high number of MEPs from the two most influential political groups in this policy area, namely S&D and Renew, who are often able to build winning coalitions in the EP. This is the case for Spain, whose national delegation is the largest one in S&D and the second largest in Renew Europe, or Portugal, whose high share of S&D members substantially improves Portugal’s political influence in the Green Deal pillar.

On the other side of our political Influence Index, Poland, the Czech Republic and Germany are politically underperforming in Green Deal policies. In particular when it comes to Poland and the Czech Republic, and to a lesser extent in the case of Germany, these MEPs tend to reflect the majoritarian positions in their countries and be more critical towards stricter Green policies, which could deeply hurt their economies from coal mining to the car industry, etc. However, such policy positions put them in the minority in the European Parliament.