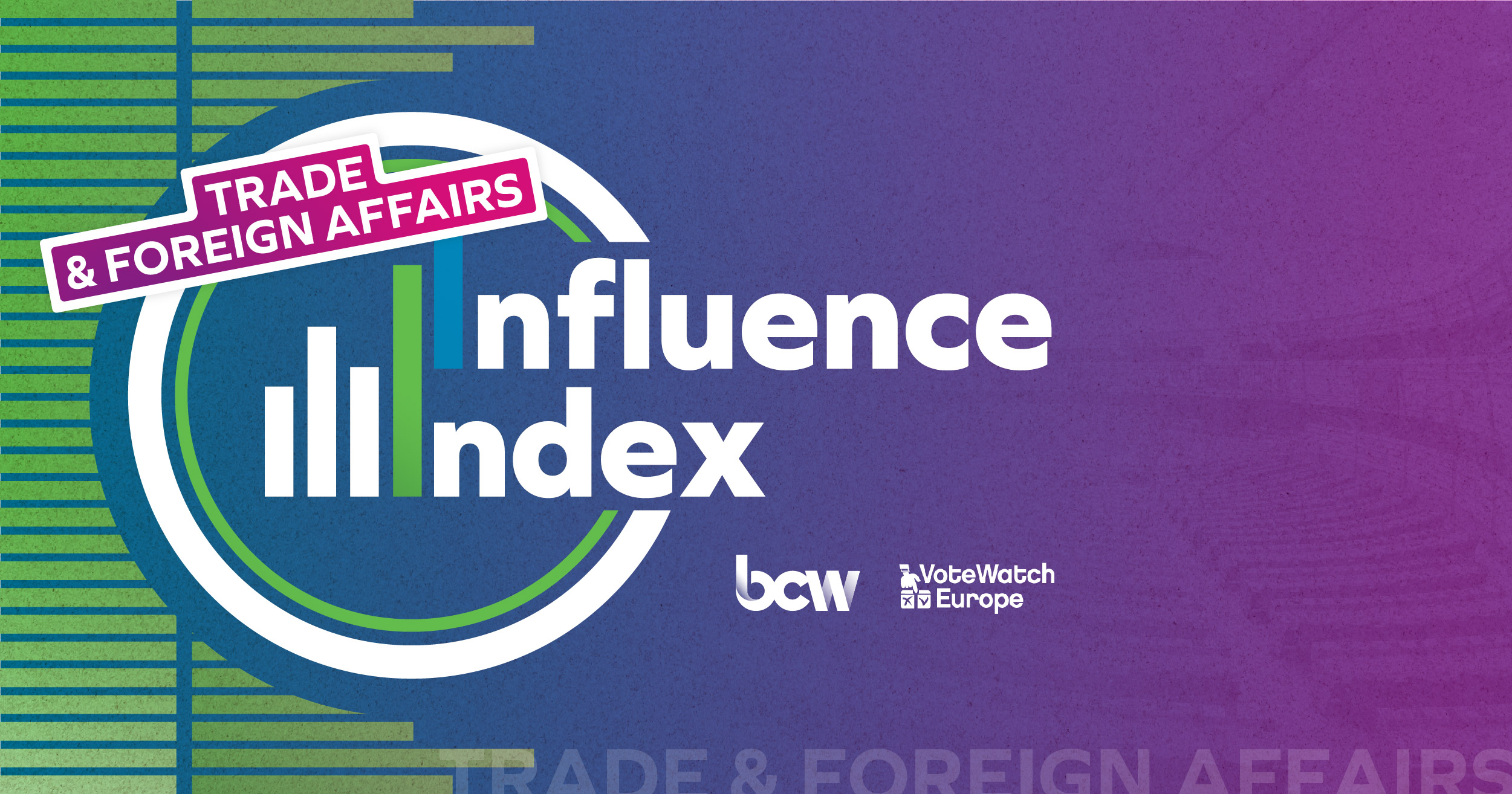 The following report sheds light on the top MEPs by political influence on the Stronger EU Pillar.

After revealing the most influential MEPs on climate, health and digital policies, VoteWatch looks into the distribution of political influence regarding EU external relations. Based on von der Leyen’s political guidelines, specifically the “Stronger EU” pillar, this assessment looks into which MEPs have the potential to influence EU foreign agreements, trade deals, and development aid. With the current parliamentary term well underway, this year’s influence index includes more data on the legislative performance of MEPs on these policy areas (notably when it comes to relations with the US, China, Russia or the UK).

Both the Committees on Foreign Affairs (AFET) and International Trade (INTA) remain some of the most popular as many MEPs are either interested in international relations or have a diplomatic background. This is also the favourite specialisation of the former Presidents and Prime Ministers who are ending their political careers in the European Parliament. As this is a competitive and high-stakes policy area, MEPs need to up their game in order to gain influence, either through extensive networks or expertise. However, since such assets often come with seniority, no first-term MEPs made the top 5 of this influence assessment. To read the full methodology, click here.

1.The research below does not include the views of the MEPs, i.e. the directions in which they are likely to push and pull EU legislation. To find out more on the positioning of MEPs on EU external policies, make sure to take a look at our advanced mappings on foreign affairs, defence policy and international trade. Contact us at [email protected] for additional information.

2. Always keep in mind that while individual MEPs are the visible signatories of initiatives or amendments, in reality, their views are shaped (and their margins of maneuver are limited) by bigger political and societal forces that converge when policy-making is done. Ignoring those forces can lead to surprises, so make sure you don’t just look at the visible MEPs, who are just the tip of the iceberg, but also look at their colleagues, networks and other stakeholders surrounding them, i.e. keep in mind that 90% of the iceberg is “below the sea level”. Feel free to contact us to learn more.

#1: German S&D member Bernd Lange is currently the most politically influential MEP when it comes to the EU’s external policies. Currently serving his fifth term, he is the Chair of the Committee on International Trade (INTA). As part of the Committee on Industry, Research and Energy (ITRE), Bernd Lange is also very active on energy issues, including in the context of relations with trade partners. As a rapporteur, he has recently been involved in dossiers related to EU-US or EU-UK relations, or the Parliament’s resolution on the EU Trade Policy Review. Find his full profile here.

#2: CDU member David McAllister (EPP), also from Germany, is the second most politically influential MEP on EU external policies in 2021. He is currently serving as the Chair of the Committee on Foreign Affairs (AFET) and was notably the rapporteur on the EU global human rights sanctions regime. Currently in his second parliamentary term, David McAllister is also a member of the Delegation to the Cariforum-EU Parliamentary Committee and the Delegation for relations with the NATO Parliamentary Assembly. As a substitute, he is also part of the Subcommittee on Security and Defence (SEDE) and the Special Committee on Foreign Interference (INGE). Find his full profile here.

#3: Tonino Picula is the third most politically influential MEP on foreign affairs in 2021, in particular when it comes to the Western Balkans. He has extensive professional experience in this field, as he was Foreign Affairs Minister, Head of the OSCE Monitoring Missions in Eastern Europe and has chaired the EP Bosnia and Herzegovina and Kosovo delegation. The Croatian Social Democrat is the AFET coordinator for his political group, as well as a member of the Special Committee on Foreign Interference (INGE) and a substitute in the Subcommittee on Security and Defence (SEDE). He has most recently been the rapporteur on the Parliament’s own initiative report concerning the future of EU-US relations. Find his full profile here.

#4: French Renew member Nathalie Loiseau is the fourth most politically influential MEP on EU foreign policy in 2021. Loiseau became a French diplomat in 1986 and has extensive experience in diplomatic missions in Asia, Africa and the US. From 2017 to 2019, the French MEP served as Secretary of State for European Affairs. Currently in her first parliamentary term, Nathalie Loiseau holds several relevant positions in the EP. Notably, she is the coordinator for Renew Europe for the Special Committee on Foreign Interference (INGE) and she currently serves as the chair of the Subcommittee on Security and Defence (SEDE) and as the vice-chair of the Delegation for relations with the NATO Parliamentary Assembly (DNAT). Find her full profile here.

#5: CDU member Michael Gahler holds the fifth place in our 2021 ranking of political influence on EU external relations. A former diplomat, Gahler’s main interests are development and foreign policy. Besides being the coordinator of EPP on the AFET committee and the vice-chair of the ACP-EU delegation, Gahler has built a strong network during his extensive career as an MEP (he is now serving his sixth parliamentary term). He is notably the Vice-chair of the Delegation to the ACP-EU Joint Parliamentary Assembly. Find his full profile here.

The general trends observed on the Stronger EU Pillar create a certain contrast with the results on Green Deal of Health policies, where the left side of the political spectrum is performing comparatively better. As reflected by the top influential MEPs on EU external policies, members from the centre-to-the-right side of the political spectrum continue to outperform others in terms of political influence. This is also true when looking at the proportional influence of political groups (regardless of their size), which reveals the EPP group as the best performing political family in 2021 followed by S&D and Renew Europe.

ECR members are also overperforming when it comes to external policies, while The Left, Greens/EFA and, especially, ID are the lowest performers in this policy area. This is notably due to the fact that coalition-building on foreign policy and trade features a stronger involvement of the ECR group (which shares similar views as EPP and Renew) to the detriment of the Greens and The Left, which are more isolated.

Among the top ranked MEP, German MEP hold three positions within the Top 5 most influential MEP. This is a clear indication of the relevance of the EU foreign policy for the largest country in the EU. In this regard, the main EP committees for this policy area have been chaired by two German MEP – Davic McAllister, chair of AFET (EPP) since 2017, and Bernd Lange, chair of INTA (S&D) since 2014 – from both the center-left and center-right main German parties. However, Germany is not among the most overperforming countries in the political influence in the Stronger EU pillar due to its relatively high share of MEPs from less influential political groups in this policy area, such as the Greens/EFA, The Left and ID.

Interestingly, our political influence analysis further confirms the trend identified last year with several CEE member states among the most over-performing national groups (regardless of their size). This is the case of Poland (2nd), Romania (3rd), Estonia or Lithuania. Notably, the high influence of some of the CEE member states is paramount of promote the views of their MEPs with regards the EU external relations, stressing the importance of close transatlantic security and political relations and strong opposition towards any potential rapprochement with Russia.

On the bottom side of the ranking Italy and France are considerably underperforming in the Stronger EU pillar. Both national delegations are negatively affected by the large presence of ID MEP within their ranks, which is undeniably the most underperforming political group in our Influence Index 2021. Especially striking is the case of France given the relevance of the strategic autonomy in EU foreign policy for Macron’s administration and its push for an EU army.