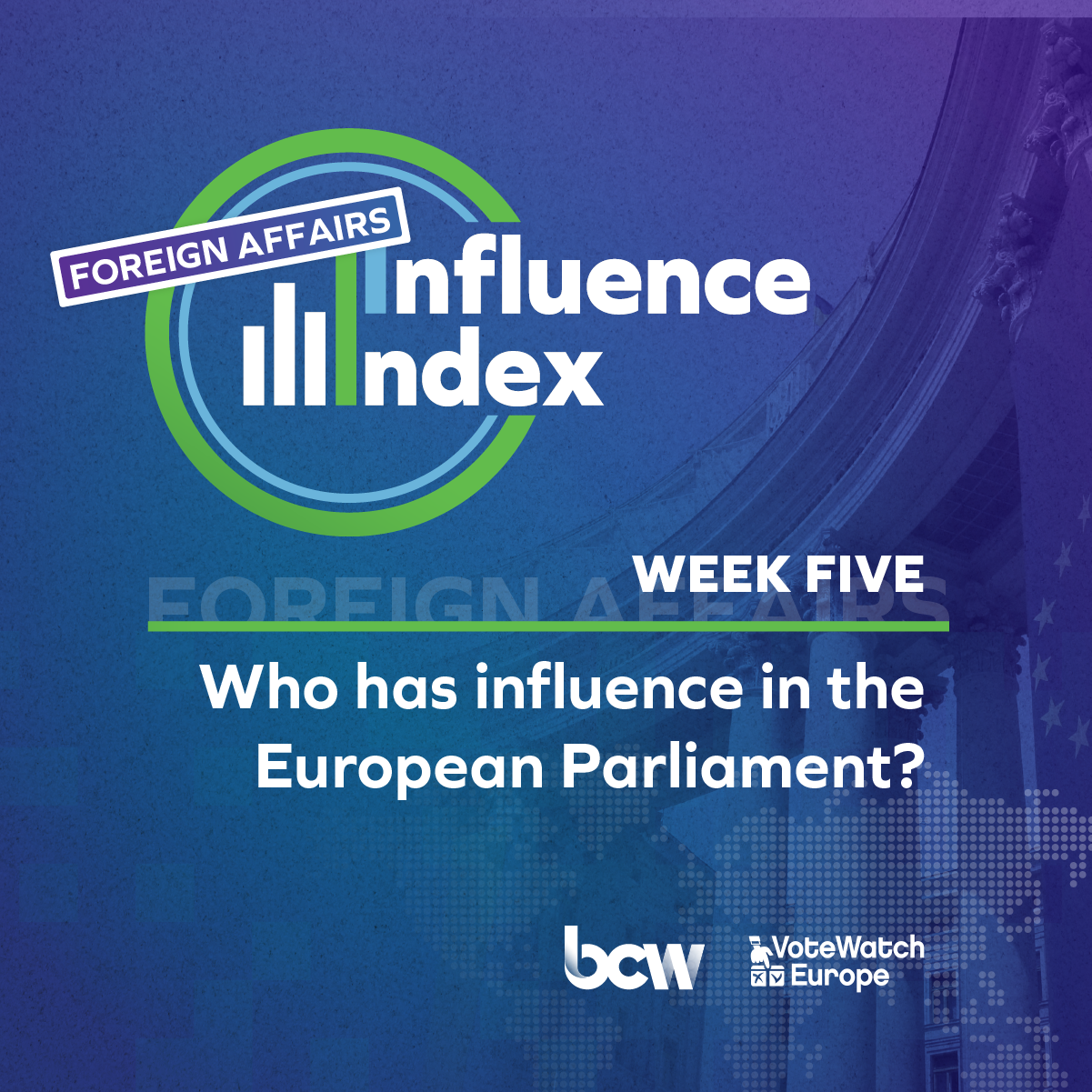 The following report sheds light on the top MEPs by political influence on EU external policies. The full results are available on the dedicated website.

Following our assessment of political influence on health policy, the Green Deal, digital policy, and the economy, this week, VoteWatch looks into the distribution of political influence regarding EU external relations. Based on von der Leyen’s political guidelines, specifically the “Stronger EU” pillar, this assessment looks into which MEPs have the potential to influence EU foreign agreements, trade deals, and development aid.

Von der Leyen made a splash when she announced that her top priority as the President of the Commission is to increase the international clout of the EU through her so-called “geopolitical Commission”. Despite pundits having doubts about the feasibility or desirability of this pursuit (what the EU lacks in “international clout”, it makes up in global market share and regulations), the Commission is more-or-less forced to make tough decisions about the EU’s role in the world as the Covid-19 pandemic is further intensifying the already existing tensions with the other important international players, such as with the “difficult” allies on the other sides of both the Atlantic and the English channel, not to mention “systemic rival” China and geopolitically-assertive Russia.

As many important decisions are yet to be made regarding the EU’s relations with China, Russia, the US and the UK, VoteWatch reveals which MEPs are most likely to leave a mark on these issues. Despite its relative decline over the past few years, AFET remains one of the more popular committees as many MEPs are either interested in international relations or have a diplomatic background. This is also the favourite specialisation of the former Presidents and Prime Ministers who are ending their political careers in the EP. As this is a competitive and high-stake policy area, MEPs need to up their game in order to gain influence, either through extensive networks or expertise. However, since such assets often come with seniority, it is not surprising that no first-term MEPs made the top 5 of this influence assessment. To read the full methodology, click here.

1) Michael Gahler from Merkel’s CDU has currently the most potential to influence the EU’s foreign affairs. Besides being the coordinator of EPP on the AFET committee and the vice-chair of the ACP-EU delegation, Gahler has built a strong network during his extensive career as an MEP (he is now serving his sixth parliamentary term). A former diplomat, Gahler’s main interests are development and foreign policy. This MEP chaired the EP Pan-African Delegation for many years, and he is in charge of the annual report on the EU association agreement with Ukraine.

2) Croatian Tonino Picula (S&D) is the second most politically influential on foreign affairs, especially regarding the Western Balkans. The Croatian Social Democrat is in charge of drafting the annual progress report of Montenegro and is chairing the Western Balkans EP Working Group. Recently, this MEP drafted the EP recommendation regarding the 2020 Western Balkans summit. Additionally, Picula, currently in his third term in the EP, is in charge of coordinating S&D’s position on the AFET committee. Picula has extensive professional experience as he was Foreign Affairs Minister, Head of the OSCE Monitoring Missions in Eastern Europe and has chaired the EP Bosnia and Herzegovina and Kosovo delegation.

3) German Bernd Lange is the third most politically influential MEP on foreign affairs, especially on international trade and energy issues. Currently serving his fifth EP term, Lange first joined the European Parliament in 1994. The German MEP leads the INTA committee and is one of the vice-chairs of the S&D group. Lange is known for having drafted the EP resolution on TTIP, which raised many tensions in the institution at the time, and recently drafted a less controversial report on the EU partnership agreement with the Solomon Islands. Lange first joined the European Parliament in 1994.

4) German MEP David McAllister, from CDU, is the fourth most politically influential MEP on the EU’s external policies. This MEP is leading the AFET committee and is the Chair of the EP-UK coordination group. He is the rapporteur on the key annual report implementing the Common Foreign and Security Policy. McAllister is rather influential within his political family as one of the Vice-Presidents of the EPP party. Finally, before taking office in the EP, he was Prime Minister of Lower Saxony (one of the largest German Länder by population).

5) Lithuanian Petras Auštrevičius (Renew Europe) is the fifth most influential MEP in this influence assessment. Auštrevičius is currently serving his second EP term and he is chairing the EP Delegation to Afghanistan. However, his main interest is in the Eastern neighbourhood of the EU. The Lithuanian drafted recommendations related to Belarus and the Eastern Partnership. He also coordinates the position of Renew Europe within the EP sub-committee on Security and Defence. Before joining the Parliament, Auštrevičius was the Chief Negotiator for Lithuania’s EU membership, Ambassador to Finland and adviser to the Lithuanian Prime Minister on Foreign Affairs.

Although slightly underrepresented in the top 5 positions, Renew Europe MEPs are, on average, the most influential on EU external policies (trade, foreign affairs, development), followed by EPP members. Conversely, Social and Democrats are significantly lagging behind the other two main groups (there are only 4 S&D members among the top 20 most influential MEPs, showing that Picula and Lange are outliers within the group).

This is in line with our previous findings on the performance of political groups across different policy areas. S&D tends to have lower cohesion (i.e. the group is less united) and be less often in the majority compared to the EPP and Renew Europe when voting on foreign policy and international trade. The woes of S&D clearly have an impact on the influence of its individual members. Additionally, differently from policy areas such as the environment, coalition-building on foreign policy and trade features a stronger involvement of the ECR group (which shares similar views as EPP and Renew) to the detriment of the Greens and the left, which are more isolated. This is also visible in the influence of individual MEPs, as ECR members, on average, outperform Greens and far-left members.

Similarly to our previous digital assessment, we observe a heavy presence of Germans MEPs among the top 5 most influential MEPs on the EU foreign affairs dimension, which highlights the importance of this policy area for the two governing parties of the largest EU country. Importantly, members of the German grand-coalition have been placing themselves at the helm of the two main committees dealing with external relations: CDU’s Brok and McAllister have been chairing AFET since 2012, while Lange from SPD has been chairing INTA since 2014.

However, although the Germans are punching above their (already big) weight, other national groups are, on average, performing better than Germany (that’s because other German MEPs drag down the average score of the delegation as a whole). Interestingly, apart from the case of Luxembourg (whose average score is driven up by Goerens), we found Baltic and Polish MEPs to be the top performers with regards to the EU external relations. This is rather important as these national delegations tend to be among the most supportive of close relations with the US and most opposed to any rapprochement with Russia.

While this assessment, as already mentioned earlier, does not take into account the policy views of MEPs, the distribution of influence seems to be favoring one of the two sides of the policy spectrum, as far as Russia is concerned. For more information on the direction in which policymaking is shaped by the most influential MEPs, feel free to contact us at [email protected] or +3223181188.

Click here for more detailed information on the methodology for the assessment of political influence.