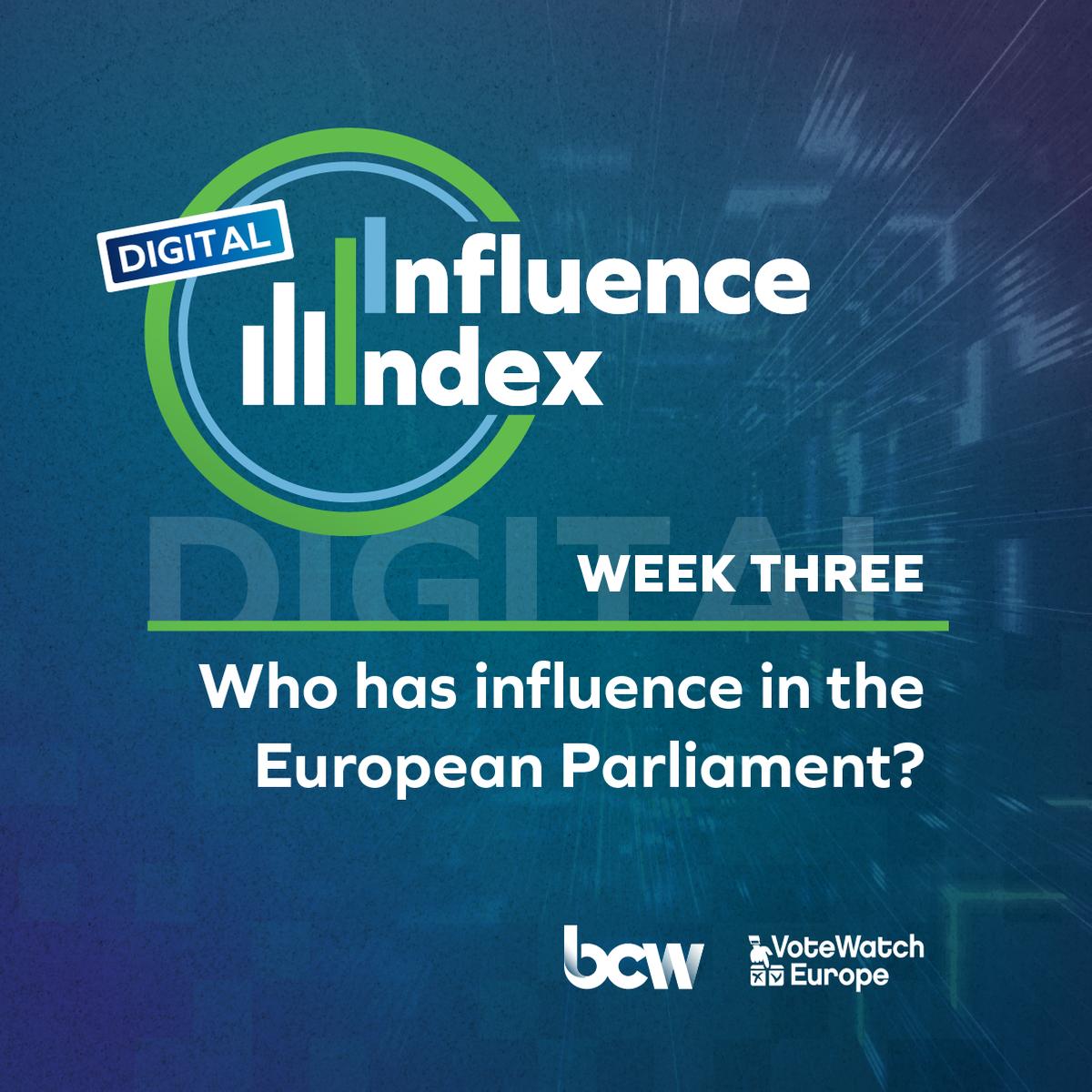 The following report sheds light on the top MEPs by political influence on EU digital policy. The full results are available on the dedicated website.

Following the influence assessment of two of the currently most salient EU policy areas, namely health and the Green Deal, VoteWatch has assessed the distribution of political influence with regards to the digital pillar and reached very different results compared with the previous assessments. A close look revealed that different policy areas have different political dynamics. This is further exacerbated by the increasing complexity of the EP’s political dynamics caused by the EPP’s and S&D’s loss of a combined voting majority during the 2019 European elections. As a consequence of this, EP majorities have become smaller and more fragile, and coalitions are increasingly being made on an issue-by-issue basis. The increase in issue-by-issue decision-making in the European Parliament demands careful research, as this also means that the influencers and king-makers are different parties and individual MEPs from one policy area to another.

The Commission is now in the midst of preparing the long-awaited Digital Services Act which will regulate how online platforms deal with harmful content and their own monopolistic positions. Some of the salient sub-topics addressed here are the roll-out of 5G, new technologies (such as artificial intelligence), and disinformation.

For its part, the European Parliament is displaying its preparedness to legislate by unveiling its new special committees: on artificial intelligence and the digital era, and on foreign interference in democratic processes and disinformation. VoteWatch methodology has forecast which MEPs are likely to take part in these special committees before the lists were published (as a private service). Given that we are merely at the beginning of the legislative cycle, at this point in time the professional background and the political networks are among the most important indicators of potential influence. However, later on, we will see in which cases this will be transposed into actual influence on shaping dossiers. In some cases, as we advance towards the middle of the legislative cycle, other influencers also emerge, reason for which it is useful to keep an eye on the bigger picture. To read the full methodology, click here.

1) The research below does not include the views of the MEPs, i.e. the directions in which they are likely to push and pull EU legislation. To find out those, contact us at [email protected]

2) Always keep in mind that while individual MEPs are the visible signatories of initiatives or amendments, in reality, their views are shaped (and their margins of maneuver are limited) by bigger political and societal forces that converge when policy-making is done. Ignoring those forces can lead to surprises, so make sure you don’t just look at the visible MEPs, who are just the tip of the iceberg, but also look at their colleagues, networks and other stakeholders surrounding them, i.e. keep in mind that 90% of the iceberg is “below the sea level”. Feel free to contact us to learn more.

1) Spanish EPP member Pilar del Castillo Vera is the most influential MEP in the EU’s digital transition. The Spanish MEP leads the main networks regarding the digital pillar. She is the Chair of the Internet Forum and Co-Chair of the Artificial Intelligence and Digital Intergroup. Recently, she also became a member of the new EP special committee on artificial intelligence. In the past, she has been a rapporteur on several digital dossiers on cloud computing in Europe, open internet access, a digital agenda for Europe, European Electronic Communications Code, and the Telecoms Package. Pilar del Castillo also worked on the report concerning the Digital Europe programme for 2021–2027.

The EPP currently ends up on the losing side of votes on digital policy votes more often than the other centrist forces. However, the fact that some EPP MEPs are in influential positions will help the centre-right group recover some of the lost ground. Castillo Vera’s national party, Partido Popular, is currently in opposition back in Spain.

2) The second most influential MEP in the digital pillar is Eva Kaili, Greek member of S&D. Kaili is the founder of the Future Forum in Brussels, the Chair of the EP’s Science and Technology Options Assessment (STOA) and Vice-Chair of the Artificial Intelligence and Digital Intergroup. Kaili is a member of the ITRE committee, and in the past, she has been a rapporteur on dossiers related to distributed ledger technologies and blockchains.

Her party is part of the Movement for Change alliance in Greece which managed to secure the third-largest share of parliamentary seats in the country’s 2019 elections and is currently in opposition.

3) Axel Voss, German member of EPP and CDU, is the third most influential MEP in the digital pillar. Voss is currently the rapporteur on the dossier on the civil liability regime for artificial intelligence. In the past, he has led multiple influential policy files such as copyright in the digital single market, the Digital Content Directive, and e-privacy & personal data protection in the EU. The German MEP also coordinates the position of the EPP in the Committee on Legal Affairs. Voss is a member of the new special committee on artificial intelligence, as well as of the main informal networks related to this policy area (Internet Forum, Artificial Intelligence and Digital Intergroup).

Similarly to Pilar del Castillo Vera, Voss will likewise prove valuable to the EPP group as he is in a position to reverse the fortunes of the group in the digital pillar. Besides being one of the most influential MEPs in the digital pillar, his national party (CDU) wields considerable influence both at home (being in government) and within the EP (being one of the largest national delegations).

4) Tiemo Wölken, a German member of S&D, holds the fourth position in this influence assessment. He is the rapporteur on the Digital Services Act report that aims to adapt the Union’s legal framework to the new realities in the digital economy, and one of the shadow rapporteurs on the report on intellectual property rights in artificial intelligence technologies. This MEP also coordinates his centre-left group in the Legal Affairs Committee.

Wölken is the Vice-Chair of the Intergroup on Artificial Intelligence and Digital, member of the Internet Forum and of the EP’s Science and Technology Options Assessment (STOA).

5) The fifth most influential MEP is Dan Nica, a Romanian member of S&D. Nica is the coordinator of the centre-left group in the ITRE committee. He is also a member of the new EP special committee on artificial intelligence and of the Internet Forum. Besides his network, Dan Nica made the top 5 because of his background. He has a long experience in communication sciences (also holding a PhD in this field) and has been a Minister of Communications and Information Technology before being elected to the European Parliament in 2014.

Nica is the head of the Romanian Social-Democratic Party in the European Parliament. Before the party lost a no-confidence vote and was forced into opposition, he was his government’s second proposal for the Commissioner for Transport position.

On average, S&D members are the most influential in this policy area  (compared to the members of the other groups). This is not particularly surprising since three S&D members are featured in our list of top 5 most influential MEPs. However, it is more interesting to notice that, despite the high level of influence exerted by the likes of Pillar de Castillo Vera and Axel Voss, EPP members are, on average, trailing behind most political groups, outperforming only the members of ECR, IDG, and the un-affiliated MEPs.

The EPP coalition-building potential in this policy area has decreased considerably during this term. As we projected before the 2019 European elections, the previous majority that opposed more digital regulation has shrunk to a large minority, which explains why  EPP ends up more frequently on the minority side in this policy area.

Compared to the distribution of political influence with regards to the Green Deal pillar, where differences were observed at the macro-level (i.e. East vs. West), the digital pillar reveals a very different picture. Representatives from small countries like Malta and two of the Baltics (Estonia and Latvia) punch way above their size, and so do those of average-sized Romania. This mirrors, to some extent, the quicker pace of digital transformation in these parts of Europe, e.g. Estonians are way ahead in digitalisation of the public administration, while Romanians enjoy the fastest internet speed in the EU. Additionally, many of the tech multinationals are outsourcing production to these countries. This seems to provide the MEPs representing these constituencies with first-hand expertise, which helps them develop an edge in the EP.

Regarding the largest Member States, we observed a stark contrast between Spain, on the one hand, and Italy, on the other hand. This is part of a broader trend of increasing Spanish influence (especially within S&D) and fading Italian one. Interestingly, German MEPs are on average more influential than the MEPs from other France, Italy, and Poland (this was already visible by the presence of two German MEPs – from two different parties – in the top 5). Among the Germans, CDU/CSU members tend to fare rather well, showing that the members of the most influential party at the EU level are well aware of the strategic importance of the digital transition. Conversely, while French Renew Europe MEPs have been seen as rather active on environmental matters (in particular Canfin and Karleskind), Macron’s MEPs seem to be lagging behind when it comes to shaping the digital transition.