Home Votewatch » Influence Index 2020: Most Influential MEPs on the “European Way of Life” 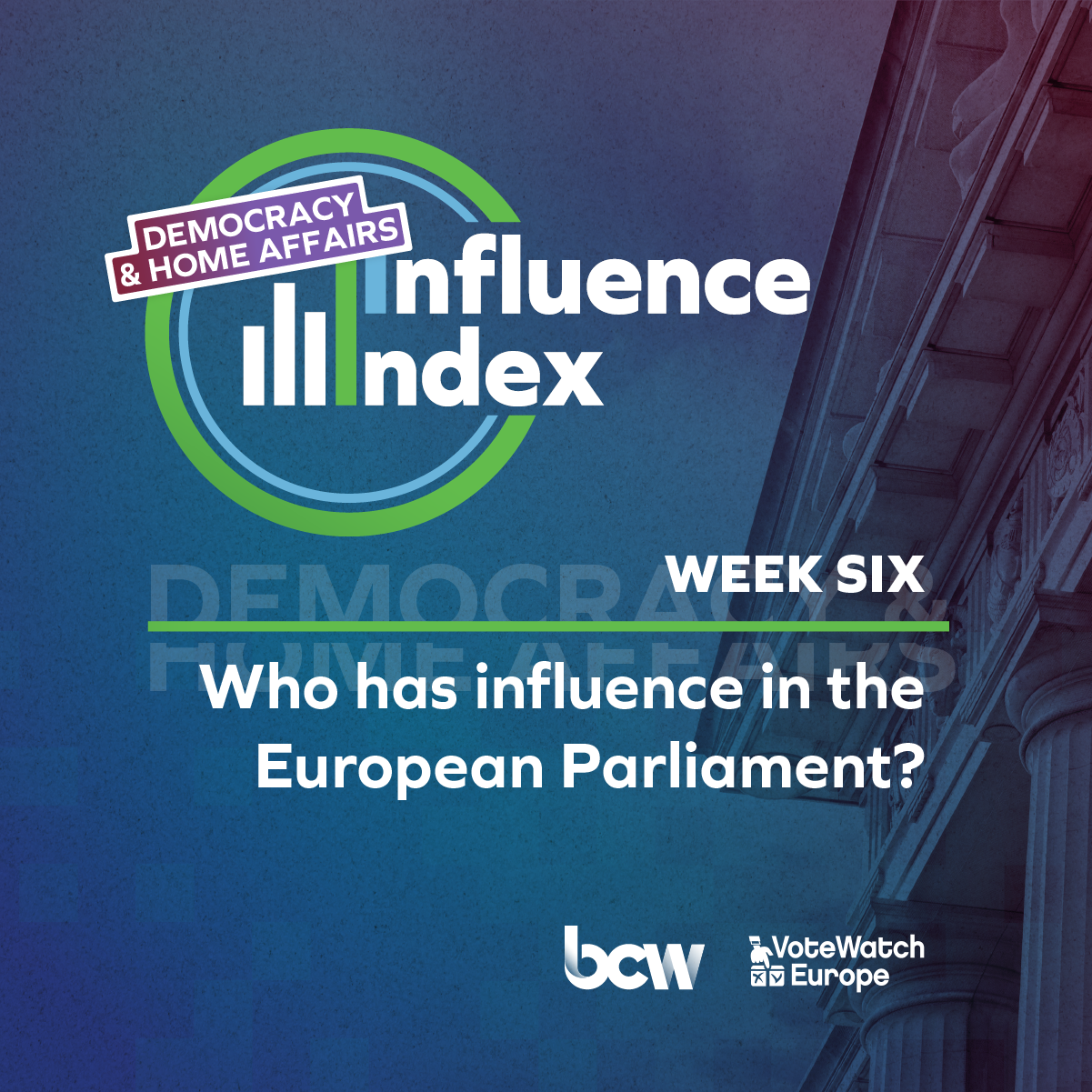 The following report sheds light on the top MEPs by political influence on the “European Way of Life”. The full results are available on the dedicated website.

We end our summer series of assessments of the influence of MEPs by looking at who is shaping the policies related to the so-called “European Way of Life” pillar. This has been, by most measures, the most controversial, or some would say “emotional”, policy area over the past few years. If not for the actual policy, its title surely received a lot of flak in the beginning (but it appears that the Brussels bubble got used with the phrasing).

VoteWatch has already covered health policy, the Green Deal, digital policy, the economy, and foreign affairs. Stay tuned for the overall influence assessment of MEPs that will be released in September.

The “European Way of Life” is a dense pillar. It comprises civil liberties, rule of law and migration (covered mostly by the LIBE committee), as well as gender policies (FEMM committee), the Conference on the Future of Europe and other institutional matters (AFCO and PETI committees). The latter issues are part of the “Democracy and Demography” pillar, which we decided to include in this assessment because of its smaller scope. All these topics are hugely important, which can be seen in the frequency with which MEPs vote and debate on various facets of these issues, as they are used as leverage on other policy areas – most importantly, on the EU budget. For instance, one of the main criticisms of the EP regarding the budget deal struck by the Council is that it did not include a sufficiently strong rule of mechanism. This interlink can also be seen in the current debate on whether EU funds should not be directed to entities that fall foul of EU values.

The main development in the European Parliament regarding the “European way of life” is that the balance of power has shifted significantly to the left after the elections last year. While it is not the purpose of this influence assessment to investigate the direction of policy influence, in this case, such direction seems to coincide with the concentration of political influence.

This report provides the results of our objective and data-based potential of political influence (based on MEPs formal and informal leadership positions, committee membership, professional background and the actual legislative work, among others; to read the full methodology, click here).

For more information on the direction in which policymaking is shaped by the most influential MEPs, feel free to contact us at [email protected] or +3223181188.

1) Spanish Juan Fernando López Aguilar has currently the most potential of political influence regarding the Commission’s “European Way of life” pillar. López Aguilar is serving his third term with the S&D group and is a key member of the PSOE party, which is currently governing Spain alongside Podemos. His main sources of influence are his leadership of the LIBE committee and his legislative work. For example, he drafted reports on automated data exchange, human trafficking and sea and rescue operation in the Mediterranean.

Before becoming an MEP, López Aguilar was a constitutional law professor at the University of Las Palmas de Gran Canaria and a member of the Spanish Parliament. As an MEP, he was a member of the special committee on Organised Crime, Corruption and Money Laundering and of the committee of inquiry into Money Laundering, Tax Avoidance and Tax Evasion. Currently, he is a member of the LGBTI intergroup, vice-chair of the Anti-Corruption intergroup and of the Anti-Semitism working group. López Aguilar is in a somewhat unique position of political influence as his national party is in government and one of its members is leading the centre-left group.

2) The second most politically influential MEP is the EPP member Roberta Metsola, who is the coordinator of the LIBE on behalf of her group. Metsola is the co-chair of the Anti-Corruption intergroup and a member of the intergroups on anti-Racism, LGBTI, diversity and children’s rights. The Maltese MEP is the rapporteur on dossiers aimed at cooperation on combating cross-border crime and terrorism and has drafted dossiers on FADO (False and Authentic Documents Online), Frontex and the European Border and Coast Guard. Her role on these topics is rather important, considering the delicate position of Malta is one of the main entry points for asylum seekers coming from North-Africa. Previously, Metsola was one of the vice-chairs of the PETI committee, which also deals with the transparency of EU institutions.

3) Third-term German Birgit Sippel occupies the third position in this influence assessment. As an experienced member of one of the largest parties within S&D, German SPD (currently in government in Germany), Sippel was assigned the task to coordinate the position of her group within the LIBE committee. Moreover, this MEP has worked on most topics concerning this pillar, including data protection and privacy, asylum policy and, more recently, judiciary and criminal matters – focusing on (electronic) evidence for legal proceedings. Sippel is a member of the LGBTI intergroup and, during the previous term, she was a member of the special committee on terrorism.

4) Dutch Sophia in ‘t Veld is the fourth most politically influential MEP regarding “European way of life” matters. She is currently serving her fourth term in the EP, and is the coordinator of Renew within LIBE. Since 2018, she has chaired the Rule of Law monitoring group within LIBE. Currently, she co-chairs the European Parliament Platform for Secularism in Politics, co-chairs “MEPs for Sexual and Reproductive Rights” and is the vice-chair of the LBGTI intergroup. The Dutch MEP has also worked on legislation to improve the gender balance in the Commission, protect passenger privacy and data exchange, establish an EU mechanism for the rule of law and strengthen counter-terrorism efforts.

5) French Pascal Durand is currently the fifth most politically influential MEP regarding “European Way of Life” policy. This MEP is the coordinator of Renew Europe within AFCO (Constitutional Affairs). Importantly, Durand worked on a dossier that aimed to strengthen transparency in the European Commission. Before joining the centrist group, he was vice-chair of Greens/EFA. Currently, he is active in several intergroups (such as Anti-Corruption and Children’s Rights). In the past, he was a member of the committee of inquiry into Money Laundering, Tax Avoidance and Tax Evasion.

In stark contrast to the influence assessment published last week, MEPs from Greens/EFA have the highest average political influence on the “European Way of Life” and Democracy pillars, followed by Renew and S&D members, with the EPP MEPs trailing behind. This distribution of influence can also be observed in the voting outcomes of the current legislature, with the centre-to-the-left coalition having a somewhat comfortable majority to forward its agenda. VoteWatch has observed this development earlier: the centre-to-the-left coalition has gained strength because of the 2019 electoral gains of the Greens/EFA and the leftward tilt of the Renew Europe group. This political dynamic, without being too dramatic, has decreased the EPP’s chances of successful coalition-making on migration, rule of law and other related topics (hence, its relatively lower political influence).

However, even if the centre-to-the left coalition has the majority in the EP, the balance of power is quite different in the Council, where EPP parties and other conservative forces govern most of the CEE region. This explains why legislation that is supported by most MEPs is often watered-down in the Council or, worse, it is put on hold. It is no secret that the winning majority of the EP does not see eye to eye with conservative national governments, especially on rule of law, migration and gender policies, but also on the EU budget (for instance, at the beginning of the term, MEPs were asking for a substantially bigger EU budget).

The six MEPs from Malta are, on average, the most influential on the “European Way of Life” pillar, which is due to some extent to their country’s forefront migration position. The Maltese are followed by MEPs from Spain, the Benelux countries, Germany and Ireland. Differently from the previous sectorial assessments, French and Italian MEPs do not trail the ranking, showing a stronger involvement in these topics (usually these national groups are close to the bottom because of their large delegations within the ID group, which are isolated in the EP and therefore struggle to be influential).

A West-East divide is noticeable in the “European Way of Life” pillar, which is to some extent due to the distribution of political groups in the EU – the centre-to-the-left European political groups invest more political energy and capital in issues related to this pillar and are substantially more “present” in Western Europe.

Click here for more detailed information on the methodology for the assessment of political influence.