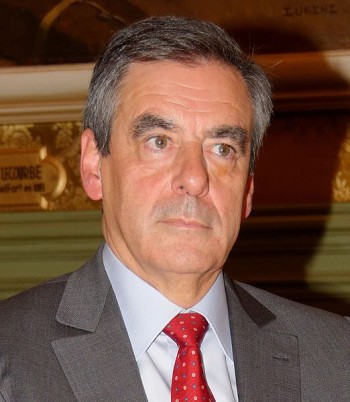 by Doru Frantescu and Awenig Marie, with thanks to Davide Ferrari

This is a time of deep political uncertainty in most of the EU’s member states. The British are still to decide their link to Europe, Italians have just ousted their PM, Spaniards are experiencing the hurdles of their first coalition government after prolonged stalemate, while the Polish are redrawing the roles of their own institutions away from Europe. To add to this, France and Germany are preparing for the drama of their own elections.

Against this background, the “surprise” winner of the conservatives’ nomination in France, François Fillon, proposes radical changes to Hollande’s policies. Fillon has won with a protectionist, intergovernmentalist platform. However, in order to assess to what extent his agenda can become actual policy in Europe, we have to take a look at the level of support that each of his proposals enjoys among key party members. To do so, we have compared Fillon’s policy orientations with those of his own Republicans, as expressed in the European Parliament.

This article shows what the actual agenda of Fillon is likely to be in Europe, if elected President.

Former Prime Minister, 62, has won the primary race with 67 percent of the votes, against Alain Juppé, another former PM. During the campaign, Fillon has defended a tough line on French national identity and promoted conservatives and value-based themes. The admirer of former British PM Margaret Thatcher is a clear favourite to win the presidency in May 2017, as the Socialist Party is still to recover from Hollande’s popularity plunge: according to recent opinion polls[1], Fillon is likely to be elected president next year, no matter who is the Socialist Party’s candidate. A victory would spearhead a return of the centre-right political party The Republicans to power, after a five-year period in opposition, and would change the political agenda in France. During the campaign, the liberal-conservative candidate close to Christian values has called for a reform of labour rules. If elected, he plans to cut 500,000 public sector jobs over five years and to reduce corporate tax.

As for Europe, there is no doubt that Fillon, who is not eurosceptic, favours an intergovernmental European union (EU), also given the rising pressure exerted by his most popular challenger, the nationalist Marine le Pen. In his campaign programme, Fillon pleads for a “sovereign France in a Europe respectful of nations”. As such, the former PM of Nicolas Sarkozy PM aims to limit the European Commission’s power and to strengthen the Council. With a pragmatic and not-federalist approach, the centre-right candidate for French presidency wants[2] to “put aside the dream of a federal Europe” and “re-establish a more politically-functioning” EU.

François Fillon has three priorities for Europe: to guarantee security, to boost investment and to reform the Eurozone. For the first one, the French Republicans’ candidate wants to reinforce controls of EU external borders and push forward a stronger European common defence. For the second priority, while he favours more investments at the European level, the centre-right candidate has also called for a more protectionist trade policy and an end to the TTIP (EU-US) trade talks. As regards the third, Fillon would like to see a more integrated Eurozone, with the creation of both a general secretariat and a council of Eurozone’s finance ministers, as well as the pooling of EU member states’ public debt. In addition to these priorities, his relation with Russian President Vladimir Putin and his opposition to EU economic sanctions against Russia raise concerns for other Europeans.

What do Fillon’s Members of the European think about this proposals?

The agenda for Europe of the likely next resident of the Élysée Palace will be influenced to a certain extent by, and coordinated with, his representatives in the European Parliament. For this reason, we have looked at how they voted on key issues debated recently in this institution, such as the European defence union, the increase of Frontex’s budget, the relation with Russia, trade policy, the establishment of a mechanism for the relocation of asylum-seekers, and the Juncker investment plan.

Although a majority of Republicans MEPs have explicitly supported Fillon during the campaign (11 out of 20), the correlation between MEPs’ and Fillon’s positions is not automatic. Indeed, MEPs have a relatively big degree of independence and their position can drift away from that of their national counterparts as a result of compromises achieved within the European Parliament.

The infographic shows the way French Republicans MEPs have voted, the line of their political group (the European People’s Party) and the way François Fillon would have positioned itself on these issues. The position of the Republicans’ logo represents the average vote of the group of MEPs from this party: the closer it is to the red zone, the higher the disagreement, the closer it is to the green zone, the higher the agreement. 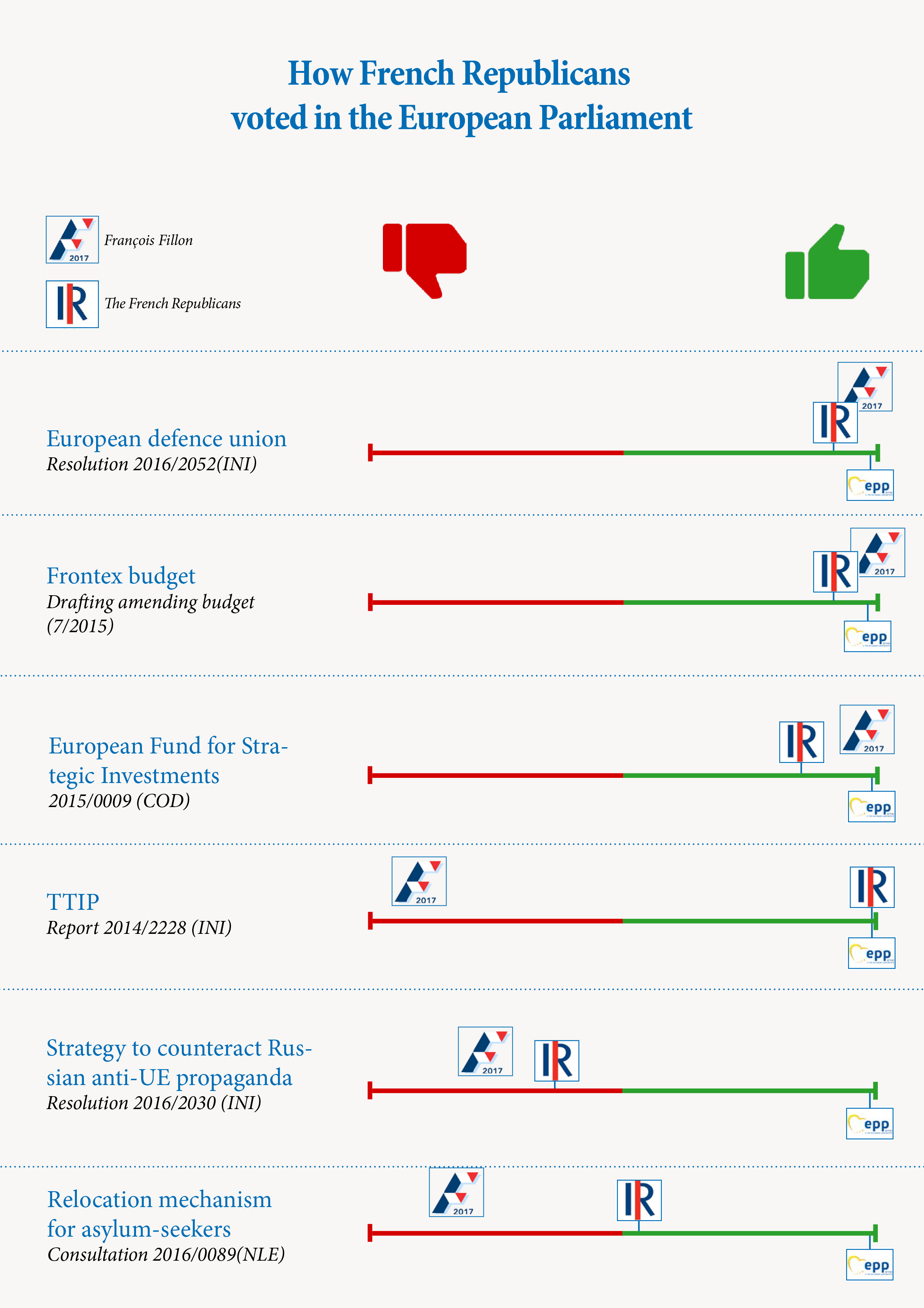 As shown by the infographic, there are three types of situations. Firstly, on topics such as European defence union, the Frontex’s budget, and European investment, the Republicans’ MEPs, François Fillon, and the EPP, are perfectly aligned. If Fillon gets elected in May 2017, this would not change but reinforce current political support towards more investment in Europe and a better integrated common defence. It would not be a problem for next French president to work and cooperate with MEPs from the French Republicans, the EPP, and even with a part of the centre-left Socialists and Democrats (S&D), who are also supportive of these issues. The question is, however, what will be the relationship between Fillon and the European Commission, ie. to what extent will he be comfortable with granting the EU the powers to manage the big European projects.

On the other hand, when it comes to EU-US and EU-Russia relations, Fillon’s political line is somewhat more radical. While his MEPs voted in favour of Transatlantic Trade and Investment Partnership (TTIP) negotiations, the French Republicans’ candidate has called for an end to EU-US trade talks and favours a protectionist trade policy. The anticipated trend is that François Fillon will try to push forward a protectionist agenda in Europe, which puts him on the collision course with the Commission and majorities in both the EP and the Council, who are currently favourable to opening international trade.

Concerning relations with Russia, the French Republicans’ MEPs are more divided. Only 15 out of 20 voted for the 2015 report on the state of EU-Russia relations and some of them even signed an open letter for lifting EU economic sanctions[3]. It seems that Fillon’s pro-Russia strategy, which worries German Chancellor Angela Merkel, would be supported by some of the French Republicans’ MEPs.  The victory of FIllon might also play a role in strengthening the pro-Russian attitude of French Republicans. In fact, when the EP recently voted on a report calling for additional measures to counter anti-EU propaganda by Russia, only one Republican MEP voted in favour of the initiative, whereas all the other French members of the EPP either voted against it or abstained.

Finally, on immigration policies, Fillon’s approach has the backing of French Republican MEPs, even against the views of a majority of their EPP colleagues. Even though the centre-right candidate for French presidency is in favour of common standards for the reception of asylum-seekers, he has a strong preference for an intergovernmental approach and rejects interference from the European Commission. At the peak of the debate in 2015, only six French Republicans MEP’s voted for the relocation mechanism proposed by the Commission, two voted against, two abstained, and ten did not vote. Notably, the majority of French Republican did not follow the EPP line, so they are highly likely to back Fillon against the Commission on this subject matter.

Also read Who are most influential French Members of the European Parliament?

To sum up, if Fillon is elected as French President, we can expect a reinforcement of the French support for the European investment plan and of the defence Union proposals. At the same time, we can expect more restrictive migration policies and a friendlier approach towards Russia. Fillon would also adopt a less trade-friendly policy agenda than the one it would have been expected under Juppé and Sakozy.