Home Votewatch » How will the new French President impact on EU’s future? (Report) 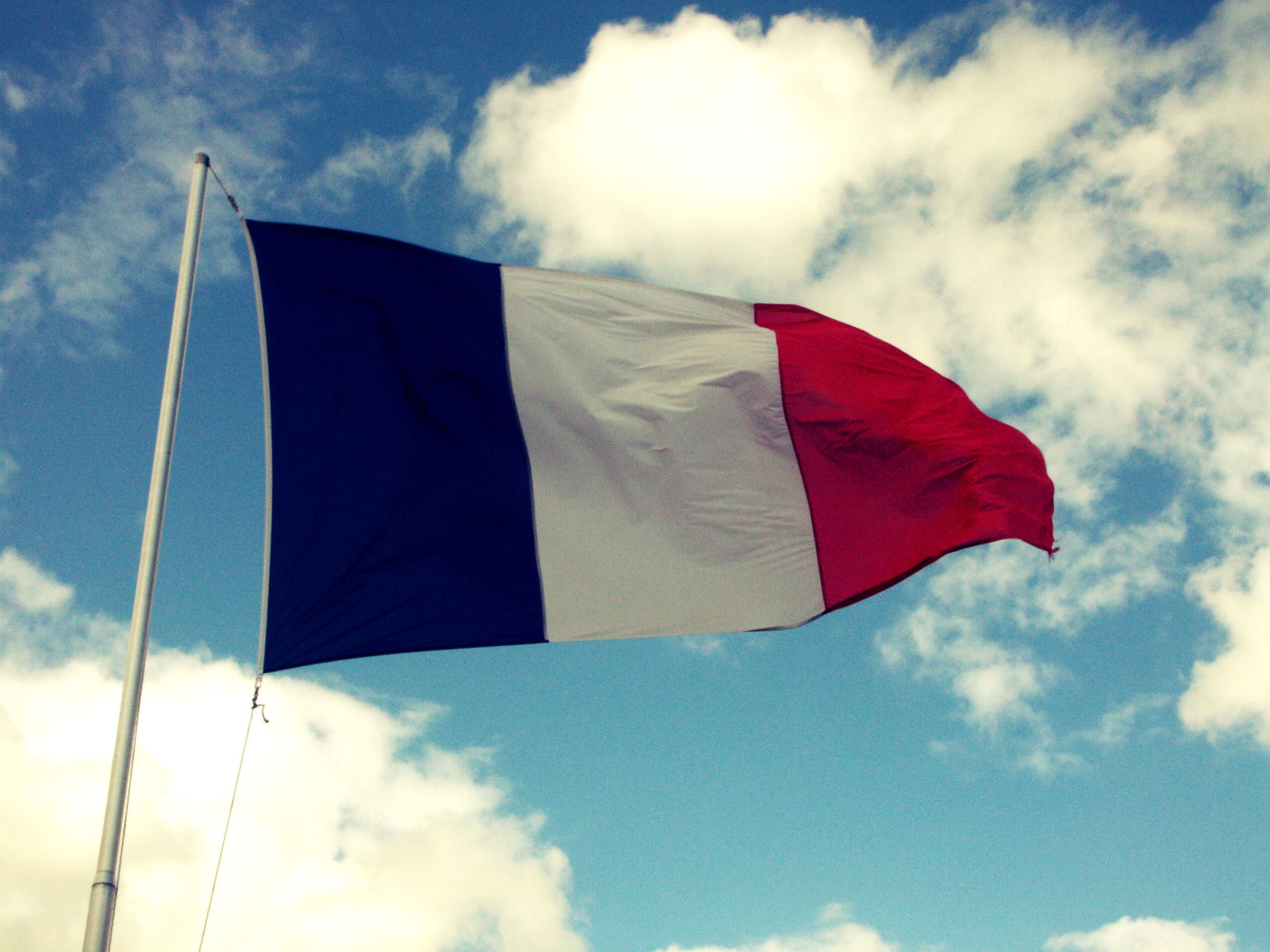 The two major traditional political families that have structured French politics in the past few decades are in their death throes. Neither the Socialist Party (social-democratic) nor the Republicans party (centre-right) are assured of being in the run-off. This development generates high unpredictability with regard to the policies of the next French government, at a time of deep distress for the EU. This report assesses the likeliest directions in which France can lead the EU depending on who wins these unprecedented Presidential elections.

In the latest polls, traditional parties’ candidates François Fillon (The Republicans) and Benoit Hamon (Socialist Party) are far behind the far-right and Eurosceptic candidate Marine Le Pen (National Front) as well as the outsider and former economy minister Emmanuel Macron, who created his own movement “On The Move” (En Marche). Fillon’s campaign has been tarnished by judicial investigation and Hamon is highly challenged by the far-left candidate Jean-Luc Mélenchon (Unsubmissive France).

After the Dutch and Bulgarian elections this month, the French presidential election will be decisive to determine the future of the European project (as also outlined by our updated report on the coalitions in the Council), as are other sensitive elections in Europe this year (Germany, Czechia and Italy). What can we expect from the next French President? Below we outline the actual views of the leading candidates on the basis of the positions taken by their French parties when representing France in the European institutions’ decision-making process. 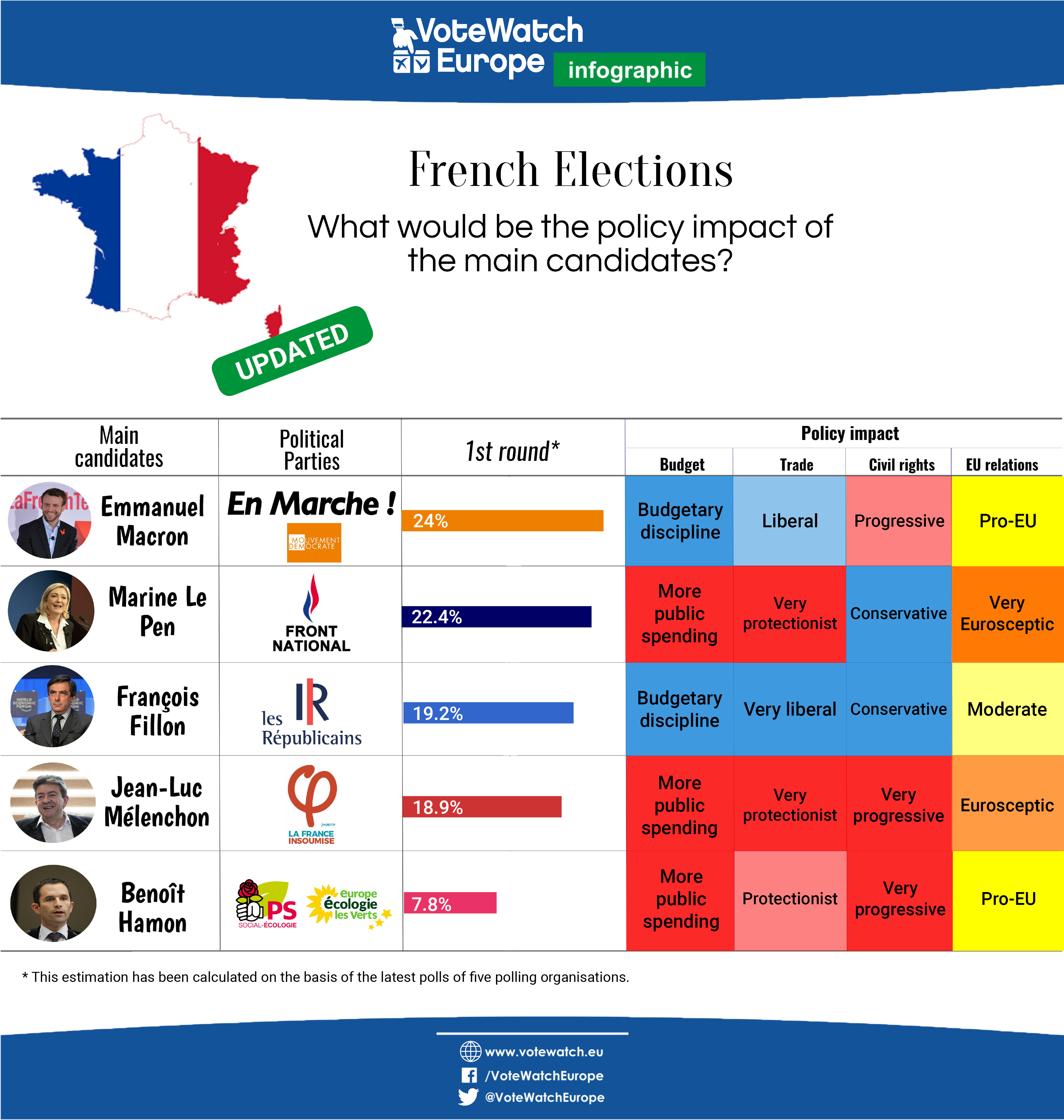 The infographic below provides a detailed analysis of the positions of the French parties in the European Parliament, based on how they actually voted (not mere statement) on key regulations and principles agreed upon at the EU level.

The newcomer centrist candidate Emmanuel Macron is, according to recent polls, the favourite in this race. He has rallied many high profile politicians from both the left and the right, all disappointed by the turn of events within Fillon’s campaign and Hamon’s radical leftist platform. Macron has insisted on his willingness to restore strong trust between France and Germany. His election on a centrist platform would, therefore, be welcomed by both Merkel’s Christian Democratic Union (CDU) and Schulz’s Social Democratic Party (SPD).

The former banker proposes a pro-EU liberal program. He wants to strengthen the banking union and the Eurozone governance. Like The Republicans’ candidate François Fillon, he wants to cut the French budget deficit below 3% of GDP, as required by EU budgetary rules. Similarly, his pro-EU platform calls for the creation of an EU military headquarters.

However, contrary to The Republicans’ candidate, Emmanuel Macron is a strong supporter of free trade. As a president, this position would be difficult to hold at home, considering that he would need to form a coalition with Parliamentarians potentially opposed to further trade liberalisation. In the EP, the majority of MEPs that officially support him voted against the EU-Canada trade agreement (CETA).

While François Fillon is quite conservative when it comes to civil rights, both for homosexual rights or  gestational surrogacy, the centrist front-runner tends to be more socially and culturally liberal. Similarly, on immigration issues, the centrist candidate has welcomed  Angela Merkel’s refugee policy and his supporters in the EP voted for the relocation scheme for asylum seekers.

The far-right candidate Marine Le Pen has long been ahead in the polls, but she is now overtaken by Emmanuel Macron. Yet, she is almost certain to be in the run-off on May 7. Nevertheless, there is only a small chance that the extreme-right candidate will be elected president, since centre-right and leftist political families have generally blocked any extreme-right candidates in previous elections. Although nothing can be taken for granted, either Macron or Fillon should defeat Le Pen in the run-off, unless something extraordinary happens in the interim.

A Le Pen Presidency would be strongly Eurosceptic, since she wants to recover full sovereignty on policies decided nowadays at the EU level (immigration, agriculture, fiscal and monetary). The extreme-right candidate wants to leave the Eurozone, although she has softened her position in the recent weeks in order to broaden her political base. Since no government would be willing to accept her European proposals, the National Front (FN) leader could call a referendum on the EU membership. In addition to stopping integration in defence, the election of Marine Le Pen could thus lead to the breakup of the EU as a whole, as one can hardly imagine an Union without France.

Marine Le Pen has an anti-establishment and anti-globalisation platform for the disenfranchised middle and lower-classes. In this context, she criticizes austerity measures, a point she agrees on with the far-left candidate Jean-Luc Mélenchon. On the question of the governmental debt, the extreme-right candidate was at first against any renegotiation, but has since changed her mind – notably, her political party abstained when voting in the EP.

Le Pen is openly opposed to immigration, be it legal or illegal. Her party voted against the relocation scheme for asylum seekers and she wants to reintroduce border controls between the Member States. On environmental issues, the far-right party tends to be close to the Republicans: both of them opposed ambitious targets for CO2 emissions and the suppression of fossil fuel subsidies.

Since the beginning of the investigation on the alleged “fake” parliamentary job of his wife and the financial ties to the Russian government, François Fillon has lost his position as a favourite. The Republicans’ candidate is placed third in polls, but still has a chance to be elected, considering the volatility of Macron’s electorate.

His platform on immigration is strict and has common features with  Marine Le Pen. The Republicans’ candidate advocates quotas, wants to reduce immigration to “the minimum,” and, at the European level, wants to temporarily exclude countries from the Schengen area if they fail to control EU’s external borders. The Republicans were strongly divided on the relocation scheme for asylum seekers, many of them abstaining.

As regards economic policies, the analysis of actual voting data shows that the liberal conservative candidate, if elected, would support a more integrated Eurozone, with the creation of a budgetary capacity, the establishment of a banking union and tax harmonisation at the EU level. Moreover, the Republicans reject government debt renegotiations, a point on which Fillon would agree on with German Chancellor Angela Merkel (if the latter is re-elected in September).

As highlighted in our previous report, Fillon favours a more protectionist trade policy. If elected, he will struggle to find allies at the European level, as the majority of governments and the European Commission are currently favourable to opening international trade, unlike most of the French political parties. Fillon’s Russia-friendly position would also put him on collision course with his European counterparts, especially Germany and the Baltic countries.

Due to a rather lively performance in the first televised debate, the far-left candidate Jean-Luc Mélenchon has overtaken the Socialist candidate Benoît Hamon in the latest polls. The 65-year-old former socialist and Minister of National Education (2000-2002) could achieve a surprising result in the first round of the election on April 23.

Jean-Luc Mélenchon, also a Member of the European Parliament, has rallied voters who have been disappointed by François Hollande’s presidency. On economic issues, his program is quite similar to the one of the Socialist Party candidate, with, for instance, the renegotiation of government debt in the most heavily indebted countries. On this very sensitive issue, the next German elections will be decisive.

The main issue of disagreement with the Socialist candidate is the EU. Mélenchon wants to leave European treaties, if not renegotiated. This is likely to happen if the far-left candidate is elected, considering that the other major Member States, especially Germany, will never meet the candidate’s demands.

On environmental issues, Melenchon supported  ambitious targets for CO2 emissions in the EP, but he is strongly opposed to more European integration on these issues, opposing the establishment of a European Energy Union. The far-left candidate, who is in favour of friendlier relations with Russia, frequently criticizes any loss of sovereignty for France. In this context, he wants France to leave NATO and voted against the creation of a European Defence Union.

The Socialist Party (PS) candidate is placed fifth in the latest polls and is caught between Mélenchon on his left and Macron on his right. After the primaries, Hamon has formed an alliance with the green party candidate, Yannick Jadot, who dropped from the presidential race.

The analysis of actual voting records data underlines that the two parties do often vote in the same way. Yet, the PS and Europe Ecology – The Greens (EELV) disagree on the establishment of a European Border and Coast Guard and the European Defence Union, where the ecologist party is more pacifist.

If elected president, which is, according to the polls, unlikely to happen, Hamon will hold a pro-EU position on economic policy. He favours, for instance, the creation of a democratic Eurozone assembly. In this way, he has put on the table a draft treaty, which could be blocked by Germany, especially if Merkel’s party Christian Democratic Union (CDU) remains in government in Berlin.

Unlike Fillon and Macron, the Socialist candidate aims at making EU budgetary rules more flexible. On environmental issues, Hamon holds an ambitious program, due to his alliance with the Green Party. The candidate advocates, for instance, to abandon nuclear energy, in a country where nuclear represents around 80% of total production (EU average is 28%).