The trade defense reform recently proposed by the European Commission is directly aiming at limiting Chinese exports to the EU, a creative way to avoid frontal collision with WTO regulations. This strategy has gained momentum especially after the Brexit referendum, as this is removing a key ally of China from the EU power game: the UK has been the most pro free-trade EU government and British leaders have fought, from inside the EU institutions, to block protectionist moves by the EU. With the British gone, French and Italian lobbies gain the upper hand, increasing the chances of application of strict trade defence instruments. The frequent meetings of European policymakers with their Chinese counterparts may hint at deeper cooperation, but their actions at EU level seem to indicate that these governments are using the EU as “the bad cop” in their strategy to contain the Asian power.

This report maps the positions of key influencers of the EU decisions, providing clues as to who is pushing for and against tightening of EU trade policy vis-à-vis China.

What are the EU’s trade defence instruments?

As a consequence of Chinese dumping practices on European steel markets, and in the aftermath of the debate on the economic status of China, the European Commission wants to adapt the EU’s trade defence instruments to a ‘new trading reality’. The Commission therefore planned to introduce other benchmarks when determining significant market distortions, in order to establish a more realistic view of the magnitude of dumping practices. The proposal also comprises the elimination of the distinction between market economies and non-market economies, which would be replaced by a differentiation between WTO members and non-WTO members. The analogue country methodology would cease to apply to WTO members currently classified as NMEs (e.g. China), but would continue to apply to non-WTO members.

The proposal does not replace, but rather complements the proposal on the Modernisation of Trade Defence Instruments (TDIs), adopted by the Commission in 2013.

It is all about China

Although China is not explicitly mentioned in the Commission’s proposal, this is all about current EU-China trade relations: on the 11th December 2016, article 15(a)(ii) of China’s accession to the WTO expired, and on 12 December 2016 China filed a complaint against the EU and the United States, arguing that the expiration of WTO article 15 (a) (ii) means that the trading partners must drop surrogate pricing.

In fact, the expiration of  article 15 (a) (ii) does not mean WTO member countries have a legal obligation to grant China market economy status, however, they have to review their anti-dumping defence strategies. This is exactly what the European Commission is currently planning.

In order to measure the political support for the new initiative proposed by the European Commission, we looked at some previous votes on whether stricter anti-dumping measures should be adopted to protect EU’s industrial production. Our previous report published last year already showed that the positions of the different European policymakers on trade defence are particularly important, as these policy discussions dramatically impact on EU relations with China.

Earlier in 2016, the European Parliament said “no” to granting market economy status (MES) to China. Later on, as a reaction to the closure of Caterpillar in Belgium and cutting down of jobs at Alstom in France, the European Parliament presented in October 2016 a resolution on the need for a reindustrialisation policy. In this respect, the Parliament called on the Commission to ensure a level playing field for market operators from inside and outside Europe, and MEPs asked for a swift agreement on the revision of the regulations on trade defence instruments.

S&D and the Greens proposed an amendment to this resolution, stressing that some third countries have barriers in place that discriminate against European companies and that China is expanding rapidly and aggressively into Europe and other parts of the world.

The amendment points out that China does not fulfil the five criteria established by the EU to define MES. 386 MEPs, or 57%, voted in favour of the amendment. Especially French (90%) and Italian MEPs (90%) endorsed it. 90% of the Polish MEPs voted against, whereas German and UK’s MEPs were split.

This is in line with their voting behaviour regarding the resolution on China’s economy status. Our analysis of the debates and votes of the EU parliamentarians from a national perspective showed that Italian and French MEPs are the most active and vocal in their opposition to granting MES to China.

Polish MEPs, on the other hand, have indeed shown a much more favourable stance. In the map below, we measured the relative positions of national delegations in the EP on granting MES to China. 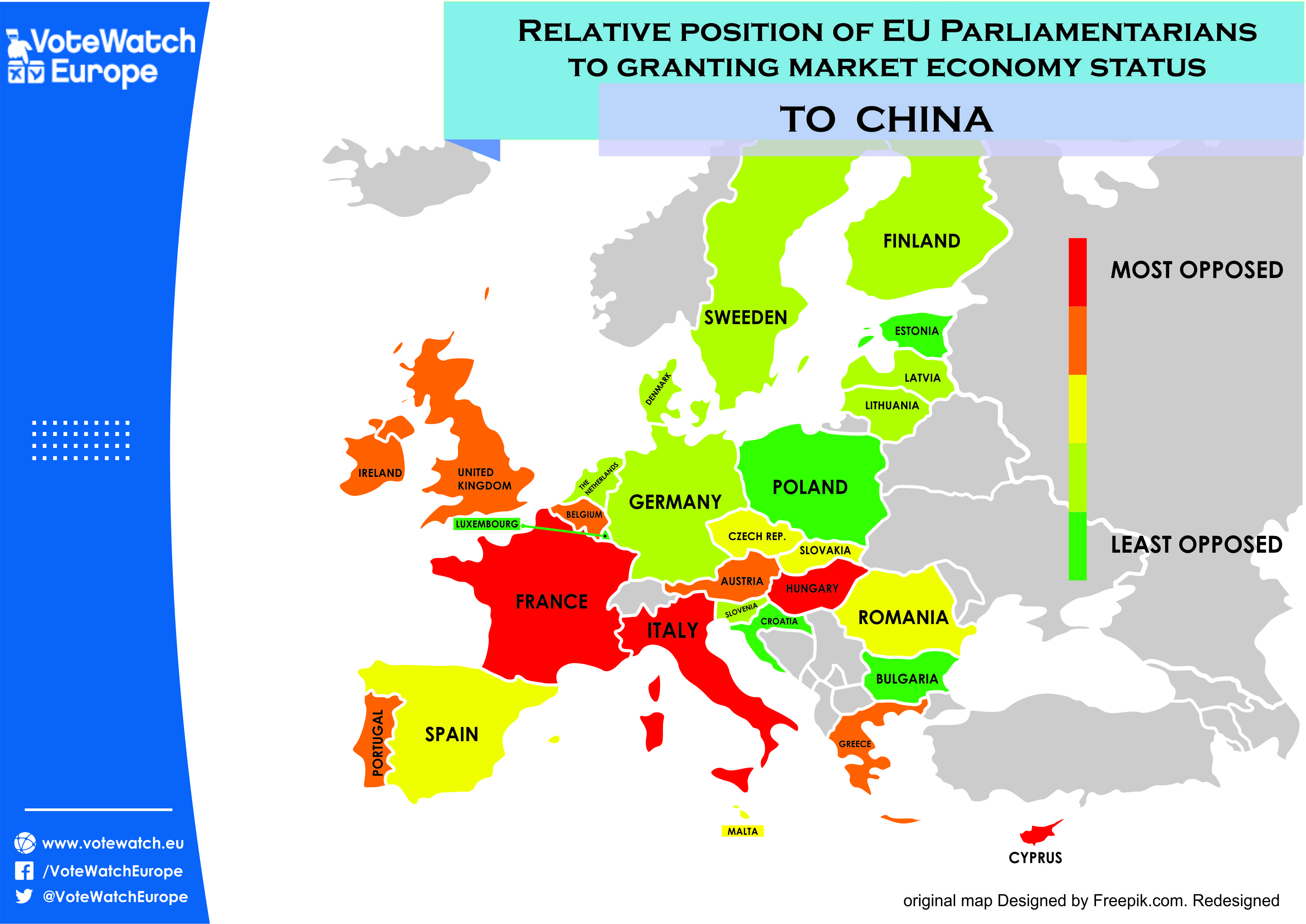 Regarding the UK, former PM Cameron embraced China with open arms. He said during a visit to China in 2013 the UK is far more progressive on trade than some other EU member countries and that Britain wants to tear down trade barriers with China. Nevertheless, the majority of British MEPs is relatively favorable to economic protectionism vis-a-vis China, as the Tories (who are free-market oriented) have less representatives in the EP than UKIP and the Labour Party (which tend to be more protectionist).

Therefore, Brexit will mostly weaken the free-trader coalition in the Council, whereas the impact will be way smaller in the European Parliament.

The position of Germany is more mixed. If, on the one hand German policymakers feel the pressure to protect their domestic industry, on the other hand, Angela Merkel reaffirmed her support for free trade in March this year. She also stated she would, together with China, fight for free trade and open markets.

As for the Belgians and the Dutch, the ports of Antwerp and Rotterdam play an important role for their trade relations with China. The appetite of Dutch politicians to oppose MES for China seems to be rather small, whereas the Belgians are less favourable to granting China this status.

It is particularly striking that the Flemish-nationalists of N-VA in the European Parliament, economically right-wing, agreed with the amendment to the resolution on reindustrialisation that rejects granting China MES. The four Belgian EPP members supported the amendment as well, despite their political group, the EPP, being opposed to the rejection. In fact, the only Belgians voting against the amendment were the Flemish liberals (Open Flemish Liberals and Democrats).

There were more dissident voices within the EPP: two of the three Juncker’s CSV party members voted in favour, as well as 15 of 20 French republicans and seven of 12 Forza Italia’s members in the European Parliament. 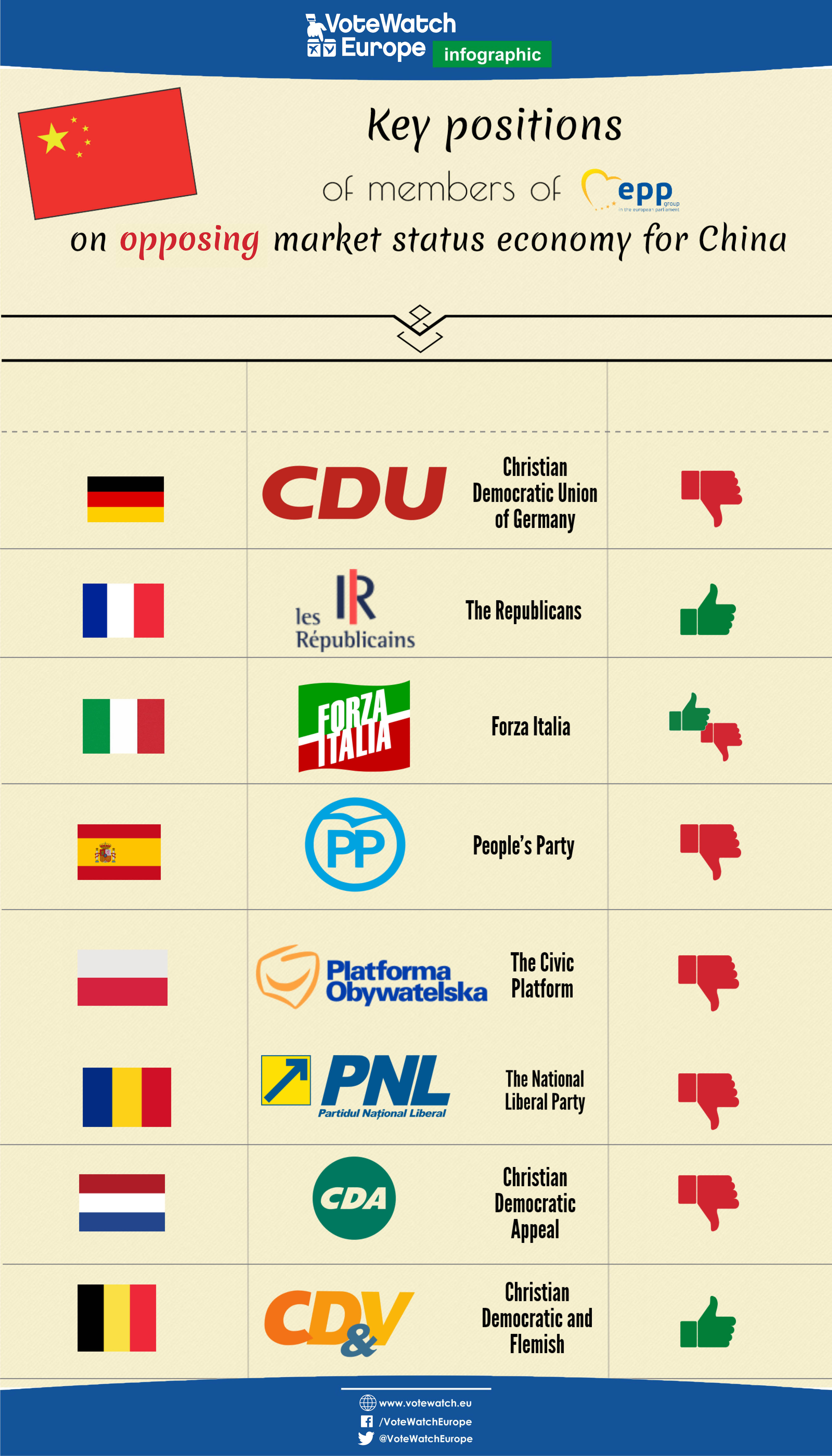 Changing attitude in the Council

The European Council of 20 and 21 October 2016 focused on the need to tackle unfair trade practices in an efficient and robust way: “it is of crucial importance that the EU’s trade defence instruments are effective in the face of global challenges”.

However, there have been concerns about the political will of Member States to approve the earlier proposed reform of the Trade Defence, as the proposal of the Commission (already amended by the European Parliament) was blocked in the Council for two years because of disagreements between the national governments. Nevertheless,  on 13 December 2016, the Council reached an agreement on the modernisation of trade defence instruments. This agreement is based on the earlier 2013 Commission’s proposal, aiming at more transparency, faster procedures and more effective enforcement in the context of unfair trade practices. The agreement was seen as ‘a major breakthrough,’ as the proposal was stuck in the Council for several years because of different trade traditions resulting in differing views on (higher) anti-dumping tariffs.

Momentum for the Commission?

With Brexit and changing positions with regard to trade defence in the European Parliament and the Member States, it seems the Commission grabbed the momentum to effectively reform the European Trade Defence System.

The proposal is now awaiting a committee decision in the European Parliament. The committee vote is scheduled for 20/06/2017.

For mapping of EU Parliamentarians’ and governments’ actual positions (based on actions undertaken in the EU decision-making process, not mere statements) or for impact analysis of Brexit, national elections and other key political events, contact us at [email protected].

About us: VoteWatch Europe is the think tank most followed by the Members of the European Parliament, according to an independent study. Our reports are also frequently quoted by European and international institutions and the world-wide media.