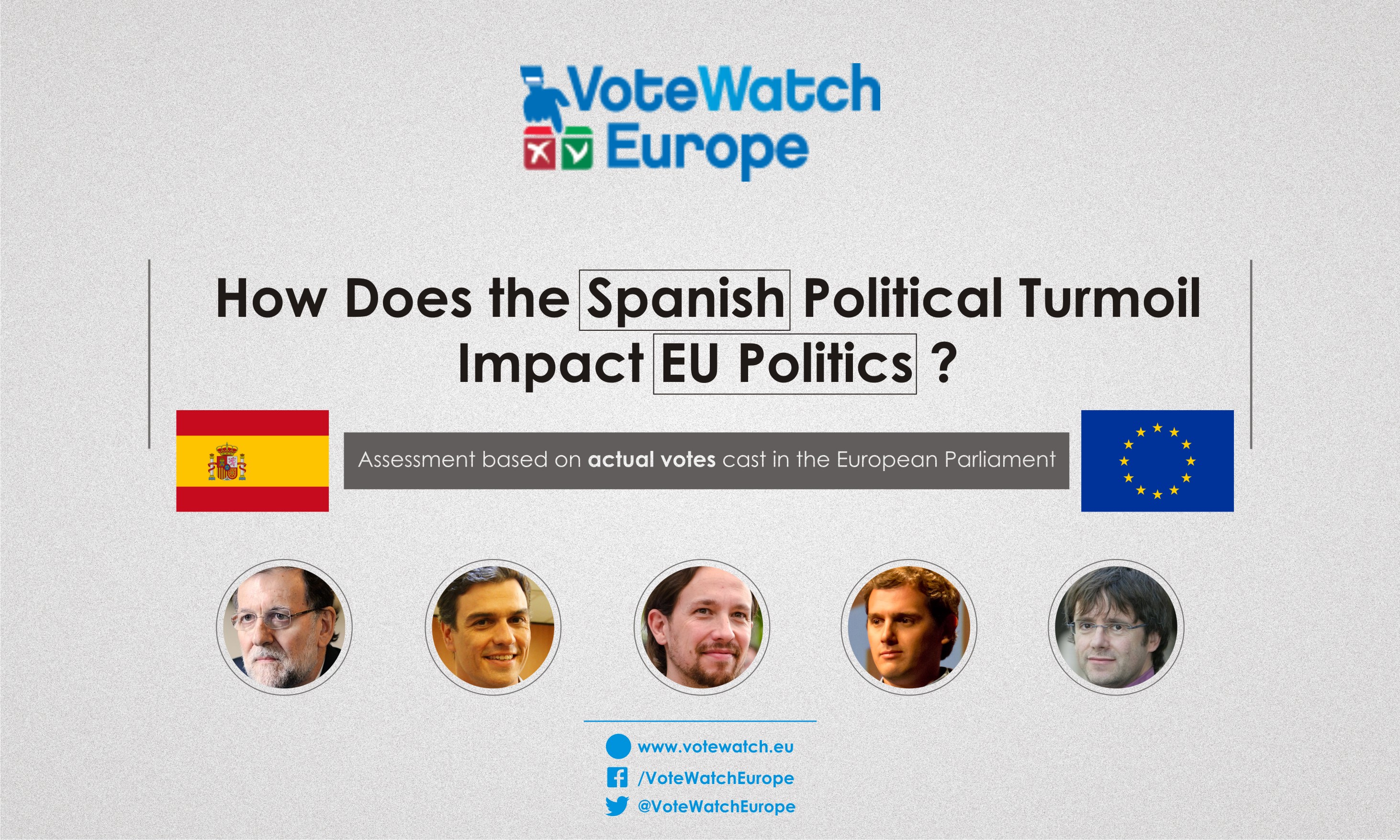 Things are moving in Spain. With the election of Pedro Sanchez as the new leader of the Spanish Socialist party (PSOE), a potential referendum on the independence of Catalonia in September and Spanish Government’s tight majority in the national Parliament, there are plenty of reasons to take a closer look at this country’s politics. Pedro Sanchez’ victory took place in an already unstable political setting and is likely to enhance polarisation in Spanish politics. Sanchez questions the current government and is known for his desire to take a sharp turn to the left. That is the same far left, mostly represented by Podemos, who recently called for a no-confidence vote against PM Rajoy. Meanwhile in Catalonia, independentist voices are claiming their right to hold a referendum.

All of this at a time when Spain plays hard ball with the UK over Gibraltar, a potential sticking point in the Brexit negotiations, and seeks to be at the forefront of further continental integration. How stable is the Spanish government and what are the implications of the shaky political environment in Madrid for the EU? We looked at how the Spanish parties have behaved when being part of the EU decision-making before and after the establishment of the second Rajoy government.

Please notice that our analysis is based upon actual decisions made by a selection of Spanish MEPs, not merely opinions or carefully crafted statements. If you have questions or you want to know more about this report, do not hesitate to contact us at [email protected].

Ciudadanos moved to the right over the last few months

Our data shows that cooperation between Ciudadanos and the People’s Party increased sharply in the European Parliament (EP) since they formed a coalition in Madrid. On the other side, we recorded widening divergences between the views of Rivera’s party and the ones of both PSOE and Podemos. This rightward trend mirrors the positioning of the party at home. Strikingly, although national parties vote alongside their European political groups line in the EP most of the times, we found that Ciudadanos has agreed more often with Rajoy’s party than with another member of its own European political group (ALDE), the Catalan European Democratic Party since last October. 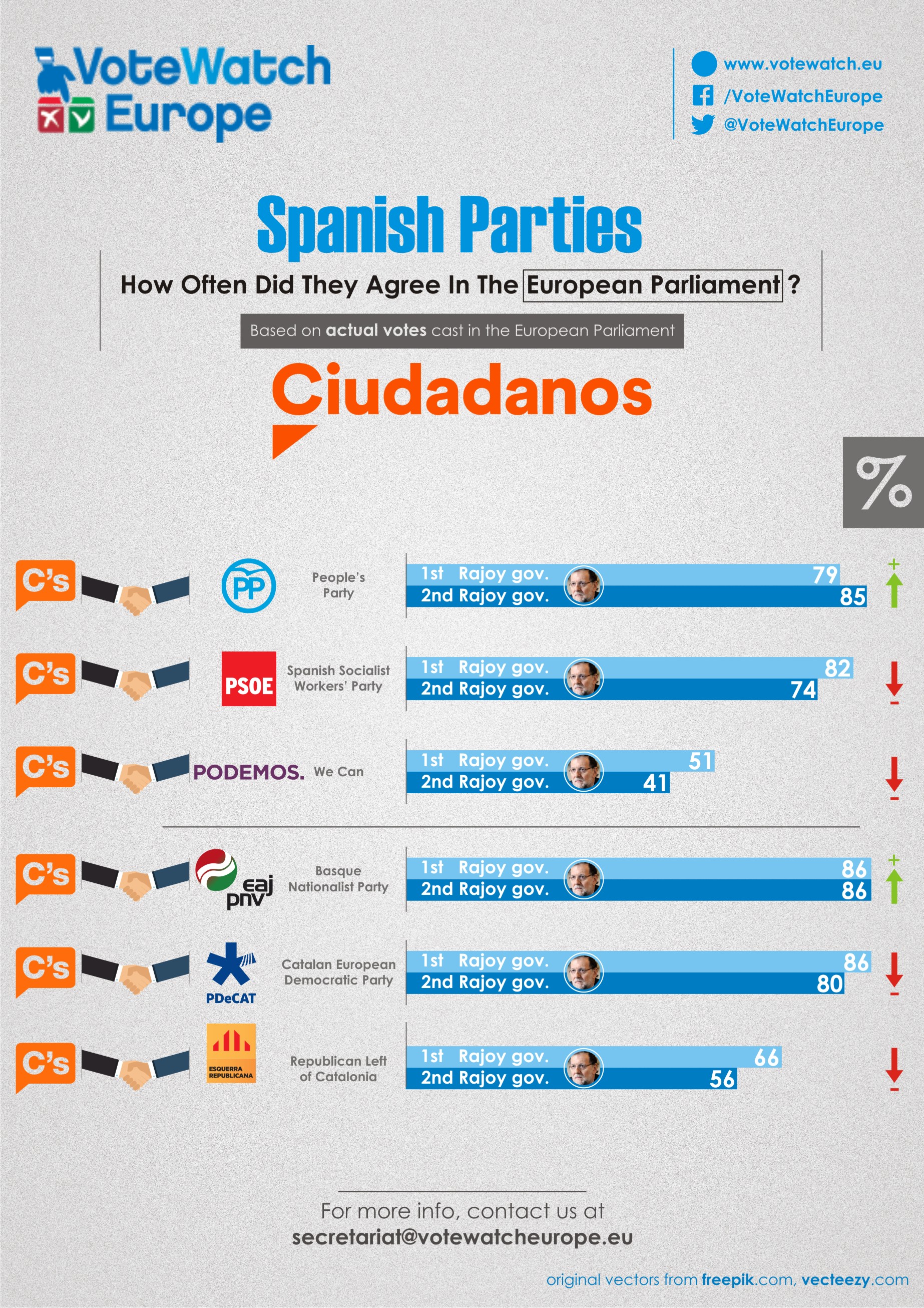 Increasing differences between the views of PSOE, Podemos and Ciudadanos

The trends regarding PSOE are more blurred. Interestingly, the Socialist party voted more frequently together with the People’s Party after the Rajoy II government was voted in with the benevolent abstention of PSOE in Madrid. For example, on the vote on CETA, PSOE agreed with PP, voting in favour, and not with Podemos, who opposed CETA. So far PSOE seems to have got closer to PP, in its attempt to distance itself from Podemos. However, the fresh victory of Sanchez within the party may turn this trend around.

However, the overall cooperation between PSOE and other Spanish parties has, so far, decreased. Overall, PSOE cooperated less with Ciudadanos and Podemos, or with Basque and Catalan regional parties over the last few months. This also reflects the current dilemma that the party is facing at home, where the different candidates for leadership of the party had completely opposite visions on the role of the party within the Spanish political spectrum. The impact of the come-back of Sanchez will require, therefore, careful scrutiny.

Finally, the party led by Rajoy seems to get closer to the centre in European politics, in its attempt to appease Ciudadanos, but also factions of the PSOE. The EU voting records show that both Ciudadanos and PSOE have increasingly agreed with PP in the EP since the Rajoy II government took over. On the other hand, the views of PP and Podemos are drifting further apart. Importantly, we also record increasing divergences between PP and the two largest Catalan parties. 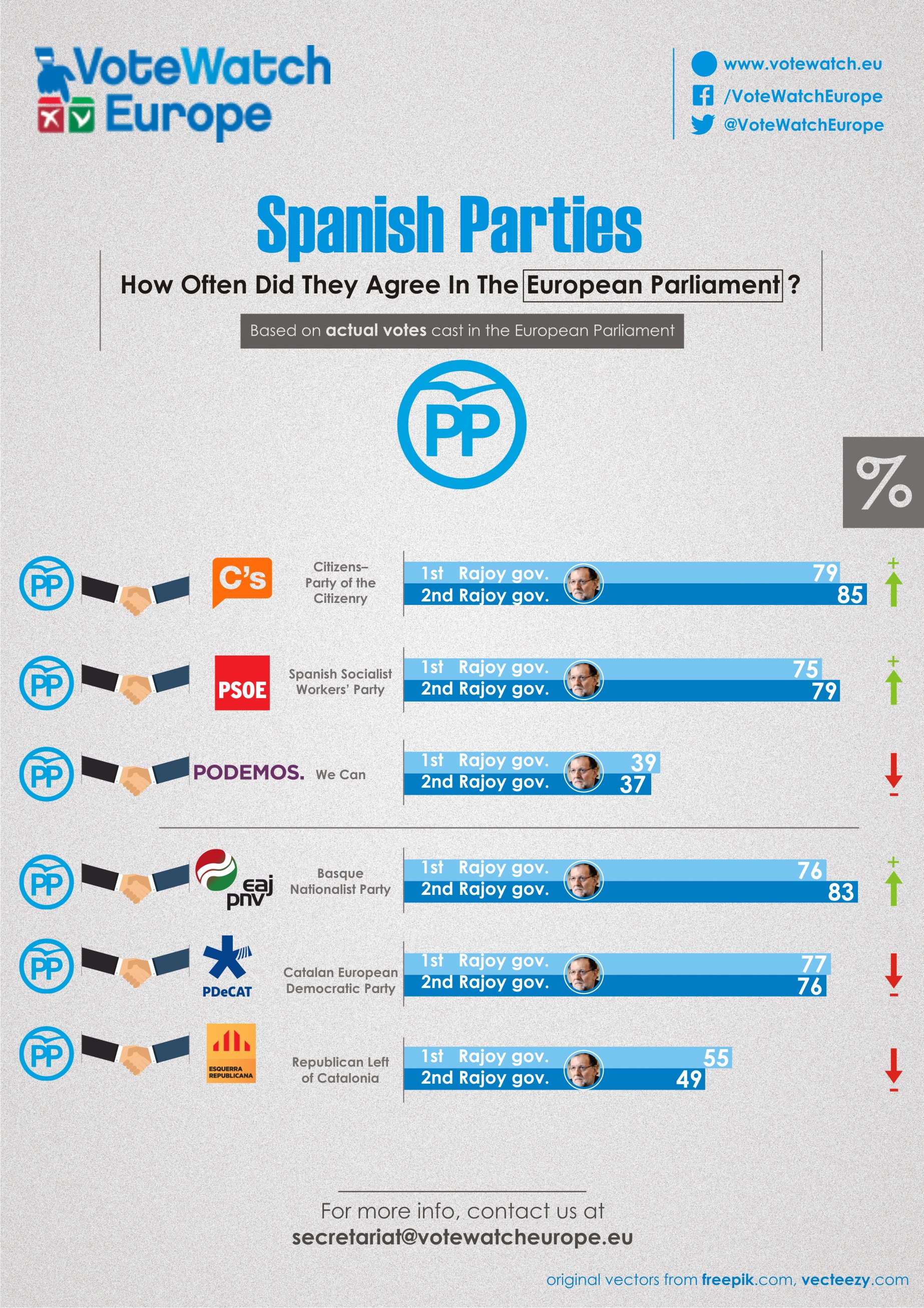 Cooperation between Catalan nationalists and Spanish parties in the EP is decreasing; but the opposite applies to Basque nationalists

The heated discussions on whether Catalonia should be allowed to hold a referendum on its independence from Spain are also influencing the behavior of the two Catalan parties currently governing the Autonomous Community: the Republican Left of Catalonia (ERC) and the Catalan European Democratic Party (PDeCAT), both advocating for Catalan independence. Since the establishment of the second Rajoy government, the differences between the views of the Catalan nationalist parties and the Spanish national counterparts have increased in the European Parliament.

This is particularly striking as the largest regional party from the Basque country, the Basque Nationalist Party (currently governing in Vitoria-Casteiz), is actually cooperating more with the Spanish government’s parties (C’s and PP) in the European Parliament than they did in the past. A clear example is the vote on an amendment stating that the Brexit negotiations “must not be used as a mandate to question the sovereignty of Gibraltar.” The Basque Nationalist Party voted against, which was in line with the position of the Spanish government parties, whereas the Catalan independentist parties PDeCAT and ERC voted in favour, undermining the Spanish position. MEPs Ramon Tremosa i Balcells (PDeCAT), Jordi Sole (ERC) and Josep-Maria Terricabras (ERC) were even the only ones of their political groups, ALDE and the Greens respectively, to vote in favour of this statement on Gibraltar.

While Madrid seeks to play a bigger role on the European scene, especially against the background of Brexit, its own political instability, possibly augmented by the reelection of Sanchez as PSOE leader and the radicalisation of the independentist movement in Catalonia, can undermine its efforts. We will keep monitoring the developments in Spain and their impact on the EU decision-making.

Also read Who are the most influential Spanish Members of the European Parliament?