This is another sign that things are moving. Decision-making in the Council has traditionally been seen as a process converging towards consensus, so that the final outcome satisfies everyone. However, Brexit and the discussions on the future of Europe do reveal that some differences between Member States are more difficult to reconcile than others.

The vote on how to address fraud against the EU budget has become a key sticking point, with some governments being less willing than others to support EU’s defence of its own financial interests. A decision on this particular legislative dossier passed with the tiniest qualified majority ever and against the opposition of two of the largest EU countries, Germany and Poland (while the UK did not take part in the vote).

This report highlights how the EU governments behave in the Council and the power dynamics between them.

The “Future of Europe” is not only a theoretical debate about how the European Union should look like in 2025. The principles underlying the scenarios laid out by the European Commission President’s white paper are applied every day when Member States make decisions in the EU institutions. Analysing how politicians cast their votes, whether in the European Parliament or in the Council of Ministers helps us understand the current political developments in the EU, beyond the carefully-crafted (and often confusing) statements made by officials.

The event that triggers this report is the occurrence of the least consensual vote in the Council (since 2009, when we started collecting data on Council voting). The directive on the protection of the financial interests of the EU (“PIF directive”) was adopted with the support of Member States representing only 69.12% of the total EU population, thus only 4 points above the 65% threshold. This piece of legislation lays down common rules for sanctioning fraud, including VAT fraud, money laundering and the misappropriation of funds. This is how governments voted: 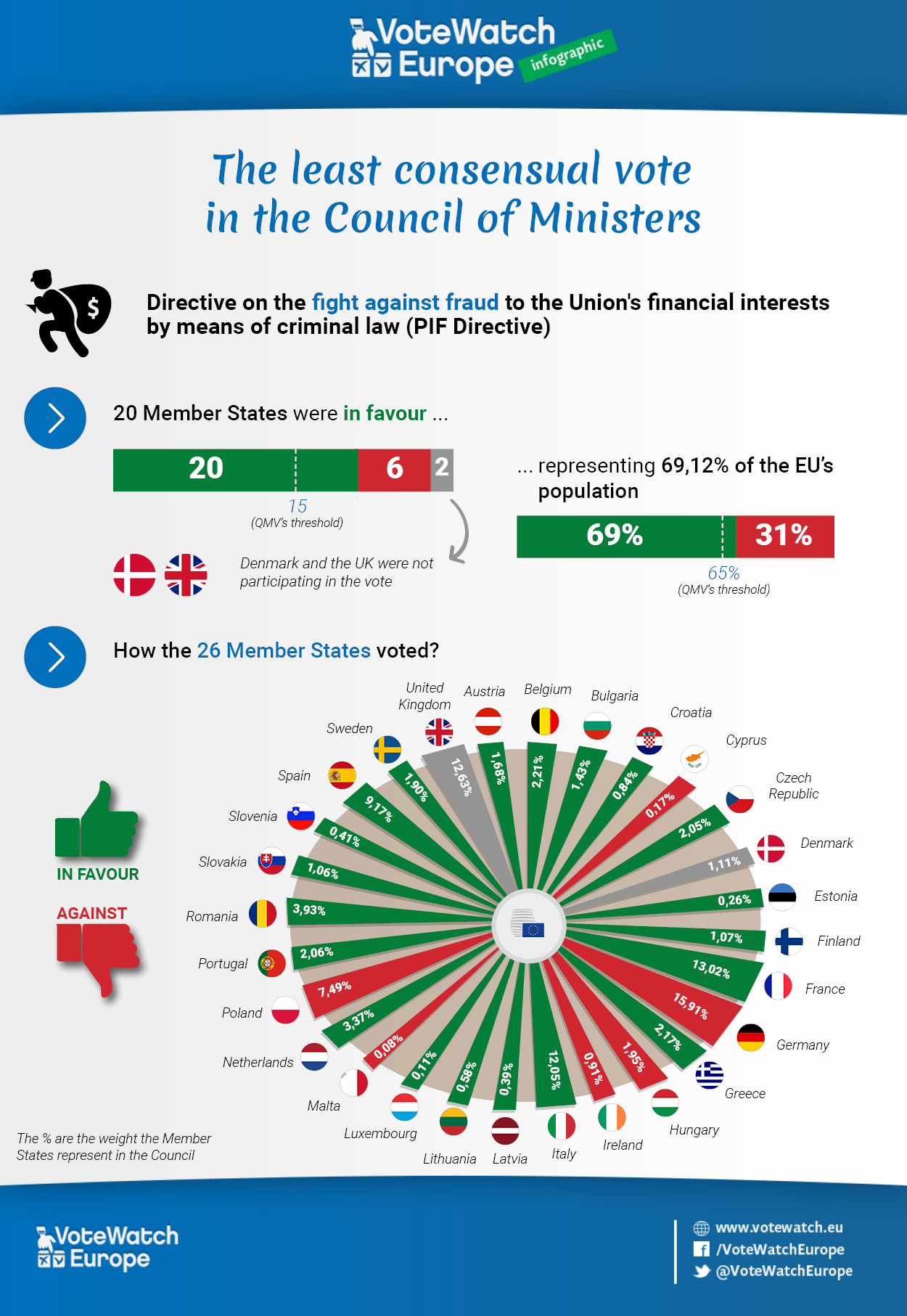 Six Member States voted against it, including large countries such as Germany and Poland. Many Member States had strong reservations regarding the directive, especially as to whether the EU should have a say on the fight against VAT fraud. It seems that some governments were reluctant to increase criminal penalties, as well as to potentially give more power to the EU to prosecute fraud-committing people and economic entities.

Notably, the position of Germany seems striking, since Berlin is often at the forefront of new plans for integration, while this time the German government voted against the new rules on improving the defense of EU’s financial interests. Nevertheless, as shown above, Germany was outvoted. As revealed in a recent study, despite Chancellor Merkel being very active and visible in the debate on the future of Europe and Germany being the leading economy, Berlin does get outvoted in the Council much more often than other Member States. In fact, among the remaining (after Brexit) 27 governments, Germany is the second most outvoted country (the first is Austria).

The “Future of Europe” in practice

The vote on the PIF directive highlights more general trends about decision-making in the Council, where reaching a consensus might become increasingly complex in the future. Every country has its own agenda and understanding of what the EU should be in the future. Some want a “smaller EU”, while among those who want a “stronger EU” there are differences on where (in which areas) the EU should be strong and where it should have limited powers. All of this might lead to raising difficulties when making decisions in the Council of ministers.

Long seen as overriding principals of European decision-making, consensus and unanimity are today under pressure, foreshadowing policy deadlocks. The divisions in the Union of 28 (soon 27) can potentially spur some Member States to integrate in clubs, which others perceive as putting European unity at risk. They claim that the European Union should remain united and every country should be on board when decisions are made and policies implemented. This scenario is endorsed by non-Eurozone and Central European countries, which do not want to see new emerging “clubs” they would not be part of.

To go ahead with qualified majority voting

Nevertheless, some countries want to go ahead with particular initiatives, regardless of the position of more reluctant governments. When decisions are made under qualified majority voting rules, these Member States will tend to call for a vote even if no consensus has been reached, as in the recent case of the directive on the protection of financial interests of the EU (PIF directive). In that case, the Presidency of the Council would assume a majority of countries is in favour of the proposal.

These non-consensual votes, which are far from the traditional consensual decision-making, raise questions as to the future of Europe. A more frequent use of qualified majority voting would allow governments to take ambitious decisions they could not achieve with unanimity, especially when these decisions are particularly sensitive to national interests. The downside, however, is that governments can freely criticise the EU at home when they are outvoted in the Council. Such a situation would lead to even more divisions among countries, as in the case of the vote on the relocation mechanism for asylum seekers, in 2015. 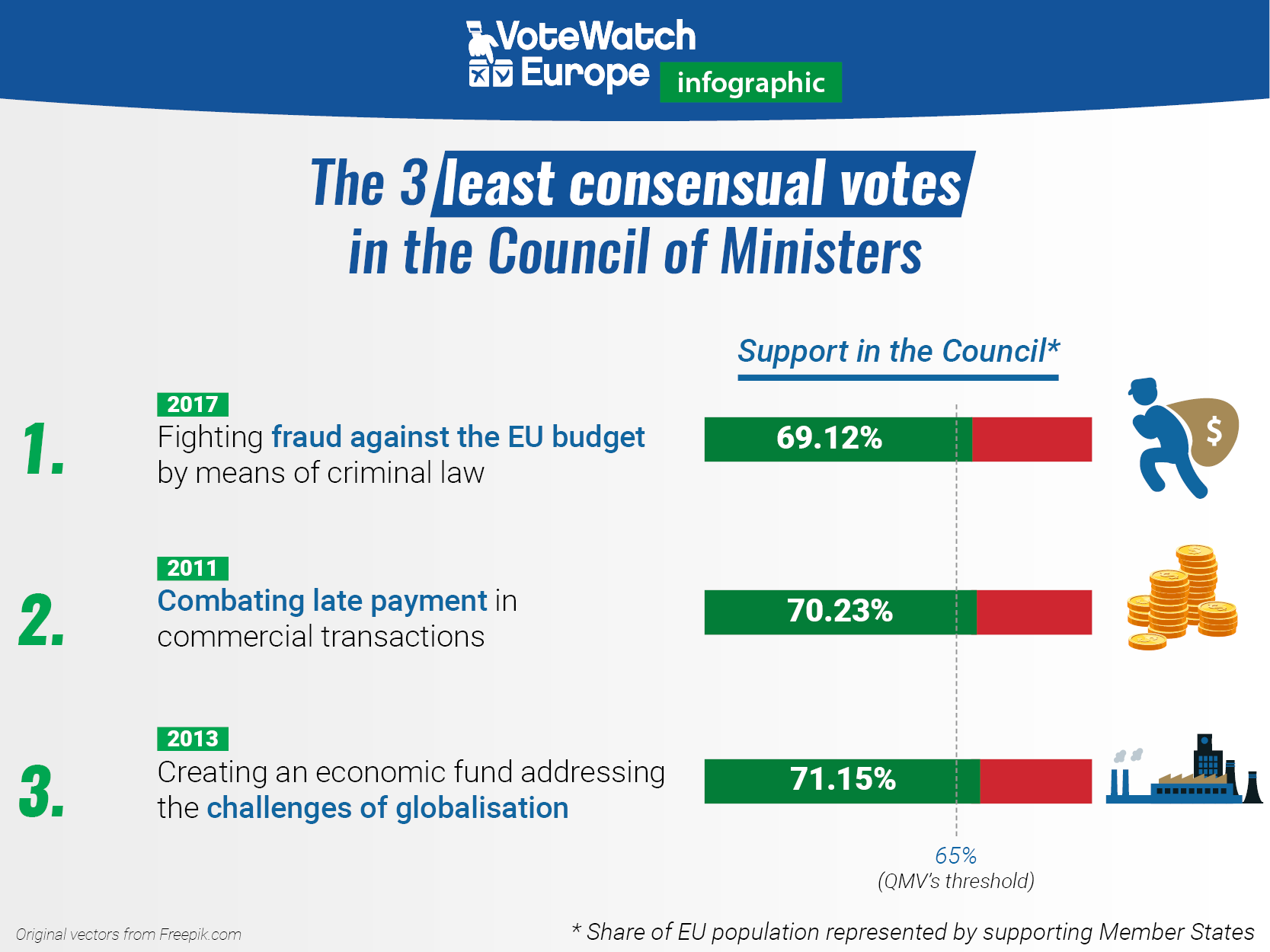 If unanimity is required for a decision to be adopted by the Council, the most supportive countries of more EU cooperation and integration can decide to establish an enhanced cooperation. The multi-speed Europe option is not new, but it is now gaining momentum. It is endorsed by continental countries, and especially by Germany, France, Italy and Spain, which recently stressed the need to strengthen the European defence, the Eurozone and EU social policies. This scenario is roundly criticized by central European countries, which warn against the “disintegration” of the EU.

Three enhanced cooperation procedures are currently into force and one should be created in the following months. After four years of unsuccessful negotiations, 16 Member States will establish a European public prosecutor’s office (EPPO), thus overcoming the veto by more reluctant countries. 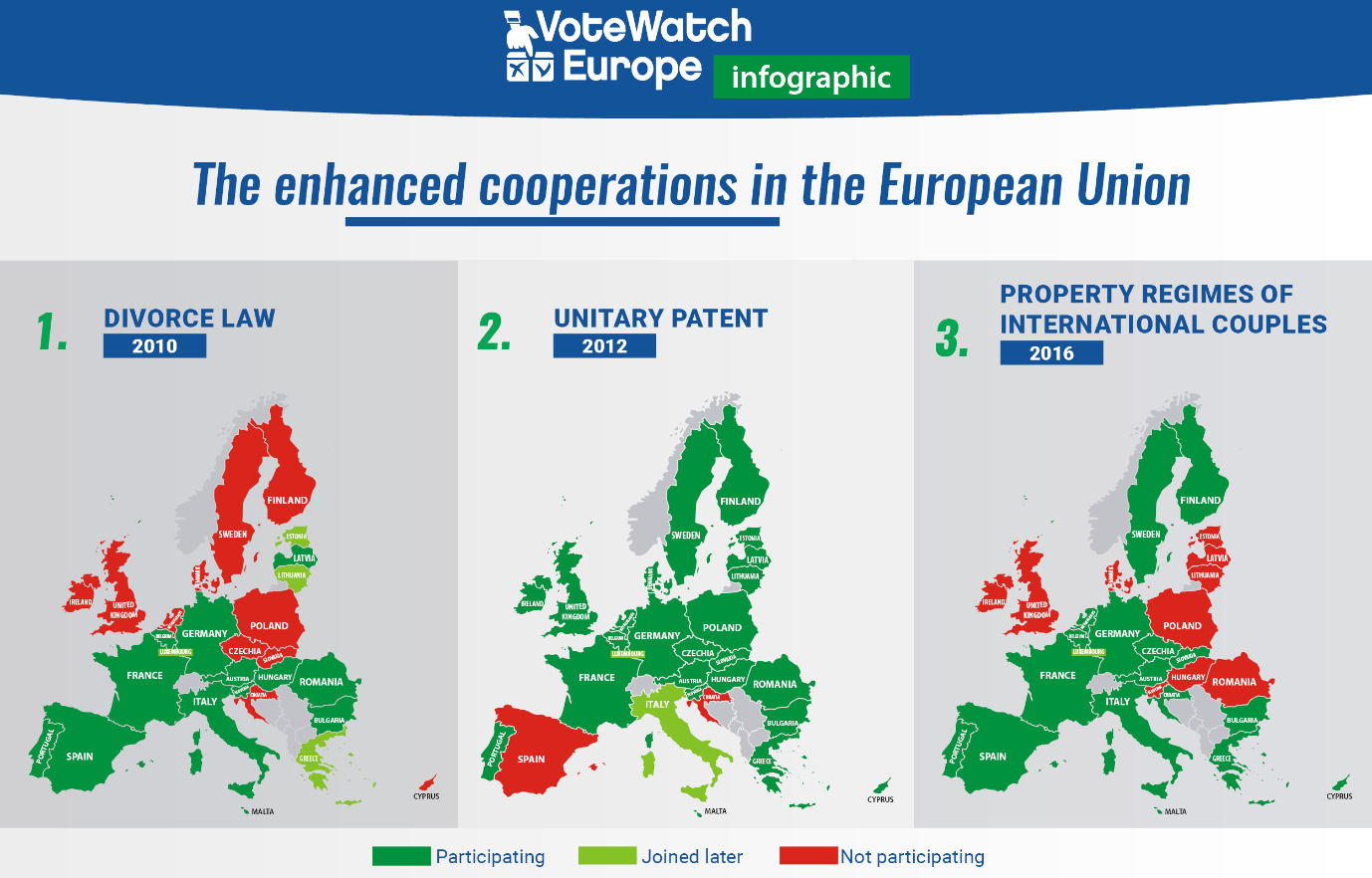 It seems that the qualified majority voting and formal votes in the Council will be increasingly used in the following years, whether in EU legislative areas or for more sensitive political choices. This does not necessarily mean that the big countries will be at an advantage, as they also tend to be left in minority, as in this case of the PIF directive. Other well-known examples include Poland being outvoted on the reappointment of Tusk as Council President, or the UK being outvoted (before voting to exit) when appointing Juncker as Commission President. However, there are many more (less-known) examples of sectoral legislation where decisions are taken by qualified majority and where the ability of a government to rally a majority is decisive for succeeding or failing to promote its own policy agenda (read this report for more on coalition-formation in the Council).