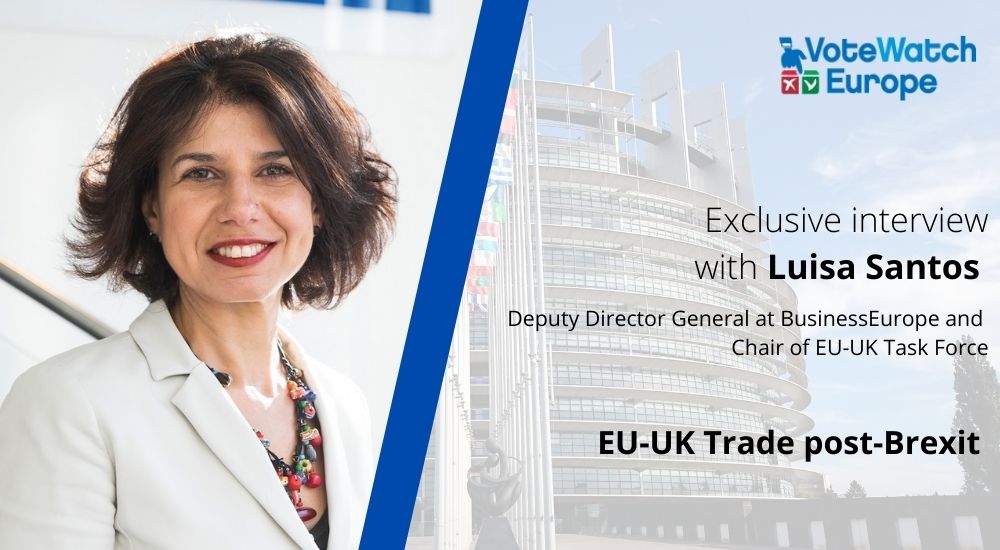 The EU-UK Trade and Cooperation Agreement was signed in December 2020, and brought into effect in May 2021, as a post-Brexit trade deal. Yet, many questions and challenges remain, such as the Northern Irish protocol and the UK losing its representation at the EU legislative level.

VoteWatch reached out to Ms Luisa Santos, Deputy Director General of BusinessEurope and Chair of BusinessEurope’s EU-UK Task Force to find out more about the future of the EU-UK trade relationship.

VoteWatch Europe: Following the agreement of the UK/EU Trade and Cooperation Agreement, what are the biggest challenges facing businesses who trade between the UK and the EU?

Luisa Santos: I think there are several challenges, of course. The main challenge is the fact that the UK is no longer in the Single Market and the Customs Union so for the moment not all checks and controls have been introduced, especially for European goods entering the UK market. There are already checks and controls however for UK goods entering the European market, which means more work for people and increased delays in border crossing.

The other issue is that, for the moment, the UK has not significantly changed its regulations, but there are changes and there will be changes in the future. For example, products that are very sensitive and normally have a lot of regulation, in many cases companies have to do a test in the UK and a test in the EU because of these changes and the fact that the UK is out of the Single Market. Often the labels are different, so you need to have different labels. These are some of the issues that are being felt by companies.

Additionally, I would say there is a challenge in the area of services, when it comes to mobility of workers and recognition of professional qualifications, there has been quite a significant change with the UK out of the Single Market. So it means there are many more conditions and controls, it is not so easy for UK and EU professionals to work in the market. I would say these are the main challenges at the moment that companies are facing.

VoteWatch Europe: A long-term, practical solution is needed to appease the current Northern Irish protocol tensions, what compromises must both sides take in order to reach a solution?


Luisa Santos: From our perspective, it’s not an easy problem to solve. We knew from the beginning that the UK’s decision to leave the Customs Union and the Single Market would have implications in Northern Ireland and the Republic of Ireland. We all want to respect the Good Friday Agreement so we don’t want to create controls and borders within the island but with the UK out of the Single Market and the Customs Union, for the above mentioned reasons, the rules will be different, so this means there will be additional controls and additional checks.

The solution that was found to keep Northern Ireland within the Single Market and the Customs Union is a way to at least ensure that there are no barriers and there are no additional controls between Northern Ireland and the Republic of Ireland. Of course, the controls will have to be put somewhere and so the solution was to put them in the Irish Sea. Frankly, there are not many other solutions to the problem, so what can we do?

VoteWatch Europe: Due to Brexit, the UK has lost its representation and influence at the EU-legislative table. How can British business ensure that their voice is heard during draft legislation?

Luisa Santos: We still have and will continue to have British business inside BusinessEurope, for example we still work with CBI. This is a way for British business to be involved in relevant files, of which there are many. Although the UK is out of the Single Market, this does not mean that whatever is decided in terms of EU legislation will not have an impact. In fact, it will have a strong impact because the EU remains a major trading partner for the UK. Considering the importance of the EU, I don’t think this will change significantly. I’m sure the UK will find other markets as well but proximity plays a key role so the EU will remain a key market for the UK. Therefore I think there is an interest in being able to know what is happening in the market and being able to influence, to a certain extent, the discussions about legislation that could impact British business.

Moving forward, it’s important that British business remains present and active in Brussels, even more so now, because the British government has no seat at the table. It will be an even bigger role and bigger responsibility that falls on the shoulders of UK businesses to make sure they are active and they have a voice in European discussions.

VoteWatch Europe: In order to protect Europe’s role in the global market post-Brexit, how is European
business represented at an international level?

Luisa Santos: We are normally present in a number of informal platforms that represent European business as well as business from other countries around the world like the B7 – the group of the 7 economies, an informal platform which also represents the business community of the 7 so we are there together with some of our members, including CBI. We are also part of the same platform for the B20, so the group of the 20 countries and these are the main platforms for international cooperation on different issues and challenges, such as the pandemic, trade and investment, climate etc.

We also have bilateral cooperation with the main business organisations in our key trading partners, like in the US with the US chamber, in Japan with Keidanren, in India with CII (Confederation of Indian Industry), so we have these international links as well on a bilateral basis. Apart from that, we have these two major international platforms of cooperation between businesses, that also give an input to governments of the G7 and the G20.

VoteWatch Europe: The Confederation of European Business represents 40 member federations across 35 European countries, including the UK’s CBI (Confederation of British Industry). How do you manage to represent a wide range of views?

Luisa Santos: It is challenging because we need to balance a lot of interests when we are defining a position. We have a very good basis of working groups, who are dedicated to different areas: in the international area, industrial policy, energy, economics and the Single Market. These groups are all composed of experts from our national members but we also have a group of companies that form our advisory and supporting groups. These are companies with investment in Europe, although some of them are not European, they have a foothold in Europe. We also work with European sector federations to ensure that we take into account all the relevant interests.

So our network is rather broad, our expertise is also extensive but this is basically what allows us to take positions. We have a process of wide consultation, building consensus through a procedure, which is an inclusive procedure so we try to take into account everyone’s positions. In the end, although we try not to vote, as I said we try to reach consensus, normally we take into account what is the position of the majority. In general, we always try to have a text that reflects the overall position of the business community and with which everyone feels comfortable. Sometimes we are not too specific if there are topics where not all membership is in agreement, but in general we have rather comprehensive and solid positions in the sense that they really reflect the views of our members.