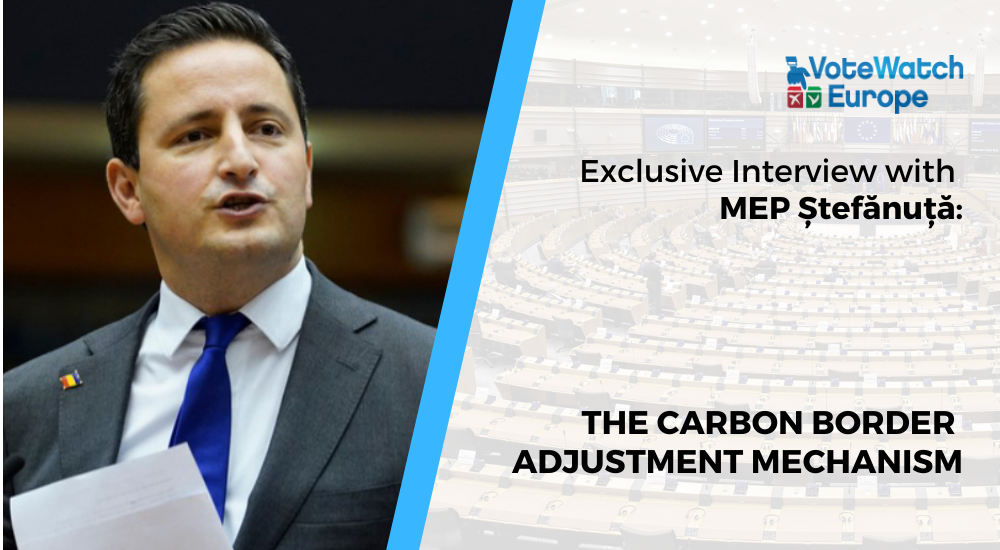 The new Carbon Border Adjustment Mechanism (CBAM) aims to address the potential gap in climate policy ambition between the member states of the European Union and third countries by putting a carbon price on specific imports to the EU. In July 2021, the European Commission issued its long-awaited proposal on this core element of the Fit for 55 package which is now awaiting further action in the European Parliament.

After our previous interview with Mohammed Chahim (S&D) on the topic, VoteWatch Europe has also reached out to Nicolae Ştefănuță (Renew) to discuss his views on the CBAM. The Romanian MEP will act as a shadow rapporteur for the upcoming legislation.

VoteWatch Europe: Mr. Ștefănuță, in comparison to the European Parliament’s resolution on the CBAM from March 2021, what are your views on the proposal that the Commission has issued this summer?

Nicolae Ştefănuță: It is a very good starting point. I think that the proposal creates incentives for greener production, discourages carbon leakage, can be a key climate diplomacy tool, and has a WTO-compatible design. There are, however, some divergences between the two positions: for example, the INI report calls for the CBAM to cover both direct and indirect emissions while the current proposal only addresses the former. It also addressed the Least Developed Countries and how the mechanism should relate to them by asking to be given special treatment in order to take account of their specificities and the potential negative impact of the CBAM on their development. I am sure the proposal will generate many heated debates among the MEPs on its key policy design choices: the sectoral coverage, the type of emissions covered, what exemptions will apply and what will be the use of revenues.

The CBAM is an important part of the Fit for 55 package. To put it simply, it is a solution to mirror externally what we are doing domestically. I think that the CBAM will be a strong instrument and an ambassador for our goal to reduce pollution. After all, we know that, even if Europe achieves climate neutrality in 2050, if other countries will not be ambitious enough, we will not achieve the Paris Agreement target. Therefore, the biggest challenge is to really be impactful with our instruments and policies for the future generations. Of course we will have to negotiate on technicalities and make sure that it is compatible with WTO rules, and that it is fair for our consumers and businesses, leaving no one behind. However, the message is unequivocally clear: we need to avoid carbon leakage and make sure that we are leading by example in the fight against climate change.

VoteWatch Europe: The CBAM’s main goal is to prevent carbon leakage. However, industry representatives have voiced concerns over the CBAM (at least initially) only applying to raw materials, but not to finished products. Could this ultimately lead to European producers moving the parts that are further down in the production chain abroad?

Nicolae Ştefănuță: It is key to find the right approach here and it is an aspect I will consider very carefully. On the one hand, starting with raw materials will mean that it might be simpler to implement and will give us the time to iron out and improve the implementation of the mechanism before extending it. On the other hand, applying it to manufactured products containing emission-intensive basic materials would be administratively quite complex, yet it would be a bigger incentive for EU trade partners to reduce their emissions.

Keep in mind that there is an option that, before the end of the trial period from 2023 to 2025, the Commission goes back to the European Parliament and Council and can propose to extend the CBAM to other goods and other emissions. I am hopeful we can find the solution that can produce the best outcome for the EU: the successful implementation of a WTO-compatible CBAM with the desired impact on lowering emissions.

My hope is that we can cooperate, as the goal is to create legislation that is capable of making a difference. Therefore, we want businesses not to run away from it, but to cooperate and collaborate to end up with a balanced text, which is also ambitious. We are creating a financial framework that supports SMEs and businesses to manage the transition and to be an important engine for change. I think that the European producers do understand their important role in fighting against climate change: they are not victims, but partners in this.

VoteWatch Europe: While the EP own-initiative report was entitled “Towards a WTO-compatible EU carbon border adjustment mechanism”, some of the EU’s international partners are concerned that the CBAM would not comply with WTO rules, or they even criticise the measure as potentially protectionist or discriminatory. How do you respond to such criticism?

Nicolae Ştefănuță: The aim of the CBAM is not to be a protectionist or a discriminatory measure. It is meant to protect the environment, the EU climate ambitions and the targets of the Paris Agreement while addressing the risk of carbon leakage.

The CBAM will only work if its design is compatible with WTO rules. There is no way around it and it is what we will be working on to make sure the result is fit and impactful. In my opinion, the current proposal is on the right track to achieve this.

VoteWatch Europe: Industry representatives are concerned that administrative burdens placed on the importing companies will be too high. Others fear that the CBAM will lead to an increase in prices for European consumers. Do you share these concerns?

Nicolae Ştefănuță: This is a new proposal with a different approach. It is understandable that some people may feel uneasy and uncertain about it and it is important to address and assess these concerns. Because the CBAM is set to only come into force at the earliest in the beginning of 2023 with a trial period that will run from 2023 to 2025, there will be time to tweak things and make sure it will not lead to unnecessary administrative burdens.

As for the increase in prices, the impact assessments seem to indicate that this will be limited. But I will be paying attention to this concern with the ongoing development of the proposal.

VoteWatch Europe: Shortly after the Commission issued its proposal, the United States Senate announced plans to introduce a “polluter import fee” similar to the CBAM. Do you think the measure will incentivise other nations to raise their climate ambitions in the future?

Nicolae Ştefănuță: It is a time of rising geopolitical tensions, but as a leader in climate ambitions and policies, we have a chance to pave the way for others to join Europe – if we get it right with the CBAM, that is. Climate pledges can only go so far and we can all see there are differences in the levels of ambition and the efforts between the countries. Therefore, I am hopeful the CBAM is going to also be a key climate diplomacy tool for the European Union in the efforts of meeting the Paris Agreement targets.

I have engaged with our US counterparts during the Parliament visit in July and I understand their approach is more of a regulatory nature. We will have to see how the two systems will interact, but I want to underline that the intention of the CBAM is not to punish like-minded approaches but to incentivise ambitious climate policies.

If you want to discover more about the MEPs’ position on climate issues, take a look at our in-depth assessment of the views and influence of MEPs’ on the Fit for 55 package. For more information, training, consultancy or media relations, contact us at [email protected]