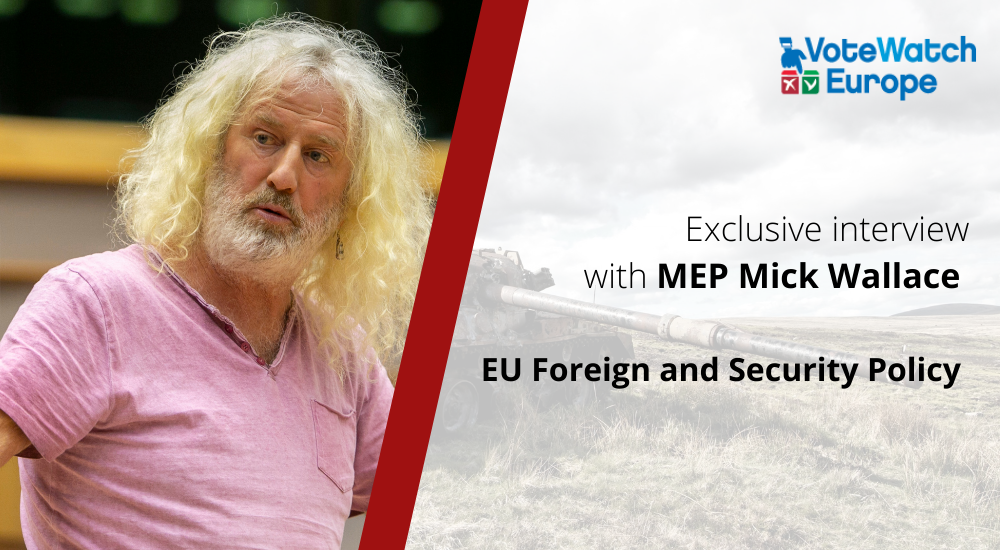 The recent withdrawal from Afghanistan has re-ignited debate on the future of European defence and the prospect of an “EU Army”. Vice-President Borrell’s suggestion of a rapid reaction force is the latest proposal for closer EU coordination in defence. However, it remains a controversial issue with supporters and detractors across the political spectrum. To provide a view of the opinions within the European Parliament, Mick Wallace, Member of the Security and Defence subcommittee gives his views on European Defence and the possibility of a rapid reaction force.

VoteWatch Europe: Do you believe that EU defence is able to meet the needs of EU interests as global politics becomes more multilateral?

Mick Wallace: I don’t see a lot of merit in EU defence, I don’t think it should even be called defence. Member states are spending 200bn+ a year on defence and military activity. I don’t think it’s rational behaviour, it’s promoting the arms industry. I believe the arms industry is powerful in Brussels at the moment and is very active in lobbying. Our defence spending should be only a fraction of what it is at the moment.

Some of this is being spent on border security. The EU is happy to assist Americans in bombing countries and destroying people’s livelihoods, and then preventing them from migrating to make a new life for themselves here in Europe.

In the Multiannual Financial Framework 2021-2027, for the first time money will be taken directly from the EU budget for military activity. I don’t know how this is being justified as it doesn’t fit under treaty arrangements but I believe we are going to see a lot more of it going forward from the resulting destruction.

As for external threats, there is a huge amount of anti-China, anti-Russia sentiment in the Parliament, though less so in the Commission. It’s being used to manufacture an “enemy” to justify this military spending. It is absolute nonsense that China or Russia are military threats to Europe.

VoteWatch Europe: Going forward, do you believe that the EU should become more independent in terms of defence of the US and NATO or should there be closer defensive collaboration?

Mick Wallace: We should distance ourselves from US imperialism. The US has been a force of interference around the world, using its military presence in order to maintain its economic interests. I am worried that the EU is following the US down the path of sanctions that are illegal without the approval of the UN Security Council. This is a new form of economic warfare that probably kills more people than bombs. The US currently has sanctions on 40 different countries and the European Union are getting fonder of following this approach without considering the costs to the people living in these countries. Our interference is a breach of Article Two of the UN Charter – maybe we should go back to respecting international Law, rather than ignoring it and favouring the US version called the Rules Backed International Order which is one where the US makes up the rules as it goes along to suit itself.

VoteWatch Europe: Would you agree with Vice-President Borrell’s comments that the EU must be more interventionist and requires a rapid reaction force? Or should focus be instead be put purely towards strictly defence?

Mick Wallace: I can’t see any useful application of a rapid reaction force. Who are we to interfere in other countries? We would only have the right to defend ourselves if these other countries were attacking us. We shouldn’t be fighting with Russia for example, we should be working with them instead. Meanwhile, the arms industry is profiting off of the idea of the need for this reaction force and supposed threats that aren’t there in reality. It’s clear after Afghanistan that it was never about nation-building, Biden has admitted that. The sensible reaction from the withdrawal from Afghanistan should be to avoid getting involved in other countries in the future, not preparing to do it again.

VoteWatch Europe: Are you supportive of initiatives such as PESCO and the European Defence fund as alternatives for the need for a reaction force, as well as the European Peace Facility which among would involve arming and training foreign armies?

Mick Wallace: I am against involvement with PESCO, I see PESCO being used to move countries closer towards the NATO sphere regardless of the public opinion towards membership. Despite its name, the EPF doesn’t have anything to do with peace. It is just another channel of military spending for the military-industrial complex.

VoteWatch Europe: If a reaction force were created, what would be the major differences required in your view from the previous EU Battlegroups which were brought in but never implemented?

Mick Wallace: I can see why they were never really implemented. France and Britain, the two main military powers in Europe were never very interested and disagreed with their structure. They were used as a way to draw in participation from smaller, supposedly neutral nations to try and form broader coalitions to be able to claim military efforts are widely supported.