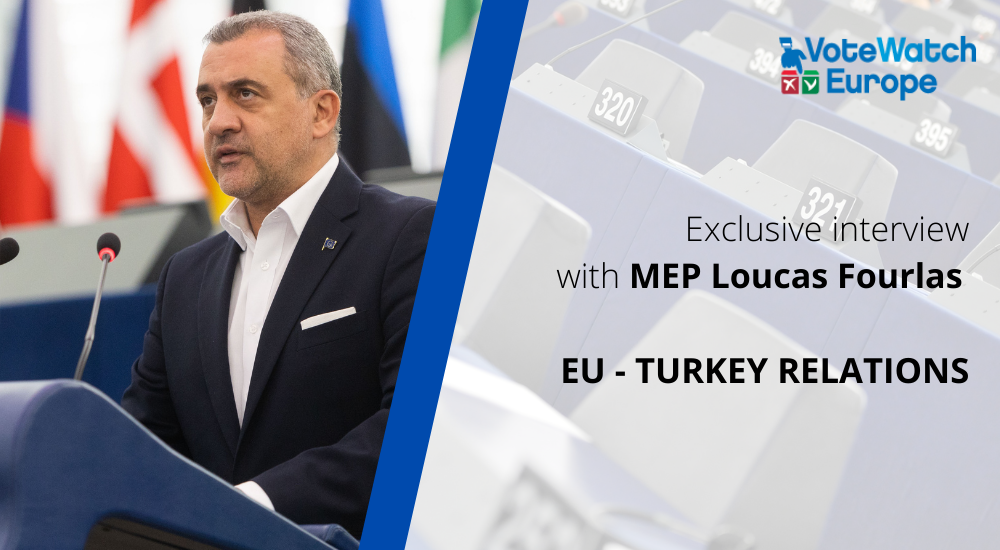 As the negotiations for Turkey’s EU accession tend to divide the European Parliament and create discussions between the Member States of the European Union, Turkey’s withdrawal from the Istanbul Convention enters into force.

VoteWatch Europe reached out to Loucas Fourlas (EPP) to discuss his views on EU – Turkey relations. The MEP from Cyprus is a part of the Delegation to the EU-Turkey Joint Parliamentary Committee.

VoteWatch Europe: How would you describe the current state of relations between the EU and Turkey?

Loucas Fourlas: We have to admit that the relations between the EU and Turkey are currently at a historic low point, something which was also mentioned in the recent report on Turkey adopted by the European Parliament. Despite being a candidate for EU membership, Turkey has chosen to distance itself from the European values and standards.

First and foremost, Turkey is still disrespectful regarding the sovereignty of Member States over their territorial sea and airspace. The tensions in the Aegean Sea and in the Eastern Mediterranean are unacceptable. As Members of the European Parliament, we have condemned Turkey’s illegal drilling activities in the Cypriot waters as well as its military interventions in the region. At the same time, Turkey continues to refuse to implement the Customs Union with the Republic of Cyprus, despite its obligation to do so as a candidate Member State.

Internally, the serious deterioration of fundamental human rights, the rule of law and freedom of expression continues in Turkey. What is more, Turkey’s decision to withdraw from the Istanbul Convention is another worrying and negative development, since it undermines women’s rights within the country.

Finally, the concentration of political power in the hands of Recep Tayyip Erdoğan is a real regress, since his behaviour has clearly strained the relations between the EU and its Member States.

VoteWatch Europe: In light of the new crisis in Afghanistan and the surge of refugees that it has resulted in, what would be the role that you expect the EU to play? Do you think Turkey and the EU will be able to cooperate on this matter?

Loucas Fourlas: The recent developments in Afghanistan have unfortunately once again highlighted some important weaknesses of the EU, which should definitely concern us. Not only is the lack of a common external policy more obvious than ever, but it was once again proven that the EU always follows and does not lead in situations such as the recent crisis in Afghanistan. Instead, Ι would expect the EU to handle the new migration crisis as a true Union and not to resort to the easy and unfair solution of letting the vulnerable EU Member States of the front line handle the irregular wave of refugees on their own.

So far, the only thing that the EU has achieved with its inactivity is to allow Turkey to take action and appear as a saviour and as a regulator of the situation. However, we must remember that Turkey is a state which has not only instrumentalised the European migrant crisis in the past, but is also currently asking for billions of euros from the EU in a threatening manner. Taking these facts into consideration, the establishment of a cooperative relationship between Turkey and the EU is certainly possible but it is also quite difficult to envisage. A constructive relationship can only be achieved effectively if both parties make compromises, which is unfortunately something that Turkey does not seem to be willing to do.

VoteWatch Europe: The Facility for Refugees in Turkey has been running for over five years, and on the most part successfully, but there were moments when Turkey threatened the EU with breaking this agreement. How would you assess EU-Turkey cooperation on this front?

Loucas Fourlas: Despite the fact that the deal between the EU and Turkey helped to reduce the number of migrants coming into Europe, we should not forget that Recep Tayyip Erdogan is an untrustworthy partner for the EU, because he has shown lack of cooperation. He violated many times the terms of the EU–Turkey Statement and international law. The last five years the Turkish Government has continually tried to blackmail the EU in order to achieve its geopolitical aspirations in the region. I remind you, for example, of the unacceptable actions of Turkey 18 months ago, when thousands of migrants from refugee camps in Turkey were moved to the Greece border.

VoteWatch Europe: There have been some Members of the European Parliament calling for the termination of the negotiations for Turkey’s EU accession. Do you believe that this would be an appropriate way of dealing with the complications in the relations between the two?

Loucas Fourlas: As I have mentioned in the past, the time has come for Europe to discuss with courage and honesty what kind of relationship we want to have with Turkey. This year in the European Parliament, we called on the Commission to suspend Turkey’s EU accession talks until the country shows some progress. One thing is for sure: Turkish provocation can no longer be accepted. I believe it is time for the EU to impose tough sanctions on Turkey. Each time Erdogan is facing the threat of sanctions from Europe, he begins to soften his rhetoric. Ankara must understand that any illegal action will have consequences. This is the right direction in order to force Turkey to engage in constructive dialogue.

VoteWatch Europe: Considering the ongoing Cyprus problem, and the tensions that have been arising in the Mediterranean over the EEZ between Turkey, Cyprus and Greece, what stance should the EU hold in relation to Turkey to maintain good neighbourly relations while safeguarding the interests of all its Member States?

Loucas Fourlas: EU-Turkey relations are absolutely linked to the Cyprus problem. This is also indicated by Turkey’s 2005 Negotiating Framework, which calls upon Turkey to contribute concretely to negotiations for a comprehensive settlement in line with UNSCRs. As regards the stance of the EU, I repeat that it is time to use all the instruments and the options at its disposal including the introduction of real sanctions on Turkey instead of symbolic ones. Simple condemnations over its illegal exploratory drilling activities in the EEZ of Cyprus for example are not enough.

If you want to discover more about the MEPs’ position on climate issues, take a look at our in-depth assessment of the views and influence of MEPs’ on the Fit for 55 package. For more information, training, consultancy or media relations, contact us at [email protected]