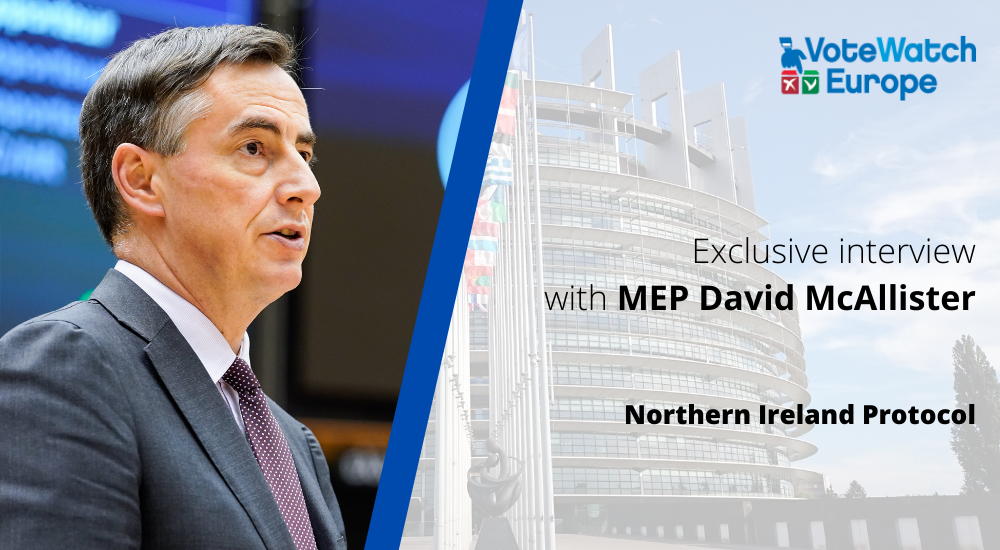 The Northern Ireland Protocol has become a significant sticking point in EU-UK relations post-Brexit, being pulled back into the spotlight after calls by the UK for the Protocol to be renegotiated and threats of triggering Article 16 to suspend it entirely. To gain an insight into the EU Parliament’s view of the situation, we spoke to MEP David McAllister, Chair of the Foreign Affairs Committee and Co-Chair of the UK Contact Group to ask his opinion on the issue.

VoteWatch: What changes are needed from the UK in order to agree upon a final Northern Ireland Protocol and avoid a trade war?

David McAllister: The Protocol on Ireland and Northern Ireland is an integral part of the Withdrawal Agreement. The current talks are not about renegotiating the Protocol. It is about finding practical and flexible solutions for the daily lives of people and businesses in Northern Ireland. The European Union is committed to protect the Good Friday (Belfast) Agreement, to maintain peace and stability in Northern Ireland, to avoid a hard border on the island of Ireland and to preserve the integrity of the Single Market. The Protocol is the guarantor to achieve all this.

VoteWatch: David Frost, the Brexit Minister, has announced that he wants to remove the role of the EC and the ECJ in their oversight of the Protocol. Is this something that can be considered, and if so, who would take on this position, in order to act as a mediator?

David McAllister: Under the Protocol, certain rules of the EU Single Market and Customs Union still apply in Northern Ireland. Consequently, the Court of Justice of the European Union is the one and only legal authority to interpret EU law. The EU cannot make any concessions on that. Removing the role of the ECJ would mean that Northern Ireland no longer has access to the Single Market. This would have severe consequences for businesses. When listening to people in Northern Ireland, the ECJ is not of great concern. More important is how to facilitate trade practically and how to cooperate closer with the EU.

VoteWatch: The EU have ruled out further renegotiation on this Protocol, but they have proposed a reduction in custom checks to help alleviate the problem. To what extent should the Commission offer compromise in order to avoid the UK triggering Article 16?

David McAllister: The European Commission’s package from 13 October aims to find solutions on how to solve the practical issues, which are on the table. This includes further flexibilities in the area of food, plant and animal health, customs, medicines and the EU’s engagement with Northern Irish stakeholders. In practice, it is a new model for the implementation of the Protocol, reducing checks on goods significantly. Triggering Article 16 of the Protocol would not solve any of the current difficulties. The Protocol is part of the solution of a problem. The problem is the hard type of Brexit!

VoteWatch: As Co-Chair of the UK Contact Group, if a compromise or renegotiations were agreed to, do you believe that the EU would or should seek more binding terms to prevent further attempts at renegotiation in the future?

David McAllister: I firmly believe that practical solutions can be found in the existing legal framework. The new proposals by the Commission have shown the sincere willingness of the EU to be flexible and pragmatic. We remain open to any acceptable solutions and to intensified talks with the UK Government on how to implement the Protocol effectively. Northern Ireland has unique access for goods to the world’s largest Single Market. This is a huge advantage for businesses. However, the EU must also be principled when it comes to the integrity of the Single Market.

David McAllister: Triggering Article 16 would lead to unpredictability and instability for the people and businesses in Northern Ireland. In addition, it would endanger the credibility of the EU-UK Trade and Cooperation Agreement for which the Protocol is a fundamental precondition. At the moment, I am cautiously optimistic that Maroš Šefčovič and Lord Frost will find a common approach on the unresolved issues, especially on medicines supply.