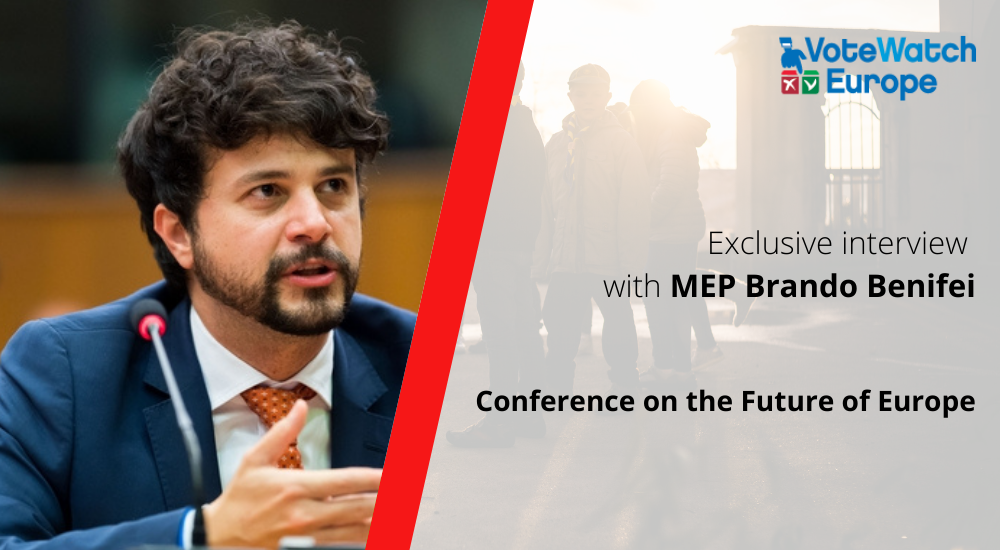 This year 2022 is expected to conclude the Conference on the Future of Europe (CoFoE), an exercise of deliberative democracy bringing together citizens and representatives of the EU institutions. After months of debates and consultations, questions remain regarding what the final outcome will be when the Conference ends in spring. Votewatch Europe has carried out several interviews as part of a series of materials about the CoFoE, presenting today an exclusive interview with MEP Brando Benifei. He is a Member of the Delegation to the Conference, representing Italy for the S&D group in the Parliament.

Votewatch: Before the conferences and debates began, there were some worries as to whether the results of the CoFoE would live up to the expectations. As a member of the delegation and having an insider perspective, do you share this concern or are you more optimistic?

Brando Benifei: I think that we must always be mindful of the possible risk that the outcome of the Conference could end up being somewhat disappointing, for the very simple reason that there are powerful forces in the EU that oppose any deepening of the European integration process and even reject the slightest possibility for change. At the same time, do not get me wrong, I remain fully optimistic. I am confident that thanks to our commitment, especially in the Parliament’s CoFoE delegation, but also after having seen the very serious and very keen involvement of the citizens, the social partners and the civil society representatives in the Plenary, as well as the preliminary outcomes of the citizens’ panels, we will reach ambitious and concrete results. We cannot afford, however, to simply wait and see what happens. We need to tackle the Conference not as a series of debates but as a strategic political process. It is up to us to steer it in the direction we want. Probably there will be tough talks to undergo with the Capitals at the end of the process, but we are ready for that.

Votewatch: CoFoE is expected to end by spring 2022. Earlier this year some politicians and stakeholders expressed their concern that this time limit would not allow the conference to actually draw strategies and have an impact on the future of Europe. From your point of view, do you reckon it should be extended?

Brando Benifei: Yes, I believe the work of the Conference should continue for one more year, but we need interim conclusions to be drawn up in the spring/summer of 2022, also to take stock of the progress achieved until then and establish the first important benchmarks. We have focused most of the CoFoE available time to define its working methods and its structures, it is now necessary to enlarge the basis of the discussion, reinforce the outreach to all corners of the Union and to elaborate conclusions that can become that manifesto for change that the EU desperately needs. It is a delicate exercise, which needs to be approached with great attention and great care.

Brando Benifei: I agree with them, and the situation needs to be changed. Youth policy has always been one of my main fields of work, both as a Member of Parliament and as a political activist, before my election. To change young people’s perceptions you need much more than a process of the kind of the CoFoE, which, although very valuable and necessary, strives to produce indications on broader policy and institutional reform objectives. We need structural changes not only at the EU level but also (and especially) in the Member States in order to put young people at the centre of the democratic life of our society. Starting with a complete rethinking of how the society of tomorrow should work. It is unacceptable to see the levels of youth unemployment and NEET rates we are experiencing in the EU, especially in the aftermath of the (ongoing) pandemic. It is unacceptable to see investments on youth policies, including in the cultural and educational field, always relegated to the corner of any draft budget law of any state, almost looking like a burden rather than a key investment component of a solid and future-oriented economic strategy. It is unacceptable to see such poor levels of involvement of young people and youth organisations in law and policy-making, where instead permanent consultative and collaborative mechanisms for participation in all stages of the policy development, from drafting to delivering, should be embedded in the institutional process. CoFoE contains some very interesting and advanced mechanisms and it can definitely be seen as a worthwhile ‘European pilot project’ for better involvement of citizens and young people, but it is not solving the issue by itself, as the problem is much broader.

Votewatch: The CoFoE uses the EU Digital platform as a hub for citizens from all over Europe to submit their ideas for different topics. Climate change and the environment is the most discussed topic in the platform, with more than 2,000 idea submissions. Do you think the CoFoE will lead to more environmentally friendly policies in the EU?

Brando Benifei: The EU is committed to be a global leader in the battle against climate change, with ambitious and concrete proposals. The European Green deal, the Climate Law and the Fit for 55 package, the Climate Social Fund, the biodiversity strategy, the circular economy one and the attention given in the Recovery Plan to the green transition are all essential pieces of this puzzle. The dramatic situation we are facing with rising temperatures worldwide and the catastrophic climatic events that are more and more common oblige us to set the bar of the ambition not just high, but very high because there is no second chance. I think the CoFoE will unequivocally produce conclusions that demand more ambition in the EU response to climate change, and I hope that such conclusions can be used as a new mandate to push the EU executive and the EU leaders to do more.

Votewatch: Until very recently, you were the president of the Spinelli Group, where the CoFoE is mentioned as “an event […] to debate and decide how to go about adapting our institutions in a way that will complete the building of our federal Europe”. Being half-way through the conference now, do you think it will bring Europe a step closer to this federal project?

Brando Benifei: Yes I do. As (former) President of the Spinelli Group, I worked hard to organise and launch the Spinelli Caucus, which gathers all members of the CoFoE plenary who want to support us in building a better Union, a federal Union. We are numerous. We are well organised. We are dedicated to show the value of a federal project for the EU. Talking about some kind of an “EU super state” will inevitably raise criticism, but going towards the federal path means exactly the opposite of that. It means strengthening the quality and quantity of the democracy in the EU, to be achieved through a review of the Treaties, in order to bring the citizens closer to where the decisions are taken. For example, by strengthening the prerogatives of the European Parliament – directly elected by the citizens; by reducing the governments’ freedom to block any decision they please when exercising their veto power; by creating a Union that is more capable to address quickly and effectively a health crisis, like the COVID pandemic, or to negotiate as equal in front of other global actors such as Russia, China or the United States, or having the authority to limit and regulate the actions of multinational corporations and tech giants, which are influencing more and more the lives of citizens.

As federalists, we want a Union that is capable of delivering results for the direct interest of the European people. When discussing all these issues, citizens are telling us exactly the same thing. So yes, I do believe that Europe is one step closer to become a federation after the CoFoE.