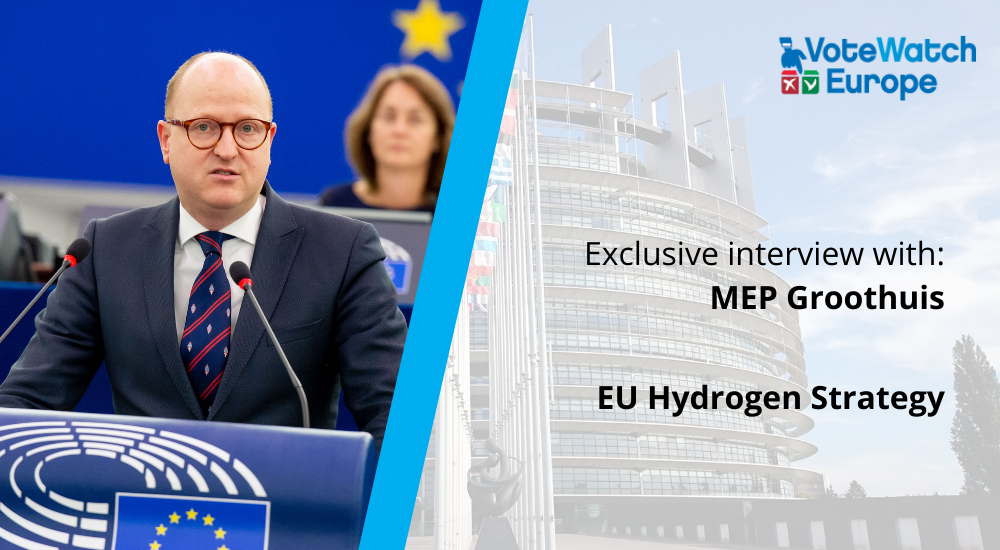 The EU Hydrogen Strategy, adopted by the European Commission in the second half of 2020, will be the main point of reference for future EU action on hydrogen and the decarbonisation of the European energy mix. Hydrogen is attracting attention for both its potential in supporting the transition to a climate neutral economy, whilst at the same time revitalising that same economy. However, an outstanding issue surrounds hydrogen: the production method.

There are several possible paths to hydrogen production, depending on the technical process used, but most importantly, depending on the kind of energy involved in the production. While a variety of possibilities have been and are being explored by the industry, the most interesting ones – in terms of marketability potential, scalability and environmental impact – are blue and green hydrogen. Blue hydrogen is generated from natural gas linked to carbon capture and storage (CCS) technologies, meaning that the emissions produced during the process are not released into the environment, but captured and stored underground. However, this is not a completely carbon neutral process, because around 10-20% of the emissions produced cannot be captured. By contrast, hydrogen is labelled ‘green’ when it is generated from renewable energy sources, through a process called “electrolysis”. Coming from renewable energy, green hydrogen is usually referred to as the “clean hydrogen”, since it has zero environmental impact. The difference in the environmental sustainability between these two methods is the main driver of debate around the technology.

VoteWatch Europe has reached out to MEP Bart Groothuis, who was the shadow rapporteur for the own-initiative report on “A European Strategy for Hydrogen” adopted in May 2021.

VoteWatch Europe: Do you think that hydrogen technologies are essential to achieve the carbon-neutrality objectives, or should the EU push more for investments in other clean energies?

Bart Groothuis: Yes, we undoubtedly need hydrogen, and the reason is quite simple: 40% of our economy and industry cannot be electrified, which means we need an alternative solution for these sectors. At the same time, hydrogen is a scarce resource and, foremost, it is not one for everyone. To put it in perspective, our goal is to produce 40 Gigawatts of hydrogen by 2030, but in the Netherlands, just one steel factory consumes 6 Gigawatts. It follows that the two things must complement each other: hydrogen has to be applied where electrification is not possible, such as high-temperature industrial processes (chemicals, cements, fertilizers, etc.). But since it is scarce, we need to foster a smart implementation of the technology. It must be part of the energy mix, but it is not a silver bullet.

Bart Groothuis: Indeed there is a lot of debate around this issue, however, if we talk about the end goal we want to achieve, namely renewable hydrogen, and we want to have a conversation on how to get there, I think the debate will be much easier if first we focus on how to ramp up the market, then also the approach and mentality start changing. What many people still do not know is that there is already a hydrogen market of over 100 billion dollars a year worth in revenues. We need to use this market and exploit it to decarbonise the sector. We could ramp up new production facilities and make sure cheap infrastructure is available, but we need to look rationally at this issue, and in this, it is very clear that we need blue hydrogen. Especially given that the alternative, namely green hydrogen, is just not there yet; there are just not enough renewable energy capacities, not enough infrastructure facilities. It is hard to argue against blue hydrogen at the moment. I am not against also using electrolysers from renewable energy sources, through solar or nuclear power, but in order to attain our goal we need to rationalise discussions.

VoteWatch Europe: Talking about the issue of blue hydrogen production and how to regulate the carbon capturing methods, how do you think the EU should proceed on that? Is carbon capturing and storage something worth fighting for and investing into?

Bart Groothuis: Yes, I am a strong supporter of CCS technologies, for the reason I just mentioned. There is already a 100 million dollar market, ready to be used to ramp up the technology. However, this is not the only reason, there are also some supporting points in favour of this technology that l would like to raise.

Firstly, all CCS technologies are very interesting for their export potential. So if we enhance our production and implementation capacities, we might open a new export market for the EU: the US is already requesting to create export deals on this technology. Secondly, it is important to consider the environmental potential of these technologies. Through these processes it is possible to separate not only CO2 molecules, but also other harmful gases. It is extremely important that we realise this: it is not only a climate question, but also an environmental one. Thirdly, in every scenario described in the most important scientific reports, from the IPCC to the World Energy Outlook, and even in the most optimistic of the described scenarios, we still need 10% of the energy mix to come from gas. But it is paramount that we rely on natural gas associated with CCS technologies.

And l also want to add something new to this debate, a fourth element: it is not just a matter of incentivising emission reductions – and l think the Commission understands this as well – it is also about the removal of carbon. That is a new game that we are contemplating. It is CCS in square, it is direct air capture, but it is also a way of getting carbon out of our environment right now. I welcome that the Commission is working on a new plan regarding this issue, to be presented in 2023, and l very much appreciate that. We have to exploit these new technologies to step up our game, in order to not only set a price on carbon capture, but also to actually remove emissions from the environment, then we can really run. The optimal would be to really incentivise markets to make all of this possible in practice. The Commission says that in 2030 green hydrogen will be cheaper, thus, some want to cap CCS. But we should not necessarily reason like this, if there is a market interest for CSS we need to exploit in the meantime as a step towards green hydrogen.

VoteWatch Europe: Many EU countries are now starting to invest in hydrogen technologies, however many investors lament the lack of clear regulation when it comes to the EU market for hydrogen. How do you envisage a possible regulatory framework for this technology?

Bart Groothuis: When discussing the report in the Parliament, one of the main priorities for me, and one that l made sure to add to the report, was the possibility to trade on hydrogen, in euros. The vast majority of trade exchanges are in dollars, which provides a great deal of advantage, as well as the possibility to create incentivising trade regimes. If we trade in euros, then we have a new geopolitical tool at our disposal to trade with third countries. And if we want to do so, if we want to set up a market, first, we need certificates, guarantees of origin, we need to have a clear regulatory framework and standard-setting bodies, which are just not there at the moment. While some fear certifying blue hydrogen would only incentivise the fossil industry, I disagree and believe we should rationalise the debate.

The same reasoning can be applied to import, and the extraordinary feature of hydrogen is that the transition will be from gas to gas: from natural gas to hydrogen gas. Yet, that transition can only be made and only be done, if the technology is certified and we have clear rules on what you can expect and insist on, and that is a problem.

We are expecting one big gas package before the end of the year and I am looking forward to what the Commission will propose. I would advocate to seperate hydrogen from the Gas Directives. Hydrogen and gas are in completely different parts of their lifecycle. Gas is a mature market, with market regulations and long existing standards, and we are trying to become less dependent on gas. Hydrogen on the other hand, is still at its infancy. There is still a need for standards and infrastructure and instead of reducing we need to ramp up the market. In other words, they are very different, and I would advocate for separating the two, for example through a Hydrogen Act, It would be a bold, but necessary step.

VoteWatch Europe: Turning to the network issue, do you think the “Hydrogen Backbone” initiative for repurposing old natural gas pipelines is a good way to foster this technology or could it hamper the development of other production methods once renewable energies become more economically viable?

Bart Groothuis: The transition, as I said, is from gas to gas and if you think about it in this way, the new gold is already in the ground, and it is our pipeline system. They are already there, connecting all Europe: an infrastructure that we can use to pump hydrogen across the EU. And, as l said, if we have the ambition of producing 40 Gigawatts of hydrogen by 2030, then we need blue hydrogen and we need imports from other countries. Thus, it would be fantastic if we could not only repurpose, but also ensure imports. On this latter point, let me add that there are some signs for the future. Indeed, within the TEN-E regulation under discussion right now, we made sure that not only transportation of hydrogen is included, but also the storage, which will be essential in the future import capacity of the EU. And the majority of the Parliament backs this addition. Everyone wants to strive for the perfect solutions, but perfection is the enemy of the good.

You can check all available interviews with MEPs here