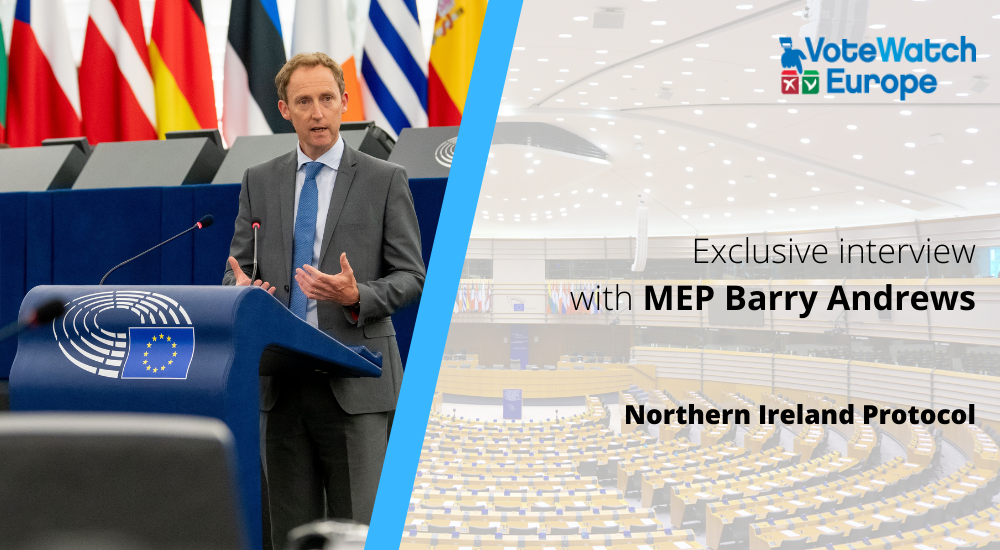 The Northern Ireland Protocol has become a significant sticking point in EU-UK relations post-Brexit, being pulled back into the spotlight after calls by the UK for the Protocol to be renegotiated and threats of triggering Article 16 to suspend it entirely. To gain an insight into the EU Parliament’s view of the situation, we spoke to MEP Barry Andrews, Parliamentary Member of the Delegation to the EU-UK Parliamentary Partnership Assembly to ask his opinion on the issue.

VoteWatch: What changes are needed from the UK in order to agree upon a final Northern Ireland Protocol and avoid a trade war?

Barry Andrews: Compared to where we were in November when Article 16 was considered inevitable, December saw a pause of negotiations over the festive period, ready to resume once again in the New Year. There were several significant developments over the course of the last couple of months that allowed us to reach this point. The first was the Commission’s extraordinarily generous package of proposals published in October, which was very well received in Northern Ireland. The second was the unwavering support of the US for the Good Friday Agreement and the peace process on the island of Ireland, which was instrumental in keeping both parties at the table. The final development was a change in tone by the British side, which shifted from being extremely hostile to being relatively more constructive. If the UK choses to put the people of Northern Ireland first, and engage positively with the EU, I believe we will be able to find long-lasting, sustainable solutions.

VoteWatch: David Frost, the Former Brexit Minister, announced that he wanted to diminish the role of the EC and the ECJ in their oversight of the Protocol. Is this something that can be considered, and if so, who would take on this position, in order to act as a mediator?

Barry Andrews: The ECJ interprets EU law. As there is a body of EU law that continues to apply to Northern Ireland, the ECJ must remain involved. The EU has demonstrated that they are open to exploring solutions within the framework of the Protocol however, what the UK is proposing would amount to fundamentally changing the Protocol. This would be unacceptable, and it is imperative that the UK meets the commitments it made under the Withdrawal Agreement. Furthermore, were the UK to insist on the role of the ECJ being removed, this would result in Northern Ireland losing its privileged access to the EU market. This is certainly not something businesses and citizens in Northern Ireland want. Recent reports from the UK suggest that they have accepted the fundamental role of the ECJ, and this issue is no longer given the prominence it was previously.

VoteWatch: The EU have ruled out further renegotiation on this Protocol, but they have proposed a reduction in custom checks to help alleviate the problem. To what extent should the Commission offer compromise in order to avoid the UK triggering Article 16?

Barry Andrews: The Commission has gone to great lengths to find practical solutions – within the framework of the Protocol – to issues related to its implementation. This has been recognised by citizens and businesses in Northern Ireland, and should also be acknowledged by the British government. However, these proposals are conditional on the UK taking several actions. So the ball is very much in the UK’s court. It also is worth noting that many of these “conditions” are things the UK has already committed to, such as providing access to IT databases for trade data.

VoteWatch: As a member of the Delegation to the EU-UK Parliamentary Partnership Assembly, do you approve of how the negotiations have been handled so far between the EU and UK? Should there be a different approach to how the Commission have acted in providing proposals to reduce the impact of the Protocol on Northern Ireland

Barry Andrews: My main concern when it comes to ongoing discussions is the relatively limited involvement of Members of the Northern Ireland Legislative Assembly (MLAs). I want to see more direct dialogue between Belfast and Brussels, so we are not reliant on the UK government to accurately transmit their position. This will be a priority for me in the New Year, as we work towards the first meeting of the EU-UK Parliamentary Assembly.

Barry Andrews: I do not think it is entirely helpful to engage with hypotheticals however, needless to say, the EU would take such action extremely seriously. The conclusion of the Trade and Cooperation Agreement (TCA) was predicated on the implementation of the Withdrawal Agreement, including the Protocol on Ireland/Northern Ireland. The EU would certainly take this into consideration if the UK were to act in a way that breached its obligations.