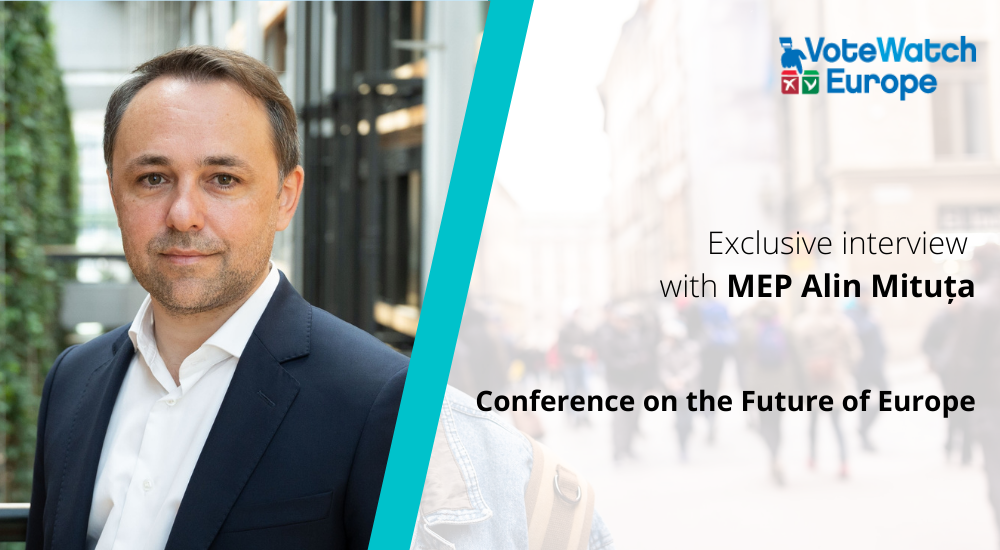 The Conference on the Future of Europe (CoFoE) is expected to come to an end by spring 2022. Half-way through this deliberative democracy exercise, there are still questions and uncertainty regarding what the final outcome will be.

VoteWatch Europe has carried out several interviews as part of a series of materials about the Conference, covering the insights of Green/EFA MEPs Eleonora Evi, from Italy, (here) and Damian Boeselager, from Germany, (here).

Today, we present an exclusive interview with MEP Alin Mituța, who is a member of the Delegation to the Conference on the Future of Europe from Renew Europe.

Votewatch: Before the conferences and debates began, there were some worries as to whether the results of the CoFoE would not live up to the expectations. As a member of the delegation and having an insider perspective, do you share this concern or are you more optimistic?

Alin Mituța: There is, indeed, a lot of resistance to change in the EU, especially from some Member States. Unfortunately, I also see a lack of real political leadership and commitment on the side of the Commission on the issue of the Conference. I did expect much more from President von der Leyen and I still hope that she will eventually put her weight behind the conclusions of the Conference.

Just before the start of the Conference, a letter came from a group of Member States asking that changes of the Treaties be ruled out from the scope of the Conference. That is not a very open way to start a consultation process with European citizens with the hope of changing how some things work in the EU. We knew from the very beginning that we needed to have a strong engagement from the citizens in order to surpass this resistance. Citizens and civil society organisations needed and still need to get involved and speak their minds about the EU regarding health care or education, or about protecting the climate. When the voice of citizens is loud and clear, no politician can say otherwise.

Citizens who want change have a strong ally in the European Parliament and especially from my group, Renew Europe, which is pushing hard for real reforms. I am moderately confident that this view will prevail as I can see this high level of ambition is also strongly supported by the Citizens Agoras.

Votewatch: CoFoE is expected to end by spring 2022. There have been concerns that this time limit might not allow the conference to deliver results, and proposals to extend the conference’s calendar. From your point of view, do you reckon it should be extended?

Alin Mituța: Regarding the calendar of the Conference, I think we should have a balance between the need to deliver results and the need to have a clear and transparent calendar.

First of all, extending the calendar of the Conference too much will affect the capacity of the Conference to deliver results. We need to have a deadline in order to start putting proposals on the table and in the report. If we do not have an ending in sight we will not feel the urgency to do so, and if there is something that will for sure kill the Conference, it is endless talks without clear results and proposals.

On the other hand, we have to consider what is happening with the pandemic. As we can see, the December Plenary Session has been postponed. So, we also need to be flexible. In the end, our main purpose is to deliver results, and for doing so we have to find the right balance between flexibility and clarity when it comes to the calendar.

Moreover, I want to make another point. Although this Conference needs to have a deadline in order to deliver results, I believe that we should take the example of COFOE and transform it into a permanent mechanism of consultations with citizens, in other words, an Annual European Citizens Agora.

This is one of my proposals in the Plenary. The Joint Declaration on the Conference on the Future of Europe argues that European citizens must gain new opportunities to express themselves on the European stage. So, we need to think of ways for citizens to do that not only every five years, or on a special occasion, as COFOE is, but annually. Such an Agora could work in close connection with the consultation mechanism that leads to the establishment of the annual Work Programme of the Commission. Citizens need to be involved in this.

More about my proposal can be found here.

Alin Mituța: This perception will change only if the Conference delivers concrete results and reforms. Only then will the citizens feel that their voice was heard and their efforts to get involved were not wasted. But, if the Conference fails to do so, it will be a huge blow to our efforts in changing such perceptions as illustrated by the survey.

Moreover, this perception will further change if the Conference is not a one-shot event but citizens are called to express their opinions and have an impact on EU decision-making even after the end of the Conference. It reinforces the need for the introduction of an annual European Citizens Agora. If we give citizens a say over key priorities they will gain more confidence in the EU decision-making.

Votewatch: The CoFoE uses a Digital platform as a hub for citizens from all over Europe to submit their ideas for different topics. Climate change and the Environment is the most discussed topic in the platform, with more than 2,000 idea submissions. Do you think the CoFoE will lead to more environmentally friendly policies in the EU?

Alin Mituța: I certainly hope so. From what I have read in the reports from the EU Digital Platform that were presented in the Plenary, the overwhelming majority of the proposals were in favour of more environmentally friendly policies. And, as previously stated, if we want to change the perception of citizens that they do not have a say in key decisions at the EU level, we need to find ways to translate those proposals into the EU environmental policy.

From my perspective, our purpose in the Plenary of the Conference, as representatives of the European Parliament, is to channel these proposals of the citizens into concrete legislative results. For example, I am part of the Health Working Group, and from this position, I tried to gather citizens’ ideas and translate them into concrete proposals to be inserted in the final report and afterwards into reforms. Citizens were very keen to express themselves on the topic of Health as well, on the Digital Platform and in the Citizens Panels.

I have noticed a strong desire for more cooperation at the EU level when it comes to healthcare. Citizens are asking for a strong Health Union. And I have put forward 5 key proposals that would get us closer to this desire, such as common minimum standards in healthcare, a European list of essential and priority medicines and the introduction of European plans for mental health, cardiovascular disease or rare diseases.

More about these proposals can be found here.

Votewatch: You are co-founder and former Executive Director of “Europuls”, a Brussels-based Romanian think tank with the goal of encouraging public debate on European issues. In your opinion, is the CoFoE being sufficiently spoken about among civil society? Has its divulgation strategy been efficient?

Alin Mituța: Some civil society organizations, like Europuls, try a lot to contribute to the Conference on the Future of Europe, with events and proposals. However, the feeling is that they did not receive enough support, such as access to grants to organise debates, to really have an impact among their constituents and among the other CSOs, that are not as focused on the EU, as organisations like Europuls are.

From my perspective, the European Commission did not make an effort to transform the civil society organisations into partners for the Conference. Through the CSOs, the EU would have had another impact at the grassroots levels, but they did not take this opportunity, and they left the CSOs to do what they could with the limited resources they have.

The COFOE would have been a great opportunity to establish a partnership between the EU institutions and civil society organisations across Europe. But I think this did not happen, unfortunately.