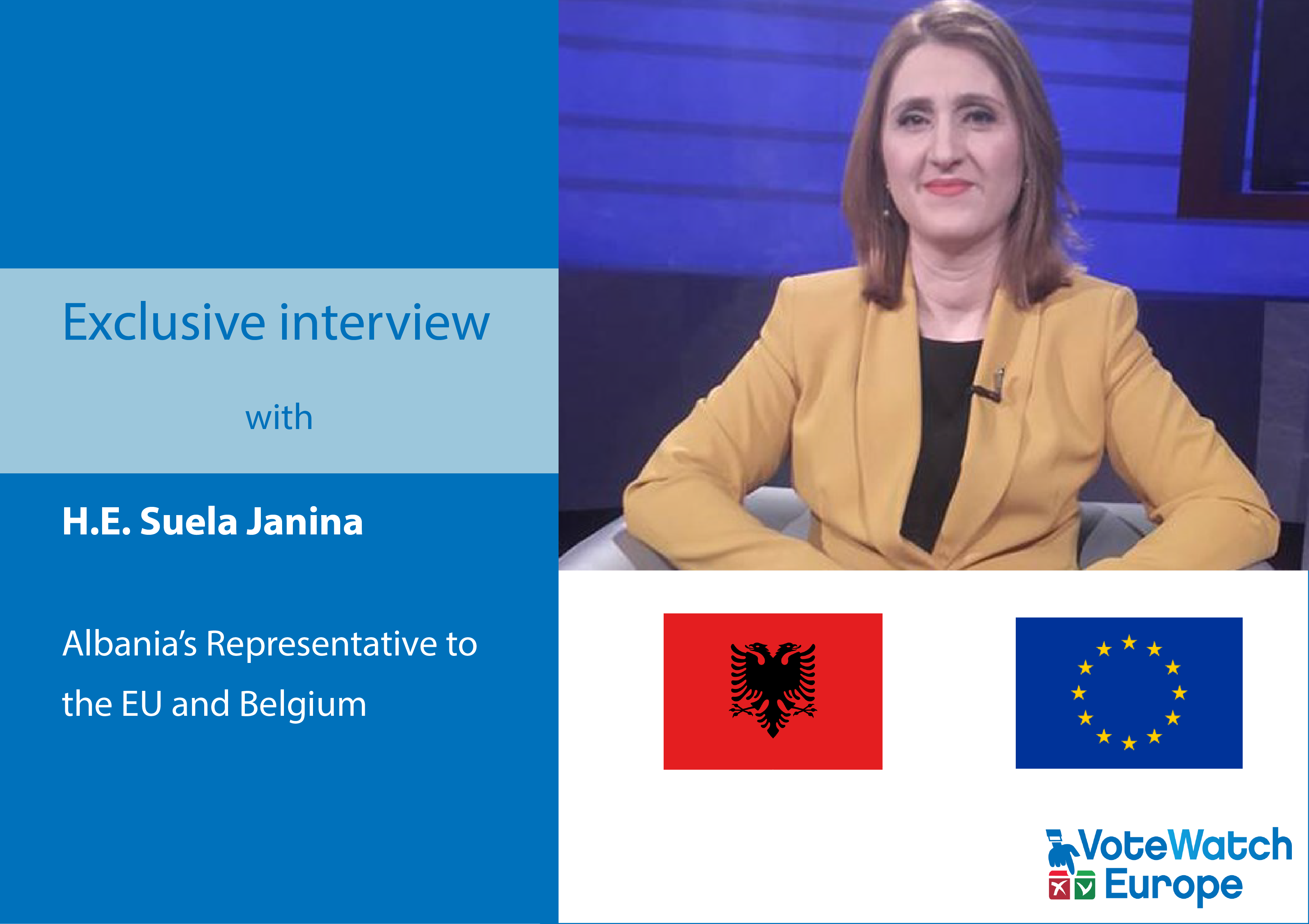 The recent acceleration in the Western Balkans’ path towards EU membership results from the window of opportunity opened by the Bulgarian Presidency of the Council, as the South Eastern country is highly supportive of the EU perspective of the region, due to the regional linkage they have. Indeed, after the 6-months Bulgarian Presidency, the Western Balkan region is back in the spotlight and is most likely going to stay in the center stage during the Austrian Council Presidency, starting at the end of June, since the country is also friendly to the region.

Among these countries, Albania hopes the EU Council will soon agree to kick-start the negotiations for Albanian accession to the EU. Lead since 2013 by a pro-European and pro-NATO Prime Minister, Edi Rama, the country has initiated reforms in the justice area and made progress in fight against corruption. Last April, the Commission put forward the suggestion of opening the talks for Albania’s accession.

In this key event of the next developments in the EU and EU-Albania relations, VoteWatch Europe was glad to have the opportunity to interview the Albanian Representative to the EU. Representative Janina, with a PhD degree in international law, is a career diplomat from Albania who has previously served in the Ministry of Foreign Affairs, and held the position of General Director for Multilateral Relations.

In this exclusive interview, Representative Janina has shared with us her views on the current EU-Albanian relations, the progress of the country towards its EU path, and the prospects of opening the negotiations for accession.

Check the full interview below to find out what is next for EU-Albania developments:

VoteWatch Europe: First, I would like to ask you what your impressions are over the past 6 months of Bulgaria’s Presidency of the Council. Did this presidency, considered as friendly to the Western Balkans, meet your expectations?

Representative Janina:  Coming to the end of this 6-months we can see the conclusion of a successful presidency of our Bulgarian friends, especially in relation with one of its most distinctive priorities, Western Balkans. The particular importance put on the enhanced engagement of EU with the Western Balkans, connectivity and digital agenda have been reflected also in the activities that the presidency has undertaken, including the important Sofia Summit. We appreciate their efforts to put Western Balkans high on the EU agenda and hope to see the results of these efforts to be soon concretized in bold steps of advancement of our countries towards EU.

VoteWatch Europe: Almost 15 years after the Summit in Thessaloniki, Bulgaria organized another EU-Western Balkans Summit in Sofia. Some Western media called the outcomes of Sofia Summit ‘’mitigated’’, what is your opinion of this?

Representative Janina:  The Summit of Sofia was a very awaited event, taking place fifteen years after the Thessaloniki Summit in which the European perspective of the region was highlighted. Although under different conditions in our region and changed dynamics within the EU, the outcome of the Summit is a good and hopeful message that our region’s futures lies within the EU. It also gave a sense of direction on further steps to be taken to prepare ourselves for the future membership and be engaged to address the common challenges we face together.

VoteWatch Europe: Albania has undertaken a substantial reform of the judicial system, among other reforms lately. According to you, what are the main domestic challenges that Albania will have to cope with to take a step forward in this accession process?

Representative Janina:  The justice reform that has been undertaken by Albania is in fact an unprecedented reform seen in the region. It is a very comprehensive and deep reform, and it started almost three years ago with the adoption of the constitutional and  legal framework. Now we are in the most crucial phase of it,  the implementation of the reform. So the challenges ahead will be to have a sustainable implementation of the reform that will not only give results in terms of numbers, but in terms of regaining public trust in the justice system, which has been one of the reasons the reform has been undertaken. Building a justice system that is accountable, professional and not influenced by the politics or other influences that damage its performance, is not only part of EU criteria related with the rule of law, but foremost a demand of Albanian society. We believe that the reform is now at the point of no-return. It is delivering the first results that are very meaningful, because they not only reflect growing numbers of prosecutors and judges vetted, but also at the top of the system it is really giving hope that the change can be possible.

VoteWatch Europe: The European Union is making regional stability a priority by emphasizing that regional cooperation is primordial to go further with the accession process. How are the relations between Albania and its neighbours? What are the remaining issues to tackle?

Representative Janina:  Albania is recognized as a very constructive and proactive actor in the region. It always has been, not only by actively participating in all regional initiatives, but also by trying to be a partner that invests continuously in good neighbourly relations with all the countries of the region. Indeed, the situation in the region has changed a lot compared to some years ago, and this is mainly because of the European perspective. Some good examples that can be mentioned in the region, give the sense of a positive momentum for the entire region, to leave divisions in the past and to look to the future. That future perspective of European integration is the glue that can keep our countries really connected with each other, and we have to consider that any kind of potential conflict damaging the relations can be an obstacle towards the EU path. So I believe that by showing this kind of leadership and interest to have excellent regional cooperation, we are showing that we are really determined to go through difficult processes that will, of course, be in the interest of our citizens and a better future for the region.

Representative Janina:  We hope and expect that the Council will give a positive message for Albania, by  endorsing the recommendation of the Commission to open accession talks with our country. As you know, in April the Commissioner presented a clear and unconditional recommendation for Albania, considering that steady progress has been made in 5 key priorities. The moment has arrived for Albania to make a further step towards EU membership. This decision that we are waiting for does not mean that we are ready for membership. It is only the start of a new more challenging and demanding phase, that will give motivation to further deepen and accelerate the reforms initiated in our country, to bring closer the country with EU standards. But we cannot forget that the decision in the Council will not be a technical but a political one, that will depend not only on the progress that Albania has achieved, but also on internal discussions that member states may have, their readiness to give this clear message. For us, as soon as possible would be better, as we need to have a confirmation that we are going in the right direction and clear up any obstacle that may slow down the pace of reforms. 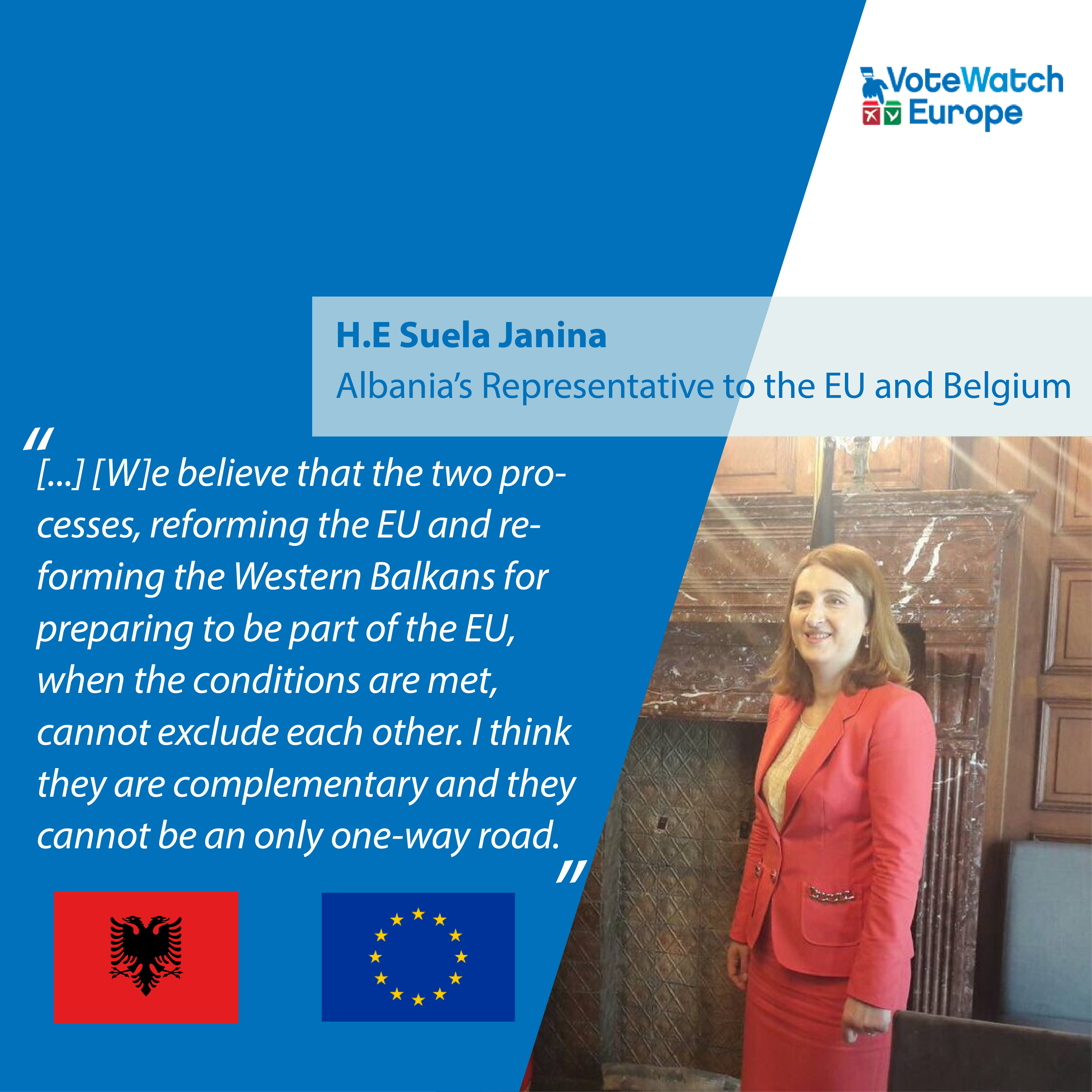 VoteWatch Europe: French President Emmanuel Macron commented on EU enlargement in Strasbourg, mentioning deepening and improving the EU, before considering a further enlargement. At the same time, however, he mentioned the importance of anchoring the Balkans and not let them drift towards Turkey or Russia. How do you perceive these comments?

Representative Janina: The reform of the EU is a process that has accompanied the EU from the beginning, and when it is done with leadership and vision is always positive.  We follow closely the debates and concerns about the future of the EU, as it goes without saying that we are interested in having a stronger EU, when time arrives to be part of the club. But at the same time, we believe that the two processes, reforming the EU and reforming the Western Balkans for preparing to be part of the EU, when the conditions are met, cannot exclude each other. I think they are complementary and they cannot be an only one-way road. I do not see how our progress towards the EU can damage the Union, the entire region’s progress towards the EU will strengthen the EU, not weaken it. 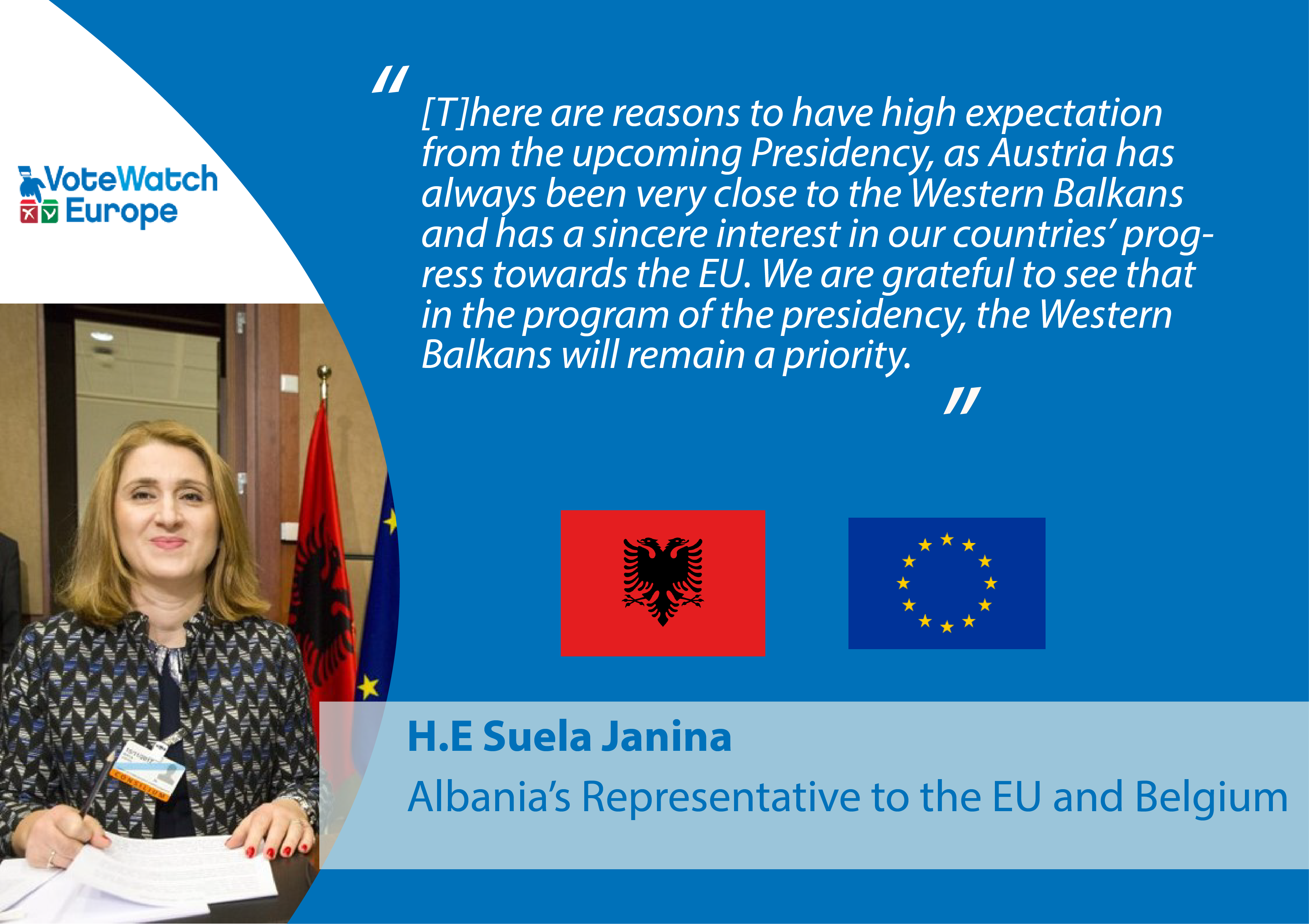 VoteWatch Europe: The Austrian government will take over the next European Council Presidency at the end of June. What do you expect from PM Kurz, with regards to the Western Balkans?

Representative Janina: Indeed, there are reasons to have high expectation from the upcoming Presidency,   as Austria has always been very close to the Western Balkans, and has a sincere interest in our countries’ progress towards the EU. We are grateful to see that in the program of the presidency, the Western Balkans will remain a priority. We are very eager to cooperate with the Austrian government, not only in the field of enlargement or EU integration process, but also in the field of managing the common challenges that our partners and we will have in the future. There will be also activities that we will organize with the presidency, one of which will be the Justice and Home Affairs Ministerial to take place in Tirana, in October this year.

VoteWatch Europe: Albanian citizens are by a large majority favorable towards the European Union. How does Albania perceive the rise of Eurosceptic movements across the EU?

Representative Janina:  Euroscepticism in Albania does not take place. Sometimes, when I talk with my colleagues, we said that this is a word that you cannot find in an Albanian dictionary because for Albanian people, the EU remains the only project, for our future. So sometimes it can be seen not geographically correct, but you may have heard that for Albanians the sun rises from the west, something that is the expression of our European vocation. But at the same time we need to cherish and protect this asset that we have in the country, and this can only be done by showing to the Albanian people that they have a clear perspective, although the way to the EU will not be easy, but that it is worth of all efforts. That is why it is important, at this moment, to show that their place will be in Europe and that all the reforms that our country is going through will really be worthy, because the effects it will give to the Albanian people will soon be visible. At the same time, we see the rise of Euroscepticism as a matter of concern, but I am quite sure that Europe will find the wisdom and the force to, with arguments, convince its citizens that EU and the project which created this Union is more necessary than ever. It should be protected, it should be developed, and it should be the only project that can secure the peace, freedom, and prosperity of the entire continent.