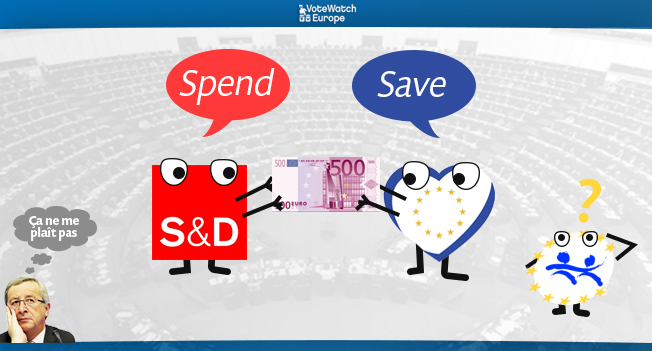 EU’s economy is still not doing great and new measures need to be taken to unleash its enormous potential, this is what the Members of the European Parliament agree on. They also agree that the EU should take a more active role to coordinate the economic policies of the 28 EU Member States. However, for the time being, they have very different opinions of what those policies should be.

The left and the right in the EP have failed to reach a compromise on a very important document that was supposed to set out Parliament’s position with regard to the yearly assessment of the macroeconomic policies of the Member States. As a result, the resolution put forward for adoption was in fact rejected, leaving the EP with no position at all. This means that, for the time being, there is no political backing in the Parliament for the Commission’s macroeconomic policy initiatives. The absence of an EP official position does not prevent the Commissions from going ahead with its recommendations, but it significantly weakens its leverage vis-à-vis the Member States, which are the ones expected to implement these recommendations.

The two main political groups found themselves at odds as regards what should be the priorities in the annual Country-Specific Recommendations (CSRs). The Socialist (S&D) group, which is also the political family of EP President, Martin Schulz, refused to pull its weight behind the position of the Commission, which it found as being too free-market oriented. Moreover, the S&D Members were unhappy with the role of the Eurogroup, questioning its legitimacy to take EU level decisions, as its members are not directly accountable to the citizens. On this point, the Socialists were joined by the Liberals (ALDE), which allowed them to form a majority, much so to the disappointment of the conservative groups (EPP and ECR). Conservative politicians defend the Eurogroup, as in their view those institutions that need to make unpopular, but arguably necessary decisions, such as cuts in the public spending, need not be too sensitive to the shifts in public opinion, or otherwise their Members would feel too vulnerable and hesitate to make tough decisions.

The position of the liberal ALDE group deserves a separate note, as it is more circumstantial/tactical, rather than purely ideological, and therefore took the EPP and ECR by surprise, leaving these groups in minority. ALDE politicians are in favour of budget discipline, but those serving in the European Parliament, under the leadership of the very charismatic and Commission Presidential-hopeful Guy Verhofstadt, feel that they have been left out of the game, as they have no say in the Eurogroup.

The implications of this vote go much deeper, as it showcases certain states of facts in Europe. Firstly, that there are divisions all over the Union on what the best economic policies are, i.e. whether the focus should be more towards budget discipline (or austerity) or more public spending. These divisions take place not only between Member States, as some commentators oversimplify it, but also within almost every Member States, between different ideological factions (Socialist MEPs from all Member States vote for more public spending, while centre-right MEPs from all Member State vote for keeping the budget discipline). See for example the breakdown of votes on amendment 10 to this report, which called for a radical shift away from austerity:

This amendment was adopted by a margin of only 10 votes, and one can argue that the difference was made by the fringe groups EFDD and ENF, which shows the disproportionate leverage that these forces can have when the centrist political families are split. In the previous Parliamentary term, an EPP+ECR+ALDE coalition would have been enough to control a majority, but this is no longer the case after the May 2014 EU elections.

This cleavage between proponents of more public spending versus the defenders of budget discipline is, obviously, not isolated among the politicians alone, but it simply transposes into the EU political arena the cleavage between parts of the society: defenders of budget discipline (or austerity) argue that the accumulation of public debt is detrimental, as this will result in tax payers having to pay more to the state to cover for this debt, which reduces competitiveness and thus hinders economic development.

On the other hand, cutting public spending hits especially the disadvantaged categories that benefit from social programmes and those benefiting from various types of public subsidies. For this reason, it is easy to expect an emotional reaction from the society against such measures, which can easily be used by politicians to build political capital on.

From an institutional perspective, this vote also mirrors the existing divisions within the European Commission, which is composed itself of commissioners that have different political upbringing. At the beginning of its term, President Juncker has tried to set the stage for a compromise between the two main parties, by effectively appointing both a Socialist and a People’s Party representative in charge of the economic affairs, in the persons of Commissioner Vladimir Dombrovskis (EPP) and Commissioner Pierre Moscovici (S&D). However, that doesn’t seem to have made things easier, since the Socialists in the European Parliament still do not approve some of the economic plans of the Commission.

Polish centre-right MEP Dariusz Rosati saw his report rejected by a large majority in the EP’s plenary, as at the end of an unusually tense voting session both the left and the right were very unsatisfied with the resulted text (each side was unhappy with its amendments being rejected): the motion was rejected by 91 votes in favour, 409 against and 131 abstentions.

The votes in favour came only from a minority of EU People’s Party Members and from a few Liberal MEPs. The internal split within the EPP group, which is otherwise a very cohesive group, and even within the same national delegation (German CDU/CSU delegation was itself split down the middle), surfaces the confusion that must have reigned among the MEPs, who seem to have been taken by surprise themselves by this turn of events.

However, this is not an isolated event. At the beginning of 2015, the political factions were unable to find a compromise on the Commission’s working programme for 2015, after a similar chain of events in the voting session occurred. These occurrences in the European Parliament show the very thin balance of power between the two sides at EU level. These events also add to and explain some of the paralysis that the EU is experiencing when having to take swift and coordinated action in dealing with the economic challenges, such as the Greek crisis.

The election of Jean Claude Juncker as President of the European Commission after a “classical” race between candidates may have been helpful for increasing the EU’s (and Commission’s) leverage. However, the fact that he needed bipartisan support (EPP+S&D, and even ALDE) already limited his margin of manoeuvre, at least on economic policies where the two parties have entrenched disagreements. The lack of a strong EU executive who would be backed by a clear political majority in the European Parliament, alternating from the centre-left to the centre-right and the other way around, makes things very difficult to manage by the Commission and thus weakens its leverage. Consequently, there is more space and incentives for using alternative decision-making bodies, such as the Troika or the Eurogroup. These are more flexible and easy to manoeuvre with, but at the same time less accountable to the EU citizens, a state of facts which can be used to further undermine the trust in the EU as a whole.

For questions or comments, contact me at [email protected].