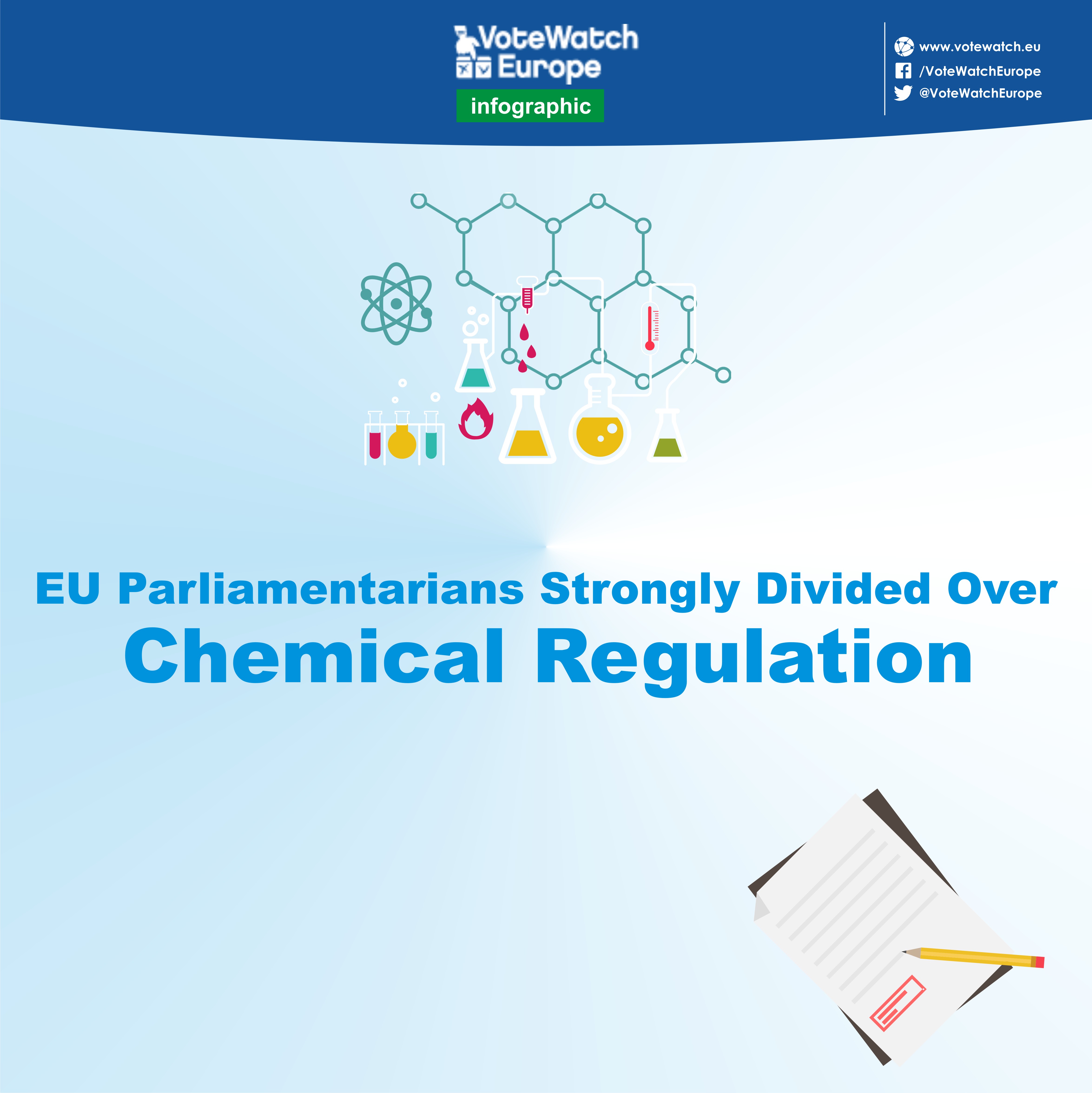 Chemicals are everywhere in today’s society, ranging from the food we eat to the clothes we wear and the European Commission actively proposes regulation in this field. However, the final decisions by the European institutions are also based on political considerations, in addition to the technical assessments. The European Parliament plays a big role on regulation of chemicals as it can allow or block the authorization of these products. The EP is made up of over 200 parties with very different agendas and views, which makes it very difficult to follow its work and forecast its decisions.

In order to guide stakeholders through the decision-making process in this area, we tracked the positions of all the Members of the European Parliament (MEPs) on key votes that decided the fate of chemicals. This mapping also offers important clues about the position of the 28 EU governments, as in most cases there is coordination between the government and the position of the MEPs coming from the parties in power at national level.

Notably, this is not a survey: we took into account the actual actions undertaken by politicians (the way they voted), not opinions or carefully crafted statements. This methodology is much more accurate than a regular survey as it takes into account every single Member of the European Parliament (not just a sample) and filters out the possibility of misleading answers.

If you have questions or you want to obtain the full dataset, do not hesitate to contact us at [email protected].

Regardless of the benefits they bring to the consumers, chemical products have to be regulated in order to prevent any harmful effect on the people or the environment. Therefore, every policymaker is, in principle, in favour of regulating these technologies.

However, there are disagreements regarding how strict or extensive these regulations should be. On the one hand, some policy makers argue that a product should not be used until it is proven safe: this is known as the precautionary principle. In this way, consumers are prevented from using potentially dangerous products.

One the other hand, critics point out that a strict application of the precautionary principle is preventing consumers from accessing potentially beneficial technologies, whose further improvements would also be harmed by unnecessary red tape. Some policy makers are more supportive of the “innocent until proven guilty” principle, which means that the product is considered to be safe if so assessed by the industry, until proven otherwise.

Differently from the United States, the EU is keener on applying the precautionary principle, whenever there is uncertainty over the harmfulness of a certain substance. This is particularly important, as the debate over the impact of certain products on the health of the consumers, such as GMOs, nanotechnologies or certain pesticides is still ongoing and it features heated controversies between contradictory findings by researchers. In the EU, the discussion focuses on whether the precautionary principle should be applied strictly or flexibly.

However, policymakers often think in political terms, as the interests and policy preferences of their constituents are more influential in driving decision-making than the scientific findings on the properties of certain substances (which are often interpreted differently by different politicians).

For this reason, VoteWatch Europe assessed the views of MEPs with regard to regulation of chemical substances in order to find out who is more favour of a precautionary principle and who, instead, is endorsing an “innocent until proven guilty” principle. We focused on 5 key votes which allow us to spot the main differences among the many political players within the European political landscape. They concern the evaluation of plant protection products, the approval of the substance bentazone, the authorization of genetically modified maize products, the use of nanotechnologies in food production and the banning of Bisphenol A in all Food Contact Materials.

Maltese, Austrian and Greek MEPs are the most supportive of a strict application of the precautionary principle

The political analysis reveals that, on average, Southern MEPs, such as Maltese, Greeks, Italians, Cypriot, Austrian and French MEPs are strongly supportive of a strict application of the precautionary principle. This means that they are more in favour of banning certain products in case there are doubts regarding their safety. At the opposite side, a more looser application of the precautionary principle is strongly supported by most Polish MEPs, as well as several Czech, Slovakian, Dutch and British EU politicians. 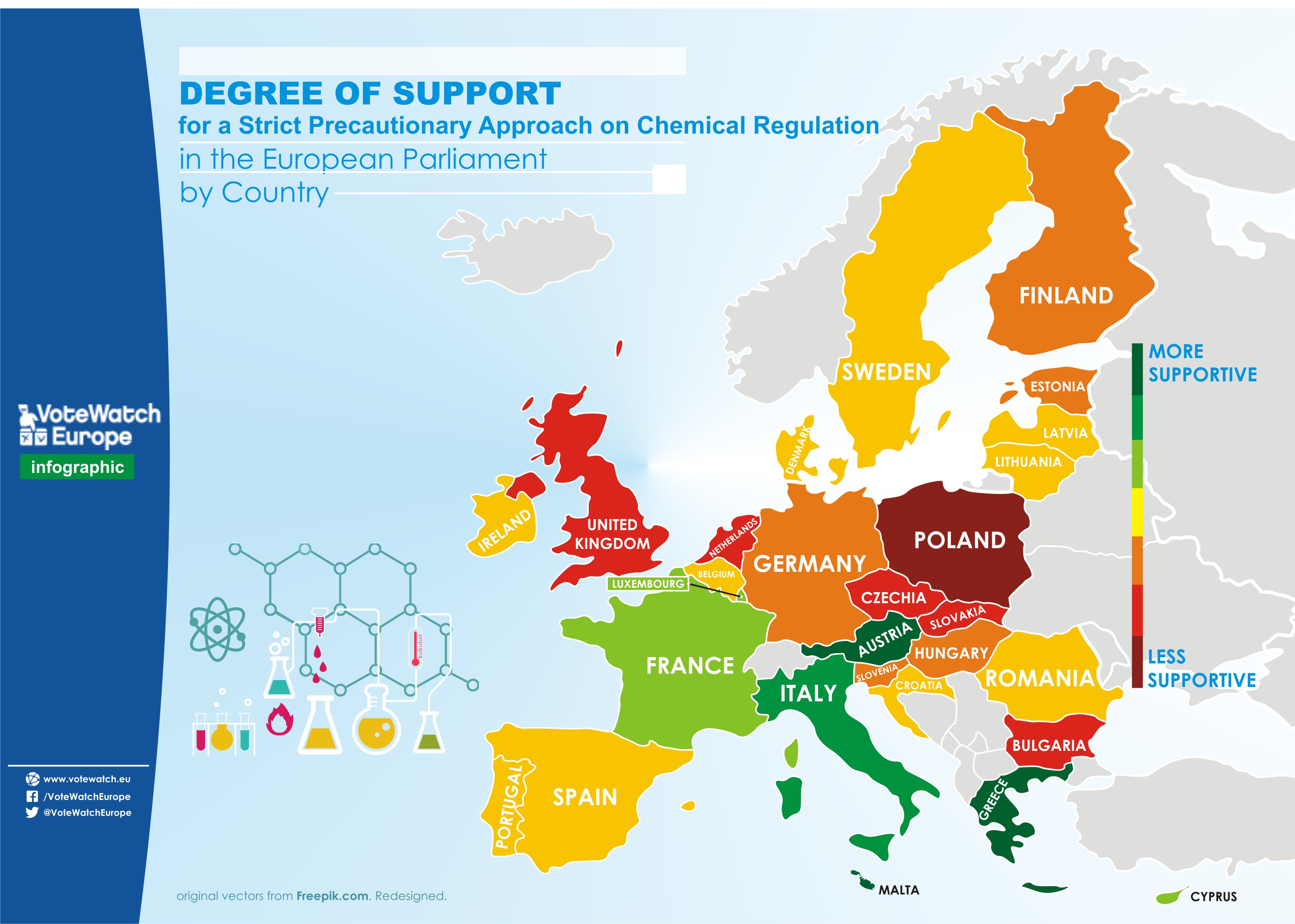 When looking at this within the EP political groups a strong polarisation becomes visible. On the one hand, a coalition made up of left-wing political groups (S&D, Greens/EFA and GUE-NGL), as well as the far right (ENF and some of the independents) is pushing for a strict application of a precautionary approach. On the other hand, EPP and ECR are, comparatively, less supportive of a strict application of the precautionary approach. The Liberal ALDE is close to the centre of the political spectrum when it comes to chemical regulation and some of its members can act as kingmakers in order to swing the outcome of a vote. 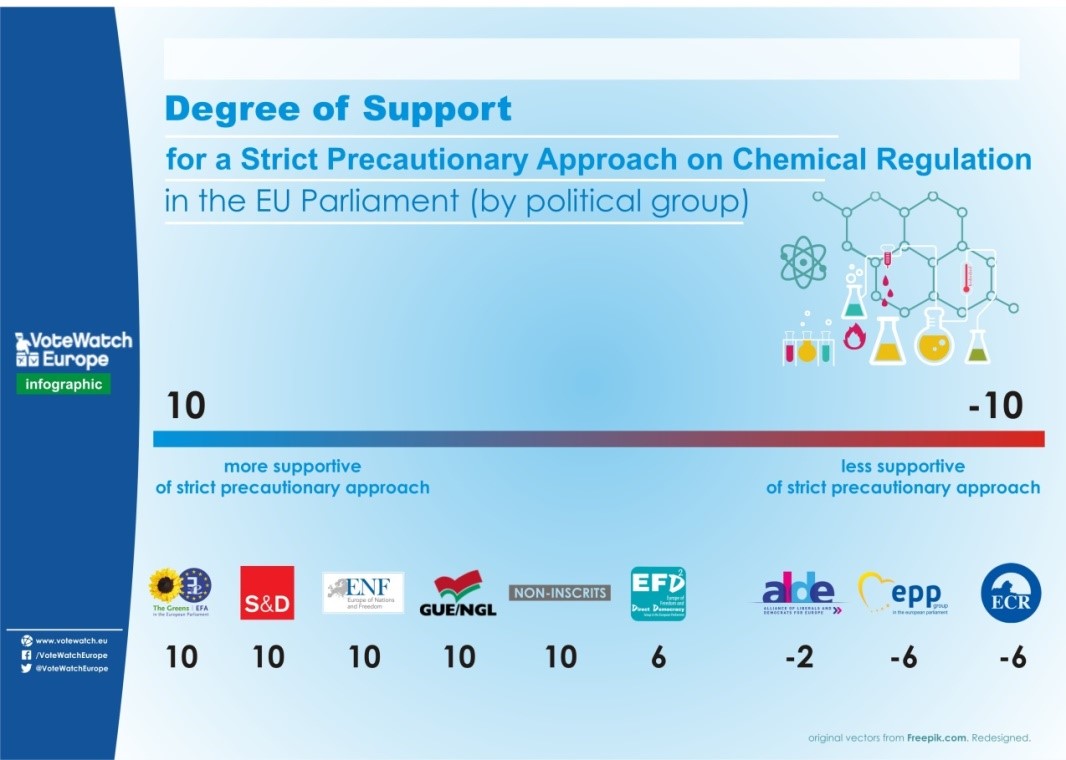 Importantly, there are strong internal differences within the largest political groups. In the EPP, the Belgian Humanist Democratic Centre is the most supportive for a strict application of the precautionary principle on chemical products. In this respect, the party is closer to the left than the other members of the centre-right group. On the other hand, the two Swedish members of EPP, Moderaterna and Kristdemokraterna, are less keen on applying a stringent precautionary approach when it comes to chemical regulation. 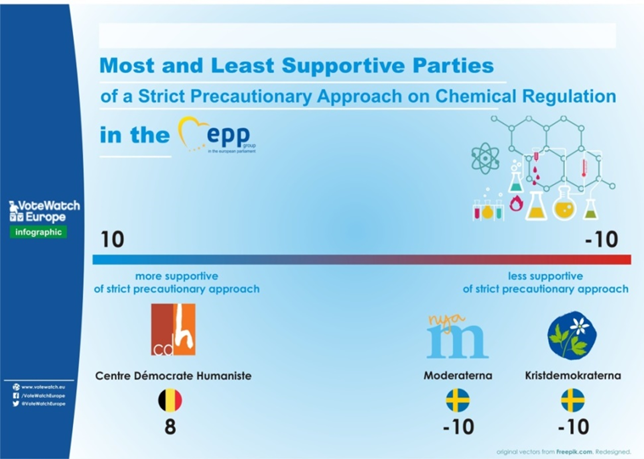 Who holds the switch on EU’s energy policy in the Parliament?

Tints of Green: Who Influences Environmental Policy in the European Parliament and How?

What is there in your dish? Regulation of nutrition choice divides EU policymakers

Powerful but Divided: The EU Parliamentarians Who Influence Digital and Telecommunication Policy

Annex I: List of votes used for the assessment

Annex II: Positions of a sample of MEPs on chemical regulation