Home Votewatch » The politics behind EU’s economic policy: which way forward during the 2017 electoral year? 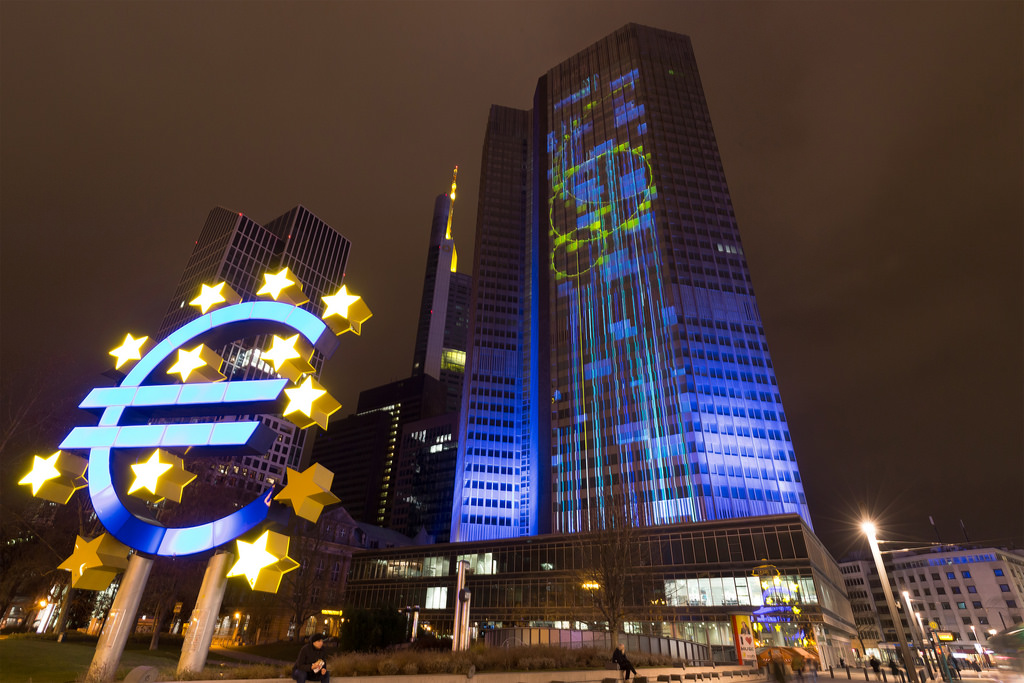 The electoral cycle starting with the Dutch elections this week will be key in defining the future economic policy of the Eurozone. Although Brexit and Trump caught most of the media’s attention over the past year, the problems inherent to the current Eurozone’s system of governance are returning to the spotlight as the White Paper on the Future of the EU has been open for debate.

What will happen to the Banking Union project? Will the EU finally be able to coordinate macroeconomic policies and infer more budget discipline on the Member States? Will the push for tax harmonisation find enough support? Will the ECB be pushed into an early termination of quantitative easing or a hike of interest rates?

This report maps the level of political backing for reforming the EU’s economic policy and shows what are the likely scenarios that can unfold this year, taking into account electoral events in Germany, France and other countries.

The political developments in each Member States impact directly on the fate of the common monetary area. The positions of the governments are strongly shaped by the type of governing coalitions that take power, as different politicians can have very different views on which direction is best for the EU’s economy.

Therefore, who gains and loses the power (and how much of it) in the governments in Berlin, Paris, Rome, Madrid and elsewhere on the continent is a better predictor of the future economic policies than the economic reports per se, as the reports are often interpreted in a way that fits political agendas.

What can we expect to happen over the next year?

In this article, we try to forecast the upcoming developments by looking at the positions taken by leading national political forces on key issues such as the role of the European Central Bank (ECB), the completion of the Banking Union, or the establishment of a fiscal capacity for the Eurozone. While a majority of EU parties in government currently endorse the ECB’s unconventional monetary policy, they remain divided when it comes to the direction of the European fiscal policy and Eurozone’s governance. These are our main findings:

–Most current parties in government oppose a softening of the EU budgetary rules, although increased political volatility and potential anti-EU backlashes will reduce the margin of maneuver of European Commission to use its disciplinary powers against non-compliant Member States.

–German elections will be key in determining whether a financial capacity for the Eurozone can be established. A strong performance of SPD would lead to a German Executive more prone to accept such an initiative, in particular if this event will be coupled with a victory of Macron in France. However, building a Eurozone budget would notably lead to a clash with non-Eurozone Member States, which do not want to be marginalized. Furthermore, we can expect the remit of this new financial capacity to be narrow, given the concerns of leading Nordic political parties about the introduction of moral hazard.

-A victory of the left in Germany would reduce some of the pressure on Mario Draghi to stop the quantitative easing before the end of the year, although inflation could rise as fast as to ultimately drive things in the opposite direction.

–Efforts to limit the amount of public debt held by financial institutions will still meet the opposition of most Member States and this opposition will be even stronger when the ECB will curb its expansionary policy. This also means that other solutions have to be found in order to break the “doom loops” in certain Eurozone’s economy (vicious circles in which the weakness of financial institutions drags down their governments and vice-versa).

–Other initiatives aiming at solving the problems of the banking system, such as the creation of an European “bad bank”, are opposed by German policymakers. In this regard, it is difficult to expect much progress on this matter before the next German elections. However, the establishment of a deposit insurance scheme would be more likely to be accepted by an SPD-led administration than the establishment of a bad bank.

There is a rather wide consensus among political parties at the European level on the need to respect the budgetary rules, which state that Member States’ fiscal policy should stay within certain limits on budget deficit and debt.

However, precedents show that divisions occur when it comes to making room so that some governments can bypass these rules when it becomes too inconvenient to follow them. For example, the political elites of some countries, especially in Southern Europe, would like to exempt public investments from budget discipline rules. This is not acceptable to politicians from the other Member States, as the infograhic below highlights. 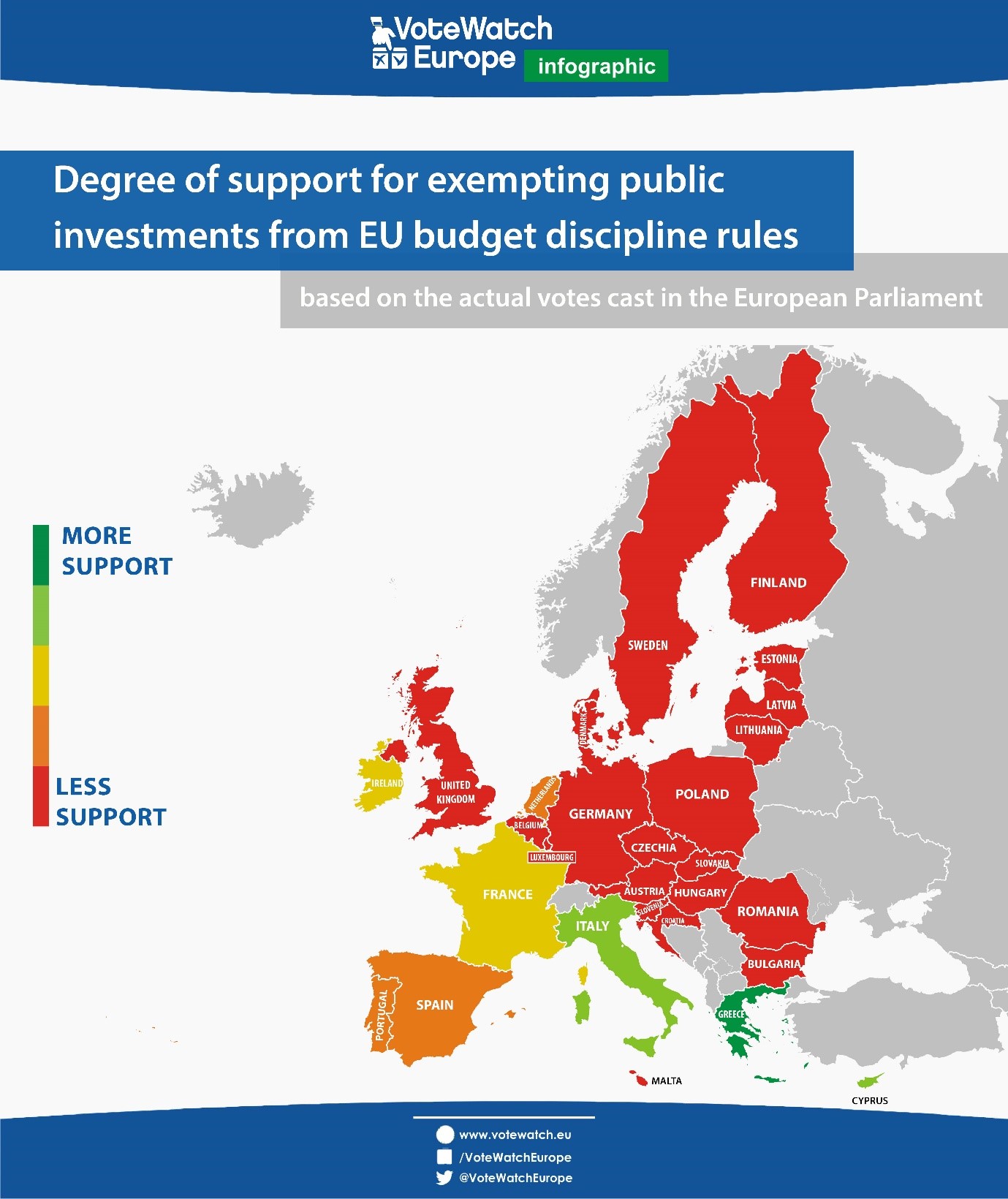 The measure is endorsed mainly in countries with a higher government gross debt (Cyprus, Spain, Portugal). This is particularly the case in Greece (debt of 177% of GDP), where the far-left party Syriza (in power in Athens) favours public spending policies. However, further flexibility on budgetary rules is opposed by several Eurozone’s policymakers, in particular by the Germans (with the exception of their Green and the far-left parties).

In Italy, support for public spending remains based on ideological lines. On the one hand, some parliamentarians of the Democratic Party, in power in Rome, have endorsed the exemption of public investments of EU budgetary rules, as well as the eurosceptic Beppe Grillo’s 5 Star Movement, the main Italian opposition party. On the other, right-wing Forza Italia, currently in opposition, opposed budget flexibility.

Similarly, in most European countries, the support for public spending policies is different among the political parties. For instance, in France, both Marine Le Pen’s National Front (FN) and Jean-Luc Mélenchon’s Left-Front endorse increasing public spending. Although these two candidates for the French presidency are not likely to win the elections, the fact that they promote such policies and they get significant electoral traction puts substantial pressure on the French government and the European institutions, who are worried about the increasing political volatility across the continent: forced compliance might further strengthen the opposition to the Eurozone and this prevents the European Commission from being too hawkish on the respect of budgetary rules.

Public debt woes have to be addressed again

In March 2015 the European Central Bank (ECB) has launched a quantitative easing programme to increase investment and return inflation to its 2% target. Mario Draghi’s accommodative monetary policy has been widely endorsed by the European Parliament, even though there have been dissidents in the Angela Merkel’s political party and reluctance in Finland. Most German politicians tend to disapprove the ECB’s unconventional policy, fearing that quantitative easing would lead to hyperinflation.

However, there are relevant differences: the Social Democratic Party of Germany (SPD) is more in favour of ECB’s unconventional policies than the centre-right Merkel’s Christian Democratic Union. If former European Parliament president Martin Schulz wins and is appointed Chancellor in after September federal elections, the next German government is likely to release some pressure that is currently exerted on ECB to stop quantitative easing.

However, the rise of inflation might ultimately drive Mario Draghi into scaling down the expansionary policy of the ECB, which would result in putting a further strain on the public finances of Southern Member States. In Southern countries, the problem of the public debt is inherently linked to the weakness of the banking system. As Italian, Greek and Spanish banks are overexposed to the sovereign bonds of their own country, insolvencies of banks generate a “doom loop“ of ever deteriorating public and banking finances. Member States are trying to solve this problem through the Banking Union.

However, divisions between countries on the measures to be adopted remain high. Once again, national positions are dependent on the economic situation at home. The proposal to limit the exposure to sovereign bonds by financial institutions are strongly opposed by the political parties from Member States where domestic banks hold a high share of the sovereign debt, such as in Malta, Cyprus, Greece, Portugal and Italy. 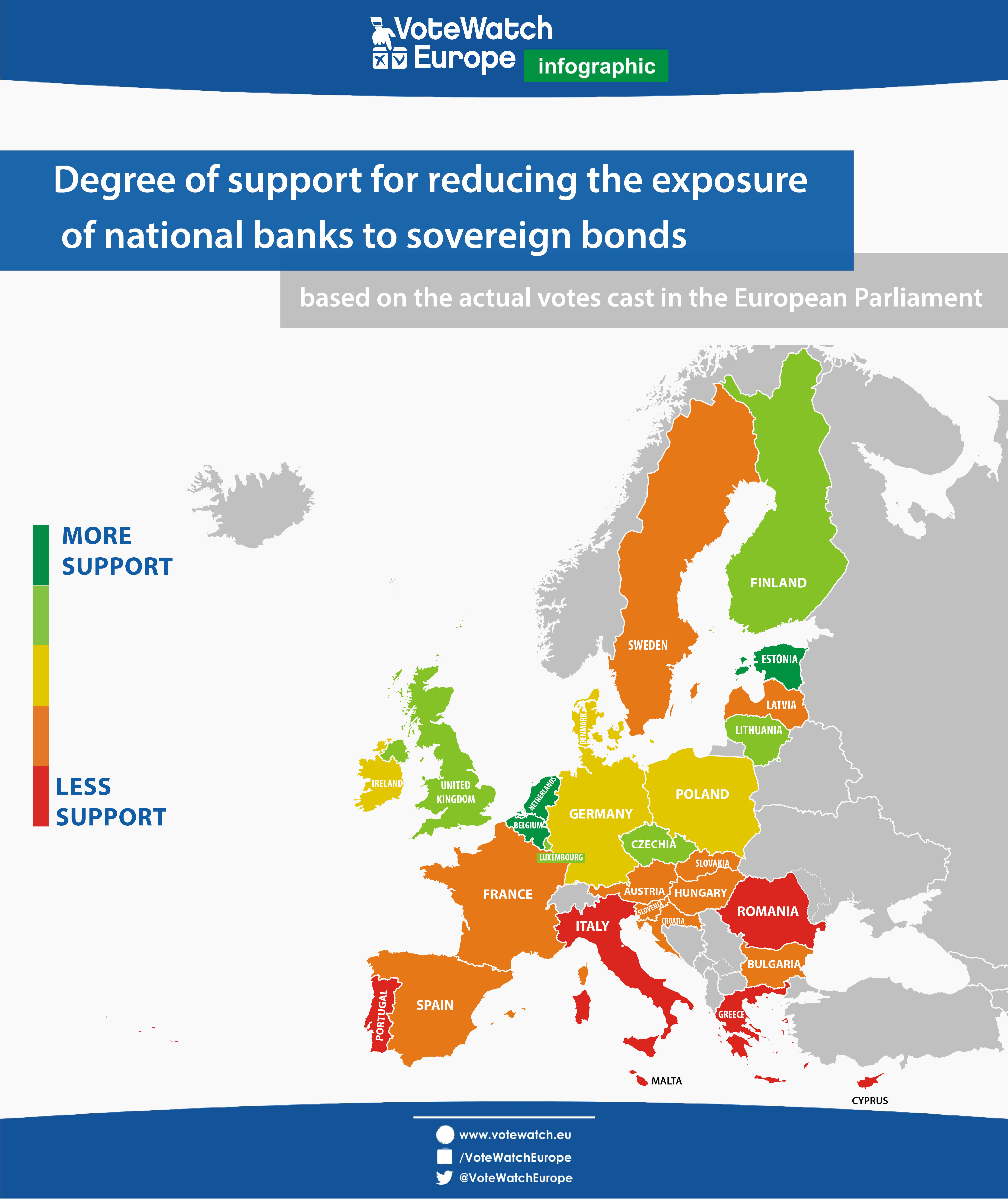 The potential appointment of Martin Schulz as next German Chancellor would change the balance of power on this issue, as his party is against lowering the value of government bonds of indebted countries, which are arguably being kept artificially high in some Member States. This could unlock the current situation: some Northern countries oppose the establishment of a European deposit insurance scheme, unless some governmental bonds are considered as risky.

Instead, it seems unlikely that the next German government, regardless of the result of the elections, will open to the establishment of a European bad bank in charge of taking over the non-performing loans held by the banks: while CDU politicians do not want taxpayers to pay for rescuing banks in other Member States, SPD’s leader Martin Schulz is opposed in principle to use the public money to bail out banks.

The strengthening of the Eurozone is not consensual

Finally, the debate will also touch upon the strengthening of the Eurozone’s system of governance and, in particular, on the establishment of a budgetary capacity for the Eurozone. Things could be unlocked after this super election year, with developments in France and Germany. Both French presidency candidates François Fillon and Emmanuel Macron back the strengthening of the Eurozone. In Germany, the increasing weight of the SPD in polls could overcome the split in Angela Merkel’s party, CDU/CSU.

However, there is still considerable opposition to this kind of proposals. As shown by our map below, political parties from Eurozone’s Member States such as the Netherlands, Ireland and, to some extent, Finland are skeptical about the establishment a budget for the Eurozone. Additionally, non-euro area countries are reluctant to accept a budget for the Eurozone, fearing to be marginalised in the European Union’s system (for a deeper analysis on the support for an Eurozone’s financial capacity check our special report). 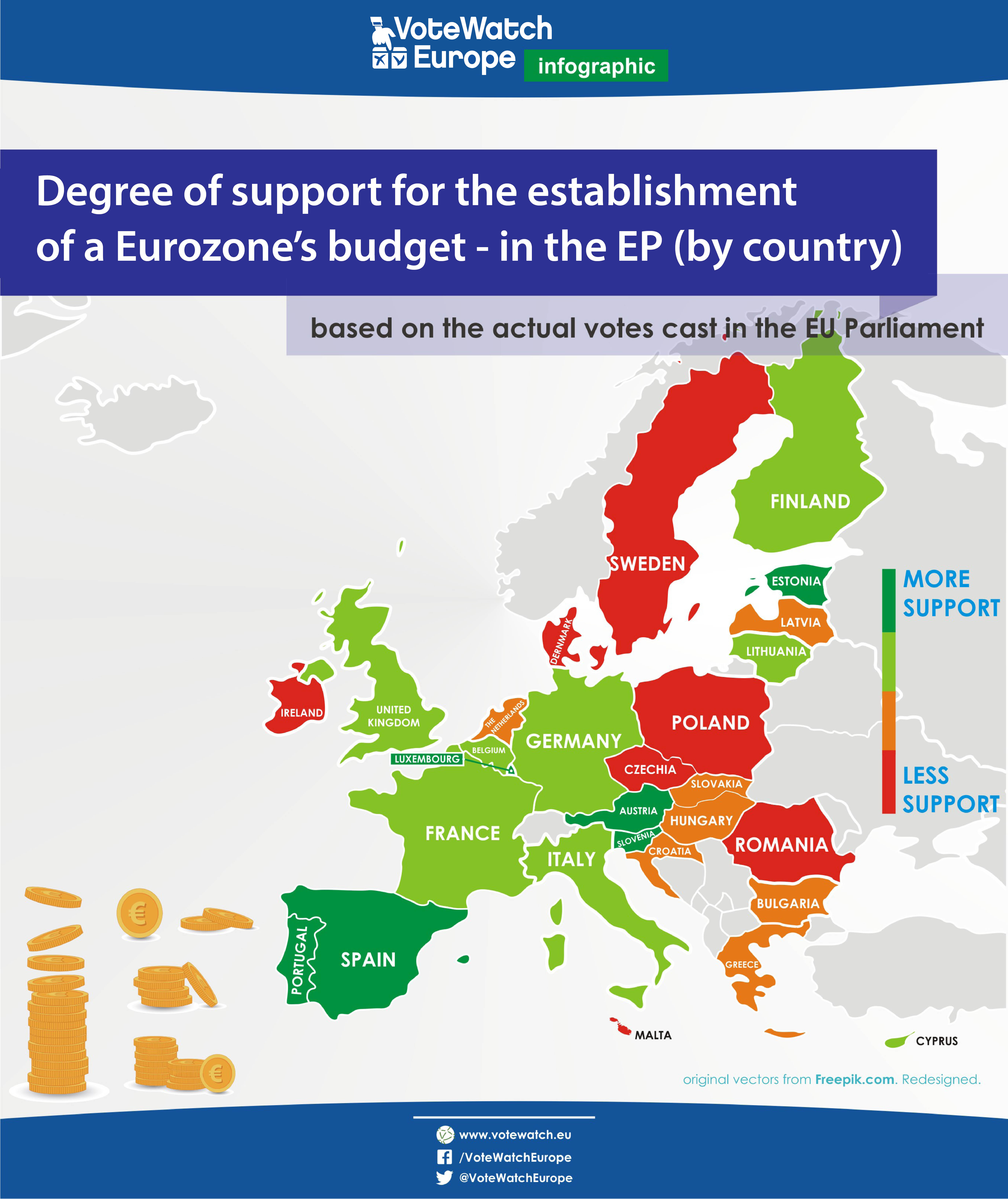 Because of these divisions, we would not expect a far-reaching initiative in this regard to be adopted soon. If a new financial capacity for the Eurozone were to be established, its remit will be narrow and the conditions to access the funding will be strict. Only in this way, the concerns of Nordic Member States about moral hazard, as well as the fears of Central and Eastern policymakers about being marginalized, can be assuaged. It seems at this point that only a limited and gradual approach can work, before a broader political support is built around these projects across the Union.

For more analysis and political data contact us at [email protected]