Home Votewatch » Czech Elections 2017: Exclusive Interview with Pavel Poc (ČSSD – S&D)
Pavel Poc, member of the Czech Social Democratic Party (S&D), is the fourth most influential Czech MEP in the VoteWatch influence assessment. Former biologist and policy expert on environmental issues in Czechia, Poc is is one of the Vice-Chairs of the Environment, Public Health and Food Safety Committee. Because of his commitment to environmental protection, Poc chairs the “Climate change, sustainable development and biodiversity” intergroup. Apart from his activities on environmental issues, he also heads of the Czech delegation in S&D. He drafted a report on regulating novel foods. 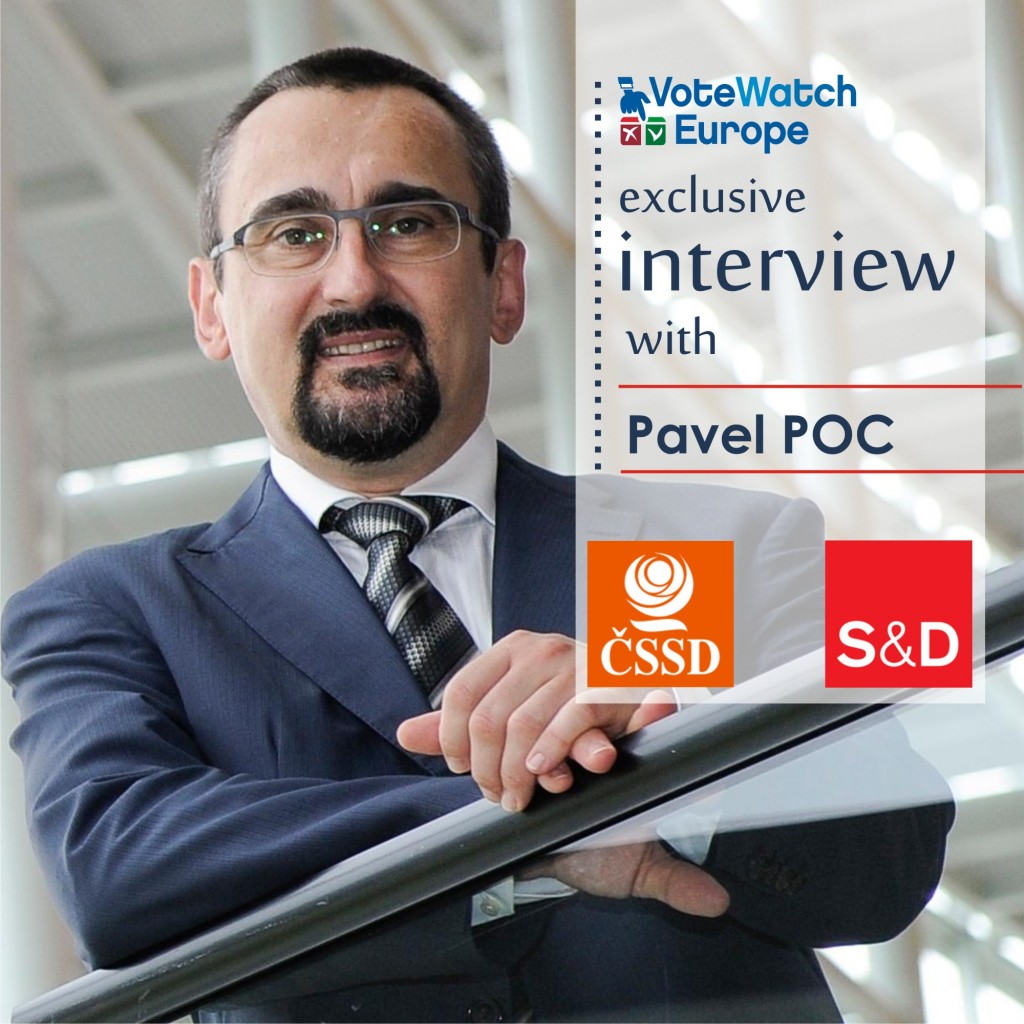 VoteWatch Europe: Mr. Poc, you have been representing Czechia in the EP for 8 years already, how would you describe the CSSD delegation’s work in the current term?

Poc: It is a completely different game. Our party was in opposition during the previous term, while we are now a ruling party for most of the current government. To support the policies that are particularly relevant to our region in the S&D group, we focus from the very beginning on the work in the committees. Just to mention some agenda we are dealing with – energy policy, food safety, the different quality of food products in the Single Market. When it comes to our role inside the S&D group, it is not always easy to defend some particular positions of the Czech government, but we are doing well here too. Despite the fact that we are a smaller delegation compared to the last term, our work is today better structured, and, as a result, more productive.

VoteWatch Europe: As Vice-Chair of ENVI committee, what strategy do you think EU should adopt with the aim of countering climate change?

Poc: Time is running out fast and the planetary-scale environmental mitigation policies are becoming less and less effective because of the rather formal nature of international cooperation. The adaptation is, therefore, our best chance to effectively minimise the expectable impacts. Our civil protection mechanisms need to be in place, we need to think about the consequences of changing climate, including the movement of large masses of people. We need to strengthen the resilience of our agriculture, energy and transport sectors. The problem needs to be tackled horizontally, in every policy sector. Adaptation measures to the COP 21 agreement have to be mirrored in the European Fund for strategic investments (EFSI) and in the EU budget in general.

VoteWatch Europe: As a Czech MEP, do you see a consolidation of the Visegrad group as a way to strengthen the leverage of your country in EU politics, or would you rather see Prague as a possible mediator between Western Europe and Central and Eastern Europe?

Poc: I am not a fan of any grouping inside the EU. As you mentioned, Prague is “in the middle” and its role as a mediator could strengthen much more the position of my country, when embraced properly.

VoteWatch Europe: The Visegrad countries have very different positions with regard to Russia: while Poland wants the EU to keep a safe distance from our Eastern neighbour, Hungary doesn’t shy away from displaying friendlier relations with Moscow. How does a former member of the Delegation to the EU-Russia Parliamentary Cooperation Committee see the future relationship scenarios between Czechia and Russia after the upcoming legislative election?

Poc: To be frank, there is, in my opinion, no balanced relation possible between any small countries, including Czechia, and the Russian bear. Those who are playing with such an idea can only repeat history. The only chance to deal with Russia “pari passu” is to develop relations through a common foreign policy within the EU. There are two conditions to achieve this. Russia has to recognize the EU as a genuine union, instead of approaching member states individually and to play tricks on them in turn. The EU, on the other hand, has to take a more sovereign but not threatening stance to Russia.

Poc: I believe the EU is cooperating adequately with China, based on its mandate and considering the current political environment. We ought to keep in mind that China is not an equal partner to the EU when it comes to workers’ rights and the status of its citizens. Consequently, it is essential that the EU keeps its economic interests firmly in mind when dealing with China. If there are not the conditions for Market Economy Status (MES), then no MES should be granted. If there are unhealthy goods exported, protective mechanisms have to be activated. Any cooperation must be, in principle, reciprocal, otherwise, it is not cooperation.

VoteWatch Europe: In 2016, the Czech president, Milos Zeman, had called for a referendum to decide the country’s EU and NATO membership. How do you forecast the future of the Czechia’s membership in both these blocs after the legislative elections?

Poc: I am not entitled to comment on political declarations of the Czech president. Necessary constitutional mechanisms were fully implemented by the Czech Republic when it enters both the EU and NATO. It is in the interests of the Czech Republic to belong to both the EU and NATO and I do not think that the upcoming legislative elections will change anything in the current state of affairs.

Click here to follow the activity of MEP Pavel Poc. He is also the 4th most influential Czech MEP in the European Parliament. Find out who shape the power in the European legislative by reading our influence assessment.