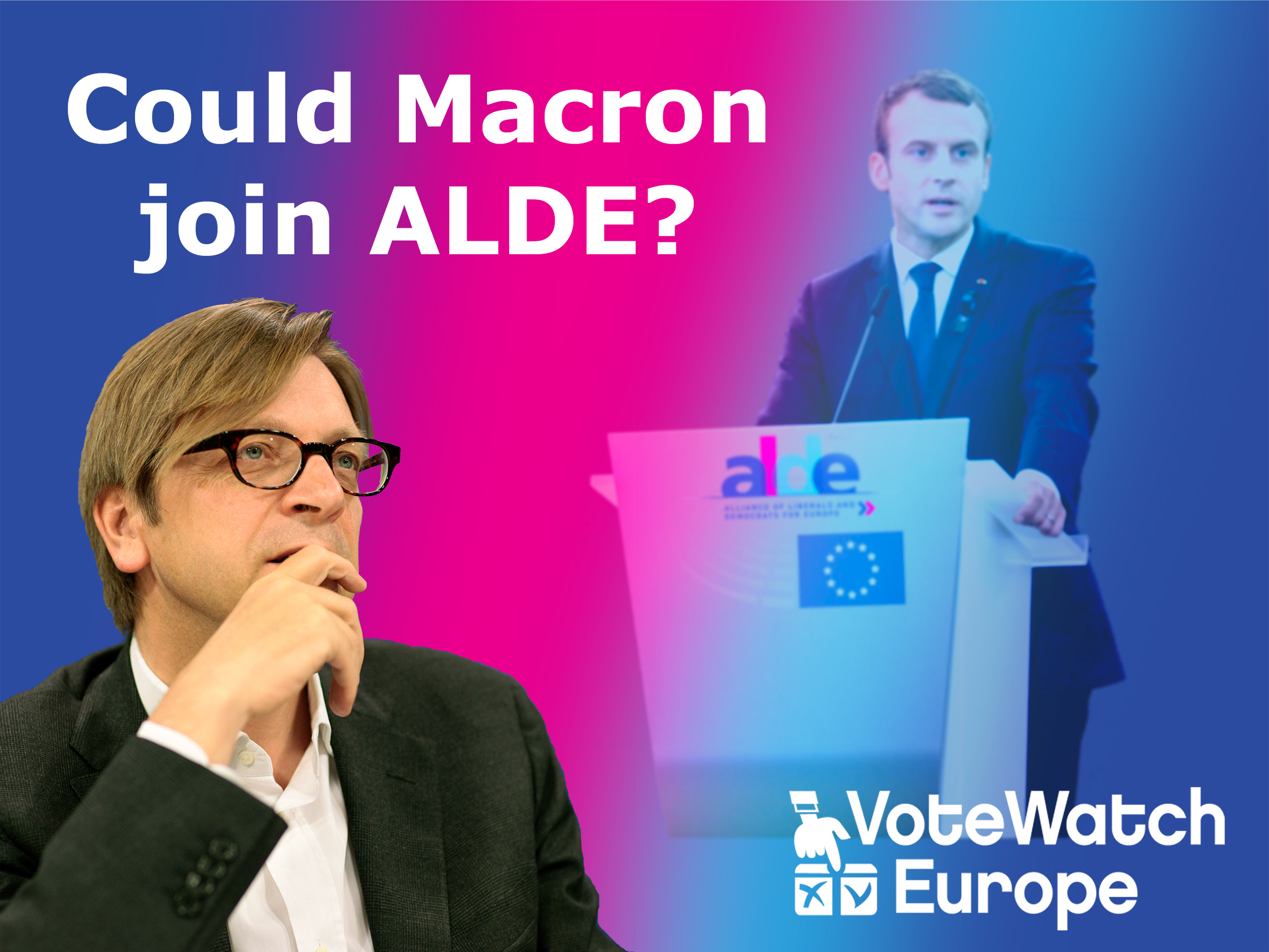 ‘‘European Liberals seek champion for upcoming elections’’ would not be out of place among the latest job openings on the website of the Alliance of Liberals and Democrats for Europe (ALDE). For the European centrist family, it is indeed crucial to lead a decisive campaign in 2019 to gain weight on the European stage and to finally emerge as a leading force rather than remaining stuck between the right-leaning EPP and the left leaning S&D. In 2017, ALDE eyed a promising candidate for the job: French President Emmanuel Macron.

If his movement, La République En Marche (LREM), were to join the ALDE group, this will boost the strength and the outreach of the centrist force in 2019. However, the group will also have to ensure a high level of internal cohesion in order to exert more influence at the European level. Some of Macron’s proposals (in particular on trade and taxation) clash with the views of the most ardent supporters of free-market within ALDE (such as the German Free Democratic Party and the Dutch People’s Party for Freedom and Democracy). How compatible are Macron’s views with ALDE’s? Based on their actual votes in the European Parliament (not mere statements), we assessed the level of support by ALDE Parliamentarians for key Macron’s proposals. This report maps the main differences and commonalities between the two potential partners.

From his stunning victory in the French Presidency to his deep pro-European stand, Emmanuel Macron is likely to be a decisive figure in the future direction of the European Union. A vocal member of the European Council, the French President has been the subject of countless discussions on the future of Europe. But Macron strikes also by his apparent lack of political affiliation, disrupting the usual progressive/conservative European cleavage. His 19-months old movement, La République En Marche, positions itself as a centrist force, though its motley composition is difficult to reduce to a simple ideology.

On the European stage, the French President is understood as an independent player, an affiliation-less Head of State. His popularity does not however exactly suffer from his political positioning, and some European leaders count on him joining their political family very soon. Betting on his unashamed pro-European profile, and his resolve to reform France (by adding a dose of liberalism to the French formula), ALDE members do set their hopes high on Macron joining their group in the European elections in 2019.

The next European Elections could indeed mark a departure from the Grand Coalition between EPP, S&D and ALDE that prevailed until then at European level. Because of the worsening electoral performances of Social-Democrat parties across Europe, the left-leaning S&D is looking for a way out of the current arrangements with the right-leaning EPP (for the most likely scenarios on the future of the centre-left group, check our X-ray report on the matter). Should Macron keep momentum till 2019, then ALDE could perhaps take on a more important position at the European level. 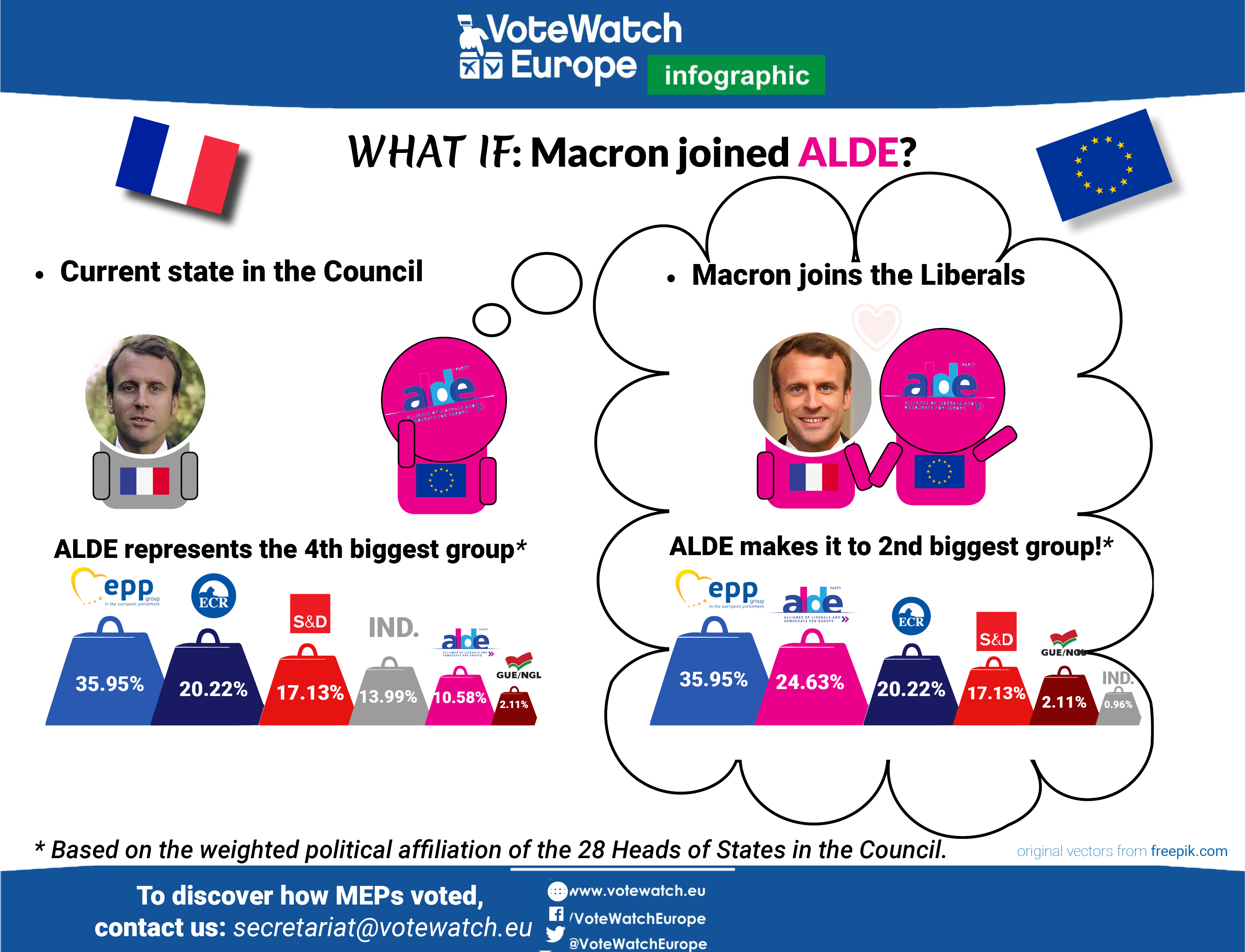 So a liberal French President boosting the clout of a centrist European group? Not so fast, as many factors could thwart Macron’s supposed compatibility with the ALDE group. Being the leader of a protectionist country, Macron is less free-market oriented than the right-leaning liberals within the group. By examining how both Macron and the current ALDE’s MEPs positioned themselves on key issues, we can start to piece together the common grounds they share. From trade to Eurozone reform, 2017 hasn’t been devoid of compelling subjects for the European policymakers. This report will examine to what extent Macron and ALDE agree with one another, and whether they could be able to establish a coherent alliance in the next EP.

This analysis is part of a series of reports that map the positions adopted by Members of the European Parliament (see our previous report on MEP Pietikäinen, MEP Rolin and MEP Terricabras), national parties, and political groups (we already conducted an X-ray of the ALDE and S&D groups). VoteWatch will provide extensive research into the positions and work of EU Parliamentarians at an increasing frequency between now and the 2019 European elections.

For starters, let’s point out that, as the President of France, Emmanuel Macron is supposed to defend the core interests of his country. Which might lead to hushed clashes with the positions of other ALDE members. To illustrate such a divide, we can turn to the recent reform of posted workers. As France is one of the main host countries for posted workers in Europe, one of Macron’s campaign promises was to address the increasing competition between French workers and posted CEE workers.

Macron fought for restricting the length of secondment of workers to 12 months, unlike the 24 months put forward by the European Commission. Macron had his way during a session of the Council, putting him at odds with ALDE. Working on the position of the European Parliament, ALDE shadow rapporteur, MEP Martina Dlabajová managed to unite her group on a duration of posting period agreed as 24 months. However, this was hardly the ideal outcome for the group. Previously, ALDE had been quite divided over whether to revise the Posted Workers rules at all, with only Belgium, French and Spanish MEPs supporting a revision.

Another change impulse by Macron could concern the harmonization of the corporate tax base for all Eurozone Member States. If, for the French leader, strengthening the economic and monetary union implies sharing a renewed set of fiscal rules (to be proposed yet), ALDE MEPs on the other hand could just agree on a broader pledge to support further tax harmonization at the EU level. A step in the same direction, but not as demanding as the proposals of the French President.

More protectionist policies are likely not to be followed by ALDE, despite Macron’s insistence. Macron’s ideas such as a “Buy European Act” and his hard-line position on Chinese aggressive trade practices are unlikely to strike a chord with the free-trader voices in the group.

But the glimmer of an understanding appears on a topic close to the French leader, the one of reform. Does it follow through in other policy fields? 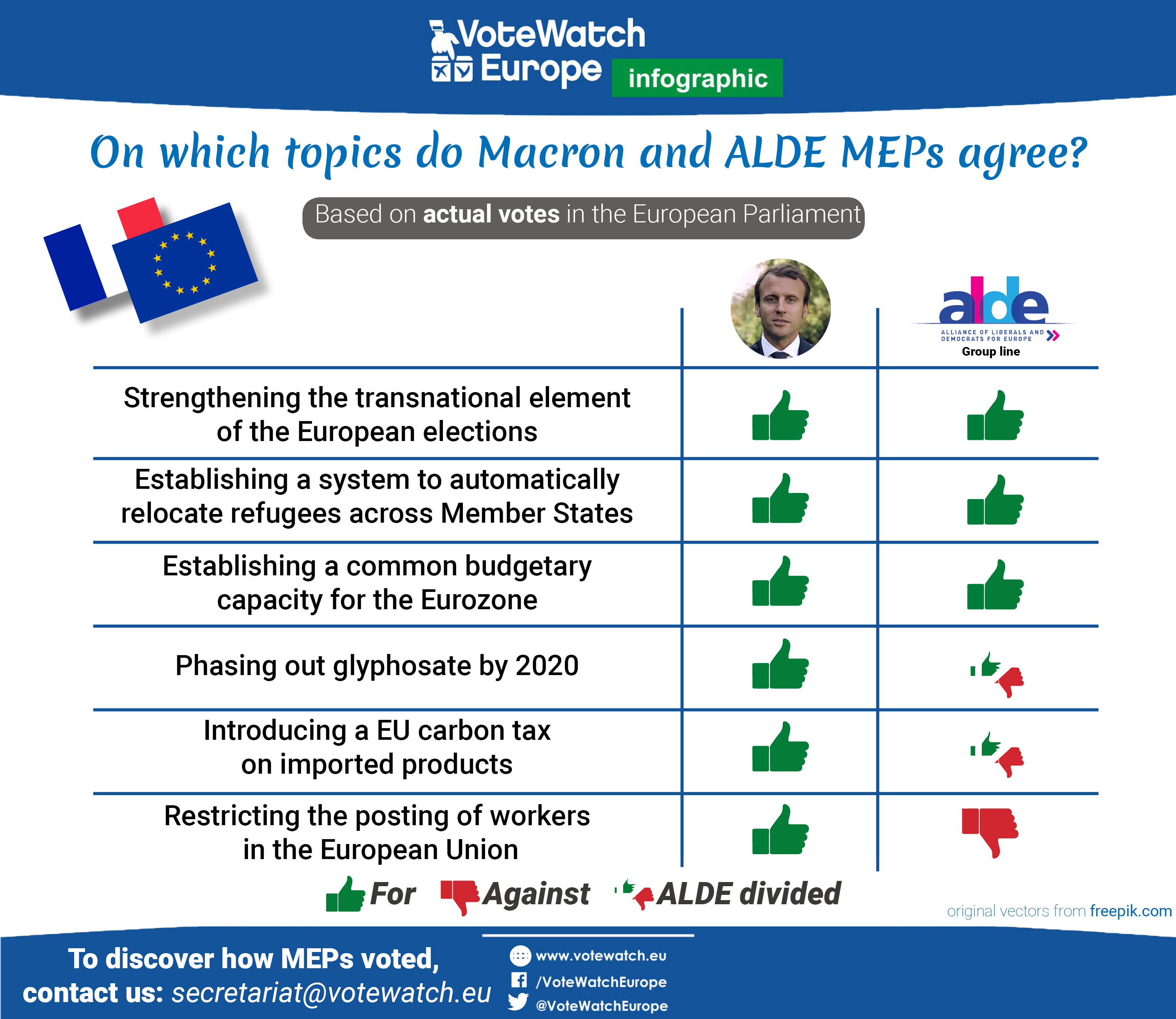 On glyphosate and carbon tax, uncertain attitude from ALDE

On most practical issues, Macron and most ALDE members share common beliefs. But the ALDE group does not always manage to bring all of its members to the same table. The group is indeed quite torn between, for example, the German, Dutch and Czech free marketers and the more interventionist French and Belgium members. Incidentally, this allows us to witness which national parties tend to be closer to Macron’s positions.

Take the ‘’glyphodrama’’ that engulfed the Council in November 2017. It opposed pro and anti-glyphosate renewal States, with the latter group led by France. The decision by the Council to authorize the controversial weedkiller prompted the French President to announce his own decision to phase it over the next years. The ALDE group was split when the European Parliament voted on the issue. When it comes to the regulation of potentially hazardous substances, should Macron join ALDE, he would surely give weight to the more cautious side of the discussion. However, more clashes could be coming in the next Parliamentary term, with the expected strengthening of the more right-wing members of the group, such as the parties led by the Dutch PM Rutte, the Czech PM Babiš and German Lindner.

The introduction of a carbon tax is also a divisive topic within ALDE. While Macron declared to support a carbon border tax adjustment, based on the price of carbon in the EU emissions trading system, in his Sorbonne speech, the ALDE has not managed to strike a position as clear. In the EP, the most free-trader members have fiercely opposed proposals to call on the European Commission to establish a carbon border adjustment scheme.

Which conveys that a potential LREM’s membership of  ALDE could tilt the current fragile balance of powers within the be group, depending on the issue.

Finally, let’s look at study cases suggesting a broader understanding between Macron and ALDE. The creation of pan European lists for the 2019 European elections, for example, was supported by both. Following Brexit and the 73 MEP seats left empty as a result, both Macron and ALDE leaders called on the establishment of a fully-fledged pan-European constituency for electing MEPs. Back in 2015, ALDE already supported a proposal to reform the EU electoral law aiming at strengthening the visibility of pan-European political parties (as well as their political platforms) during the electoral campaigns.

Reforming the Eurozone was among Macron’s numerous bids, for the French President took a position in favor of a common budget. An early 2017 vote in the European Parliament saw the ALDE supporting the introduction of budgetary capacities for the Eurozone. Its position aligns with Macron’s views, save for the usual suspects. Czech, German and Finnish ALDE members did not conceal their skepticism on such a proposal. FDP famously expressed caution for Macron’s passionate proposal for a common budget, a position he stressed during his Sorbonne speech in September 2017. So, if LREM decides to join ALDE, Macron’s MEPs will have to deal with the Liberals that almost brought down Angela Merkel.

Finally, Macron and ALDE have common views on the European asylum system reform. The French President talked about revising the system in place during the refugee crisis, while ALDE is a staunch advocate for the establishment of making the Member States responsible for examining the application of refugees or stateless person.

These cases display the compatibility between Macron and ALDE. If the French President were to join the group, he would certainly give a brand new impulse to the centrist group. With such an influential figure among its ranks, ALDE could in return upgrade its position within the European Parliament.  A deal beneficial for both parties? That’s something ALDE members may be expecting with eagerness.

However, disagreements between Macron and the ever more vocal right-leaning members of the ALDE group will remain a key obstacle towards a harmonious cooperation between the two potential partners. Macron might still opt for some other options, such as forming a new group encompassing centrist political forces (Matteo Renzi’s Democratic Party could allegedly be interested in joining such a group). However, given the tight requirements on the formation of political groups in the European Parliament, this option is not risk-free either.

In any case, in one way or the other, the propulsion of Macron’s movement is likely to shake the fragile equilibria within the European institutions as of 2019.

If you are interested to know more about the future political developments in the EU, the positions of the European groups and the individual EU Parliamentarians, or simply to find out who and how is shaping EU politics in general, contact us at [email protected].