The Commission proposed to temporarily raise diesel car emission limits by up to 110% as part of a package to introduce the Real Driving Emissions (RDE) test procedure. The leftist Members objected, arguing that the plans to relax the limits would weaken the enforcement of existing EU standards.

The camp that opposed the Commission’s move. made up by the Socialists, Greens/EFA, radical-left GUE-NGL and most of the liberal ALDE Members gathered only 317 votes, which is 6 votes less than those rallied by the EPP and ECR groups who backed the Executive’s initiative. Interestingly, the 3 MEPs coming from President Juncker’s Christian Social Party of Luxembourg sided with the left, against their EPP group line (and against the Commission’s proposal).

On the other hand, nationalist MEPs from the far-right group of Marine Le Pen and the UKIP members backed Commission’s proposal.

Most of the Socialist EU Parliamentarians wanted to reject the Commission’s proposal. However, the group was split, with nearly 30 MEPs, mainly from the Czech and Spanish delegations, abstaining, while the Polish, Slovakian and the majority of Romanian Members even voting against. The Liberal group was also divided, with the majority in favour of the objection, while 20 ALDE Members from the Czech, German, Spanish, and French delegations opposed. The Greens and the Radical-left MEPs were all in favour of vetoing the Commission proposal. 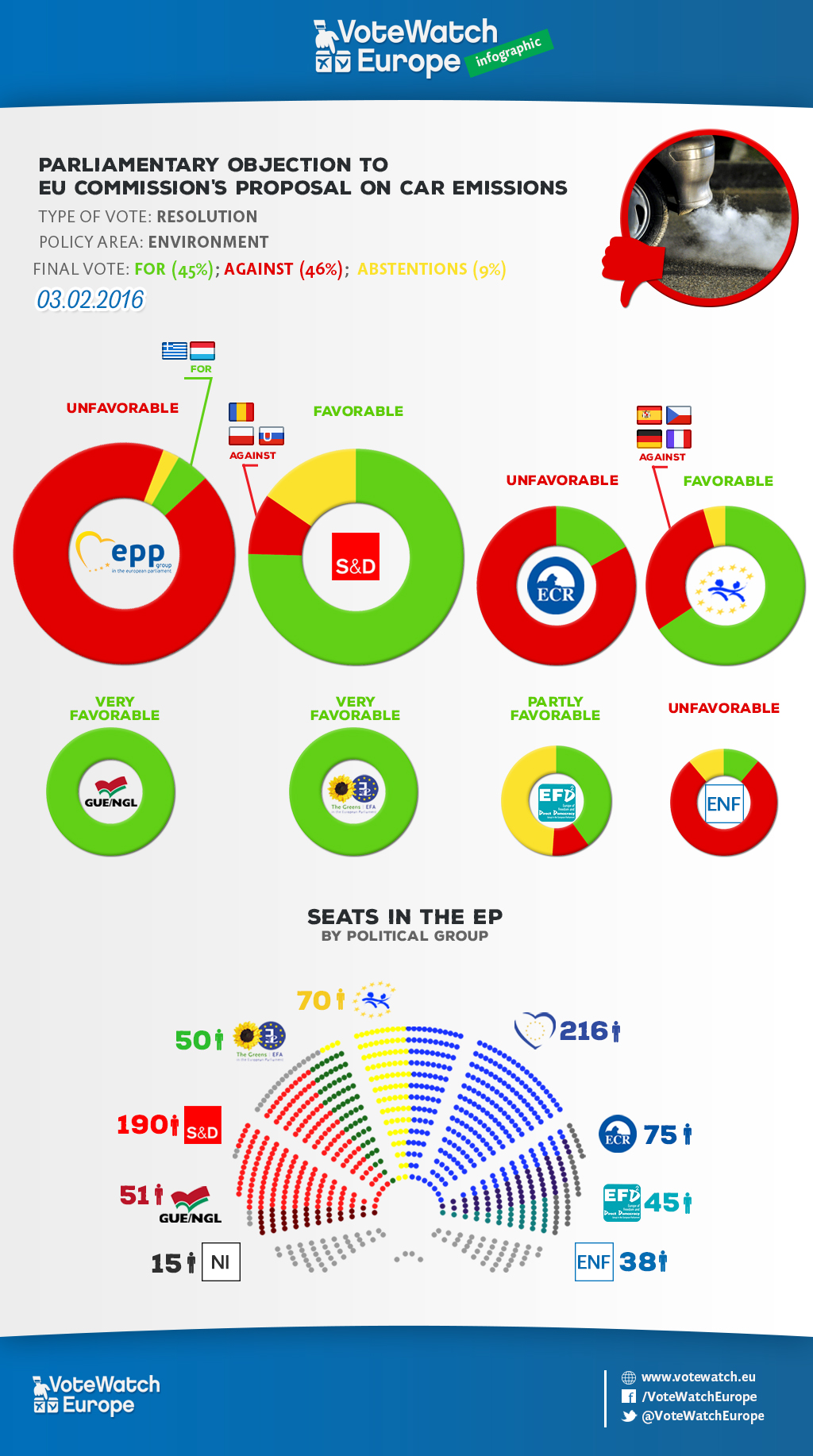 In order for the Commission’s proposal to be rejected, a qualified majority of MEPs (376) would had to object (under the regulatory procedure with scrutiny which applies to delegated acts).

What the new regulation says:

In its proposal, the EU Commission raises the car nitrogen oxides (NOx) emission limits by up to 110% for new models by September 2017, and for new vehicles by September 2019. In this regard, the parliamentary motion opposing argued that NOx are major air pollutants which cause may important diseases and environmental degradation and that diesel vehicle exhausts are a major source of NOx in urban areas in Europe.

The EU Parliamentarians wanted to call on the Commission to withdraw the draft proposal and submit a new one no later than 1 April 2016, in order to introduce RDE test for all vehicles to ensure the effectiveness of emission control systems. However, many members decided not to veto the proposed regulation because the EU Commission promised a review clause and published a proposal for a long-term reform of the EU approval regime for cars.

The new RDE procedure for new cars and vans is designed to make emission tests more realistic since the laboratory-based procedure used at the moment has many flaws that carmakers use to brand their products as cleaner than they really are. Like it was the case in the Volkswagen revelation.

Interpretations of the EU Political groups

European People’s Party (EPP), the political family of President Juncker and Chancellor Merkel, voted against the objection since it would have left the EU without no new rules and thus in a worse situation in bringing down the emissions in the future . The group is of the opinion that the proposed regulation paves the way for better emissions test rules for cars. “The European Parliament has taken a pragmatic decision. While the agreement is far from perfect, the adoption allows for a swift implementation of on-the-road emissions tests. It offers an effective way to cut air pollution by diesel cars significantly in the short term ”.

The European Conservatives and Reformists group (ECR), David Cameron’s EU political group, did not support the rejection. The group believes that “a rejection would have seriously delay the new tests and tangible improvements, as Member States would not bring forward a revised proposal .”

The Greens/EFA group was in favour of rejecting the proposal and urged the Commission to come back with a real driving emissions test with no exemptions .