END_OF_DOCUMENT_TOKEN_TO_BE_REPLACED

1. MEPs agree on simplified procedures for people moving to a different EU country
2. A renewed call for EU roadmap against homophobia
3. MEPs approve rules on music copyright
4. The EP supports the recovery of the EU steel industry
5. MEPs in favour of binding climate targets
6. EP approves revision of air passenger rights rules
7. The EP adopts legislation regarding non-EU seasonal workers rights
8. The EP calls for stricter rules of meat labelling
9. MEPs assess progress made by Bosnia and Herzegovina, Montenegro and FYROM in 2013
10. The EP supports Ukrainian citizens’ rights to decide on their geopolitical orientation

END_OF_DOCUMENT_TOKEN_TO_BE_REPLACED

Open letter to Members of the European Parliament:

END_OF_DOCUMENT_TOKEN_TO_BE_REPLACED

In the end of 2013 the European Parliament adopted a key legislative document, which sets out the EU’s priorities in funding major cross-border energy, transportation and telecommunication projects, in the framework of its next multiannual budget: The Connecting Europe Facility.

This policy brief analyses votes on energy that were cast in the 2009-2014 term, giving an overview of the priorities of the outgoing Members of the European Parliament. Continue Reading

This special VoteWatch Europe report shows how the the 3 declared candidates to the January 2012 EP presidency elections, Nirj Deva, Martin Schulz and Diana Wallis voted on a set of key issues that have gone through the EP in the first half of the 2009-2014 term. It also shows aggregate statistics on participation to votes, representativeness and matching of policy preferences. Continue Reading 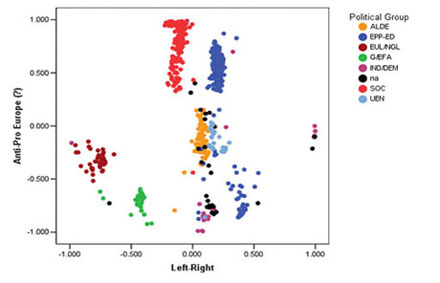 In this paper Simon Hix and Abdul Noury look at patterns of MEP voting and party behaviour in the first half (July 2004 to December 2007) of the current European Parliament. Despite the addition of 10 new member states, voting in the European Parliament is still primarily along transnational party lines rather than national lines. Nevertheless, the MEPs from the new10 member states do sometimes vote differently from their colleagues from the old15 member states, as was the case on the Services Directive. Continue Reading