VoteWatch Europe’s director & co-founder, Doru P. Frantescu, has revealed in an interview with the Spanish publication El Espanol that, from the ideological perspective, Spanish Socialist Party (PSOE) is much closer to Ciudadanos and Partido Popular than to Podemos. The conclusion is based on the analysis of the voting records of all Spanish Members of the European Parliament.

Since the elections of 20 December, Spain has been in political deadlock as none of the parties has been able to reach a majority and various combinations for coalitions are therefore being explored. One possibility is a centrist super-grand majority, between PP-PSOE-Ciudadanos, while the far-left Podemos is hoping for a leftist coalition with PSOE (which would mirror the developments in neighboring Portugal).

The composition of the new Spanish government is highly salient for the EU as a whole, as Spain is one the largest EU economies and its views weight substantially in the EU Council. Podemos is against the finalisation of the economic and political Union, against capital markets Union and against TTIP.

But what is the difference between the new and the old parties in Spain? What do they really stand for and which direction will they give Spain? We have made an in-depth analysis into what these parties have stood for in the past year in a half. We have looked at facts and not at electoral promises. We have studied the voting and activity behavior of the representatives of the Spanish parties in the European Parliament, a place where they had to deal with a broad range of issues.

The infographic below summarises the positions taken by the Spanish Members on 20 key issues debated and voted upon in Europe. This is a purely informative tool (with no value judgments) to show what kind of policy dilemmas the EU politicians have to deal with and how each party sees things.

Notes: we have included only parties who have more than one Member of the European Parliament. To check the details of the votes, click on the “annex” at the bottom of the infographic.

To check the details of these votes, please access this Annex.

We have also looked at the big picture and measured the overall level of agreement between any two Spanish parties, based on totality of votes that they cast in the European Parliament (over 2.000 votes since the start of the current EP term in July 2014). Here is what we found: 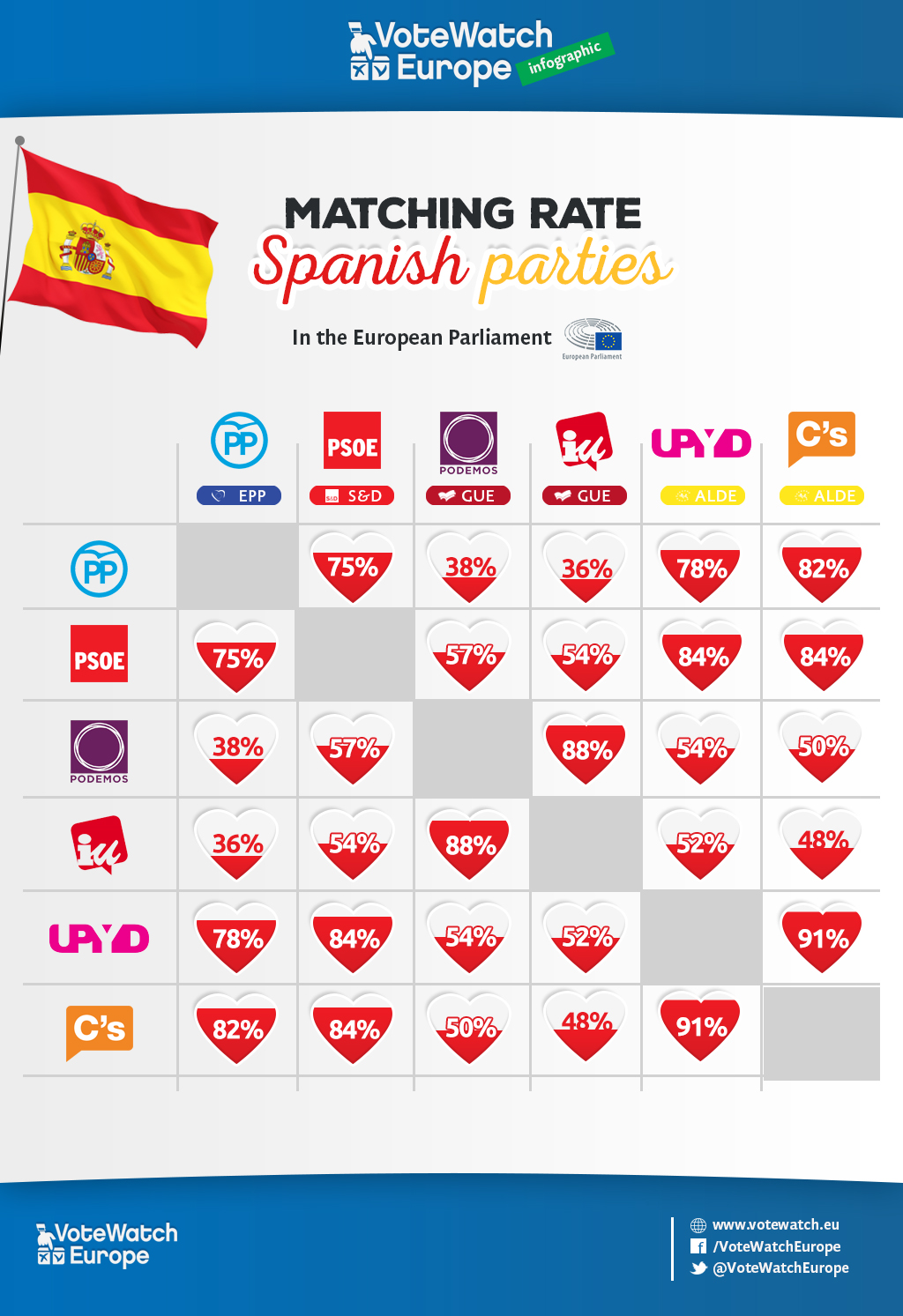